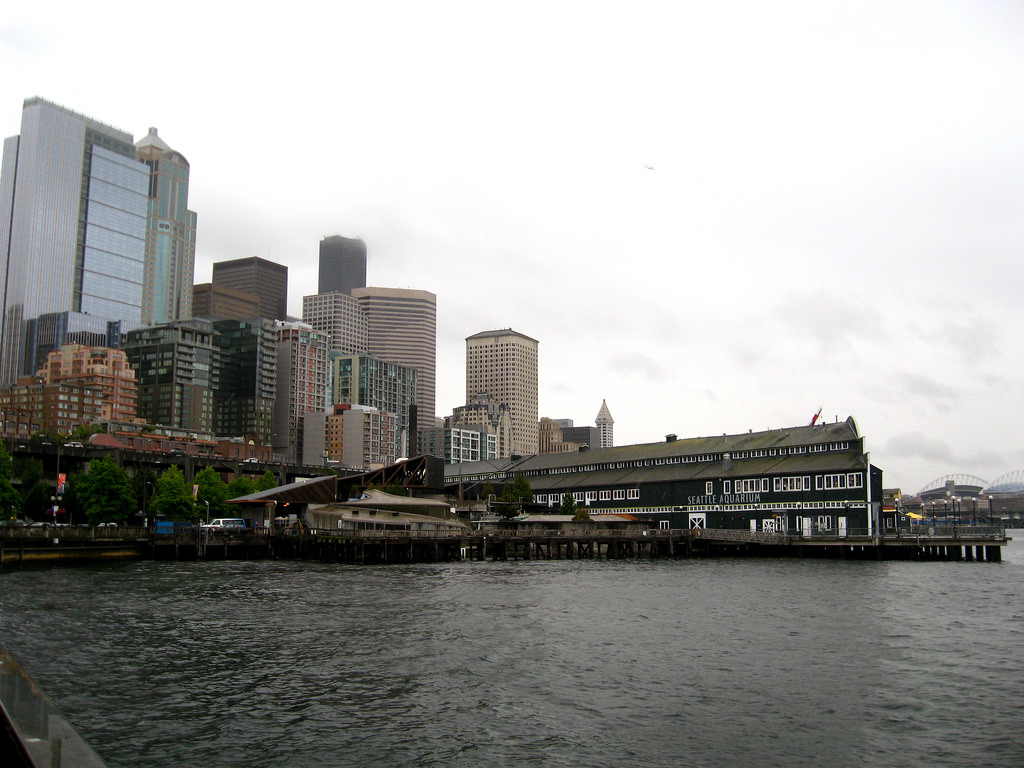 Sometime after 2020, Seattle will wake up to a spanking new waterfront. Assuming Bertha finishes her work, the Alaskan Way Viaduct is replaced with a new street-level boulevard, the new seawall is finished, and the James Corner-designed “waterfront for all” park is completed, it will signal a massive transformation of the place where Seattle meets the sea.

Still, one of the most difficult tasks lies ahead: The new waterfront will likely invite rebranding for the 21st century, which could include renaming the thoroughfare that will run along it.

What will we call the new stretch of waterfront? San Francisco has its Embarcadero; New York City, its Battery; Shanghai, its Bund. Coming up with a new name for our Puget Sound front porch and the new ground-level avenue that will run along it seems like a no-brainer, but if history is any guide, the task could be as fraught as any undertaken so far.

Dial back the clock to the late 1920s. Seattle’s waterfront was unpaved — a beat-up plank road ran its length. There was no modern seawall — the street was built over the water. Train tracks were everywhere — in fact, the main drag was accurately called Railroad Avenue, as utilitarian and unglamorous as the port. But the waterfront was undergoing a massive renovation. A seawall was being constructed, the shoreline filled in, the road made into a wide, paved boulevard. Before we had an airport and commercial flight replaced steamships, this was our Sea-Tac — our main connection with the other continents. The new waterfront, it was thought, could showcase the city’s sophistication and international connections.

In 1932, a longtime maritime businessman named Carl Sunde said in The Seattle Times that the new waterfront needed a new name, one that “would make our waterfront known all over the world.” The city’s Maritime Association decided to hold a contest soliciting ideas. More than 5,000 names poured in and were whittled down to four finalists: “Puget Portal,” “Klatawa” (Chinook jargon for “travel”), “Hiak” (Chinook for “lively”) and “Maritime Avenue.” Perhaps not surprisingly, the Maritime Association picked Maritime Avenue and said it would petition the City Council to make it official.

Oh, but Seattle process could not allow things to be so simple. Up jumped George D. Root, a man with maritime shipping connections and a bee in his watch cap.

Described in the Times as “a tireless worker for a more distinctive and descriptive name for the waterfront,” Root came up with a unique, original and possibly out-of-this-world name. What about “Cosmos Quay”? Some liked it. One reader enthused that it “smacks of faraway places; of the cosmopolitan nature of the persons, goods and ships found there. … Once heard, not easily forgotten.” Debate and ridicule also ensued. Some said it sounded too flowery. Why not name it “Rose Road,” “Lily Lane” or “Violet Way”? asked the Times. Others objected to the word “quay” — how was it pronounced anyway: kee, kay, qway? Seattleites duked it out in the letters pages of the newspapers, but Root got the Seattle Board of Public Works to endorse his idea.

By 1935 — three years after the renaming was proposed — the City Council took up the matter. Unofficially, the council appeared to be leaning toward Cosmos Quay, but was also thinking about “Seven Seas Road” and “Maritime Drive.” As the council prepared a naming ordinance, Cosmos Quay support began to slip — the Maritime Association was vigorously opposed — and the Chamber of Commerce suggested yet another contest. Finally, the council decided to table the idea, in the words of one council member, to “turn its time and attention to the more pressing problems confronting the city.” It was the Great Depression, after all.

The city stepped in, and the mayor, John F. Dore, appointed a committee to oversee a new contest. After a zillion more suggestions, by 1936, the City Council seemed to favor the relatively innocuous “Pacific Way.” The council met to vote on an ordinance renaming Railroad Avenue as Pacific Way. But at the last minute, a group called the Alaska-Yukon Pioneers spoke up and demanded the road be named “Alaskan Way” to memorialize the fact that the Klondike gold rush launched on our waterfront.

Someone scratched out Pacific Way and scribbled in the new name, and the ordinance passed. Cosmos Quay advocates were disappointed and petitioned for a do-over, to no avail. Finally, in 1938, a bunch of Alaska gold rushers and a beauty queen rechristened the new Alaskan Way with seawater.

The saga is familiar to anyone experienced with Seattle process: business interests pushing an agenda, the public jumping in to offer abundant input, a guy with a wild idea to make us world class, city council waffling, then a decision out of the blue followed by a petition to undo the whole thing. It took more than five years just to name and dedicate one street!

The “new” waterfront of the 1930s was named to honor the past: the Alaskan gold rush. Its future was foreshadowed at the dedication when Mayor Art Langlie “predicted that eventually a high-speed overhead roadway would be built over Alaskan Way to carry cross-town traffic.” That came to pass in the 1950s, and the rickety “speedway” will be coming down soon. We’re on to a new chapter.

So, is it time to reconsider Cosmos Quay?

With any luck, we might make a decision by the time the new waterfront is done. Or maybe not.

This column originally appeared in the June edition of Seattle Magazine.