The picture is by now familiar: Many tech companies are very white and very male. Women leave tech companies at a higher rate than men. Fewer blacks and Latinos with degrees in tech-related subjects get hired, and those who stay too often feel isolated.

The Washington Technology Industry Association decided to take a look at who, exactly, is working to change that bleak status quo.

The group found 55 local and national organizations that are working in Washington to address disparities in K-12 education and higher education that influence who gets jobs in tech, and to provide support for career switchers and at the professional level.

But they also found that, while there are a number of programs in the state aimed at getting younger girls and women into technology, fewer focus on preparing and recruiting black and Latino people into the field.

Michael Schutzler, the CEO of the WTIA, said that until a few years ago, most local companies were neither aware of, nor actively trying to address, the lack of diversity in the field. Bigger companies like Amazon and Microsoft had started to take notice, he said, but “we as an organization were not aware of how bad it really was.”

A visit from civil rights activist Jesse Jackson in 2014 led the WTIA to reflect on the issue, Shutzler said. Jackson made a tour of local tech companies and drew the connection between the lack of educational and economic opportunity for minorities and protests in cities such as Ferguson, Missouri, where Michael Brown had recently been killed. Jackson told the Seattle Times that companies like Amazon were “boycotting our talent.”

And so WTIA set out to figure out who, exactly, was already doing the work so gaps would become clear. He said the WTIA was “pleasantly surprised” to find dozens of organizations already focusing on the issue, and that he hoped that sharing the list would remind tech companies about the resources available to help them recruit and retain employees from groups that are currently underrepresented in the field.

The pre-K-12 programs include organizations such as Washington MESA, a nonprofit with the broader mission of increasing representation in all STEM fields, and Girls Who Code, a national organization focused on gender representation in computer science. Most are programs that supplement in-school offerings through camps or afterschool activities.

The college programs include the Washington State Opportunities Scholarship, a unique public-private program that offers scholarships for students who hope to pursue careers in high-needs fields, and the Bright Futures Program, which focuses on vocational education.

The career transition programs include 16 “boot camp” style programs aimed at helping people learn tech skills in order to switch careers, and WTIA’s own apprenticeship program. Most of those programs are less than five years old.

The retention-focused programs highlighted include longer-standing interest groups and affiliation groups, such as the National Society for Black Engineers and the American Indian Science and Engineering Society, which provide mentorship and professional resources for their members.

The list is certainly not a comprehensive directory of people working on diversity in STEM in Washington State. Individual schools and professors also have programs aimed at helping different communities prepare for and access careers in technology, including the University of Washington’s Institute for Science & Mathematics Education and Heritage University, which has an effort focused on building cultural competency among future teachers of Native American students.

But despite this flock of diversity-in-tech initiatives, the “abysmal” statistics WTIA noted are still real. In May, the federal Equal Employment Opportunity Commission released a report on diversity in the tech sector that noted that the field is less diverse than the private sector as a whole. The report highlights several points at which the “pipeline” preparing underrepresented groups for tech careers seem to break down: While 9 percent of graduates at the top 25 computer science programs are Black, Latino or Native American, those graduates make up 5 percent of employees at larger tech firms.

That’s particularly striking, as tech workers are young — a recent report found that the median age at Twitter and Facebook is in the late 20s — and part of a generation that’s more racially and ethnically diverse than the country as a whole.

With all of these groups working on pieces of the puzzle, Stacie Gregory, a research fellow at the American Association of University Women who focuses on socioeconomic diversity in STEM fields, especially engineering, said that it’s important to ask how realistic and successful each of the efforts is.

Gregory said that efforts to increase the diversity in STEM fields are critical, both for tech companies and for the groups that are currently underrepresented at the companies. She pointed to research that indicates that more diverse teams are able to problem-solve more efficiently. And for young people, she said, “it’s a social justice issue. You have a population that’s not being tapped into.”

But she said it’s not as simple as saying you want a more diverse workforce. Too often, groups ignore the real challenges facing the demographic groups they’re trying to recruit, she said. Students may lack role models in the field or an awareness of the career options that can come from studying STEM. Others may have attended schools with few resources, or may be far behind academically. Programs or teaching approaches may not be culturally relevant to the students they’re trying to reach.

“We need organizations that are aware of what they’re trying to tackle,” Gregory said. “Too often there are unrealistic goals at the beginning and no way to measure success.”

Elese Washines, an assistant professor of teacher education at Heritage University and an enrolled Yakama tribe member, said that those working with Native students, for instance, too often don’t have an understanding of the cultural background that informs attitudes toward learning and toward careers.

She said careers in science and technology are often promoted to students as having strong individualistic benefits — you will improve your quality of life! — that might not resonate with some Native students.

She said that among her students, she focuses on how careers in science and technology can help students use their strengths and serve their people. She said she looked for examples that show “how STEM is part of service.”

Meanwhile, one Washington engineer who taught in public schools for five years described being asked to do engineering projects with high schoolers who couldn’t add fractions. While the projects were engaging, they didn’t necessarily help students catch up on the math knowledge they needed to become engineers.

And Naria Santa Lucia, the executive director of Washington State Opportunity Scholarship, said that while education and training programs are important, none of that matters if companies aren’t actually hiring and working to retain diverse candidates. “You have to make sure that industry’s giving everyone a fair shot, too,” she said. “We are producing students who are diverse.”

Jaclyn Zubrzycki is Crosscut's education correspondent. She is a contributing writer at Education Week, and has worked in schools and written about local and national issues in education from Washington, D.C., Memphis, and Denver. Follow her on Twitter @jzubrzycki. 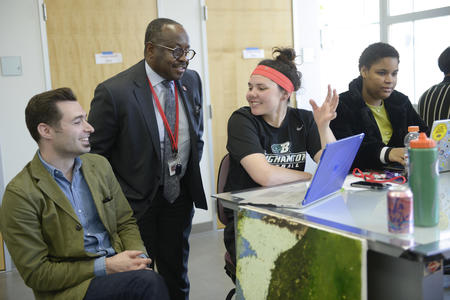 How this 'preacher of the arts' plans to save Cornish College

The Seattle art school's first Black president is on a mission to revamp the century-old institution.