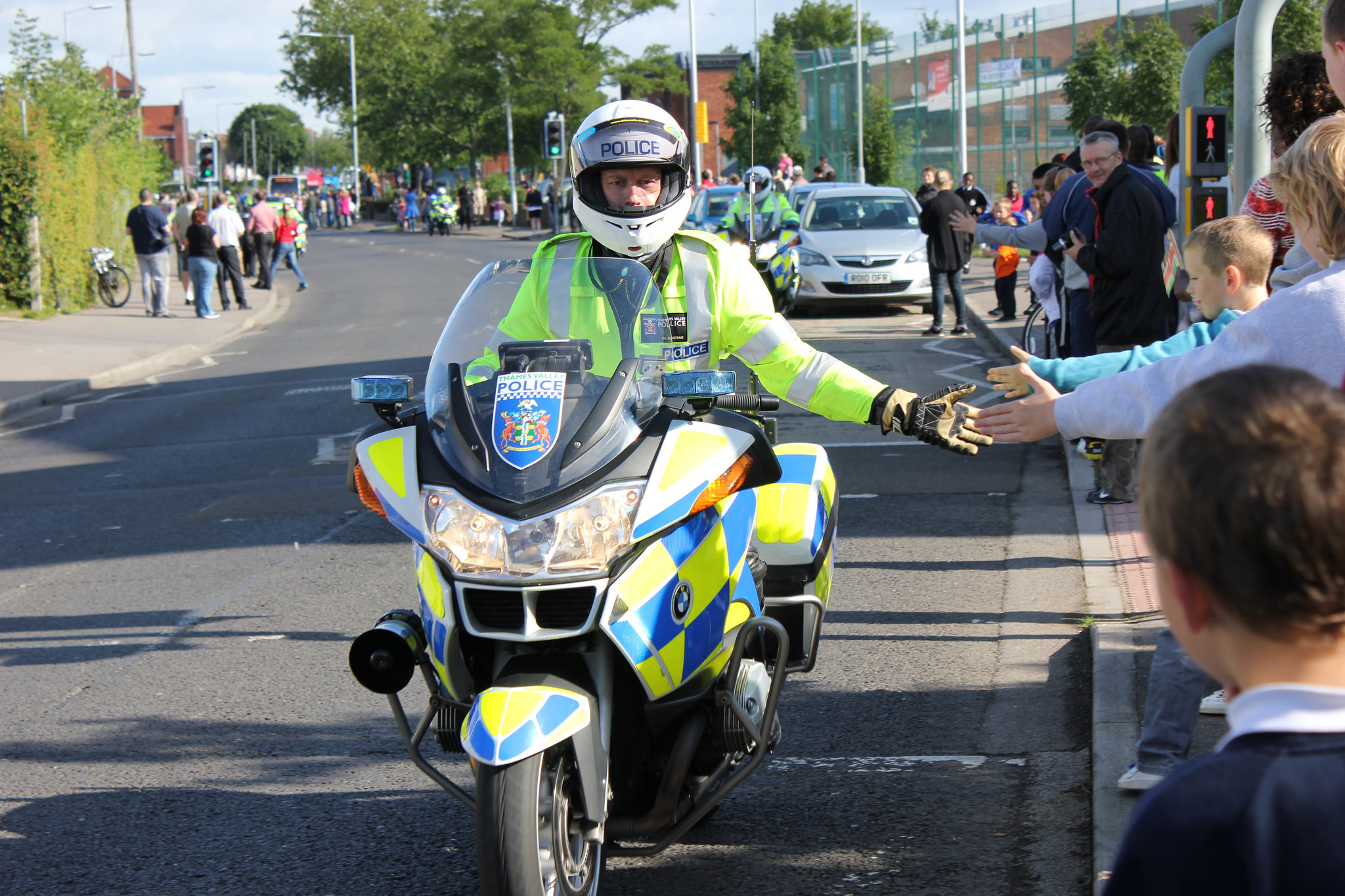 An officer in the United Kingdom: Europe has much lower rates of violence involving police.

A story from abroad, which I heard from a friend at a party the other night, points to ways of understanding police work here that could lead to better conditions both for communities and the police themselves.

The friend was in Glasgow at night, where an elderly man stood pounding a pub door and shouting, obviously drunk and upset about being kicked out. Two police officers walked toward the man until they stood facing him together, where he could see them both at the same time. Calmly and sympathetically they talked with him until he left off pounding the door. My friend noticed that after a minute the officers each took a step away from the pub, which the man automatically followed, still engaged in conversation. A few more deliberate steps later, all three had shared a laugh or two. Then the man left for a quiet walk home.

My friend approached the police to compliment them. “I’m from the States,” he said. “I would like to see more policing like this at home.”

One of the officers, a woman, answered, “That man is somebody’s grandfather; he’s just had a drop too much to drink.”

American police, of course, do well by people, helping homeless teens, playing hoops with neighborhood kids, creating chess tournaments. And they risk their lives for the public. Sometimes, as in Dallas, they die protecting peaceful protesters or, as in Baton Rouge, responding to a call for help.

But the American public faces terrible uncertainty whenever police are called, because Americans die in encounters with police at rates unheard of in the United Kingdom and Europe.

What is our problem? Racial disparity clearly factors into it. A recent Vanity Fair review of available data found overwhelming evidence that black Americans face harsher, scarier treatment than white Americans receive from law enforcement. But racism isn’t the only cause; according to a sociological study, a non-Latino white American is 26 times more likely than a German to be shot and killed by police.

There is no reason to think that police officers themselves are the root of the trouble. The problem is systemic. According to Norm Stamper, the 34-year police veteran and former police chief of Seattle (whose book, To Protect and Serve, I recently reviewed for Crosscut), police officers in the U.S. are failed by a paramilitary, bureaucratic system that places them in danger but doesn’t adequately prepare or support them.

It is the problem of 50,000 SWAT raids per year, most of which are employed to serve drug-related warrants in private homes, compared with only 3,000 SWAT deployments on average in the early 1980s. The emphasis on this kind of aggressive, militarized policing puts the officers in high tension situations, one in which trauma constantly lurks not just for the public but for them as well.

Recent U.S. wars are returning home to communities in the form of surplus military weapons and other gear given to police departments. In the attacks on police in Dallas and Baton Rouge, the assailants were veterans of war in Afghanistan and Iraq.

The evidence for good police work is often negative--an absence of a fresh tragedy, an avoided arrest. That's important to keep in mind if we want to look at deeper forces behind police violence in America: war, militarization and more are essentially the nature of trauma.

As a psychotherapist, I’ve learned a few things about trauma.

One, it has a way of repeating itself. Sigmund Freud first recognized this as a psychological syndrome, and today neuroscience researcher Bessel Van der Kolk explains that the brain and nervous system process traumatic memory differently than other memories. Trauma, by definition an experience that overwhelms, can be encapsulated in sensory fragments, detached or dissociated from ordinary memory. With trauma, we don’t remember episodes and stories; we alternate between numbness and bursts of terrifying intensity.

Two, we can’t think our way out of trauma, because its intense emotions are phenomena of the limbic, emotional brain, which we do not consciously control. If you’ve ever tried to tell yourself not to be afraid of whatever irrationally frightens you — airplanes, or spiders, or dark closets — you know the limits of self-talk on the human amygdala. But the fear can sometimes be eased by the sight of a friendly face or the sound of a calm voice.

Three, healing from trauma is a complex process. According to behavioral neuroscientist Stephen Porges, one of the key questions is why certain nervous-system adaptations — especially dissociation, whose extreme forms can include fainting — persist long after the traumatic incident.

Porges has developed a theory useful not only for developing better, more effective trauma treatments, but also for addressing larger questions such as violence between police and communities.

Once a person has experienced trauma, which Porges defines as reaching a stage of dissociating because one’s other defenses, such as fight-or-flight, have failed, their threshold for dissociating drops much lower than it was before the traumatic event. The nervous system remains vigilant, as if the magnitude of a threat once encountered becomes the brain’s new frame of reference for interpreting the world.

For traumatized people, healing means recovering their ability to feel that the world is a safe-enough place; not to think it but to feel it implicitly.

In Porges’s theory, all mammals share three biological systems for creating safety, and these can be ranked in sophistication and evolutionary order. The oldest, most primitive system, which we share with reptiles, is dissociative shutdown, including fainting. The next oldest system is the fight-or-flight reaction, in which the sympathetic autonomic nervous system revs us up for physical action. Once a fight-or-flight reaction has been mobilized its goal is to neutralize the threat either by running away, or by attacking and destroying its ability to do harm.

The newest and most sophisticated way to create safety is what Porges calls the “social engagement system.” It’s what most of us use most of the time in our daily lives. The social-engagement system is mediated by a branch of the vagus nerve that connects brain, face and heart. Porges points out that when animals play-fight they maintain face-to-face contact, allowing them to feel safe because they are empathetically in touch with each other’s feelings. The reason we usually feel reasonably safe with each other, according to Porges, is that we can see, and even to some extent empathetically feel, each other’s states. Fight-or-flight tells us, “If you don’t know what it is, it could kill you!” Social engagement says, “Calm down, look at that person; can’t you see that he doesn’t want trouble any more than you do?”

My friend’s story about the Glasgow police officers beautifully illustrates the social engagement system at work: The officers used their own limbic, emotional brains to defuse a possible threat. The man was belligerent, irrational, in the grip of some degree of fight-or-fight arousal, but the police established contact so that their calm limbic systems could entrain his hyper-aroused one until it settled down to match theirs. Note that they didn’t use words to command him to do anything. They just engaged him with a lot of implicit, largely nonverbal gestures, looks and tones of voice conveying a feeling that he was safe with them, and that he mattered.

Using Porges’ theory to explain what the Scottish officers did, they literally used their hearts to reach the inebriated enraged man’s heart — that is, to bring on-line the ventral branch of the vagus nerve that gives the brain rich sensory data about emotion. When we’re in a state of fight or flight we can’t use our hearts to tell us what another person is feeling, or what we ourselves are feeling, and so we can’t communicate or problem-solve collaboratively. It’s only in the social engagement system that we can be safe together.

To their credit, many American police officers manage similar acts of competent decency; the problem for the American public is that, as my friend suggested to the Glasgow officer, we can’t realistically count on it. That's because we have no way of knowing how to predict police behavior when their culture is so heavily militarized. For Americans of color, especially, the sight of police lights flashing in the rear-view mirror evokes terror and their own trauma.

In King County, crisis intervention training — designed to help officers de-escalate potential conflicts with mentally ill people — has recently been increased from eight hours to 40. Former King County Sheriff Sue Rahr, now head of the Washington State Criminal Justice Training Commission, is working to prepare officers better to resolve potential conflicts by talking with the public. The training sounds good because it’s experiential, exposing officers to the kind of stressors they encounter in their work, and giving them training to stay calm instead of escalating into fight-or-flight states.

But as Rahr told Crosscut’s David Kroman, officers show signs of burnout within as few as five years on the job. This suggests they need support beyond training at the academy. By comparison, psychotherapists like me typically need at least an hour or two of peer support and consultation weekly to avoid burnout from frequently working, as police do, with people in crisis.

Changing a militarized police culture is as complex a task as healing from trauma; I imagine it’s often precisely the same thing. As a therapist I work with traumatized people, who have taught me that it is hard to recover one’s faith in the social engagement system, once broken. Relying on each other’s goodwill feels vulnerable, though it often provides real safety, while escalating into a fight-or-flight state tends to ensure that at least one party will be harmed.

Some American police seem to adopt a militaristic, “warrior” stance emphasizing a fight-or-flight stance. But, in a more hopeful development, others are turning to Buddhism and mindfulness to develop their skills for withstanding strong feelings without losing their ability to think and communicate.

A 2015 update to the Seattle Police Department’s policy manual covers the topic of “de-escalation” in a page full of directives, a good example of which is:

When safe and feasible under the totality of circumstances, officers shall attempt to slow down or stabilize the situation so that more time, options and resources are available for incident resolution.

Though this sounds like an excellent intention, it’s also a far cry from the Scottish officers’ familial attitude: “This man is somebody’s grandfather.” And I wonder what it will take to put to rest the traumas that keep police locked in vigilance against a suspicious, grieving public. Here in Seattle, the February police shooting of Che Taylor remains an unhealed wound.

It seems like a good sign that, as the New York Times reported last year, American police are asking their Scottish counterparts for help in learning how to police safely without guns, relying heavily on the social-engagement system.

One thing at least is clear: No one learns good social-engagement skills in a vacuum, or by reading a directive. To enjoy the kind of safety the social-engagement system offers — with its sophisticated capacities for problem-solving, negotiation and emotionally intelligent understanding — police and community will need time, and plenty of each other’s help.