A city slicker finds the ultimate place to unplug 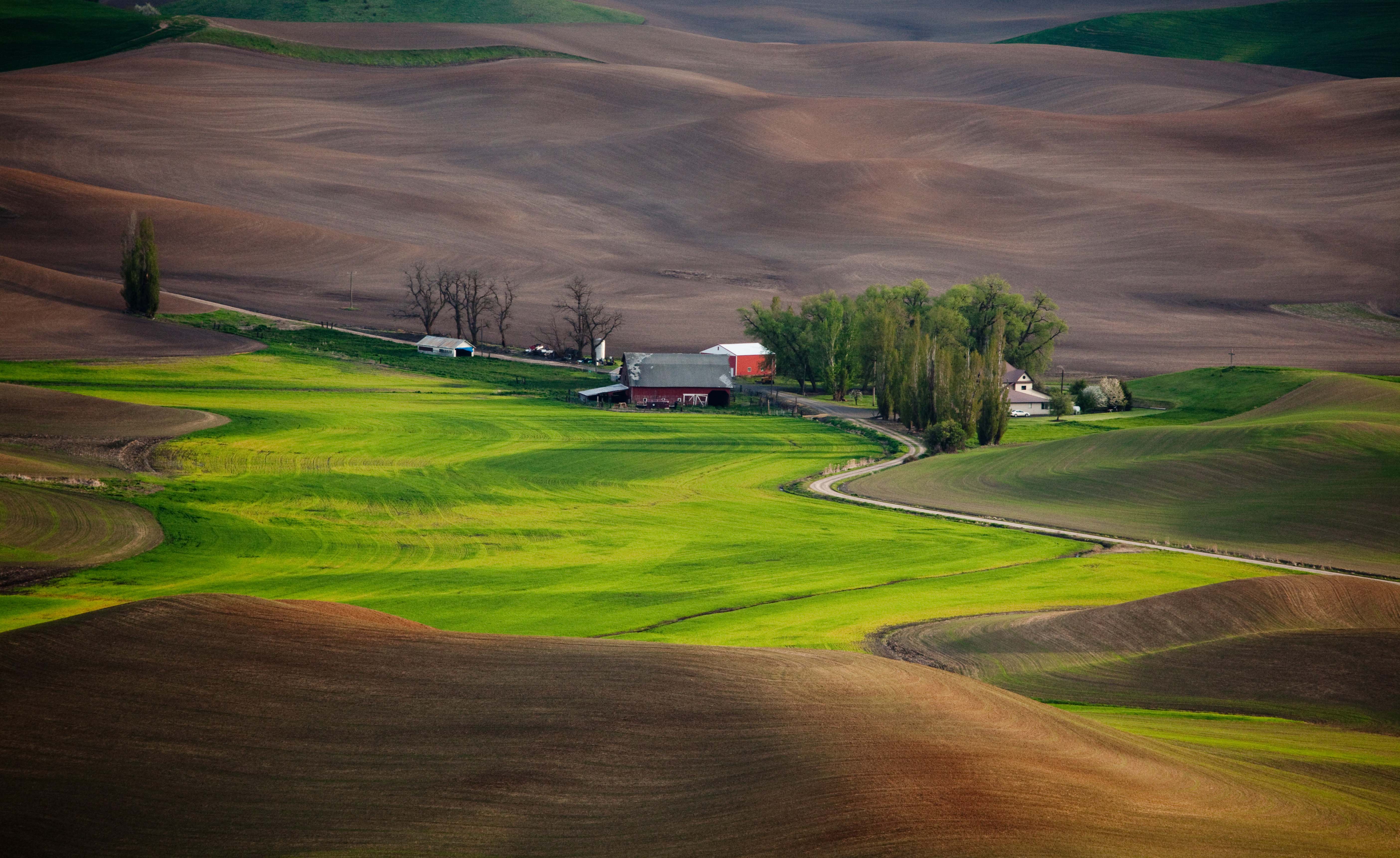 A scene from Palouse, WA.

I grew up on Puget Sound, where islands meant a chance of solitude and escape. I’ve long assumed such experiences required water, but I recently learned that isn’t true. On a trip to the dry side of the mountains, I found a retreat that gave me all the benefits and amenities of an island sojourn — out in the middle of wheat country.

To get there, I had to cross the great dry ocean of Eastern Washington. After crossing the Columbia River at Vantage, you rise quickly to the long flats that stretch across the state and find yourself suddenly in the middle of the Columbia Basin project, where dams and irrigation have transformed dry steppe into fertile farmland.

In summer, the color palette is blue sky above, golds and browns on the fields below, with occasional dashes of green from crops or groves. In this country, the sky always seems an expanse of blue with white clouds on the horizon, making the landscape seem like a comforter losing its stuffing out the edges. Periodically a sign or building will pop up with “Go Cougars” on it, a reference to Washington State University in Pullman. The name seems apt for wheat country in late July: The fields of grain are like a cougar pelt spread over the land.

My destination was a crossroads community with the non-tourism-savvy name of Dusty, about 250 miles from Seattle. A friend had recommended an unusual little B&B just outside of “town,” about 17 miles southwest of Colfax. People pass through going east and west, or head south on Highway 127 toward Dayton, Starbuck or Waitsburg. “If you’re ever in Dusty…” my friend had said, which seemed unlikely. But an assignment nearby offered an opportunity.

A short drive south of Dusty brought me to a sign indicating “The Parsonage.” The Parsonage is an actual parsonage, owned by a local non-denominational Christian church. The last couple of pastors have lived in their own homes, so for the last 16 years it has been made available as a B&B. Like most farmhouses here, the Parsonage is set off the road in a small oasis of trees. It’s an attractive, Craftsman style cottage with a big front porch featuring a two-person swing, a table and chairs, and an American flag — all the country living necessities. The home is shaded and cool, but the wheat fields start at the lawn’s edge. Step off the grass and it’s a hot, dry, Palouse summer.

A Post-it note on the front door welcomed me in. I was the only guest and the hosts do not live on-site. The first thing that struck me on entering: the smell of oak and old furniture. The second: The house is deceptive, bigger on the inside than it appears on the outside, like Dr. Who’s spaceship. It was built by a prosperous local for his family in the pre-Depression 1920s.

Downstairs are various bedrooms, a bathroom, linen closets, a modern kitchen, living room, dining area, a room set up as an antique shop where guests can buy vintage stuff on the honor system. There’s a pantry with a resident cat. Upstairs is a kind of attic dormitory like you find in rambling old summerhouses. It has beds, stuffed animals, and secret nooks where more cozy beds are stashed. The downstairs refrigerator is stocked with beverages. Fresh cookies are on the counter. It’s a do-it-yourself B&B: Come in, make yourself at home. Farmers, like islanders, are self-sufficient, and expect you to be too.

I called Vicki Broeckel, the proprietress. She and her husband, Dale, have a wheat ranch down the road a few miles, but no longer farm it — they sold some off and lease the rest to a neighbor. It’s hard work, the wheat business, and these days you have to go big or go home. They had 600 acres, which Vicki says is too small for a wheat farm nowadays. To make it worthwhile, you need more land. So local family farmers buy or lease land from neighbors who are retiring or getting out of farming.

Vicki and Dale met when they were little kids — they rode the school bus together for years — but their relationship changed after Vicki asked Dale to a Sadie Hawkins dance. They’ve been married 53 years now. She’s spent her life within a few miles of this place. There’s a kind of stability here. Farms are widely spaced, a spread out agricultural archipelago. People, Vicki says, know each other through the local Country Bible Church — that’s where you see and talk to your neighbors. Vicki jokes that they almost renamed it the Dusty Bible Church in the ‘70s, but that sounded bad. In any case, there’s nothing dusty about the well-kept house, which feels like a solid rural anchor in so many ways.

She asked me what I’d like for breakfast, and explained that she would bring over a full meal in the morning at an appointed time before she started her day. She asked if I had any dietary restrictions, and of course I offered typical big city challenges: no sugar or honey, no eggs, gluten-free. It seems almost impertinent to be gluten-free in the middle of one of the largest wheat producing counties in the nation, but she was un-fazed. Her idea of a full breakfast could feed farmhands headed out for a hard day at harvest. One morning she fed me coffee, non-cardboard gluten-free toast, a mound of bacon, planks of hash browns, a stir-fry of shrimp with fresh asparagus, and a bowl of fresh sliced peaches, blueberries, blackberries and raspberries with cream. I hope no one ever tells her about a Continental breakfast.

Vicki sat and we talked through breakfast. My Seattle friend who recommended the Parsonage did so largely on account of what a lovely person Vicki is, and it’s true. She told me about the history of the place, and the area. We talked about country life and travel and growing up in the Palouse. She brought me some bird books. Vicki was full of recommendations that made me want to stay and explore the area longer: a u-pick orchard off the beaten path down near the Snake River that yielded to-die-for fruit, her family’s homemade German sausage, a restaurant near Pomeroy where a homeschooling Christian family makes some of the best home-cooked meals in the region. She showed me where a great horned owl lives at the back of the Parsonage and one evening I interrupted its hunting mice near an old barn. Generally, I avoid B&B’s because I feel too watched sharing the intimate home space with the resident hosts. Here I felt the right balance: Good conversation, then solitude.

In my mind, the Parsonage is an incredibly quiet place, but in fact during daylight hours the trees around the house are filled with sparrows and finches flitting from tree to field and raising a cacophonous racket. Hundreds of them congregate in a single large evergreen in the front yard, an avian condo tower of bird Babel. In the background, trucks full of grain rumble down the highway at the end of the driveway, blasting by to get their product to market. But inside the house, the sounds are dampened and you feel cocooned as if in a Middle American time capsule.

I was struck by the stillness at night, too. I woke once at 2:30 am, my window open because of the heat. It was dark and there was no sound — no birds, no traffic, no buzzing insects. I could feel the deep quiet of the vast rolling fields around me. I walked out onto the front porch, down the steps, and looked up at the sky. A band of Milky Way stretched overhead. Then a shooting star streaked by. It was the heavens you only see in the country these days, or out at sea. It was a view duly noted by whatever human organ registers genuine awe and wonder.

For me, the Parsonage was a classic sanctuary — an island experience where none was expected.