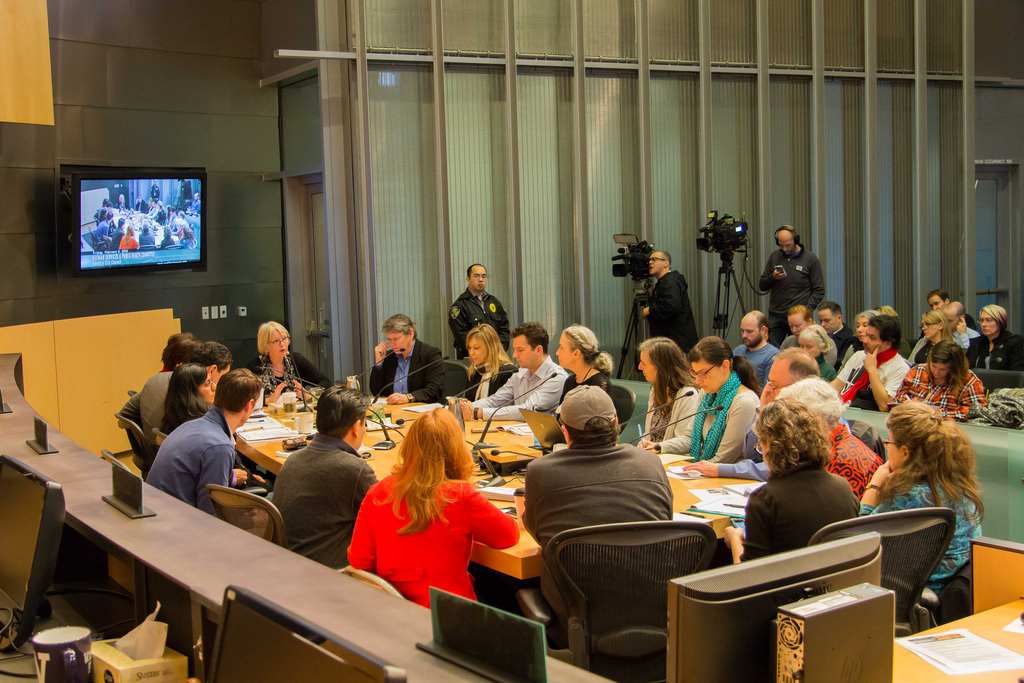 When Barbara Poppe, the city’s hired consultant on all things homelessness, was in town last June, she cosigned a long-lived stereotype of the Seattle Process.

Seattle, she said, “is much more inclined to discussion and planning and process that goes on and on and on.” There are so many moving parts in Seattle, she said, that getting things going is an enormous slog. Among the reporters in the room as she spoke these words, there was a small chuckle of understanding.

The irony, however, is that Poppe’s forthcoming report on Seattle’s response to homelessness seems to be encouraging hesitation in some corners of City Hall. Yes, there are tweaks and adjustments — Mayor Ed Murray recently hired the city’s first inter-departmental lead on homelessness — but any move toward the widespread overhaul of Seattle’s system, which many inside City Hall believe needs to happen, hangs in the balance of this report, now nine months in the making.

So on Wednesday, when a group of homeless advocates sent to City Council a proposed overhaul of how the city conducts cleanups (or sweeps) of unsanctioned homeless encampments, it was the first real sidestep of the Seattle Process. Poppe’s report has not been released. The signatories on the letter — which include Columbia Legal Services, the ACLU of Washington, Real Change, the Public Defender Association, the Seattle/King County Coalition on Homelessness and the Seattle Community Law Center — are uninterested in waiting on another task force. No more committee meetings, the letter essentially says. This is what we think needs to happen. "I feel very strongly…that we are at a point where we absolutely need to match our actions with our rhetoric," says Alison Eisinger of the Seattle/King County Coalition on Homelessness. "We are really, really wasting our time if we are bogged down in, 'Is this a political thing or is this a policy thing?' There’s just too much work to do."

In the absence of anything resembling the national Republican/Democrat divide, Seattle’s binary is consensus versus ideology. Where Murray has been the figurehead of the former, Councilmember Kshama Sawant could arguably be the most obvious symbol of the latter. If you like Murray, it’s probably because you think he can forge compromise; if you like Sawant, it’s probably because you see her as uncompromising.

Around the time Murray declared a Homelessness State of Emergency, there emerged a dialogue about a “middle way” — a path that balances the calls for empathy by homeless advocates with what Murray sees as a serious public safety hazard. In several press conferences and TV addresses, Murray seemed to admonish anyone who would not follow this middle path, the best the city could hope for. Murray’s public safety advisor Scott Lindsay published an opinion piece in Crosscut defending the approach.

All of this is exactly in line with Murray’s modus operandi on City Hall's seventh floor: get opposing views in a room, lock the door, and let them fight it out. And on the $15 minimum wage and his housing recommendations, the results have been impressive, if not without controversy.

So when it comes to overhauling how the city conducts sweeps, after months of complaints from advocates, why wouldn’t Murray propose the same tactic?

The broader activist community has, for the most part, played along with the Process, largely at the behest of Councilmember Sally Bagshaw. They have attended roundtable discussions at her committee meetings. They have met privately with her, occasionally alongside the so-called “neighborhood activists” — people concerned with needles and unsightly gatherings of homeless people. They’ve maintained email thread discussions, often around how to add more beds to the city and expand shelter hours.

The advocacy community felt like they were making some inroads in a first draft of a resolution on removing homeless from the area beneath I-5 and along the East Duwamish Greenbelt, known as the Jungle. It was an approach that treated the situation as a public health issue, and tied removing people to specific offers of shelter and letters of notice. It also only closed sections of the Jungle at a time.

Murray firmly rejected this resolution, as was played out in his late-night texts to Bagshaw. The final draft, to the dismay of those who helped write the first draft, was much more vague about how sweeps would be conducted.

Instead of more meetings, the group laid its specific "calls to action" on the table: clear out an encampment only when there is a specific threat to safety, not an unsafe environment inherent to being homeless. If that threat is not present, the city must provide 30 days notice and extensive outreach. And when the sweep occurred, the city needs to better document the storage of peoples’ personal items.

The proposals take on the city’s longstanding multi-departmental administrative rules on moving encampments, which elected officials like Murray and Bagshaw have been hesitant to revise because they fear a drawn out and distracting, yes, process.

Rather than disappearing into a backroom and emerging with proposals for the council to tweak, the letter could push the debate toward a more open, legislative debate. If the advocates find a majority of councilmembers to side with them, the mayor’s process will be rendered moot.

So now the question is, for all the scorn about the Seattle Process, is City Hall actually ready to make good on the calls to kill it off and speed things up?