Bicycling style check: Are you a Fred? 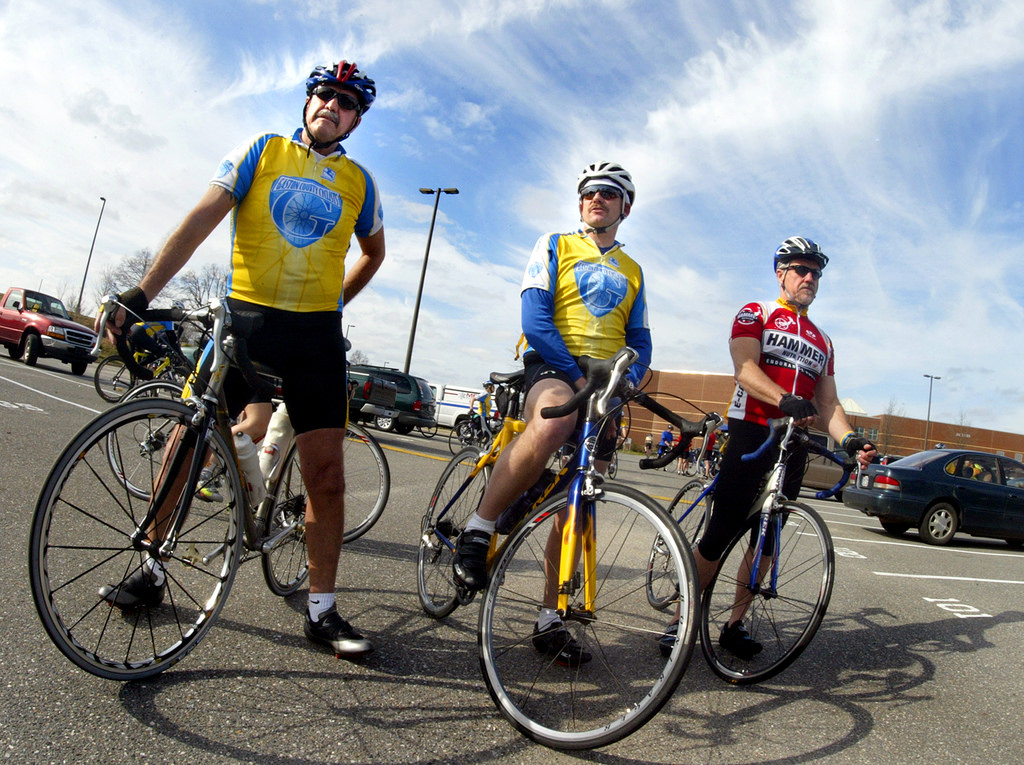 Every summer they return to the Burke-Gilman Trail, like the swallows to Capistrano, only their plumage is much brighter — unnatural day-glo colors intended for maximum visibility, covered with logos for obscure European brands (Festina! Movistar! Tinkoff! Sky!), woven from tight-fitting and generally costly fabrics (Lycra! Spandex! Merino wool!).

Their butts bulge with foam pads. They wear funny fingerless gloves. Their wrist watches bristle with power data and GPS numbers connected to phone and cloud. Between their legs are overpriced machines that are even less environmentally defensible: carbon-fiber contraptions made in exploitative Taiwanese and Chinese factories that range from the merely cheap (under $1,000) to the obscene (over $10,000).

Meet the Fred: the middle-aged man I dread becoming, the man I may already be.

“Fred” is a term of bemused disparagement popularized by cycling author/satirist Eben Weiss, better known by his blog moniker Bike Snob NYC. It’s shorthand for the strident, humorless guy — and they’re almost entirely guys — who takes road biking Way Too Seriously, yet somehow gets it wrong; who longs to be accepted into the peloton, yet isn’t cool enough or fast enough. Fatally, he lacks panache. He tries too hard, and it shows.

In England, such tribalists are called MAMILs (middle-aged man in Lycra). In Seattle, Freds appear every summer weekend, stirred by watching the Tour de France in HD, fading memories of Lance, training for the annual Seattle to Portland ride, or the simple desire to drop 15 pounds — too late! — during swimsuit season.

Like Weiss, I mock those guys, yet I ride among them — and not entirely by choice. Twelve years ago I broke many bones, so low-impact sports like skiing and cycling are all I have left. I’d always been a slow, casual urban cycle commuter, here and in New York. But after the wheelchair and partial recovery, I bought my first road bike and became addicted. (My second, shamefully, is worth about three grand. My two rusty commuters are worth about 30 bucks combined.)

Now I’m in danger of becoming a Fred. Or maybe I already am. Either way, I feel faintly ridiculous while riding — like doing yoga in the street, the city your gym — and uncertain of my status.

That’s why I sought out Frank Strack, hardcore local cyclist, author, and founder of the Velominati website. I needed his advice.

A Minneapolis transplant now based on Capitol Hill, racing days mostly passed, Strack started the Velominati site in 2009, using the skills from his day job in IT. He was also co-editor and contributor to the 2014 volume The Rules: The Way of the Cycling Disciple, which amusingly codified the religion of the two-wheeled.

The Rules is both a bible and a send-up, and I found it tremendously helpful when I first encountered it. For instance, Rule 14: Shorts should be black, which I took to heart. And 19: Introduce yourself. (This when you ride into a group of other people, or they catch you.) And 30: No frame-mounted pumps. And 40: Tires are to be mounted with the label over the valve stem. (Aesthetics count for a lot with the Velominati and roadies in general.)

Others I found impossible to follow, e.g. Rule 90: Never get out of the big ring. (It’s the gear in front that’s harder to pedal.) Or 37: The arms of the eyewear shall always be placed over the helmet straps. Or 91: No food on training rides under four hours. Or 24: Speeds and distances shall be referred to and measured in kilometers.

So naturally I was fearful upon meeting Strack for a short ride around Queen Anne. He cuts a dashing figure, with a custom paint job on his high-end bike that matches his “kit” (jersey, shorts, etc.) in orange, white, and black. Some of the rules are enumerated on his bike, others on the jersey (for sale on the Velominati site, natch). I expect to be judged, and judged harshly.

To my surprise, however, Strack delivers his edicts lightly. Cranking up Dexter, he assesses me cooly. Am I a Fred? “You’re comfortable on your bike. You’ve got a classic look,” (meaning black shorts and plain white jersey, color-coded to my bike). However, “Your saddle bag does make your bike look a little lame” — that being a violation of Rules 29 and 31. But in general I pass inspection, having logged many miles and gained many efficiencies during a recent six-month sabbatical from work.

Strack explains how the Velominati distinguish between the merely serious (as all Freds are) and the correct. Thus Rule 80: Always be casually deliberate. “It means that you look good,” says Strack, “but it doesn’t mean that you look like you’re trying” — i.e., showing the strain, making a big deal out of mileage and other feats.

Velominati etiquette is closely related to style. “I think the manners are steeped in European tradition,” says Strack, who grew up in a Dutch-American cycling family. That means no ostentatious boasting or bragging (very Fredly behaviors), and Rule 95: Never lift your bike over your head. And be gracious when caught by or catching an unfamiliar group — a particular anxiety of mine, I tell Strack. There’s no sin greater than being a “wheel sucker,” someone who hides from the wind behind another rider or group, yet refuses to “work” (rotate to the front and give others a break). For a tired solo cyclist in such a situation, Strack cites Rule 19, “Ask if it’s all right to sit in for a little while.”

Says Strack, “The best way you can get better is to ride with people who are better, and not feel self-conscious about it. Try a bunch of different groups until you find a group that’s compatible. Some groups are super snobby, and some are super friendly. Don’t be afraid to ask the dumb questions. Don’t be afraid to laugh at yourself.”

He recommends sampling group rides associated with local shops like Cascade Bicycle Studio in Fremont, Hedrick Cycles in Greenwood, and Branford Bike on Capitol Hill. “They expose people to the culture of cycling in the way the internet never could.” Though, Strack admits, his own website also disseminates knowledge and allows readers to communicate privately among one another to arrange rides.

But as with internet dating, being a Fred has benefits — more often social than romantic.

“There is no better way to make friends than to go out and suffer together,” says Strack.

Sure, the matching team jerseys can seem silly, but it’s better than Robert Putnam’s Bowling Alone. Aging cyclists can pedal away their woes (and calories) by measuring every watt and mile on Strava. That’s an app/website that allows riders to compare routes, times, and wattage from power meters that some have mounted on their bikes.

Better still is the pre- and post-ride ritual of coffee or beers with the tribe. Here it’s possible to indulge in or disregard the arcane talk of titanium versus steel frames, Coppi versus Anquetil at the Tour, the merits of modern pros like Froome, Wiggo, and Quintana, or EPO use among amateurs at grand fondos.

That doesn’t mean that dueling Strava data dumps, incipient manorexia, couture-costly Rapha kits, and bespoke bicycle fittings — down to the millimeter! — aren’t ridiculous. They are. But there’s also a worthwhile discipline to the skinny-macho display of male ego. A Fred — or the more enlightened, self-mocking ex-Fred — is doing something to manage his inevitable decline: watt by watt, K by K, calorie by calorie. It’s absurd, it hurts, but it gets you outdoors and out of your head.

And that’s the path, away from being a mere weekend rider, that Strack is evangelizing.

As we sit along the path through Olympic Sculpture Park, nursing our post-ride coffees, Saturday-morning cyclists whizz past. “Man that’s a nice bike,” Strack murmurs. Looking up from my notes, I see another guy on an entirely dorky machine, with handlebars higher than the seat, a big Velominati no-no. Yet Strack signals his approval: However slow or unfashionable, the guy is out for a ride.

“I think we get a bad rap for being snobby,” Strack laughs, enjoying the reputation. “We talk a tough game, but it’s really about promoting the passion for the sport. I couldn’t care less how many rules people break.

“Anyone who hopes to graduate from Fred status overnight has the wrong idea,” he adds. “You shouldn’t expect to do it right away. I don’t think there is a quick fix. Find a mentor. Get yourself immersed in the right group. It’s a lifetime sport. It’s a lifelong education.”

Recently, riding around Lake Washington, a standard Saturday-morning loop, I came to my usual pit stop in Kenmore. There, at the restrooms, Freds chat about gear and mileage. Two guys were comparing rides.

“How far you going?” one guy asked.

“Eighty or 100 miles,” said the other. (Those are not big numbers among Freds, and he wasn’t bragging.) He continued, “I’m training for this year’s STP. Not bad for a 76-year-old.”

No, not bad at all, not for a 76-year-old, not for a rouleur of any age or level of seriousness. He may or may not have been a Fred, but he’s the kind of cyclist I want to be. Though not just yet.