Can ghosts save Colfax? 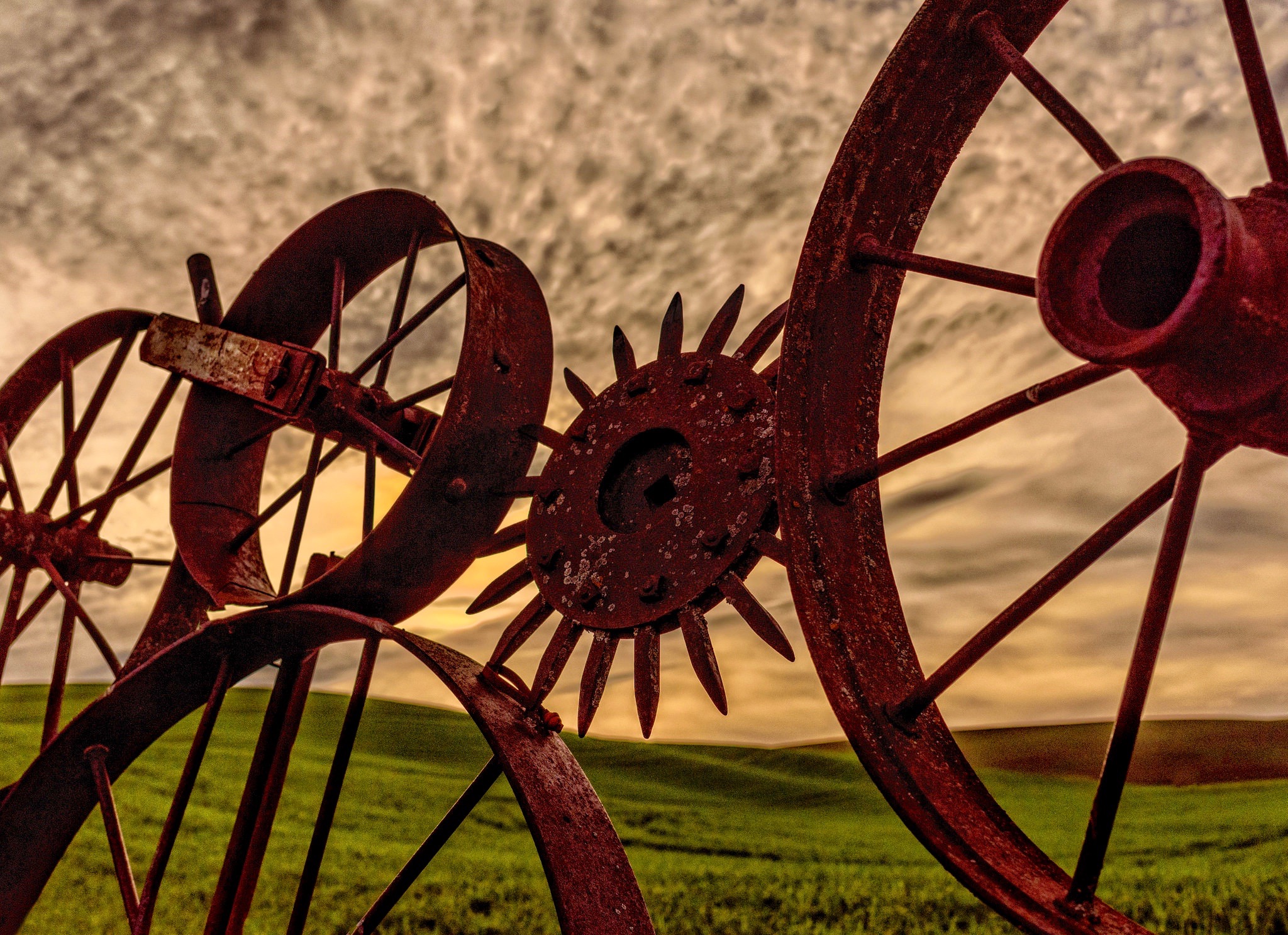 Plenty of creativity in the Palouse: a fence.

Editor's note: Crosscut columnist Knute Berger has been examining the challenges facing Washington's rural communities, even in the middle of a boom for urban areas. This is the first in an occasional series.

The rural idyll can be found on a road between the towns of Palouse and Colfax in Eastern Washington. The winding 17-mile stretch of Highway 272 is one of the most beautiful ribbons of country road in the state: rolling hills, old barns and farms, groves of tall pines. In springtime, the new wheat and lentil crops turn the hills into a sea of Irish green. Steptoe Butte is the high point in the region and the view from the top is spectacular, a counterpane that makes photographers salivate: undulating landscape stretches forever inviting an endless play of light and clouds.

If there is a farm country fantasy, this view distills it. Back in the ’80s, National Geographic ran a story on this unique geologic region we call the Palouse and called it an “American Paradise.” Others, including The Guardian, have called it “America’s Tuscany.”

Rural areas nationwide are struggling with unemployment, brain drain, loss of family farms. But the Palouse country is resilient. Whitman County is the largest producer of dry land wheat in the country.

If this were Tuscany, the central hill town would be Colfax. It’s not on a hill, however, but set in a valley where two branches of the Palouse River meet. It was founded as a good spot for mills (lumber and grain) and became the agricultural center and county seat. It’s not a romantic village but, of necessity, a workaday town. But it’s not unimaginative. Part of its history includes ghosts, and that touch of the supernatural could be a vital part of its future.

Colfax is not the largest city in the county — that would be Pullman, home of Washington State University, with which Colfax has a kind of longstanding rivalry. When I mentioned to one WSU professor that Colfax is looking to attract tourists, I received a snort in response. People drive through Colfax, they don’t stop there, is the common impression, and it is on a main road for people going to and from Pullman. It maintains a working class identity to that of the larger university town — farm and gown.

There are political differences too. Pullman is bluer than Colfax, which is red like most of the county. When Colfax was founded by James Perkins in 1870s he named it Belleville after a lady friend. But when their relationship faded, he re-dubbed it Colfax after Ulysses S. Grant’s first vice president Schuyler Colfax. It’s been Republican ever since.

It has also been remarkably stable. Many agricultural towns have lost population over the years. You can see shrunken villages and empty storefronts all over rural Eastern Washington. Colfax has neither shrunk nor grown. Its population of around 2,800 hasn’t changed much since 1910. That stability is also reflected in its downtown architecture: the stretch of its Main Street contains a number of functional 19th-century buildings with charm and embodied heritage, including a massive Masonic Lodge from1889. The good news is: there’s real potential for the kinds of renewal and renovations that can revitalize rural communities and add amenities that attract visitors.

To that end, in the last year Colfax joined the state’s Main Street Program, which offers a specific model for boosting rural downtowns with an approach that helps communities coordinate and concentrate their efforts. The Main Street approach also opens the opportunities for raising funds and getting state tax credits that help redevelopment.  It seeks to boost local businesses too.

The Main Street Program has helped revive historic downtowns that have become tourist meccas like Port Townsend and Walla Walla. On the smaller scale, where Colfax is, it has helped towns like Coupeville and Dayton. Colfax, sitting in the middle of America’s Tuscany, sees a chance to extend itself beyond being a destination for those seeking a tractor dealer or the county courthouse.

Valoree Gregory is the point woman in Colfax for the Main Street. She represents the historic district, the Chamber of Commerce, the Arts Council, and the Downtown Association—a one-woman band who reflects the coordinated approach Main Street encourages. She operates out of the restored Victorian Perkins House, built by the town’s founder in the prosperous 1880s. She is pushing activities on many fronts. Colfax now hosts a First Thursday downtown festival, a summer farmer’s market, and offers tours of the historic buildings along Main Street (yes, the street actually has the same name of the Main Street program). Some of these buildings are time capsules of former times. The Waite & Ellis block from the 1890s features small apartments upstairs that once housed mill and railroad workers. It still looks as if the inhabitants had just moved out.

A Chamber ad in a promotional publication says, “Ghost Towns Happen When You Don’t Shop Local,” and stimulating local businesses is a major Main Street theme. But ghosts aren’t all bad for Colfax. Indeed, they’re proving to be a boon. The most successful events Gregory has initiated are “ghosts hunts” at an abandoned hospital that looms on a hill over Colfax. It’s the former St. Ignatius Hospital, a large brick pile first erected in 1892 and expanded early in the 20th century. It served as a nursing school and the main regional hospital until the 1960s, then ended its serviceable life as a care facility for developmentally disabled adults in 2003.

It has been vacant since. The grounds are unkempt, many windows are boarded up. It is heavily damaged by water and vandals, and conveys the impression of a place designed not by the Sisters of Charity who found it but by Stephen King. The Washington Trust for Historic Preservation placed it on its most-endangered list in 2015. That fall, Gregory, who was actually born in the hospital, started Halloween tours and they sold out briskly. People will pay to have the beejeesus scared out of them.

On a private tour there recently the place was spooky even in broad daylight. Gregory says there are rooms psychics won’t enter because of the negative energy — there is a morgue in the basement and a patient’s room lined with soundproofing gives you the willies. Ghosts are said to include a railroad worker crushed between train cars who was the hospital’s first fatality in 1893. Another ghost whose sightings go back to the 1930s is one “Sister Johanna,” a nun who appeared at the bedside of dying patients to offer comfort.

If nothing else, St. Ignatius is earning a reputation as Eastern Washington’s premier haunted house. A Discovery Channel show, “Paranormal Lockdown,” filmed there this summer. Gregory is embracing the success of St Ignatius. “An abandoned hospital is a gold mine,” she says.

Main Street cannot thrive on abandoned piles alone. The buildings downtown need restoration and reuse. Local shops, cafes and businesses occupy ground floors, but as with many old Main Streets, the second stories need work and purpose. But there is encouragement coming from outside the community.

Earlier this year, a former Seattleite now living in Texas, Kim Nguyen, sold a modest, 1950s building she and her husband owned in Seattle’s Columbia City’s Historic District and was looking to reinvest. That Columbia City building was by no means a landmark, but its value increased due to the success of the revitalization of the surrounding neighborhood.

Nguyen saw an online ad for one of Colfax’s signature historic buildings, the Rose Theater, built in 1912. The original chandeliers still hang, the main floor still slopes toward the old stage. It is ripe for renovation and Nguyen says she wants to restore it. According to a front-page story in the Whitman County Gazette earlier this year, Nguyen fell in love with the theater, and then Colfax.

She has purchased five main historic properties downtown for less than $400,000 combined. That’s less than the $658,000 she got for one very modest building in Seattle, according to property records. Presumably she has some capital to work with. Nguyen wants to liven up Colfax, she says. “This small town, they have a lot of things that have brought it to now. We need something to get it awake,” she told Gazette. Mike Rizzitiello, the city administrator, said “She’s one of the game-changers” for Colfax. Specifics of planned renovations have yet to be revealed.

A challenge for Colfax is its Main Street itself — it is a main highway and WSDOT says that 10,000 vehicles a day pass through town, what with folks going to and from Pullman, and large trucks loaded with grain headed down to the Snake River where wheat and other commodities are barged for shipment around the world. Quiet along Main Street is a problem during the day. Narrowing the street doesn’t fit with its function as a major highway. Gregory says her goal is to “get people to stop.” Down Highway 272 in the town of Palouse, they’ve transformed a smaller farm town into a bedroom community for college professors and a weekend place for galleries, music, and shopping — a kind of Thursday-Sunday town. It’s charming and quiet with no major thruway. Colfax, in contrast, has to balance blue-collar work, transport and the addition of amenities.

In terms of branding, street banners proclaim Colfax to be the “Heart of the Palouse,” and Gregory says it certainly is a base camp for seasonal photographers who flock to places like nearby Steptoe Butte in the spring to capture the green hills of the American Tuscany. There’s another mini surge in the fall when the foliage turns colors. The fact is, in even when the crops are golden or brown in summer, the views are spectacular.

Other big days are when Colfax puts up folks come to the Palouse for football games, reunions and other WSU events. One bizarre attraction on Main Street: The Codger Pole, a giant, totem-like chainsaw sculpture commemorating participants in an 1988 epic football rematch of a game between Colfax and St. John in 1938. If you like weird, you have to see it.

Colfax is committed to turn itself from a kind of gateway to a magnet for locals as well as tourists, to shape a downtown that brings the community together and convinces road-trippers to stop and explore a well-preserved mid-19th century American-style “Tuscan” town. If it takes ghosts to do that, so be it.