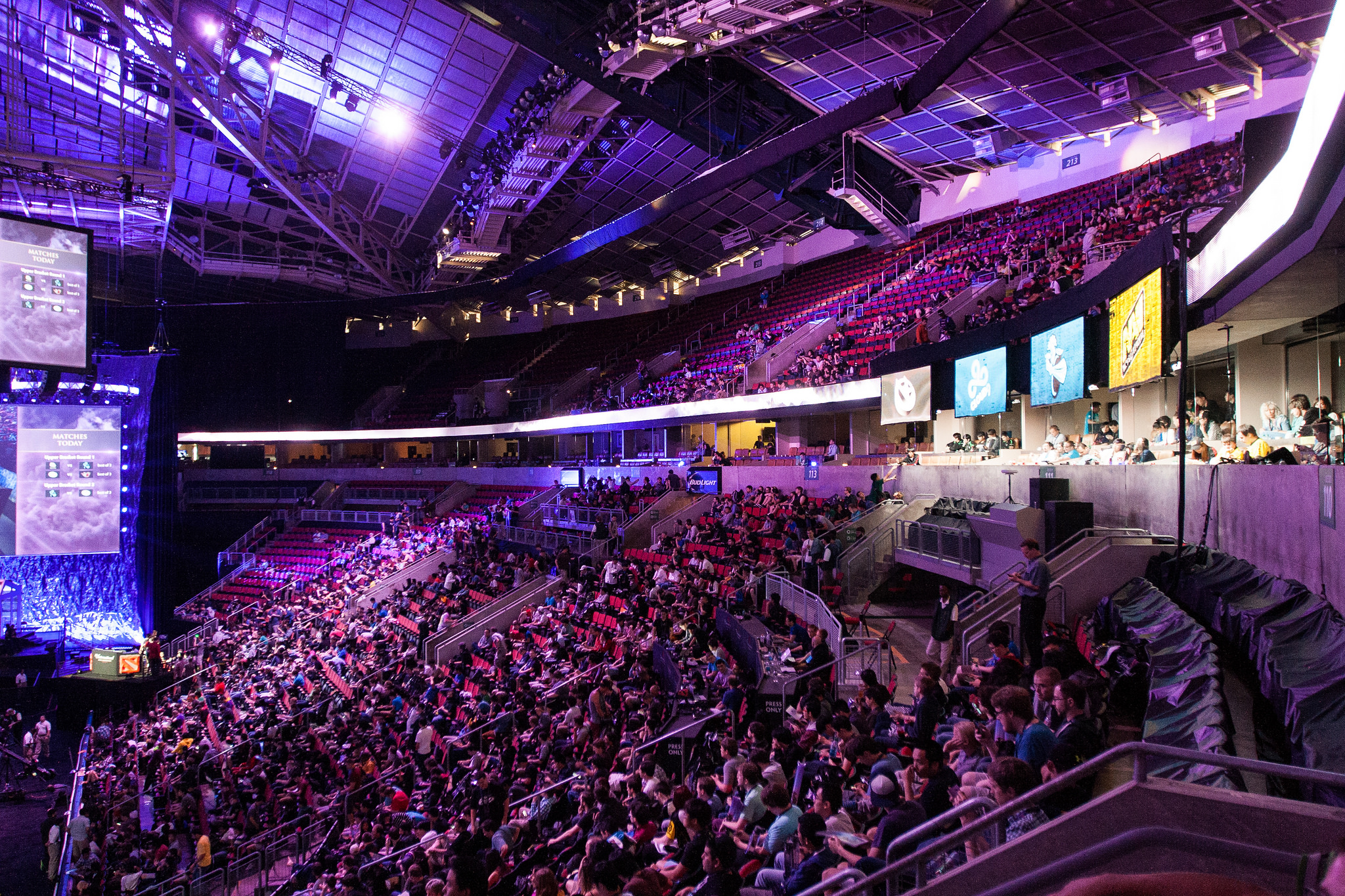 It’s draft day inside KeyArena. The young male competitors peck at PC keyboards in soundproof glass booths, selecting their screen avatars for virtual combat. With each click of the mouse, down drop colorful, dragon-tailed ogres, feathery winged creatures, wizardy characters in flowing robes, and a scorpion-like figure with giant pincers. They have names like Invoker, Oracle, Razor, Witch Doctor, Phantom Lancer, Lifestealer, and Axe. Arranged in two teams of five, their human operators compete for $20.7 million in prize money, with a $9.1 million first place purse.

These are the final hours of the nearly week-long 2016 International Dota 2 Championships, produced by Bellevue’s Valve Software. Now in its sixth year, it's the world's most lucrative gaming tournament, which are equally “eSport” contests and fanboy social gatherings. The day's events reportedly attract around 10,000 ticketholders from around the world, and are being broadcast in over 400 movie theaters in the U.S. But unlike professional sports, the spectators are nearly all players.

No Seahawks fan can scramble like Russell Wilson or cover a route like Richard Sherman. But practically everyone I talk to at the tournament knows intimately the rules, heroes, and strategies of Dota 2, which remain near-incomprehensible to an outsider. All of that cash is supplied by gamers like those around me on the lawns of Seattle Center, where a theater-sized screen is broadcasting the action inside KeyArena.

“The fans put up the money,” says one onlooker in the beer garden. “This is the first crowd-sourced championships.”

By the time of my arrival, tickets to the indoor proceedings — with four massive video screens following the action of the players in the center of the arena — are sold out. But that didn’t stop a crowd of fans from watching the action on screens positioned on a Seattle Center lawn. Wearing official T-shirts and brandishing swag bags, every year Dota 2 fans come from all over the U.S., Great Britain, China, Germany, Spain, South Korea, and beyond. But beyond the 10,000 or so ticketholders, it’s impossible to track the number of fans wandering around Seattle Center amid the tourists and families. Online, millions watch the contest unfold live.

On the screens is a hyper-modern, drone’s-eye view of a digital Tolkien fantasy-scape. The ten rival heroes are attempting to destroy the other team’s castle, ducking and hiding amid topiary mazes and scenic ruins in startling high-resolution. Dota 2 is like baseball or cricket, in that there is no score counter or timing clock. But like any modern sports telecast, the screen bristles with data and metrics. It’s like your Tesla GPS display has been simultaneously invaded by the Normandy landings and the Hundred Years’ War, allowing you to track every individual heartbeat and footstep in real time. The ten main heroes reveal themselves for flurries of combat, their exertion registering in tickers at the bottom of the frame.

Outside KeyArena, some fans are equipped with blankets and lawn chairs. They eat picnic lunches from shopping bags, eyes darting from phones to the big screen. They ooh and aah and burst into applause at key moments in the colorful battles. During the quieter moments in the contest, the shrieks of children splashing in the nearby International Fountain can be heard.

The voices chime like two different kinds of birdsong, each group seeming oblivious to the other. The Dota 2 throngs are conspicuously well-behaved (no litter in sight, recycling bins crammed full), and I only spot one party sipping discreet beers and smoking cigarettes on the sly. Some on the periphery are, like me, merely Dota 2-curious.

This is a global phenomenon, the private ritual of video gaming suddenly made manifest in Seattle.

The amateur player-fans are overwhelmingly tech-savvy, male, and millennial — the perfect demographic trifecta for advertisers. Yet for all the talk about future ESPN broadcasting rights, the only corporate brands I see — beyond Valve and Dota 2 — are Intel and HTC. Even as the tournament has filled my Lower Queen Anne neighborhood with fervor, the Dota 2 phenomenon — and multiplayer online battle gaming (MOBA) in general — still seems oddly unrecognized and un-monetized by corporate America.

Watching the spectacle outside, the media cameras and microphones inevitably gravitate to the few roaming cosplayers, dressed in elaborate costumes. The majority of the crowd are a less flamboyant lot. Most of the dudes wear cargo shorts and T-shirts, and the women wouldn’t look out of place at Folklife. The vibe isn’t so trendy or overwhelmingly white as at the Gorge or Coachella, nor so class-selected as Burning Man or other remote, big-ticket gatherings. It’s also nice to be freed from the tyranny of coolness one faces at Bumbershoot, that feeling of: “Am I hip enough for the KEXP stage, or should I stick to the dad rock?”

Instead, there’s a strongly democratic milieu, though almost entirely white and Asian. Though not everyone I talk to works in tech, there’s a strong overlap with the corporate lunchrooms in Redmond and South Lake Union. The game Dota 2, one suspects, is a good way to blow off steam after a long, stressful day at work. One screen has perhaps made you feel powerless and disposable through the day, but at home, the other says you’re powerful and a master of strategy.

Valve’s sportscasting team is on the scene, emulating slick TV clichés and paradigms, right down to the screen graphics and perky sideline gal. Dota 2 heroes die the way the Death Star exploded, with colossal, Wagnerian grandeur. Each kill — quite bloodless — prompts the same excitement associated with a goal from the announcers and those watching inside and on the lawn. Inside the KeyArena, some fans are shown waving their hand-lettered signs for the cameras. One advertised its holder’s single status and phone number; another said “Make America Great Again.” The hoopla is both cheesy and derivative, but as one of my beer-garden tutors says, “It’s more authentic than pro wrestling, but more fun than pro wrestling.”

Dota 2 players, a company rep explains to me, download the game for free via Valve’s Steam platform — think of it like the iTunes store for games, also selling other companies’ wares — and play it on their PCs and Macs. To add various features and powers to your heroes requires money, however, and that’s where the revenue stream begins. Upgrades and ancillaries become irresistible, and to buy them is like one-click shopping on Amazon, only for magical superpowers instead of Crocs. The Valve rep cautions, however, that “it’s very important to avoid pay-to-win,” which would alienate amateur gamers.

From those earnings comes the over $20 million purse for the tournament, the undisclosed event budget (renting out the Key, elaborate stagecraft, pyrotechnics, live orchestra, etc.), and some presumed profit for the privately held Valve. Founded 20 years ago by two ex-Microsofters, Valve is on a roll. In 2012, the New York Times cited an analyst’s valuation of $2.5 billion. It’s now thought to have between 300 and 500 employees and the company recently announced a nine-floor lease deal in Kemper Freeman’s new Lincoln Square tower, to begin next year.

Yet outside gaming circles, the software behemoth only gets noticed when those gameboys flock to Seattle Center.

The finals wind to a close, won by a China team named Wings Gaming, who beat Digital Chaos, a mixed Euro-American consortium. Sitting on the lawn, watching colorful creatures blow each other to bits, I question the whole experience: Is this a sport, or a form of theater or cinema? It’s something new, certainly: the Roman circus in digital form, where nobody dies and demons are ritually exorcized. As someone who’s often written about screen-raised millennials and the alarming erosion of shared cultural experiences — be it theater, art house cinema, opera, dance, or the symphony), I found myself unexpectedly cheered by this strange new amalgam of live audience and digital entertainment. Maybe it ain’t Sophocles, but the ancients are with us still.