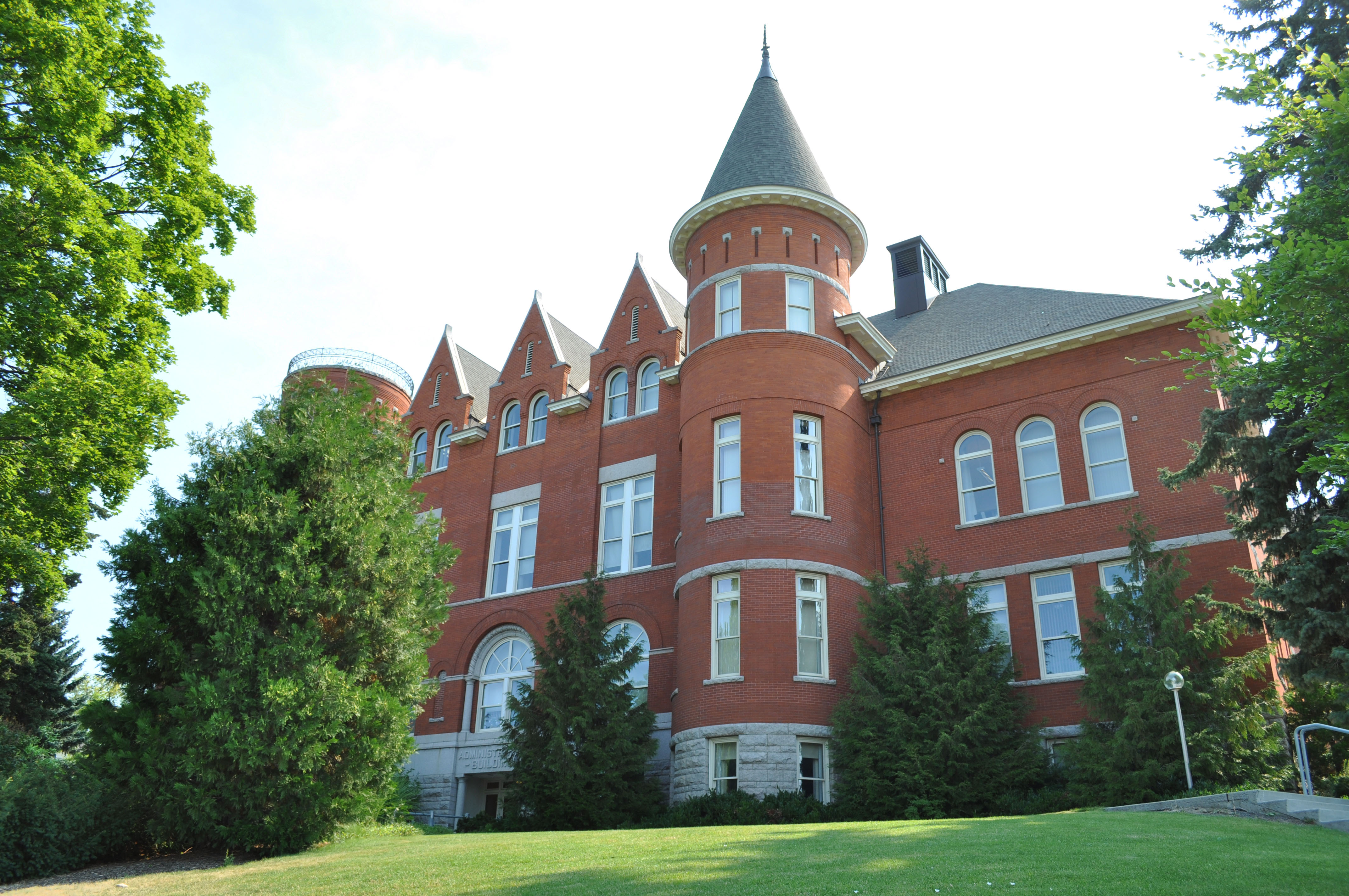 While the issues of sexual and domestic violence have come out of the shadows over recent decades, there is one place where it too often remains hidden: college campuses.

Only nine percent of colleges in the United States have reported any instance of rape, sexual assault, domestic violence, dating violence, or stalking since 2014, when federal law began requiring them to report annually on these crimes. Given that one-in-five women experience sexual assault during college, these figures suggest these institutions are engaging in cover-ups, neglecting victims, or fostering an environment where survivors do not feel safe enough to come forward.

This was the subject of a letter earlier this month from 31 sitting U.S. Senators, including Washington’s Patty Murray and Maria Cantwell. Of the 145 postsecondary institutions in Washington, only 54 have reported any instances of the above crimes in 2014. Only 21 institutions reported at least one rape, a rate of 14 percent. The letter urged the government to do more to keep schools accountable.

Washington's numbers on reporting assaults and rapes are better than many states.  However, the state ranks sixth in the nation for investigations currently open under Title IX Federal Law, which prohibits sex discrimination in education, including rape and sexual assault, at any school that receives federal funding. 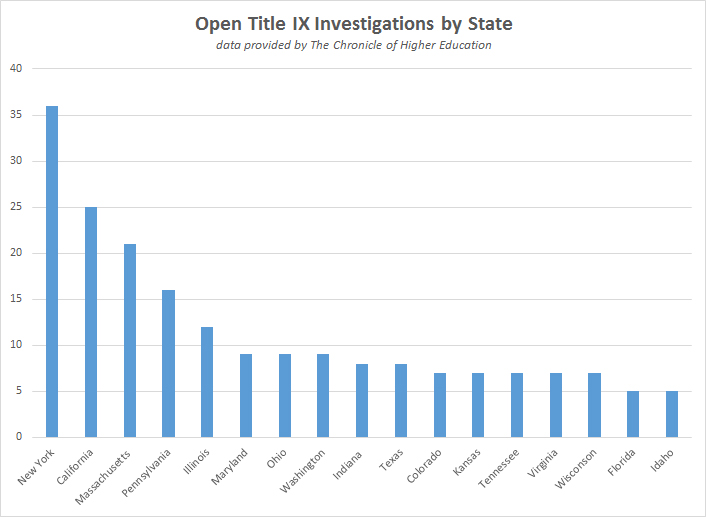 With many young adults gearing up to attend postsecondary school in the fall, there is growing concern about college campuses not doing enough to address this issue. Kansas State University, for example, is currently being sued for not handling complaints as required by federal law. They allegedly told two students they would not investigate their rapes, which occurred at off-campus fraternity houses. Kirk Schulz, president-elect of Washington State University, was the president of KSU at the time the complaints were made. Schulz is not specifically mentioned in the suit.

WSU has its own problems. In 2011, the university was chosen randomly to be investigated for compliance under the Clery Act, a law that requires federally funded postsecondary schools to disclose crime statistics. In the 2007 calendar year, the investigation found that WSU failed to properly include two forcible sex offenses in their annual report. Due to violations of statutory and regulatory requirements, they were subsequently fined $82,500. The fine was later reduced to $15,000.

WSU has three investigations currently open under Title IX. According to the Office of Postsecondary Education, WSU also reported ten rapes in 2014, the second highest number of rapes in a postsecondary school in Washington. Two of the three open federal investigations are in response to specific complaints — one by the federal government and one from a student.

But another way of looking at these investigations is that WSU isn’t handling assault disclosures properly.

“I think we do have a good process, but there is always room for improvement,” says Anderson.

Whitman reported five rapes in 2014. With an undergraduate population of 1,498, that comes out to a rate of 3.34 rapes per one thousand students, the highest rate of rape at any postsecondary school in Washington. Whitman’s Title IX investigation stems from a student complaint in 2014, which alleges the college mishandled a sexual assault complaint by not taking disciplinary action against the attacker.

Similar to WSU’s Anderson, Whitman College Title IX Coordinator and Associate Dean of Students Julie Dunn explains in an email that the high rate of reported rapes is not a reflection of the crime occurring more frequently at the college, but of more students being willing to disclose the assaults.

“We pride ourselves on creating a campus culture where [sexual assault policy violations] are not tolerated,” wrote Dunn.

Whitman College and others often explain these investigations and reports as a reflection of students knowing their rights or being willing to disclose. The high numbers deserve scrutiny, however. Title IX investigations are meant to gauge what schools are doing wrong. Ideally, an institution would strive to have no open investigations, or those that conclude the school committed no wrongdoing.

There have been 254 Title IX investigations since April 4, 2011, according to a project by the Chronicle of Higher Education. Of the 50 cases that have been resolved involving 42 schools, none have been fined, and there have been no instances of schools actually losing federal funding because of violations. Critics say these investigations are little more than a slap on the wrist for institutions.

University of Puget Sound in Tacoma, Washington is not being investigated for Title IX violations. Yet they have a high reporting rate of rape — nine were reported in 2014, with an enrolled population of 2,286 students. This is the third highest number of reported rapes at a school in Washington.

UPS’ Chief Diversity Officer and Title IX Coordinator Michael Benitez, Jr. notes that reports of rape have risen at UPS in the past few years. Similar to his colleagues at other colleges, he says this doesn’t mean it is occurring more often.

Implementing proactive programs is what is most important in prevention, he says, and may be why the university hasn’t been investigated under Title IX. He says UPS trains students as “sexual misconduct officers,” for example, and offers students to give feedback on policies.

“We really do care about the safety of folks psychologically as well as physically,” said Benitez.

To catch issues that the Clery Act reports and Title IX investigations do not, colleges often turn to campus climate surveys. These surveys are a focus for individuals fighting campus sexual assault, as well as university representatives and even the White House. The federal government requires campus climate surveys to be conducted in 2016 by universities. There has been no instruction on how often surveys should be conducted.

Of the postsecondary schools we interviewed, all say they already use these surveys to uncover hidden issues and figure out whether the school’s programs or policies need to be modified.

"The thing about Clery is it is based on jurisdiction.... so it's not the most complete picture of what our students are experiencing," said Tumas. "Really, for me the most compelling or most important numbers are on climate, campus climate surveys that we do with our students."

The most recent campus climate survey that was conducted for the entire UW-Seattle campus was in 2014, and had a sample of only 651 students, a very small percentage of the overall student body.

Overall, three universities with the highest number or rate of reported rapes in 2014 (WSU, UPS, and Whitman) do not have climate surveys that are available to the public, or surveys that include questions relating to sexual assault. 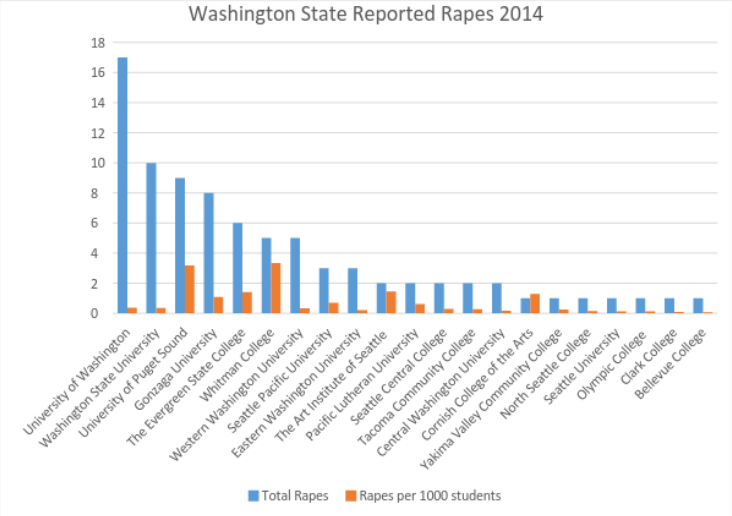 Whitman has no surveys that are publicly available to review, for example, though they’ve conducted them in 2007, 2010, and 2013. Rather, the Sexual Misconduct Victim’s Advocate and Associate Dean of Students Barbara Maxwell compares the results from previous years to figure out what areas need to be addressed, she said in an email.

UPS has a survey report that was conducted in 2011, but there were no specific questions in it about the campus climate regarding sexual assault. It instead focused on issues related to general discrimination or isolation. The response rate was 40 percent of students.

WSU had a climate assessment published in 2004 according to a news release, but the link to the report is broken or the document has since been removed. In a commissioned report on campus climate in 2013, the document listed three other climate assessments that were published by WSU — two in 2006 and one in 2011. None of these surveys are publicly available.

When asked for additional information, Anderson — the Title IX coordinator of WSU — said they’ve conducted a survey on their main campus every year since 2004 through the National College Health Assessment. The NCHA releases an overall report from all participants, but WSU does not release their individual results. When Anderson sent the data by email, there were specific questions in the survey relating to how often students experienced sexual assault.

It will not be until after the first round of mandatory campus climate surveys in 2016 that prospective students will have the publicly available information to understand an individual school’s climate on this issue. In the meantime, Clery Act and Title IX investigations are the only sources of data as to how institutions are handling sexual assault.

In their initial report, the White House Task Force to Protect Students from Sexual Assault concedes that conversations about consent and sexual violence prevention should begin before the college years. Their defense for putting so much pressure on postsecondary schools to prevent sexual assault is that the college years are formative, and reinforce ideas and values that will be held through adulthood.

Anderson agrees the mentality that leads some to not report or disclose sexual assault is much bigger than universities can address alone. More needs to be done as a society, she believes, including earlier education on consent.

“I think that it will require a cultural shift before we really see the numbers changing,” said Anderson.

Correction: This story previously stated that the most recent UW campus survey was in 2000 — the most recent publicly available survey was conducted in 2014, and the college will be releasing another this fall. The article also misspelled Melissa Tumas' name. We regret the errors. 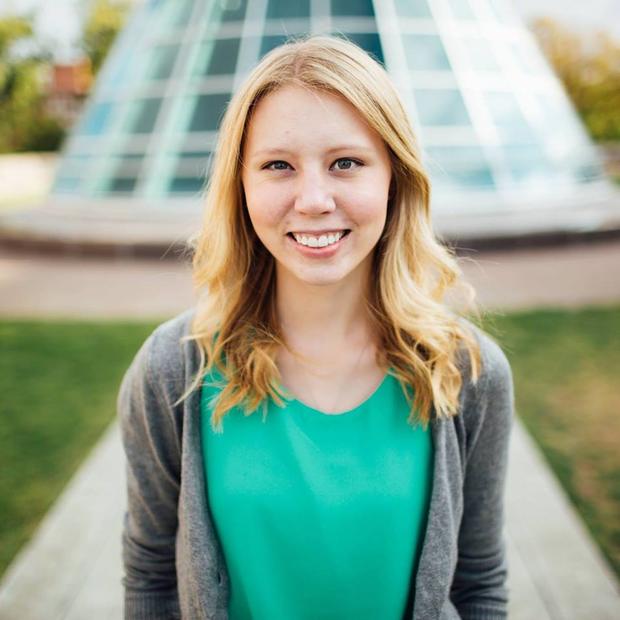 Megan Murnane is a freelance journalist based in the Seattle area and recent graduate of Washington State University. You can follow her on Twitter @MeganMurnane and read her other work at http://meganmurnane.wixsite.com/megan-murnane. Have an investigative tip? Contact her at megan.l.murnane@gmail.com