Funeral for a piece of Seattle’s atomic past 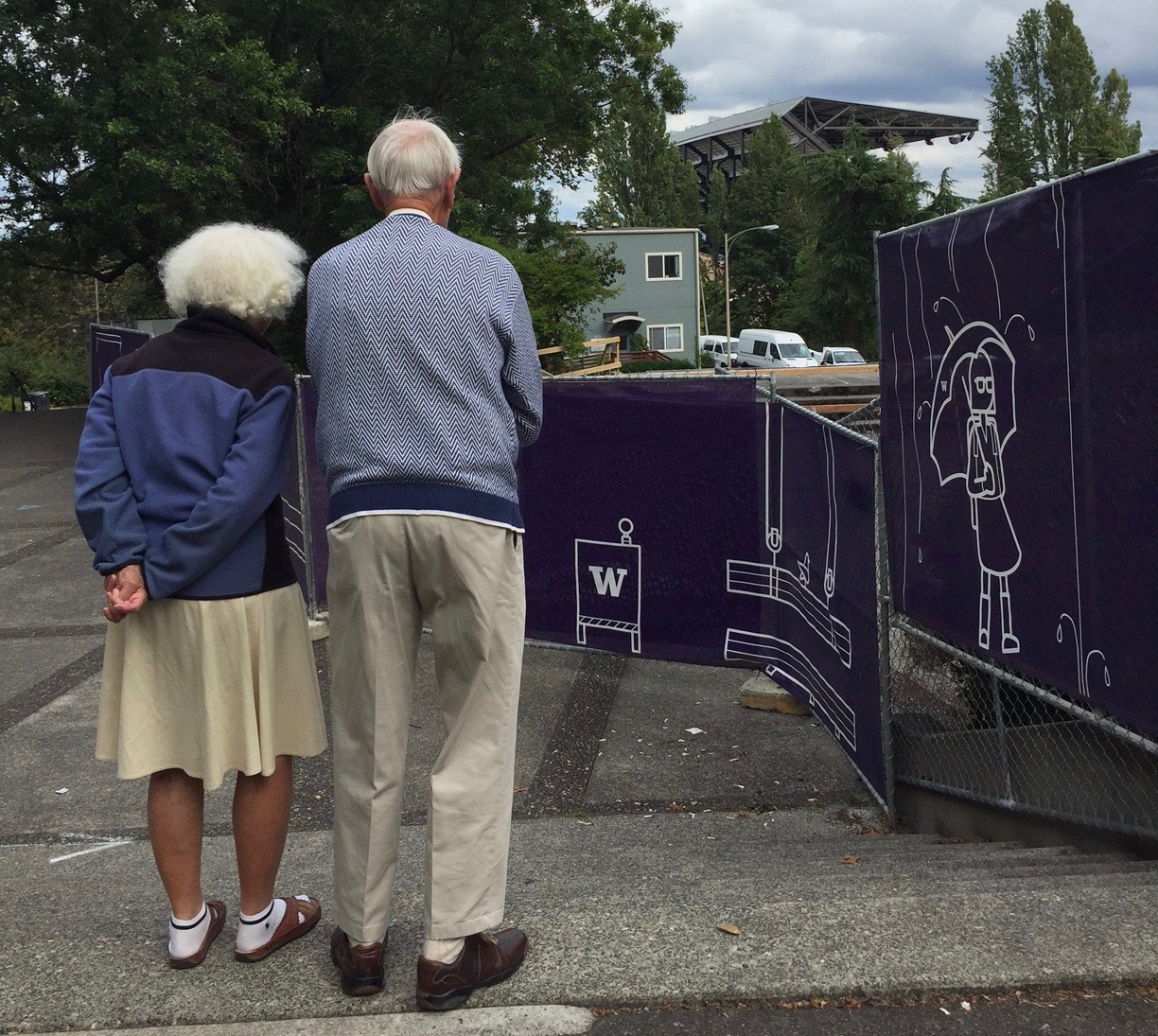 Daniel Streissguth, one of the architects of the More Hall Annex, and his wife look at the place where he building once stood.

How do you lay a landmark to rest?

Holding a wake is one idea. Advocates of the saving More Hall Annex, aka the Nuclear Reactor Building, at the University of Washington did that earlier this week.

The structure had been subject to an 8-year struggle — covered extensively on Crosscut — between preservationists and UW officials who wanted the building demolished. The university got its way in July after a court found that the building was ineligible to be landmarked by city ordinance, even though it was listed on the national and state registers of Historic Places.

That ruling is being contested, but in the meantime, demolition crews leveled the Nuke building to make way for a new computer Science & Engineering structure.

Black-clad preservationists in mourning over the loss of the building showed up on campus at the former site of the structure with a TV camera crew from KOMO and a mock coffin. One woman, whose father had been part of the Manhattan Project, lamented the loss of the opportunity to tell the story of our city’s connection with the nascent nuclear industry.

When I first covered the controversy over the structure nearly a decade ago, I remember the enthusiasm of a historian for the National Park Service who was excited about preserving the Nuke building as a place to tell the atomic story in Seattle. Some advocates had urged that the building be used for that purpose, and what better place than on a university campus?

At the wake on Tuesday, Chris Moore of the Washington Trust for Historic Preservation recapped the struggle to save the building, and gesturing toward the empty place where it once stood, remarked on how quickly we forget. When you remove a historic building, its absence leaves a big hole in the collective memory. The story embodied in it disappears from view. Such memory holes are increasingly common in a city undergoing an unprecedented building boom.

Also attending the wake was one of the surviving members of the building’s amazing design team, architect Daniel Streissguth, now in his early 90s. The group of UW architects and designers who conceived the one-of-a-kind structure included Wendell Lovett, Gene Zema and artist Spenser Moseley, all part of what was called The Artists and Architects Group (TAAG) that combined the UW’s creative talents on the project. Streissguth did the architectural drawings and remembered the excitement of the UW being one of the first universities in the nation to get a “teaching reactor” to train the first generation of nuclear engineers. It was a big deal, he said. It was up and running by 1961.

Streissguth was not happy to see in demolished — the only thing visible behind fencing the UW had erected around the Nuke building’s former site are the concrete stairs to the slab it once sat upon.

Despite the originality of its design, the Nuke building’s looks did not appeal to many opponents of the project. The architectural school of Brutalism with its heavy concrete structures is not necessarily an aesthetic favorite. Fans of the building — a group called Save the Reactor — handed out buttons and stickers saying, “Don’t Hate Me Because I’m Brutal.”

A UW grad student, Abby Martin, had been the first to take up the building’s cause when the UW planned to demolish it in 2008. Her efforts resulted in it being listed on the State and National Register of Historic Places. She was at the wake looking sad, not quite believing it was gone. We discussed the dilemma of saving buildings that might not win a beauty contest. Beauty is way down the list of determining historical significance, she said.

After words of remembrance, the mourners posed for a group photo, then four pallbearers hoisted the mock coffin on their shoulders and everyone proceeded across campus to a pub on The Ave to finish things properly with a drink.

The KOMO-TV reporter said the story would be on the station’s 11 o’clock news that night. “It’s not every day people have a funeral for a building,” she said.