Hipsters are ruining our farmers markets 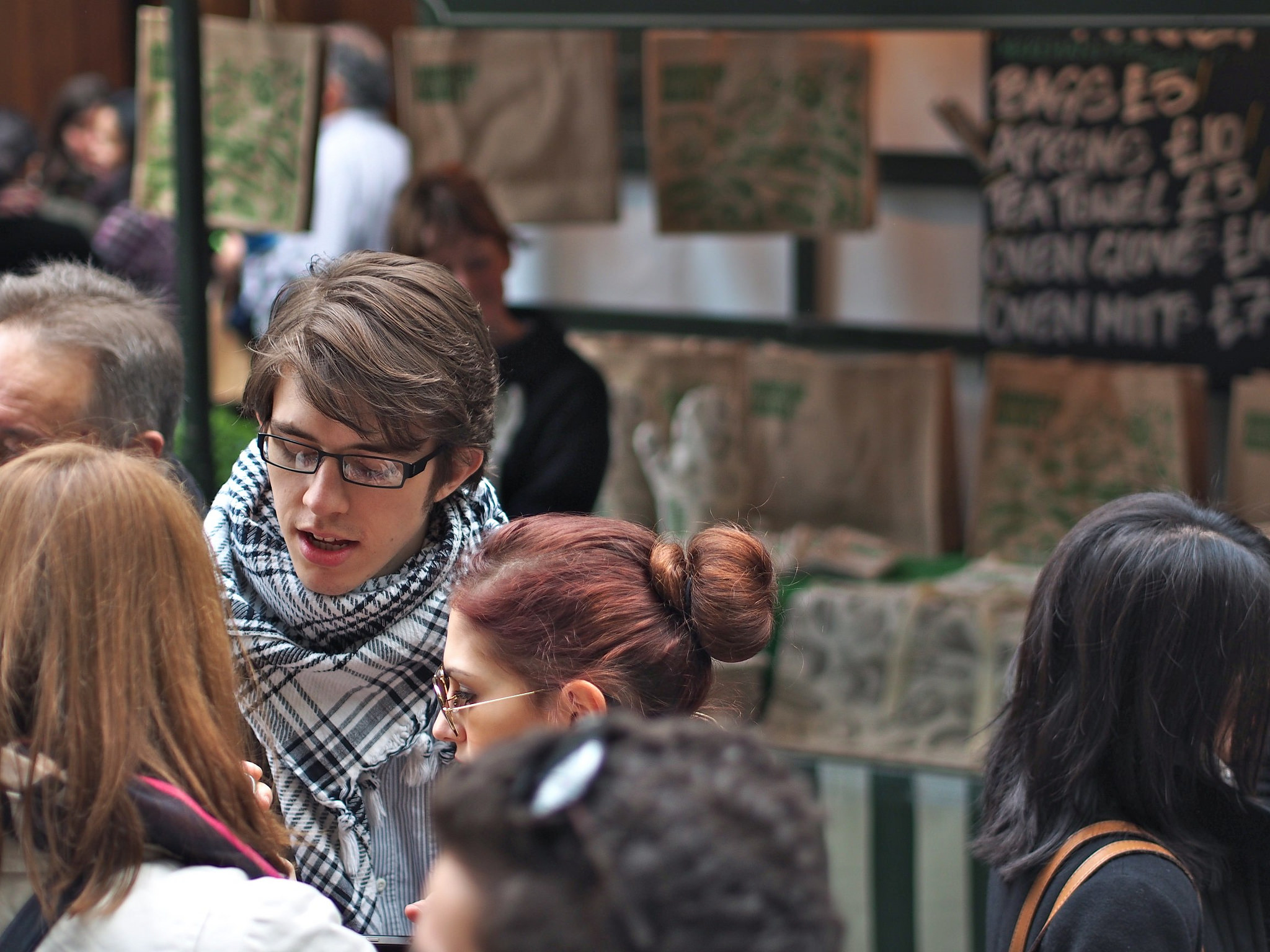 from Writers on the Range

People go to farmers markets for many reasons. The jovial, wholesome atmosphere makes people feel good about their communities and the hard work put in by area farmers. Sometimes, we even want to buy something. But actually purchasing food is becoming an increasingly rare act, according to a recent Washington Post article.

As one grower put it, the market has gotten more crowded than ever, but his sales have plummeted. The most likely culprit, I assumed, must be the influx of young, hungry farmers stealing market share from the aging lions who built the locavore movement. Indeed, census data from 2012 suggests that the number of farmers selling directly to consumers — presumably at farmers markets — is on the rise, despite a decline in the overall farmer population. So I was puzzled about the root of the problem.

A farmer friend in my hometown of Missoula, Montana, said he didn't blame the competition for his woes. Instead, he blamed the "hipsters" for sucking the oxygen out of the market. By hipsters, he meant people who come to the market but then don't end up buying much produce.

Sipping on their lattes, deep in conversation, they care more about the scene than the cilantro. They might purchase a breakfast taco, he observed, but no basil. Maybe a pint of strawberries, but no rhubarb. And in their unhurried schmoozing they clog up the aisles like arterial plaque, impeding the flow of serious shoppers looking for actual produce. But that's if the serious shoppers can even get to the market in the first place, because parking stinks.

Missoula provides a laboratory for testing the idea that an invasion of hipsters can hurt vegetable sales at the market. For years, the Missoula farmers market was agonizingly strict about which items could be sold. For instance, only raw plant materials were allowed: No pickles. No hot food. No meat. Not even a hide from a farmer's own sheep. Nonetheless, it was a nice market, everyone loved it, and it got so big that another one opened nearby, also on Saturday, to get in on the action.

From the get-go, the new market was a showcase for the free market. Everything was for sale, including prepared food, face painting, balloons, hot chocolate, baked goods, fresh, frozen and smoked meats, and (of course) coffee drinks. The feeling was strong that this was what the old market had always "wanted" to become, if only the folks in charge would have let it. The new market was everything that we, the shoppers, desired: a diverse, festive atmosphere rooted in, but not shackled to, farm-fresh produce.

The once-booming original market was suddenly a backwater, and you could almost hear the cheers and laughter drifting over from its rival. The free market had spoken.

Fast-forward a few years, though, and the original market, amazingly, is still around. I still go to buy certain items from vendors I've long patronized, and I'm not alone. That market, which many of us had left for dead 10 years ago, now offers a surprisingly valuable commodity: a peaceful, pleasant shopping experience.

The new market is bigger, with more vendors, and offers a lot more choices of produce and other stuff. But it's always jammed. If you have kids in tow, it also feels like more work to visit.

"It's more of a social event than a shopping event," says Stephen Paferi, a grower at the new market who jumped ship from the other one. Like many who had done the same, he's begun questioning his choice.

Another farmer, Mike Duda, observes, "They are here for the scene, for the coffee and breakfast sandwich or whatever." His loyal customers, he says, have to arrive early to avoid the craziness. "They hate the crowds. I can't believe how many people bitch about the crowds. The regulars show up early."

There is no doubt in Duda's mind that the people there for the scene are suffocating the market. "People with strollers; four people having a conversation, which is fine, but it's frustrating. And if you're a customer that wants to go to the farmers market and get some food, you're like, ‘Nah.'"

Josh Slotnick sells produce at both markets. He told me that he does twice the business at the original market that he does at the new one.

If farmers can earn more at the relatively dead original market than at the bustling new version, something must be amiss. Surely the fierce competition plays a role, but the case against the hipsters is compelling as well. In Missoula, we're just lucky we have both.

Writers on the Range is the opinion service of High Country News.

Ari LeVaux writes about food from his home in Montana.