Interns go door to door, preaching the gospel of recycling 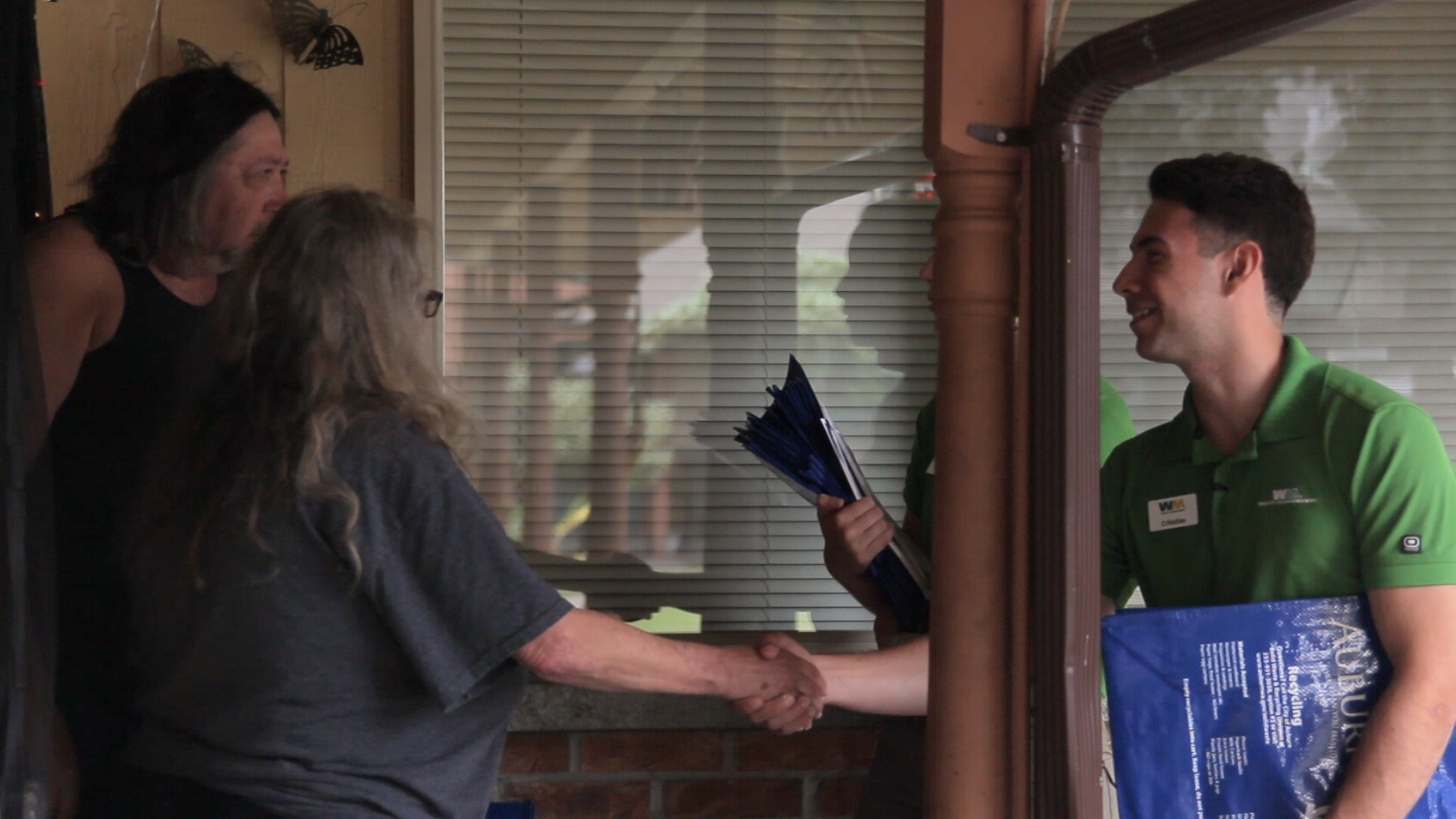 Intern Christian Cuellar shakes the hand of a resident at Parkview apartments in Auburn, Washington.

This story is a product of KCTS/ EarthFix.

If you live in an apartment complex in the greater Seattle area, you might open your door this summer and find a pair of college students in green polos on your front step. They won’t try to get you to vote, buy their wares or convert you. They just want you to recycle.

Waste Management Northwest, Washington’s largest waste service provider, set out to do something about this downward trend. Its solution? Send out a dozen interns to make a few thousand housecalls.

“Waste Management started this program four years ago in order to communicate with the community on a level that we felt would be very impactful,” said Hannah Scholes, Waste Management Education & Outreach Coordinator. “We go out to 11 different cities throughout the Puget Sound, so it’s a jampacked summer.”

Waste Management looks at curbside collection data to find out who puts what in which bin. Then they work with each city or county to determine what demographics most need educating.

In Portland, for example, Waste Management works with the City of Portland’s own outreach program that sends college students door-to-door at apartment complexes to encourage residents to recycle.

Lang said the Puget Sound’s 12 interns have played an important role in gathering data about how different communities handle recycling.

“Yes we’re there to educate, but we’re also learning a great deal,” said Lang. “And we are applying these learnings everywhere urban density is on the rise.”

In the Puget Sound area people in single family homes recycle about 60 percent of their waste. Residents in multifamily complexes or apartment buildings, on the other hand, recycle closer to 20 percent.

The high turnover rate in multifamily homes is one of the challenges, Scholes said. It can take a while for a family to establish a recycling routine, and then they move out and someone new moves in. Plus, if even just one person is putting food, diapers or other trash in the recycling, the container’s entire contents will go to the landfill instead of being recycled. And it’s next to impossible to figure out who the culprit is because all the residents share a single bin.

Other barriers to recycling include inadequate facilities and limited English proficiency. In King and Pierce counties where about one in 10 people speak little to no English, Waste Management has made multilingual outreach a priority.

“I think that language is definitely a barrier however I believe that it also comes with culture and customs, whether it be in their culture to recycle or not,” Waste Management intern Crhistian Cuellar said.

It’s no accident that Cuellar, who is fluent in Spanish, is canvassing neighborhoods with a high number of Latino residents. Waste Management recruits interns to match the demographics of its customer base, Scholes said.

“I think that face-to-face interaction is necessary,” intern Audrey Taber said. “It’s kind of like we’re holding them accountable in a way. They see that somebody cares if they’re recycling or not.”

The latest numbers for recycling in Washington have yet to be released, so it’s hard to measure the impact. But Waste Management estimates their interns have had about 50,000 conversations about recycling with residents which has resulted in a 7 million-pound increase in recycling since the program began. That’s nearly 2,500 garbage trucks worth of waste that did not end up in the landfill.