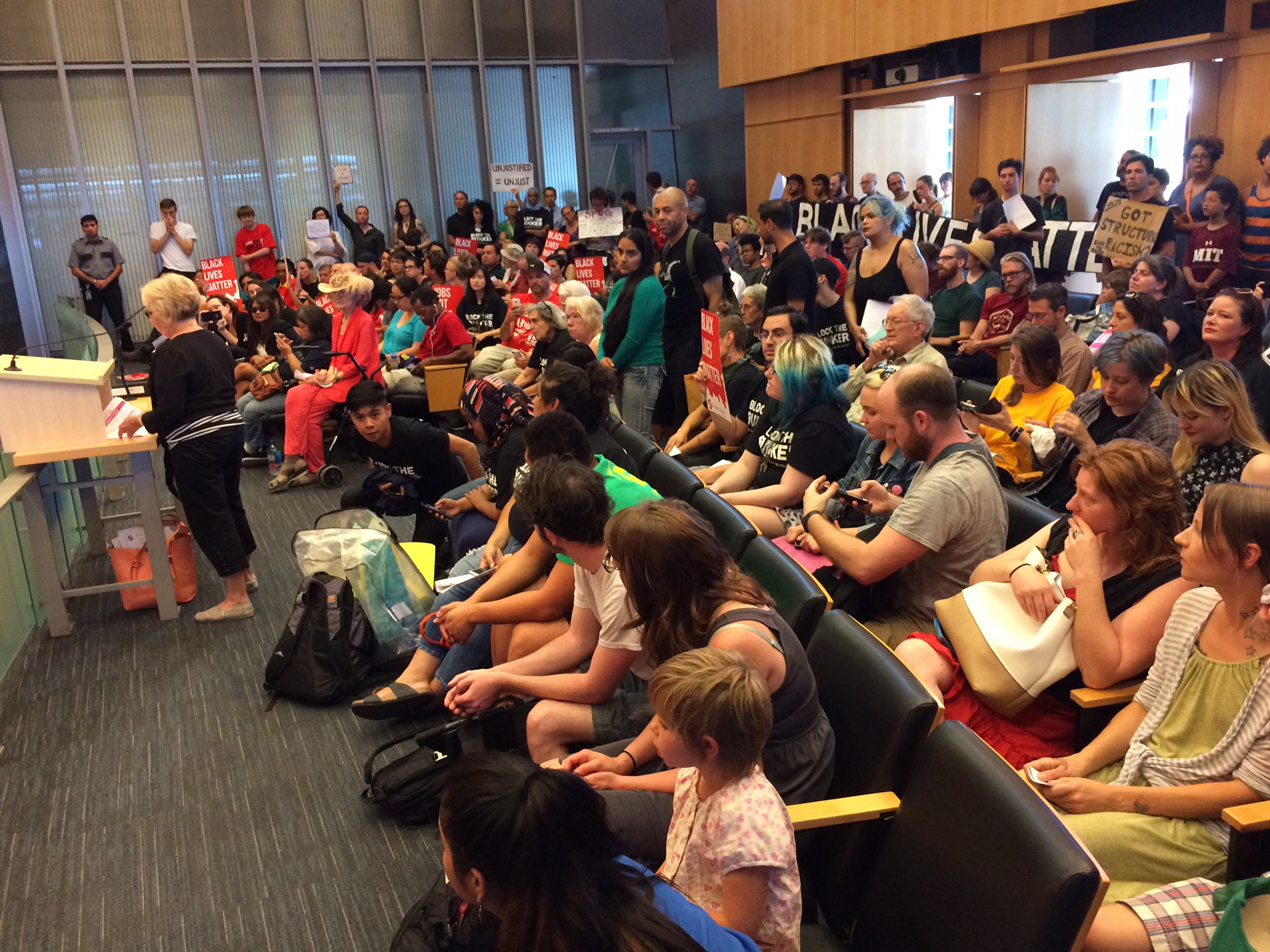 Part of the crowd at Monday's council meeting

Faced with a chamber full of people loudly opposed to a new North Precinct Police Station, the Seattle City Council on Monday plowed ahead with a resolution declaring its intent to budget for construction of the facility.

Supporters of the resolution said it would set a process to assure review of the costs, the appropriateness of the design and how it fits with the city's racial equity efforts and social justice policies. A budget won't be set until November, but signs point to further cuts in a project once estimated to cost $160 million and recently tagged at $149 million.

The raucous meeting was unlike anything seen recently in the council chambers, with frequent shouting, a number of chants, a crowd pushing its way to the doors during the middle of the meeting and councilmembers becoming irritated with the crowd behavior. At one point, Councilmember Debora Juarez paused to say, "Don't flip me off."

Dozens of speakers objected to the precinct station, calling it a military-style "bunker," labeling it the most expensive such project in the nation and complaining that the money would be better spent on creating jobs and helping the homeless. Many questioned how council members could say they supports social justice or the Black Lives Matter movement people of color while endorsing the police station.

The resolution followed weeks of cage rattling from opponents of the plan. The Seattle Police Department and proponents of the new station have countered that the North Precinct serves more of Seattle than any other area. And the emphasis on community policing and de-escalation, they say, has created more demand for common space to be used by the entire department, particularly for training. Plus, the station must withstand a 9.0 earthquake.

As the concerns mounted, Councilmember Lorena Gonzáles pressed for cost savings. But Gonzalez, who holds one of two at-large council positions, also indicated that she was work on a resolution that would have had the council state its intention to budget money for long-discussed project later this year, as long as the cost was reduced and concerns about racial equity were addressed. The city's finance department said it could trim $11 million to hold the price tag to $149 million.

The talk of a resolution brought a crowd of opponents to City Hall on Monday, raising objections that had been seen at earlier north Seattle community meetings where an enormous outcry spawned a suddenly popular hashtag, #BlocktheBunker.

Many of those at the council meeting said they came from north Seattle, but their comments and those of other speakers suggested that the opposition is coming largely from social justice activism both there and across the city. Several speakers talked of difficult person experiences with police in Seattle.

When Council President Bruce Harrell, who had repeatedly extended the comment period, tried to end the discussion, one speaker said everyone should be allowed into the main chamber, and a crowd — apparently people who had been directed to an overflow room — quickly gathered outside the doors. Much of the audience in the Council Chambers took up a chant, "Let them speak."

Harrell declared a recess to restore order. Before resuming the meeting, he told the crowd that the council's ability to vote on another social justice measure — an initiative to protect hotel workers from harassement — depended on being able to finish the meeting. When the council reconvened, there was some more testimony and chanting before the council was able to get to work on its agenda.

When the resolution came up for discussion, González explained changes, which she and other councilmembers had developed over the weekend. Several councilmembers said they could only support the measure because the changes took away any specific price tag to open the way to further cuts.

Councilmember Lisa Herbold said she couldn't support $149 million for the project, but she said the resolution will open up both further examinations of the cost but also a path to use a racial equity tool kit — essentially, policies and measures to ensure fairness in the precinct facility's operation and design. Addressing the "bunker" talk, she said she wasn't aware of anything that makes the facility any more bomb-proof or bulletproof than other police facilities.

Addressing the crowd, Herbold said, "We clearly have work to do and we need you to help us."

Some of Councilmember Tim Burgess' remarks were essentially drowned out by complaints from the crowd. Juarez, shortly before making the remark about being flipped off, had asked the crowd to let her talk about her views, saying, "Please be respectful because I wasn't raised the way you were apparently raised." That seemed to fuel rather than calm the anger.

Councilmember Mike O'Brien praised his colleagues' work on the resolution but said he thought the community needed time to examine the new version."The community has not had time to digest these [amendments]," he said. "There are productive conversations that can be had." He failed to win approval for delaying a vote until mid-September, and after several of his statements earned big cheers from the crowd, he ended up being the only vote against González's measure. Councilmember Kshama Sawant wasn't present.

Final approval of the project won’t come until the budget process this fall.