Salmon farming on the rise in Washington 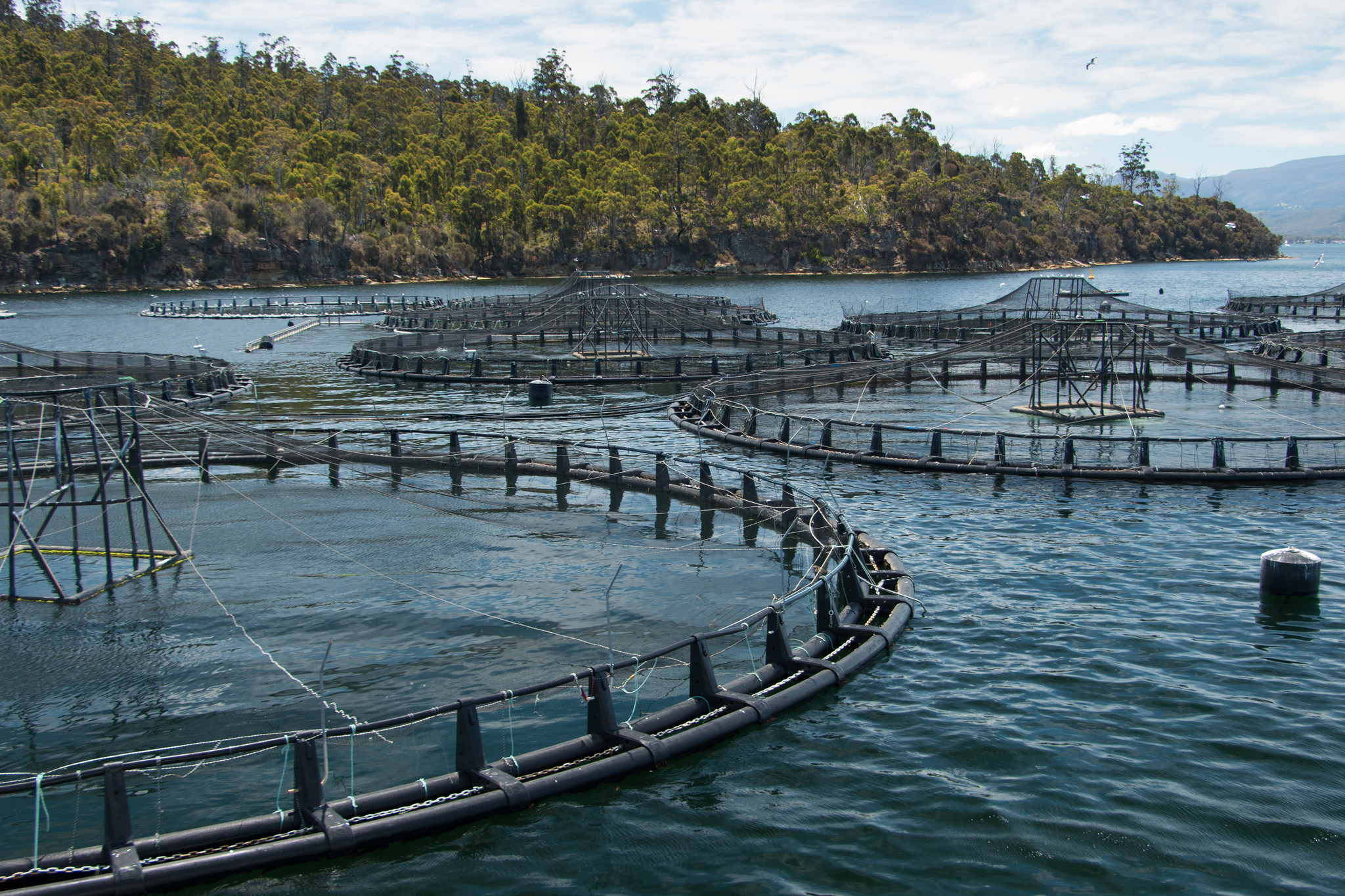 Human travelers have I-5 and I-90. Salish Sea salmon have the Juan de Fuca Strait.

It’s the route that they all swim on their way to and from the wide Pacific — the salmon from the Elwha and all the rivers of Puget Sound, plus many salmon returning to Canada's Fraser River, which are the main local food source for Puget Sound orcas and have always formed the bulk of Puget Sound’s commercial catch.

Although it has its critics, salmon aquaculture isn't new in Puget Sound — and certainly not elsewhere. British Columbia aquaculture produces salmon worth nearly half a billion (Canadian) dollars a year. And B.C. is a minnow compared to the salmon-raising industries of Norway (where salmon aquaculture is booming) and Chile (where it's not.)

Icicle already has eight salmon aquaculture operations in the Sound, including one at Port Angeles tucked in behind Ediz Hook. The company’s plan for putting pens out in the Strait has been driven by U.S. Navy plans to expand its base on Ediz Hook, which won't physically displace the existing pens but will ruin the neighborhood for salmon. Pile driving for the Navy project, scheduled to begin late this year, would actually kill salmon in nearby pens. Icicle has decided to move its operation.

Under Icicle’s planned new development, 14 circular pens, each 126 feet in diameter, would be kept in place by a network of two-to- four-ton steel anchors. The new pens would produce 20 percent more salmon than the old. They would be the first anchored this far offshore in Washington waters.

Actually, they would be the first anchored anywhere in Washington for many years.  And they might not be the last.

Critics have worried for years that pen-raised salmon will escape, leading to competition and even interbreeding with wild populations. They also worry that captive fish will infect wild salmon with disease. And they point to the wastes that can build up in water and sediment below the pens. The prospect of new pens in the Strait may bring fresh attention to some of these old concerns.

Cedar Bouta of the Washington Department of Ecology (DOE), which regulates water quality, disputes the longstanding idea that that net pens are basically aquatic feed lots. Bouta says that net pens do, of course, have to meet water quality standards — albeit standards that contain exemptions designed to make finfish aquaculture feasible here.

The Icicle project will require a national pollutant discharge elimination system permit. Under the permit, the company will have to measure the pH of the water column and pollution in the sediment beneath its pens. The impact of a pen depends a lot on location, Bouta explains. The deeper the water, the stronger the current, the more the waste will be dispersed. The new pens in the Strait would have deeper water and stronger currents than any of the existing ones.

In addition, she says, Icicle voluntarily conducts underwater video surveillance, so that if feed is coming through the nets uneaten, it can suspend feeding. It also leaves nets fallow every couple of years.

What about escape, a particular fear here because of the existence of salmon species that are already threatened? Farmed Atlantic fish have escaped. But they haven't survived long. Icicle will need a plan to prevent escapes and one to recapture fish that do escape, but Bouta says escapes don't really pose a threat.

She says 7.5 million Atlantic salmon have been released here since the 1940s, when some people actually thought it would be a good idea to establish populations of them here. None survived. The National Marine Fisheries Service (NMFS) has assured the state that interbreeding or establishing new populations isn't an issue. When penned salmon escape," Bouta says, "they tend to stay near the pen. And they're good eating." So fishermen, granted a special season, are quite happy to catch the escapees.

Some risks may be exaggerated in popular imagination. However, Bouta says, "disease is a concern." Four years ago, infectious hematopoietic necrosis virus (IHNV) swept through Icicle's pens off Bainbridge Island. To control the disease, the company slaughtered and sold the fish — the pathogens weren't dangerous to humans — and moved the pens.

To put new net pens in the strait, the company will have to clear a long line of regulatory hurdles. In addition to the state DOE, Clallam County, the U.S. Army Corps of Engineers and the Coast Guard will all weigh in. Finally, the state Department of Natural Resources will have to grant a lease. The different agency approvals aren't really coordinated; state agency staff members just finished two days of meetings in Olympia to talk about coordinating the ways they permit and monitor net pens. (Washington Department of Fish and Wildlife, which oversees disease in farmed salmon, has no place in the queue.)

Under the Endangered Species Act, if the new project is likely to jeopardize a threatened or endangered species, National Marine Fisheries Service will have to formally consult. But NMFS and other agencies may conclude that no formal consultation is needed. If so, bet on the issue winding up in federal court.

Failures to consult on the impacts of existing net pens have already wound up in federal court. Wild Fish Conservancy, which has warned that the Strait proposal would open the door to pens throughout the region, last year sued NMFS and the Environmental Protection Agency (EPA). It is challenging NMFS’ 2011 determination that Puget Sound commercial salmon farms are not likely to have any adverse effect on threatened salmon runs and what it calls "NMFS’ and EPA’s failure to reconsider that determination in light of the 2012 IHNV outbreak."

Washington created rules that exempt fish farms from water quality standards. If EPA thought the operation of fish farms was likely to jeopardize threatened or endangered species, it had to consult formally with NMFS. Instead, EPA decided the action wasn't likely to jeopardize listed species. An informal consultation took place, and NMFS concurred. The plaintiffs argue that the failure to consult formally was arbitrary and capricious. They also argue that after the 2012 disease outbreak — which amplified the amount of virus in the water right when juvenile salmon were migrating through the net pen areas —raised red flags about potential impacts, both agencies violated federal law by not formally consulting.

The impact of disease on wild fish has become a much more public concern north of the border. British Columbia has over 70 salmon aquaculture operations, which are both regulated and promoted by Canada's Department of Fisheries and Oceans. It also has the Fraser River sockeye. An enormous sockeye run in 2010 notwithstanding, Fraser River fish have been in obvious trouble for decades. After a disastrously small run in 2009, the Canadian government set up the commission to figure out what was going wrong.

The so-called Cohen commission didn't come up with a simple answer. It did suggest that the same government agency shouldn't both regulate and promote aquaculture. And it did point to potential links between aquaculture and disease in wild fish.

The issue of salmon diseases became highly politicized. Scientists who had found — highly unwelcome  — salmon pathogens in British Columbia told Cohen that they felt Canadian government officials under the Conservative Party had tried to intimidate them. A Nanaimo-based government molecular geneticist, Kristi Miller, was told not to publicly discuss her work. Canada's current Liberal government has decided that Miller and other scientists should be free to speak with the press.

Miller is now helping lead what has been called "the most comprehensive study of salmon health ever undertaken," looking at 45 different pathogens in 26,000 fish. "One of the things that came out of Cohen was the need for strong and objective science," Miller explains in an interview. Keeping the research objective has been tricky: "One of the difficulties is that most fish veterinarians [in B.C.] are trained to work with industry." Therefore, "we brought in a histopathologist out of Scotland and one out of Italy. Our work on epidemiology is all being done out of Prince Edward Island."

It's long been suspected that any disease that costs a salmon its competitive edge may quickly make it something else's dinner. But where's the evidence?

Miller explains that researchers have been going to great lengths to find it. They're even stealing fish from birds. For example, she says, they'll check the salmon smolts in rhinoceros auklet nests to see how many of them contain pathogens. And they’re establishing a link between disease and predation. Many scientists had assumed it existed, she says, but no one had shown it before. Now, she says, it's clear that "infection status does influence the risk of predation."

Does all that research, which has the support of both industry and environmental groups in Canada, have any bearing on this side of the border? The same biological mechanisms work here. But Miller's teams are still at work researching the spread of disease from farmed salmon to wild ones. And how soon the information being developed in B.C. might influence the government agencies or courts on the U.S. side of the Strait remains to be seen.