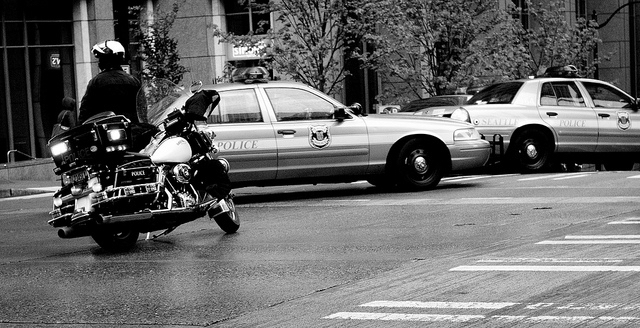 The Seattle Police Department and Seattle Information Technology say that some 2,000 in-car video recordings from July 13 and 14 have gone missing. The problem, said Chief Technology Officer Michael Mattmiller in a conference call with reporters Tuesday, was a bug in the city’s storage.

As a result, when police officers attempted to transfer video to storage, the footage was never captured.

Over the course of those two days, officers arrested a 19-year-old for a carjacking in Capitol Hill, on Melrose Avenue. A man in an orange vehicle in North Seattle was arrested for trying to lure a 12-year-old girl. In total, SPD reported on its blog, the lost [in-car video] recordings also included 89 arrests, 138 traffic citations and 95 oral warnings. There were "five incidents involving low-level type-one uses of force (the lowest level).”

SPD and the city recognized the issue almost immediately, on July 15, and they say that they frantically set about retrieving what they could. But on the conference call, which also included SPD’s Police Chief Kathleen O’Toole, Chief Operating Officer Brian Maxey and Public Information Officer Sergeant Sean Whitcomb, Mattmiller said the more than 2,000 videos are believed to be permanently lost.

Police believe that 25 percent of the videos may have contained some amount of material that would have been useful as evidence.

In a later email, Mattmiller said, "Over the approximately two day period during which we experienced the technical issue 5,510 videos were initially determined to be lost. We were able to recover 3,227 videos for a loss of 2,283."

When asked during the conference call why, if the issue was discovered in July, it was only being made public now, Mattmiller said officials wanted to fully understand what had happened and recover as much video as they could.

Chief O’Toole added, “We wouldn’t release the details of the investigation before the investigation was complete. … This is a technology glitch. We want people to know that there isn’t anything sinister here.”

SPD representatives stressed the transparency of the department, pointing out that most police departments don’t even use dashboard cameras. While that may be the case, technology and records collection are major points of emphasis as the city and the department move through a federally driven consent decree to reform the department. For years now, the independent monitor overseeing those reforms as well as several directors and auditors of the department’s Office of Professional Accountability have hammered on the importance of getting video collection — and the review of those archives — correct.

And, as the department aims to begin rolling out body-cameras by the end of 2016, the stakes seem especially high.

The new revelation is a reminder of how difficult incorporating technology can be for an organization as large as the Seattle Police Department. In 2014 it was widely reported that the dashboard cameras were routinely dropping footage, glitching out for periods of seconds, minutes and, occasionally, hours.

Crosscut reported earlier this summer that, despite reports the issue had been fixed, the cameras were still routinely cutting out. Mattmiller said Tuesday that dropped frames and the most recent lost footage do not appear to be related — one was an issue with video collection, the other with storage.

When it comes to implementing the planned body camera footage, the unanswered questions remain disclosure and storage. Disclosure laws as they are currently written do not adequately account for the many millions of hours of recordings already being collected by dash cams. Among advocates for body cameras within the department, there is hope that technology will some day help answer this question, but it’s not there yet.

On storage, Mattmiller wasn’t worried. The city has put out a request for proposals to expand capacity. In the meantime, the city should have enough space to last a year or more. Eventually, the city could switch to more cloud storage, which would both open up additional space and also create a safety net of backup that could avoid lost records.

But dashboard video cameras have been in use for many years now, so the fact that it is still having issues like the July problem is certainly a point of concern.

Chief O’Toole said in the conference call that she was unaware of this particular problem cropping up before and said she’s confident it was a one-time bug that’s been fixed. Police COO Maxey said that the department plans to stick to its planned rollout of body cameras, equipping bike officers by the end of this year and the rest of the department by the end of 2017.

Tuesday’s announcement is also revealing of another, yet unsolved issue: oversight. The only reason the public knows about this lost footage is that the department chose to reveal it in the name of transparency, something that highlights the fact that there is still no position that could have independently caught this glitch. The City Auditor’s office is broad in scope and narrow in resources. The auditor of the Office of Professional Accountability is expected to focus on discipline investigations of police officers. And the consent decree monitor is only hear so long as the city is still under a consent decree. When it comes to permanent and unimpeded administrative and systemic oversight, there is nothing.

The plan moving forward appears to be to create an office of inspector general that would fill this void. But that still hangs in the void as legislation for permanent police reform is still being negotiated. In the meantime, it's on the department to decide what and when to reveal issues.