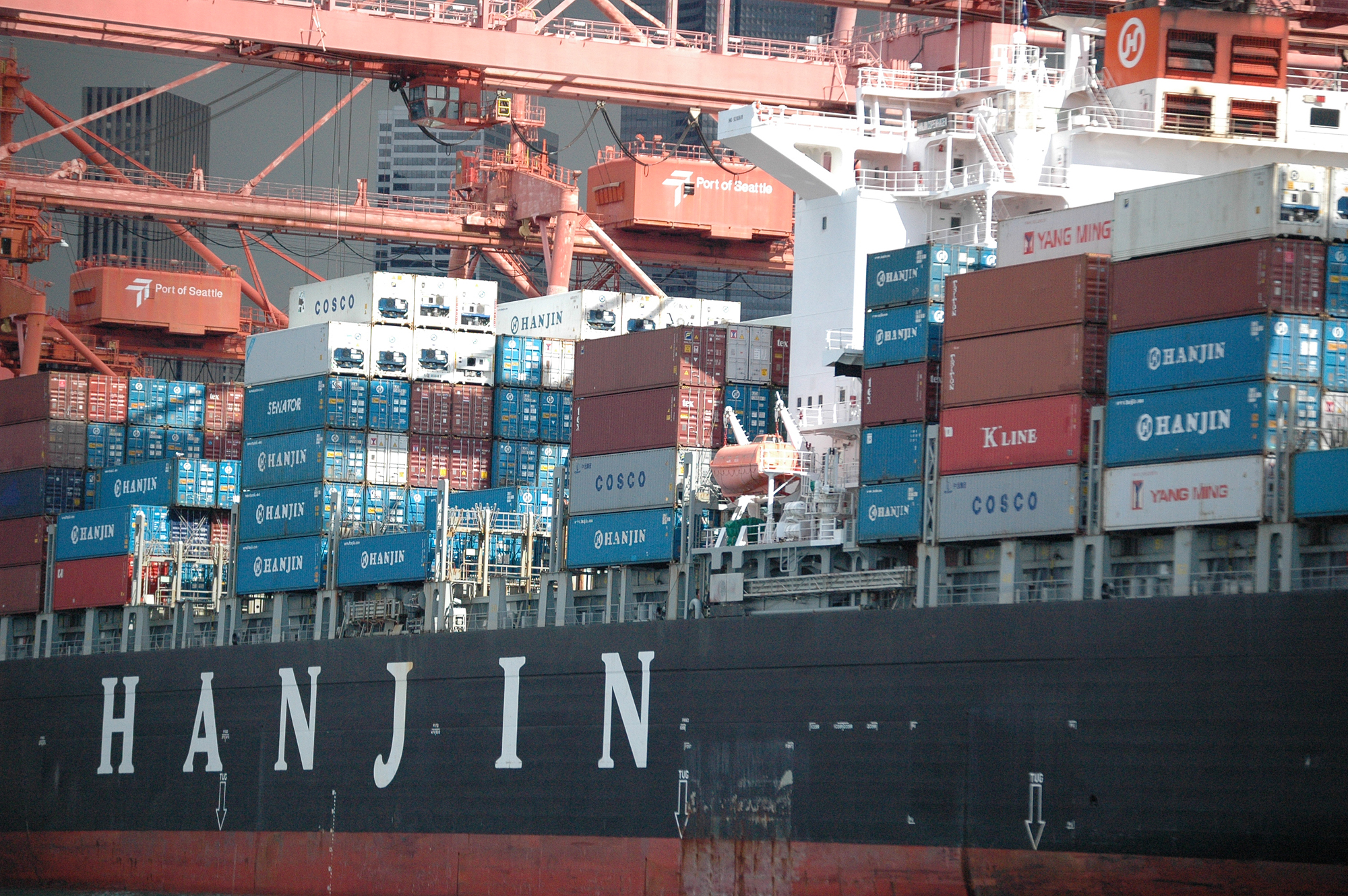 A container ship at the Port of Seattle, one of the nation's largest movers of products into and out of Asia.

The sing-song cadence of activist chants insinuate like a jingle. At the Showbox in Sodo on Friday, it was “hell no, TPP!” chanted to a beat, referring to the Trans-Pacific Partnership (TPP), the proposed trade agreement between the United States and 11 Pacific Rim countries, and the centerpiece of President Obama’s “pivot to Asia” strategy. It was “no more NAFTAs!” a cry echoed by young people, many born after implementation of the North American Free Trade Agreement.

Trade-deal dissenters trumpeting anti-trade slogans in the most trade-dependent state in the country: This is Seattle, mind you.

A time squeeze has ratcheted up the volume and urgency for opponents of TPP, which include many environmental groups. Both sides predict that Obama will elbow for its passage during the fall lame-duck session of Congress, saving his potential presidential successors (both of whom have said they oppose the deal) from having it on their plate.

“Trade policy and climate policy shouldn’t be in conflict,” Michael Brune, the executive director of the Sierra Club, said in an interview with Crosscut. Brune flew up from San Francisco to participate in the club’s “Rock Against the TPP” teach-in and concert. The concert tour includes stops in Portland and San Francisco, a number of progressive organizations as co-sponsors, as well as local alt-weekly The Stranger.

He points to one of the agreement’s primary sins of omission.

“In all of TPP, there is no mention of climate,” he said. “Zero.” For Brune, tweaking the trade deal is a non-starter. “It needs to be scrapped.”

Brune doesn’t see a problem with a trade-centric state bucking an agreement that promises to goose the amount of trade that North America does with Asia.

“I’m very confident our message is resonating in Washington,” he said. “Our country thrives on trade, which is why we need to strengthen climate. But that’s not how [TPP] currently works. It should help.”

In mobilizing trade-deal skeptics, the Sierra Club hopes to capitalize on recent wins, such as the attention given to the area’s “kayaktivists’” when they pushed to halt oil drilling in Alaska’s Chukchi Sea. The anti-TPP campaign also piggybacks on the club’s successful anti-coal train campaign in the Northwest, which targeted coal-export facilities such as the Gateway Pacific Terminal at Cherry Point. Unlike the current anti-TPP effort, coal exports divided organized labor, with several heavyweights such as the Pierce and Snohomish County Labor Councils and Seattle/King County Building Trades supporting Gateway.

On Friday, the push took the form of an eclectic concert featuring a mix of musicians and performers, including a former star of the TV series “Lost” and the talented but inartfully named punk band Anti-Flag, took the stage.

“We care about trade deals for the many, not for the few!” shouted actress Evangeline Lilly, recently seen in the “Hobbit” movies. The crowd roared, hands heavenward.

Nothing quite says “cognitive dissonance” than a protest that pulls in Teamsters and members of the Sierra Club, groups that have not always seen eye to eye.

While sponsors billed the event as a “nationwide uprising and concert tour to stop the biggest corporate power grab in history,” it didn’t draw the kind uprise-adoring anarchists who hijacked the 1999 WTO protests. The crowd was a peaceable mix of millennials, the occasional Gus Hall lookalike, and Baby Boomer activists of the Ecclesiastes, nothing-new-under-the-sun breed.

In anticipation of the concert, the Washington Council on International Trade (WCIT) issued a statement from its president Eric Schinfeld.

“The truth is the TPP makes pioneering leaps toward high-standard trade, ironically addressing many of the TPP protesters’ concerns,” Schinfeld said. “For instance, the TPP will raise labor and environmental standards in participating countries and will protect the U.S. right to regulate in the public interest for the environment, health and safety.”

To underline the pro-TPP narrative, the WCIT produced a report with the Association of Washington Business forecasting up to 26,000 new jobs in the state with TPP. And as the WCIT’s Ashley Dutta said in an interview, a country such as Vietnam will finally be required to adhere to minimum-wage laws, eradicate child labor, and open the door to collective bargaining.

The Sierra Club and other TPP opponents showcase the failures of NAFTA, including domestic job losses and the demand by TransCanada that the United States pony up $15 billion for the cancelled Keystone XL pipeline. Supporters counter that the TPP’s public-interest exception gives the agreement more teeth, and that NAFTA’s shortcomings have informed American negotiators on what not to allow in it.

There’s a lot to absorb. The TPP is hugely complex, took years to negotiate and, much to the chagrin of transparency-partial activists, mostly got hammered out in secret. The upsides include jettisoning quotas and tariffs, dealing with the challenge of state-owned businesses, and addressing nationality requirements in software, finance and other services.

One of the bigger sticking points is the proposed use of tribunals for companies to fire back at government regulations and court actions. There are concerns that these tribunals will undermine national sovereignty, as well as environmental and labor standards.

Obama’s TPP imperative is summed up by the New York Times. “It is seen as a way to bind Pacific trading partners closer to the United States while raising a challenge to Asia’s rising power, China, which has pointedly been excluded from the deal, at least for now.”

Push-pull dilemmas from the 1970s and ‘80s presage what often happens when Northwest activists take on the national government’s agenda. Seattle Catholic Archbishop Raymond Hunthausen vigorously opposed the Trident nuclear submarine base in Bangor, for example, calling it “the Auschwitz of Puget Sound,” just as Washington communities embraced nuclear-free zones. But Bangor, along with Joint Base Lewis-McChord, grew and new military facilities, such as Naval Station Everett, were constructed.

Brune is unbowed. And he takes an expansive, coalition-building approach that either would have amused or pained past Sierra Club presidents such as David Brower, who were focused like a microscope on environmental issues alone.

“How many here are ‘Fight for 15?’” Brune asked the crowd, referring to the campaign for a $15 minimum wage. “Our fight also is about reproductive rights and human rights everywhere.”

As he continued, caught in the moment, Brune made his pitch. “Organizing, organizing [old Anglo-Saxonism explicative] organizing every day.”

It may be the last, best hope for TPP opponents.