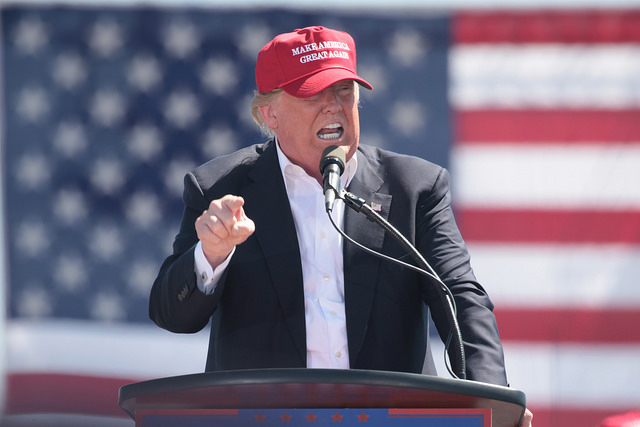 Donald Trump at a speech in March

A GOP talking point of this election cycle is that “political correctness” is killing America. Donald Trump, who is passing through Puget Sound this week, leads the rhetorical charge. “Everybody wants to be so politically correct and they want to do what is right and afraid to do anything. The words are killing us, political correctness.”

I’m not sure Trump knows what political correctness is, let alone how to “cure” it. We all think terrible things. The human mind — my mind certainly — has a peanut gallery that wants to spew judgments everywhere. Sometimes I even believe them, but mostly such internal thoughts and fantasies act like an safety valve for the amygdala. Calling out everything you think or see is spewing. Spewing isn’t defying political correctness, it’s mental defecation.

That said, political correctness is a real thing: an attempt to rewrite the rules of what can be expressed and said. We have a First Amendment, so folks have a right to say anything, even spew. But in the free marketplace of ideas, we also have the right to push back against speech that defies norms and reason, and inflames prejudice.

At its most benign, being PC is simply a form of courtesy, a way of politely respecting differences. At its worst, it’s an attempt to suppress free speech or silence people. Anyone who follows the media on the right or Donald Trump knows they aren’t silenced.

But it’s true that media today gives us a chance to dig into self-selected info niches that limit our exposure to ideas other than ones we’re sympathetic with — you design your own Twitter feed and select your own Facebook Friends. It’s not political correctness that’s harming us, but our unwillingness to entertain thoughts, ideas or even form friendships with people who disagree with us.

I feel I know something about the good and bad of PC culture because I came of age in one of its cradles: The Evergreen State College in Olympia.

The school itself was an act of academic rebellion, and in its early years attracted students and faculty who did not want a traditional education. In the crucible of the early ’70s, it was a soggy haven for rebels, weirdos, activists, utopians, ecologists, artists, outsiders, and frustrated professors who couldn’t make it in traditional academia.

I helped to launch the school newspaper during this period, The Cooper Point Journal. And Evergreeners questioned everything, like: Why should we have a student newspaper? We did get funding from students, but we were also attacked from the very beginning for not taking up causes. The Third World Coalition of students wanted us to publish stories about colonial oppression. The left-wingers considered our devotion to local news some kind of incipient fascism. Feminists questioned sexist ads for beer that we ran. People wanted the paper to be divided into sections for everyone: One page for Third World, one page for gays and lesbians, one page for the far-left activists, and so on.

When I was editor of the CPJ, I didn’t see it that way. I admit, I brought an old-school journalism approach. Newspapers were a hierarchy with the editor at the top. I was a First Amendment absolutist: I believed that writers and advertisers had the right to express any views if the writers met certain editorial standards and advertisers paid.

Some students and faculty pushed back. We needed to reflect the “community,” not notions of journalistic integrity. This was during the Watergate scandal years, so editorial independence was my inspiration.

I learned early on that the professed “tolerance” of Evergreen wasn’t always put into practice. At one of the first all-school events in the fall of 1972, I attended with my large, bushy natural while wearing a policeman’s blue-and-black shirt I had found at the Goodwill. I meant it as theater: hippie wearing a cop’s shirt — who wouldn’t find that absurd (this was in my Dada phase)? But the rumor went around that I was a narc. Why a narc would openly advertise I don’t know, but I learned early on that many Evergreen students and faculty — despite the geoduck mascot — lacked much of a sense of irony, or humor.

When I became editor of the CPJ in 1974, I started wearing a three-piece suit as an open act of rebellion. I was immediately confronted by a faculty member who screamed at me outside the newspaper’s office: “What do you mean by wearing that tie!” he shrieked. We ran stories that teased the college’s culture. One Greener with humor was pre-Simpsons Matt Groening, who did movie reviews and drawings for the CPJ when he was a student. He did a classic CPJ illustration making fun of the school’s oddball course offerings as a cereal box called “Evergreen Flakes.” He did another called “The Whole Dearth Catalog.” Even an experimental college has to make fun of itself. Maybe especially an experimental college!

I was nearly impeached as CPJ editor for running an ad for Olympia beer, the hometown brewery, which read: “Your Playboy Arrived: No Centerfold. You Owe Yourself an Oly.” The campaign was full of lines like that, encouraging college students to drink when they got “bad” news. We ran the ad because they paid, but also I felt sure that virtually no one at Evergreen had a Playboy subscription. Accepting the ad seemed like a big joke on the corporate advertiser. But people took the sexism seriously and a vigorous debate was had. We also took ads from one of those places that sold academic term papers to college students. We justified this because no one at any Evergreen seminar on hat-knitting or talking dolphins was ever going to buy an academic term paper. Plus we needed the ad revenue.

What drove me nuts about political correctness was that it seemed aimed at shutting down difference, and creativity. And in the four years I was at Evergreen, where I expected to find a high level of ideological diversity and tolerance, I often found closed-mindedness. On the other hand, the college itself allowed students wide latitude to pursue their own lines of inquiry and ambition. So while PC campus culture largely talked to itself, the ability to do what you wanted academically was pretty much unhindered. The liberty of studying off campus via independent study contracts  or internships was extremely valuable.

Intentional communities — utopian communes and the like — don’t fare well in the long run. Not far from Evergreen across Puget Sound was the old anarchist colony of Home, one of many that sprouted in the Northwest in the late 19th and early 20th centuries. Most lasted only a few years; none became permanent, largely because it’s difficult to build ideological communities that don’t turn inward and devour their young at some point. This is true on the right as well as the left.

For all my frustrations at Evergreen, PC culture did not hold me back. The education I got from programs there broadened my sense of history and culture, opened my eyes to oppression and made me question my life, my trajectory, my values. All good stuff that education is supposed to do. I didn’t go to college to have my assumptions about life confirmed. I came to learn, and I did.

To Donald Trump I would say that political correctness was both a teacher and an obstacle, but it exposed me to a diversity of ideas. It’s not killing us, it’s stretching us, which is a very American thing. The experience at Evergreen was good for me, even if it meant an impeachment trial.