Unearthing the T-Rex of Hell Creek 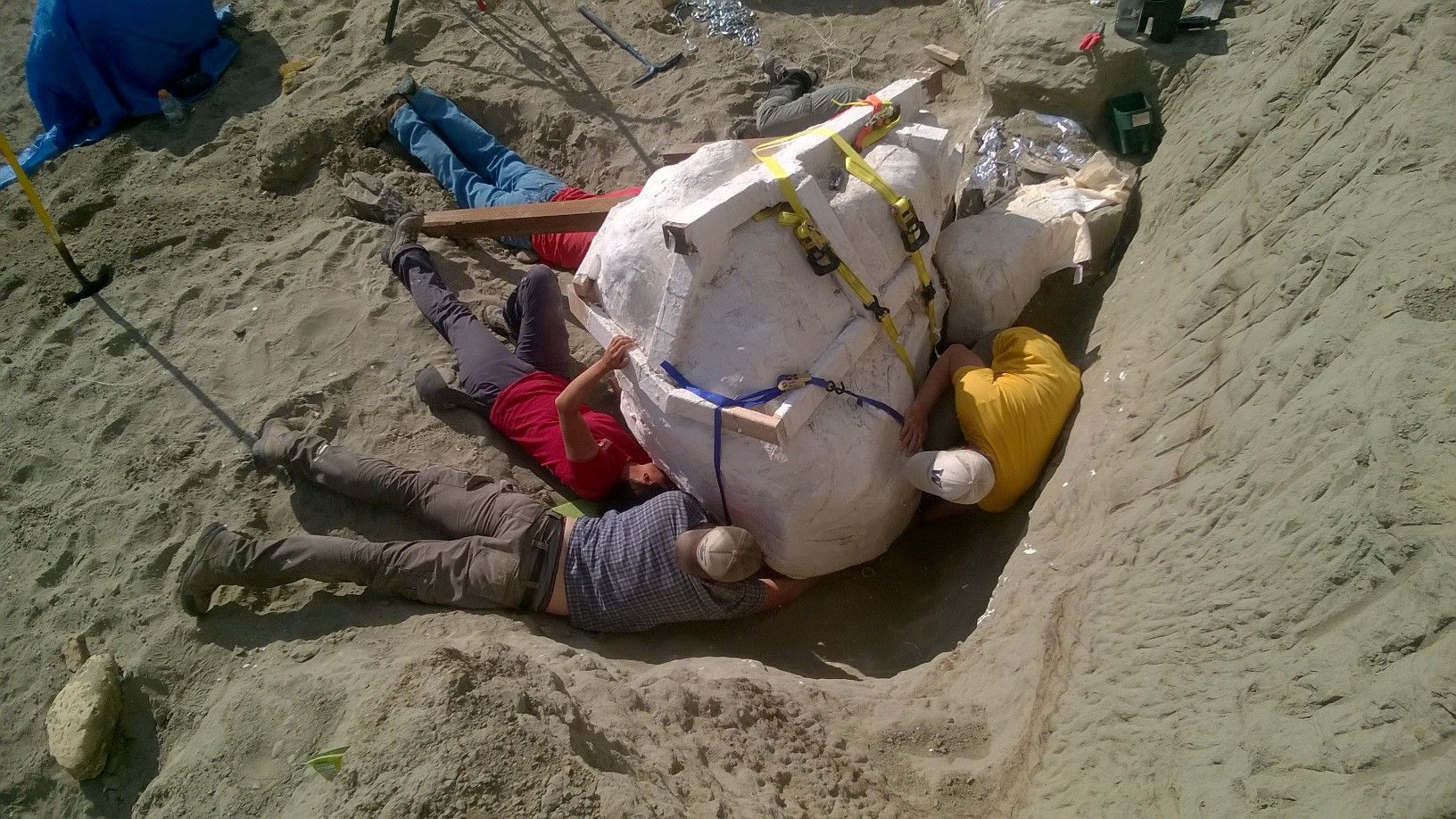 Paleontologists prepare to remove the T. rex skull from the Hell Creek dig site in Montana.

Luke Tufts and Jason Love have been digging up bones together for more than 15 years. Each spring they stuff boots, ski poles, rain coats, backpacks and other hiking gear into a station wagon and drive from Seattle to an fossil dig site in northeastern Montana known as the Hell Creek formation.

The trip takes anywhere between 18 and 24 hours so they have lots of time to talk, particularly about what treasures they might find. Of course, like anybody with the slightest fascination with the history of life on Earth — or if you’ve seen Jurassic Park — Tufts and Love can’t help but imagine what it would be like to discover the remains of the largest meat-eating dinosaur that ever lived: the Tyrannosaurus Rex.

Finding such a specimen would launch a mere hobby into the realm of history. The two self-proclaimed amateurs would be counted alongside a select group of people responsible for some of the most important discoveries in history. The specimen would be displayed in a museum, not in the basement or in some corner, but center stage for all to see.

That was the extent of their daydreaming. It’s doubtful that they would have believed you if you told them that, in two years, a T-Rex would be on display at the Burke Museum with their name on it.

As with most major discoveries, there’s was a story of perseverance and luck.

While some paleontologists come to dig sites armed with the equipment and manpower necessary to move large amounts of dirt, Tufts and Love use smaller tools that allow them to cover the surface of the earth, and nothing more. This creates a situation like that in Montana’s Hell Creek this summer, where Dr. Gregory P. Wilson — the adjunct curator for the Burke Museum and a biology professor at University of Washington — recently led a dig team of almost a hundred people.

As Wilson and his crew churned the earth, Tufts and Love worked on the surface. The latter method has its advantages, since they can cover more ground at a faster rate. This is what led them to the fossilized remains of a thescelosaur in May 2015. The specimen, a bipedal herbivore from the late Cretaceous period, was in good enough condition to be displayed in a museum. It was by far their most significant discovery.

Following their discovery, a triumphant feeling remained with the duo for the rest of the 2015 trip. But on the fifth and final day, just hours before they would pack into their car and head home, Tufts and Love came across some bones on the surface of a rocky hillside. And where the bones were broken and a cross section exposed, they could make out a honeycomb structure.

According to Wilson, this a telltale sign of a large, carnivorous animal. It wasn’t until a year later that his crew excavated the remains and uncovered the vertebrae, ribs, hips, lower jaw bones and skull of one of the most well preserved T-Rex fossils ever discovered. In terms of completeness, there are only 15 known T-Rex skulls as complete as this one, and only 25 relatively complete specimens — 5 percent of the entire skeleton — of this dinosaur in the world.

“I mean, those are moments that you have this, just, fantastic, euphoric feeling,” Wilson described the moment the T-Rex skull was uncovered. “We all celebrated that night.”

The theory is that the specimen’s death occurred roughly 66.3 million years ago just before the end of the Cretaceous period. Researchers calculated this figure by measuring the distance between the sediment layers that indicated the mass extinction event, and where the fossil was preserved in the hill just 20 feet below.

The northeastern plains of Montana are thought to have once been covered by a web of rivers, streams and deltas, feeding down from an early form of the Rocky Mountains and into a large body of water called the Western Interior Seaway. Tufts and Love, along with Wilson and his colleagues, think the specimen died and fell into a river, or vice versa, when it was 15 years old and roughly the size of a bus.

The specimen is currently in the basement of the Burke Museum wrapped in layers of foil, burlap and plaster for protection. The dirt and sediment covering the rest of the skull will be slowly and delicately removed over the next year or so. Once it’s ready, the specimen will go on display in the museum, just as the amateur paleontologists always dreamed.

It's been nicknamed the “Tufts-Love Rex.”