Will a Latino name cost this judge his position? 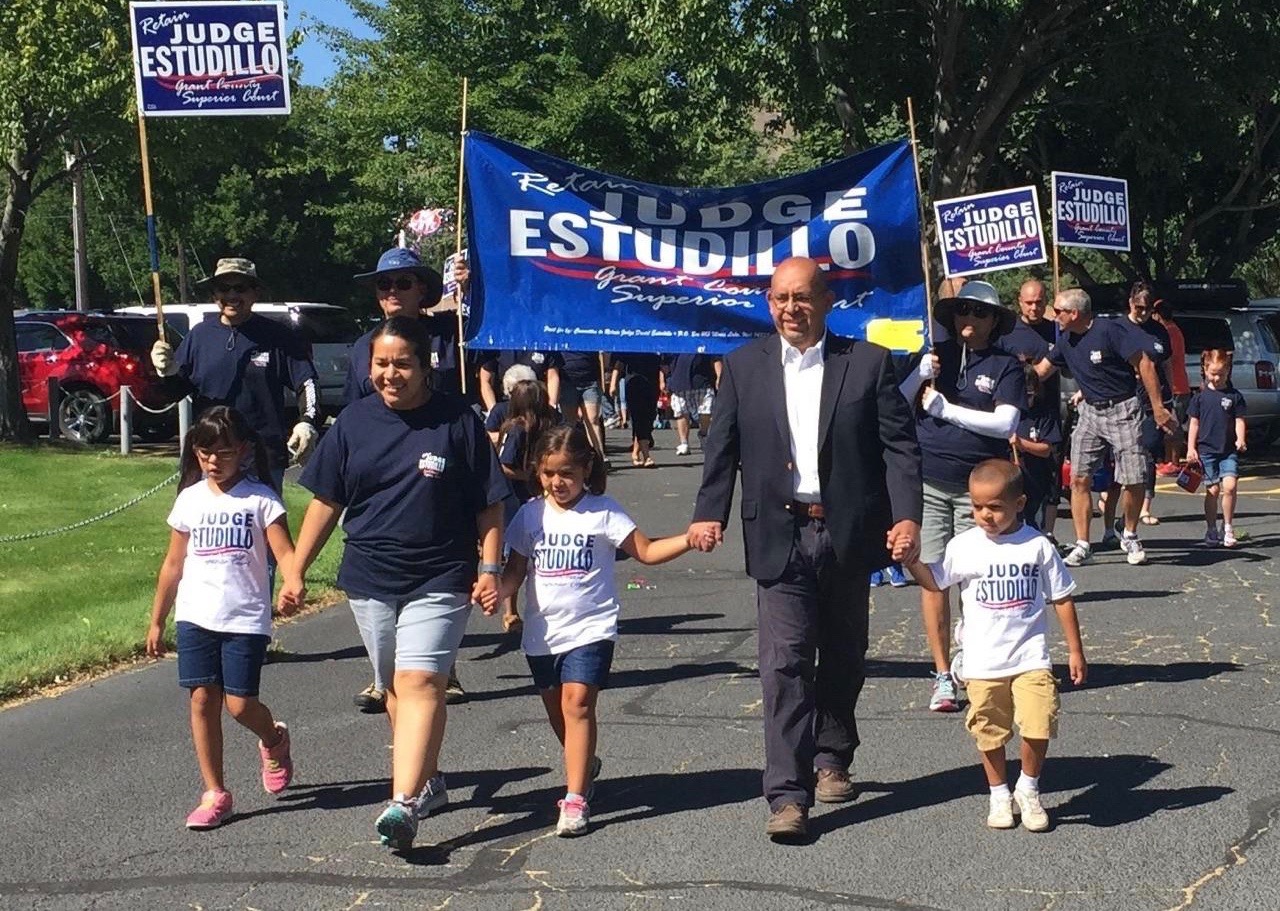 Judge Estudillo and his family

This November’s election is shaping up to be a blockbuster on the state and national level—with a close presidential race, and big contests for governor, other statewide offices, and the state Legislature. Who wins and who loses will tell us a lot about our priorities and even our mood as a statewide electorate. But one of the more obscure and local races may turn out to provide the most insight about Washington’s voters of them all.

In Grant County, which includes Moses Lake, David Estudillo is running for Superior Court judge. Estudillo was born and raised in Eastern Washington. His parents immigrated from Mexico in the 1960s, starting off as farmworkers, and later opening a small grocery store in Sunnyside, between Yakima and the Tri-Cities, that the family ran for decades.

He was appointed to the bench last year by Gov. Jay Inslee to fill a vacancy after the retirement of Evan Sperline, then the longest-serving Superior Court judge in the state. Estudillo is the only Latino state judge in Eastern Washington, and is now running, technically as an incumbent, for a full four-year term.

Estudillo’s opponent is Nick Wallace, another attorney who applied to the Governor’s office for the judicial vacancy that ultimately went to Estudillo.

But this race is important because it may tell us how far we have come, and how far we have yet to go, on issues of race and politics here in Washington state. Let me explain.

Sometimes numbers don’t lie. This is one of those times. In the 10 counties across Central Washington (Adams, Benton, Chelan, Douglas, Franklin, Grant, Okanogan, Walla Walla, Skagit, and Yakima), Latinos constitute over 33 pecent of the total population, yet hold less than 4 percent of the local elected offices. Combined, these 10 counties elect 69 port commissioners, 66 county officers, 51 judges and 30 county commissioners.

Only one is Latino: Estudillo. And again, he was appointed, not elected. In other words, although more than one out of every three persons in these counties is Latino, less than 2 pecent of their elected judges are Latino—1 out of 51, to be exact.

So what’s to blame?

In fact, in the 10 counties, 99 percent of all local elections are at-large.

We witnessed this phenomenon play out in stark terms in 2012, during two State Supreme Court races. One race featured a heavily favored incumbent, Susan Owens, against a little known challenger, Douglas McQuaid, both of whom had Anglo last names.

The second race featured another incumbent, Steve González — who, like Estudillo, had been appointed, but who had a Latino surname — against a little known challenger, Bruce Danielson.  But Danielson had one thing going for him: his last Anglo name.

On the face of it, this election didn't seem like one González should have to worry about very much. González was a decorated prosecutor, having successfully tried the Millennium Bomber terrorist, Ahmed Ressam, as an Assistant U.S. Attorney. He was also a well-known judge, having spent 10 years on the King County Superior Court. Based on this stellar resume, Gov. Chris Gregoire appointed González to fill a vacancy on the state Supreme Court. (Disclosure: I coordinated and managed González’s appointment campaign and worked on his election campaign.)

For his part, Danielson was a relatively unknown and unaccomplished lawyer. Danielson did not raise any money, and appeared not to campaign at all, failing to appear at events, interviews or candidate forums.

But González still took Danielson seriously, raising a record amount of money for a judicial primary race, securing endorsements from leaders in both parties, including both gubernatorial candidates (Rob McKenna and Jay Inslee) and both Attorney General candidates (Reagan Dunn and Bob Ferguson). Every newspaper and bar association endorsed Gonzalez.

But let’s not forget about our control group: the Susan Owens v. Douglas McQuaid race. That also featured an incumbent against a little-known challenger who barely raised money and barely campaigned. Like González, she had all the endorsements — but unlike González, she had an Anglo surname. Let’s see what happened in her race first. 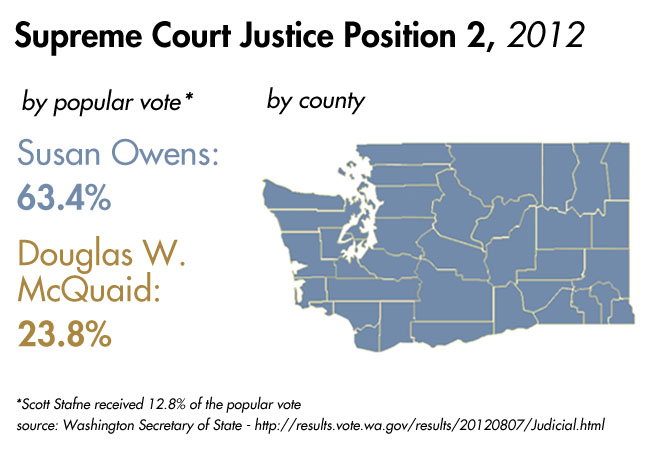 See a county-by-county breakdown of the above graphic

Justice Owens won every county in Washington, and 63 percent of the vote overall. Exactly what you’d expect from a well-funded incumbent running against a challenger with a low profile.

But in the González race, a very different story played out on election day. 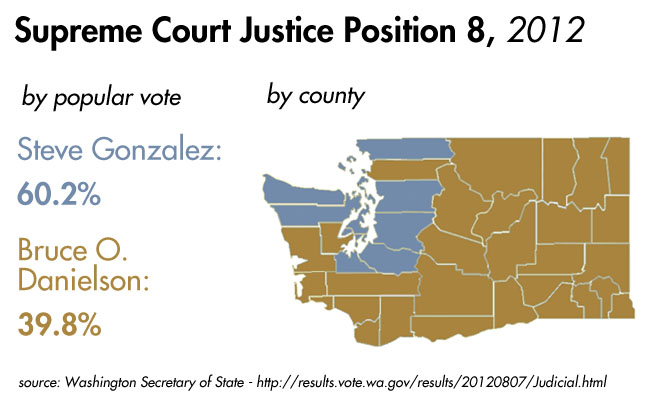 See a county breakdown of the above graphic

Justice González won the overall vote, but he lost 29 counties to a ghost candidate. And digging deeper into the numbers revealed a sharp split along race. Danielson probably collected 75 percent of the white voters in these counties, according to an analysis that a University of Washington professor and I did at the time.

To put that in perspective, Republican gubernatorial candidate Rob McKenna collected only 56 percent of the white vote in these counties, which means Danielson — who didn’t raise any money or even campaign — outpolled the best-funded GOP candidate on the ballot with white voters by 20 percentage points.

By contrast, González won nearly 67 percent of the Latino voters in these counties, which was 11 percentage points higher than Jay Inslee, the Democratic gubernatorial candidate.

In other words, there was a sharp and visible difference between Latino and white voters in these counties. And make no mistake, this was a bipartisan racially polarized voting: white Republicans and white Democrats were voting in droves for Danielson — seemingly because of his last name.

Had it not been for votes in Seattle, Tacoma, Everett and Olympia, González would have lost in a landslide to a candidate who never actually campaigned.

Because judicial races tend to be low information races, variables such as a candidate’s last name tend to be more pronounced. The two Supreme Court races in 2012 — González/Danielson and Owens/McQuaid — were a live, statewide experiment on how much a Latino surname can affect voters’ preferences at the ballot box, and doom a Latino candidate’s prospects in an election. If González had been running for Superior Court in Grant County, these numbers indicate that he likely would have lost even if his opponent never left his front porch.

Like González, David Estudillo is also running as an incumbent, appointed by the Governor, with a Latino surname. But unlike González, Estudillo doesn’t have the luxury of getting bailed out by the I-5 corridor. No local candidate does—and that may explain why Latino candidates have struggled to break through in Central Washington.

Each race is different, however. Unlike Gonzalez’s challenger in 2012, Nick Wallace is running hard against Estudillo, touting a campaign slogan “Experience Matters,” in a thinly-veiled suggestion that Estudillo is not qualified to serve on the bench. Wallace is also asking voters in Grant County whether they can “trust” Estudillo because he spent part of his career practicing “immigration law in Seattle.”

Based on this campaign rhetoric, one would think that Estudillo is an unqualified carpetbagger. But Estudillo was born and raised in Eastern Washington, spent nearly 20 years practicing commercial litigation and immigration law, and speaks fluent Spanish. Given that Grant County is 40 percent Latino—considerably higher than the 12 percent statewide figure— one would think this background makes Estudillo just the man for the job.

But so far, it looks like the establishment is coalescing around Wallace, who even secured the endorsement of former Judge Evan Sperline (whose retirement opened up the seat in the first place). Sperline wrote that “diverse viewpoints” are not that important on the Grant County Superior Court bench — a possible reference to Estudillo’s Latino background — and lamented that Inslee did not appoint Wallace, his handpicked successor.

The past isn’t necessarily prologue. Estudillo may win, and become the first Latino ever to win a judicial race east of the Cascades. Or Estudillo may lose, but the voters’ preferences may not fall as sharply along racial line as they did in 2012 (despite the campaign rhetoric).

Regardless of how it turns out, the Estudillo v. Wallace contest may tell us more about who we are as voters than any other race on the ballot. And for that reason alone, we should all pay attention.

David A. Perez is a constitutional law attorney in Seattle. He can be reached at perez.a.david@gmail.com or on Twitter @DavidAPerez1