From 12th Man to rookie: Meet the Seahawks' new squad 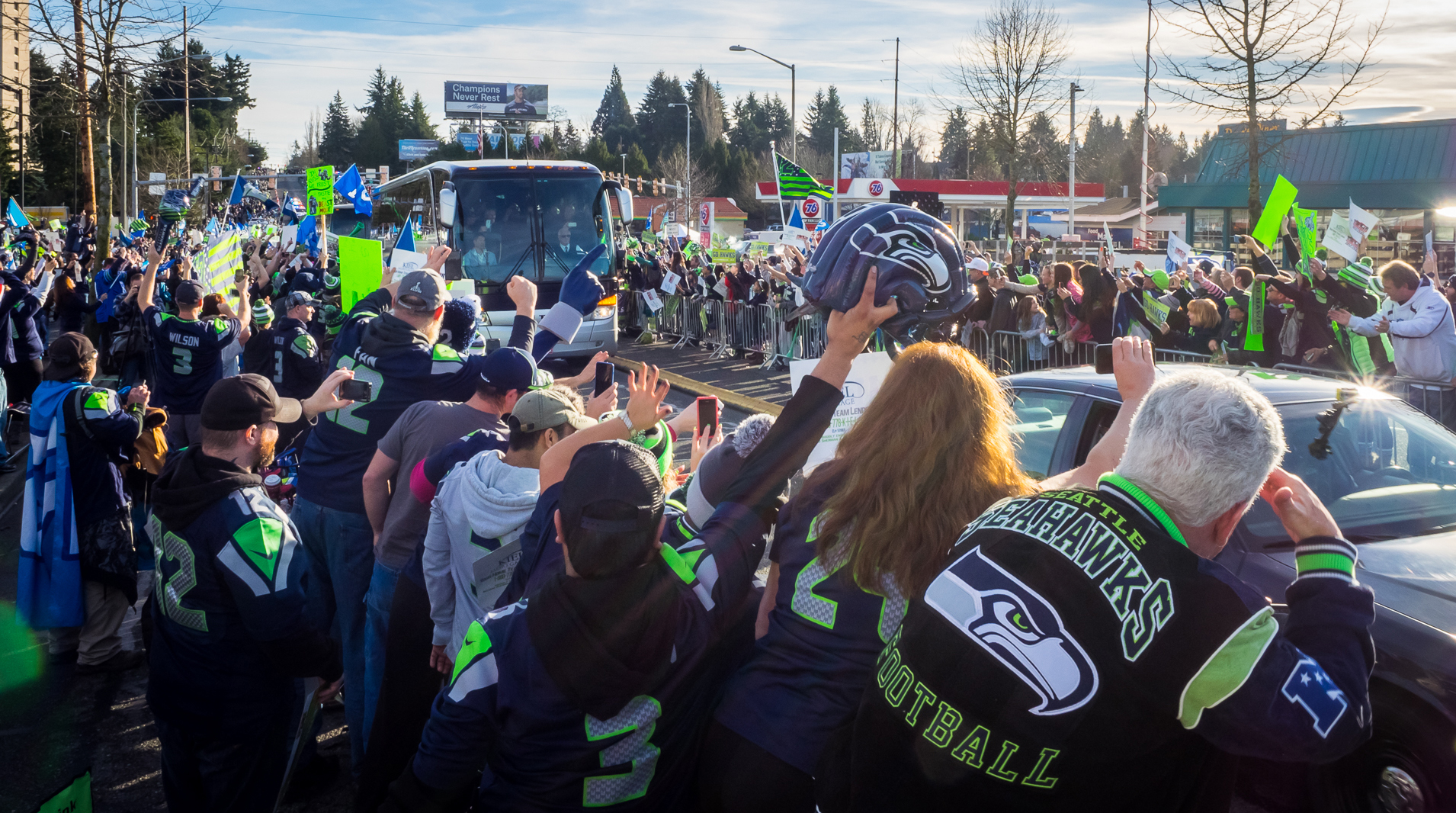 Taniela Tupou was a dazzled seventh grader in Everett when the Seahawks made their first Super Bowl in 2006. When they made the Super Bowl after the 2013 season, Tupou — then a University of Washington sophomore — drove down to Sea-Tac Airport to be among the thousands who lined the motorcade route -- he remembers waving a big "12" flag -- for the buses taking the team to its flight to New York.

When the Seahawks returned with the Lombardi Trophy to a massive parade downtown, Tupou was there celebrating at CenturyLink Field.

Now, he's pulling on the uniform. Mr. Outside is on the inside.

"I think about it lots of times," he says, grinning, at his locker at the team's headquarters after practice. "It's a lot to take in sometimes. I have to remind myself it's just football."

He says that to calm down his 6-1, 284-pound self. But it isn't just football. It's Seahawks football. It has a special weirdness that Tupou has found himself explaining to the rest of his newbie class from around the country.

If a black belt were awarded for audacity, the Seahawks would start out at seventh degree, and work up. They propose to win a Super Bowl this year with 15 rookies on the 53-man roster. That's the most they've had on the roster since the 1976 expansion team. It's a little like going to a saloon fight with Cub Scouts.

And among these scrappy upstarts is Tapou, who has become a locker-room interpreter for all things Seattle to his fellow rookies. But for that job, he had to work up a phony coolness.

A graduate of Archbishop Murphy High School in Everett, and a four-year defensive lineman for the Huskies, Tupou's late adolescence and early adulthood came during Pete Carroll's tenure as Seahawks coach, when success has become an expectation. He's been around to see how the success has tweaked the local culture. Tupou, as with a few other Huskies who've made a Seahawks roster in recent years, has been grabbed by the phenomenon.

"Being on the other side, I've seen that first-hand how the city and whole state, even the Northwest, binds together," he said. "I think about that sometimes, how everyone can connect on one thing…I tell these guys that when the Seahawks win on a rainy Sunday in mid-October, the whole week becomes mid-August again. After you win, and you're stuck in I-5 traffic, people let you in. When the Seahawks lose, people don't let you in."

Psychologists have spent careers explaining the tribalism that works around modern sports. But that’s not Tupou's concern. He's consumed with mastering the position of fullback, one that he barely played in college. That's another part of the Seahawks weirdness: What a player has done before usually has little bearing what is being done in the moment. The switching of positions happens more frequently here than at any NFL outpost.

Which is why Tupou and other undrafted free agents figuratively gather outside the Seahawks gates, hoping to sneak in. Word is out that the Seahawks give mutts the fairest shot.

After a good workout in March for pro scouts, Tupou was one of 30 undrafted players signed to a rookie camp in May. He was mostly on the defensive line until a need developed at fullback. During training camp, an injured hand set him back. On roster cut down day Saturday, he was lopped, then asked back the next day because Carroll wanted a fullback.

Tupou's job remains tenuous. The veteran fullback he replaced, 32-year-old Will Tukuafu, was also cut — but may be invited back. After week one, NFL rules stipulate that veterans' contracts are no longer guaranteed, so Tukuafu's experience at a cheaper price may prevail.

Regarding the large rookie class, money drives that too. The Seahawks are playing big coin to about 10 top veteran performers, including QB Russell Wilson, who gets $18 million this year, $11 million more than last year. Under the NFL's salary cap, such a top-heavy group has to be balanced by a smaller middle class, supplemented by the cheapest available labor -- rookies, especially undrafted free agents.

The Seahawks roster last season had at one point an NFL-high 26 players who began their careers undrafted, including Doug Baldwin, Michael Bennett, Thomas Rawls and Jermaine Kearse. This week they have 24, four more than the No. 2 team, the Indianapolis Colts.

Carroll and his staff have always been consistent on their willingness to favor youth, all else being equal.

“Kind of like a freshman class, isn’t it?" Carroll said this week. "I think it’s a good statement about what we are doing. We believe in young guys. We believe the young guys can play and we have committed to that a long time ago. It’s worked out fine for us. I’m happy about it. Not worried about it at all.’’

Only two rookies are booked to start, if healthy: Right guard Germain and defensive tackle Jarran Reed, the top two picks in the April draft. So the Clink won't quite be a preschool playground Sunday.

Should Tukuafu be hired back next week, Tupou at least has Sunday to prove he belongs somewhere in the NFL and not in the stands.

"Very excited, very cool, very happy to be here," he said. And if the Seahawks win, he gets through Monday traffic a little easier.