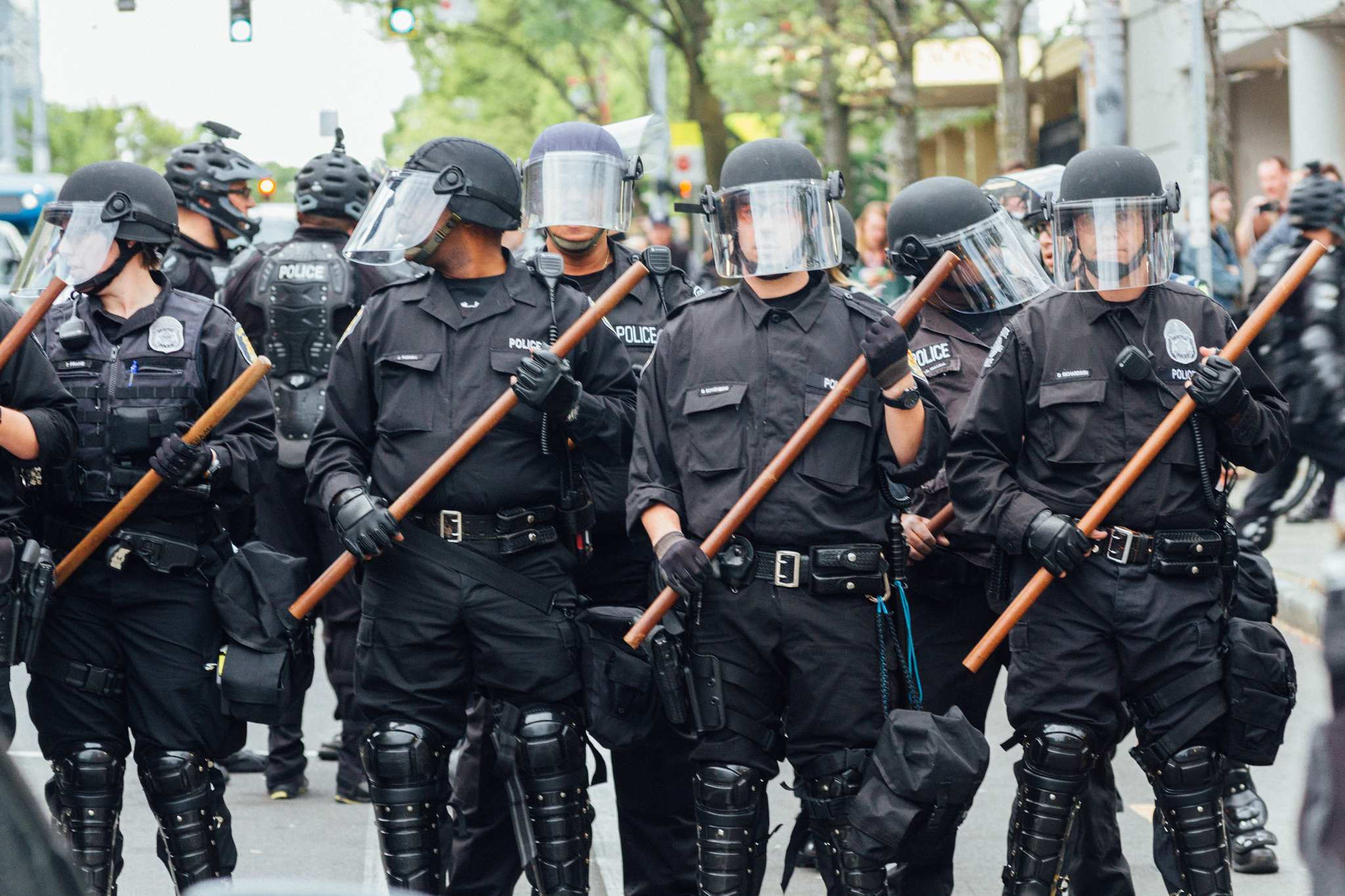 Seattle police on May 1, 2015, when large community demonstrations were followed by scattered violence.

As citizens of Charlotte took to the streets and NFL football players took to their knees, a different, quieter battle of police reform has been taking place in Seattle. Late Thursday evening, in a windowless conference room on the third floor of City Hall, in what felt like a different universe than the protests unfolding across the county, the civilian Community Police Commission tackled the issues of bias and officers' use of force in a quiet but intense way.

The group approved long-awaited recommendations for accountability in the Seattle Police Department with five “yes” votes and two abstentions.

For more than a month now, members of the commission have been meeting behind closed doors with representatives from the mayor's office in an attempt to present a legislative proposal for police accountability to the court overseeing federal reforms of the Seattle Police Department.

Thursday’s ordinance reflects the extent of the CPC’s willingness to compromise. In approving their proposal, the commission hoped to offer something as close to its original draft as possible while also showing some sense of unity and cooperation with Seattle’s elected officials.

While the proposal is not the same as what the city administration will submit to a federal judge on October 7, the two plans should look similar if the solidarity everyone says they value is at all achieved.

Now, after literally years of trying to move a suite of accountability recommendations — spotted with tension, compromise, more tension, process, more process and the occasional threat — the CPC approval of its package is the first step toward actually codifying reform in Seattle law.

The Justice Department found in 2012 that Seattle cops used excessive force and displayed patterns of racial bias. The DOJ sued the city, which led to a consent decree to reform the police department.

Federally driven reform is unlike any normal legislative process. While the goal is no less significant, the meeting of politics, the courts and the community creates an often opaque process that can be especially confusing and hidden from the public. This is due in large part because the language of the agreement between the city and the Justice Department reigns supreme. Any proposal seen to change that language must get the blessing of U.S. District Court Judge James Robart. As such, the city has agreed to submit early drafts of legislation to the judge before it goes to the council for discussion.

The CPC released an earlier draft of an ordinance in early August, which eventually became the baseline for the recent talks with the mayor's office. Unlike IN earlier collaborations with city stakeholders, the CPC put that proposal out wholly on its own and represented a strong statement of the commission's principles with little mind paid to how if conflicted with the city's often process of collective bargaining with police unions.

That draft reaffirmed the need for an Inspector General’s Office to oversee broad operations of the department. It diminished the power of the mayor to appoint all of the civilian oversight positions, granting more of that to the CPC and the council. It also called for greater civilian presence in the Office of Professional Accountability, which investigates misconduct claims in the department, and granted that office subpoena power.

Also notable: Their proposals would eliminate the Discipline Review Board, set up as an appeals body for disciplined officers, but filled with fellow employees. The commission, moreover, called for creating a standardized matrix for consistent disciplining of officers, granting the civilian oversight body budget independence from the mayor and the Police Department, and requiring the department hold onto officer files in case someone complains about their conduct years later.

Arguably the sexiest proposals were making collective bargaining negotiations open to the public and opening use of force investigations to an external body.

Thursday's revisions were a confusing mix of items the CPC had compromised with the mayor's office and therefore permanently conceded, and items struck from the proposal with the intention of pursuing on their own through other avenues.

For example, open collective bargaining, outside investigation of uses of force and the discipline matrix were all removed.

On the outside, it looks like the CPC has given up on these. But in reality, they’ve calculated that these proposals, which were almost certainly points of contention in the negotiations, can be pursued and accomplished later without the hand of the court.

Meanwhile, a proposal to allow the Inspector General legal representation independent from the City Attorney has been permanently struck, part of a compromise with the mayor's office.

Considering that they had already released the proposals they’d like last month, why collaborate with the mayor’s office? The judge will only weigh in on what he believes to effect the consent decree, not on the substance. That means that, theoretically, the CPC and the city could submit opposing recommendations from a policy standpoint but that both might get the judge’s approval. That would leave it open to the council to freely decide which recommendations they want.

The CPC is largely filled with advocacy-minded citizens, so they could submit their recommendations as hard-left as they can and stand a good chance with a council buoyed by more liberal councilmembers. After all, the CPC will have to answer to the community organizations who depend on them to be their voice in the process. By compromising, they risk the scorn of the people they’re built to represent.

One answer is simple: The CPC agreed to collaborate early on and, despite immense frustration on their part, haven’t given that up.

From a more practical standpoint, however, going it alone represents an enormous risk. If the commissioners were to submit recommendations parallel to the city’s, the court might simply strike some of their most treasured proposals and leave intact the ones they oppose.

It's for exactly this reason that the proposals most likely to need court approval have been compromised, while those that may be outside of the consent decree have been tabled for later consideration.

Occasionally, this process belches up delightfully gray situations, miles from some of the more black and white presentations of issues with modern policing.

Struck from the CPC's proposal was the requirement that the commission include one member of the Seattle Police Officers Guild and one member of the Seattle Police Management Association. As members of the activist community (there are CPC members from the ACLU, Mother's for Police Accountability, the Public Defender's Association, the John T. Williams Memorial Totem Pole Project), you'd think they would celebrate the proposal.

In fact, it became clear in the meeting that this idea came from the mayor's office and the commissioners remained fiercely committed to having officers at their table. "I personally feel it’s extremely important to have Seattle union representation at this table," said commissioner Isaac Ruiz. "It will weaken CPC position without union representation."

For a moment, commissioners considered putting this language back in, before pulling back for fears of repercussion in the court. They would, instead, pursue this proposal through other avenues where, as co-chair Lisa Daugaard said, they could "build support in the public."

The Community Police Commission's new plan goes further than a deal they'd reached with the mayor's office in 2015. When the mayor files his ordinance, the measure of how well the recent talks went will be, on the spectrum between what was agreed upon in 2015 and what the CPC voted on Thursday, how close it is to the latter.

The heartfelt statements about police accountability from Seahawks Doug Baldwin and Richard Sherman, the #Blockthebunker crowds taking over city hall — these are reminders of the momentum built around this issue. As the boils over into football, into media, into places that cannot be ignored, Seattle's method of making substantive policy can feel a little backroom. With this first step, however, it too may go before the public eye.