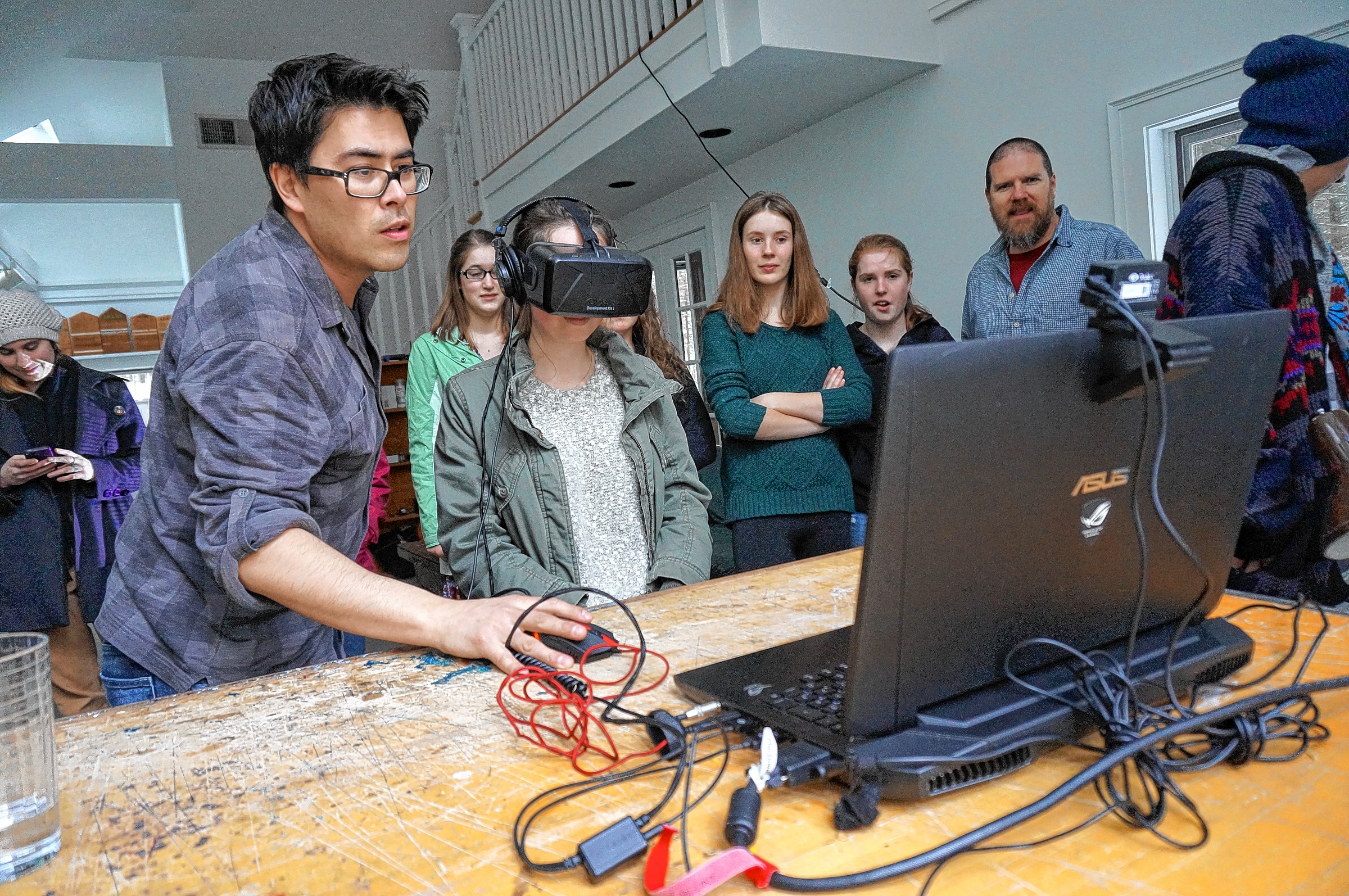 Brent Watanabe will be presenting at Crosscut's third Arts Salon, discussing the intersection of art and tech, on Tues., September 20.

If you happened to wander away from the throngs of people taking in Death Cab for Cutie and Billy Idol at this year’s Bumbershoot festival, you might have found yourself in Seattle Center’s Exhibition Hall. There, you would have encountered the odd scene of robotic animals, projections of fairytale birds, and garbage — so much garbage — silhouetted against the backdrop of an amusement park, the day after the festivities.

The 1,200-square-foot installation, the product of a new 4Culture Tech-Specific arts grant, exudes a kind of playfulness, but also a heavier feeling of time wrinkled or run amok — “like a snapshot where all the things continue to live,” in the words of its creator, artist Brent Watanabe.

A Seattle native, Watanabe, 45, has been creating videos and installations at the intersection of art and technology since the late 1990s. His work has ranged from concert posters to a recent project that placed an invincible deer in the middle of a video-game gangland.

Watanabe's first paid art gig was making band posters in 1991. He produced hundreds of them. “I started doing crying animals on them,” says Watanabe. He quickly learned that “if it’s animals, not people, people are likely to look longer — to get sucked in.” Animals, anthropomorphized or in human environments, have been a theme ever since.

Watanabe earned a B.A. in painting from UW in 1995, but he found himself limited by his skills and what he could achieve. It was a SAM screening of a short David Lynch film, shot using an antique Lumiere camera, that showed him the possibilities of video. “There was this idea that I could create something constantly variable, a slice of time, a vignette.”

He started playing with video and animation with whatever equipment he could get his hands on, eventually getting a job through a friend as animator at Microsoft. “I didn’t animate Clippy the paperclip,” Watanabe says, although the work wasn’t much more thrilling. But he taught himself to program, and had a chance to work with experts in the field. “It was like having a professor right down the hall,” he says.

Watanabe remains a self-described jack-of-all-trades; he can do the animation and programming and robotics for his shows, but by his standards, without the finesse of a specialist. “If creating 'Grand Theft Auto' is college level," he says, referring to the shoot-'em-up video game, "what I do is first grade.”

That may be, but what he's lacked in specialized training, he easily makes up for with clarity of vision and determination — allowing him to, among other things, learn to program within the world of "Grand Theft Auto." The fifth iteration of the game, released in 2013, is one example of video games in recent years that aren’t just goal-based. It’s about exploring a world — and, if you know how to code, you can go one step further and modify (or mod) aspects of it.

Last March, thousands of people in the gaming world, art community, and elsewhere spent hours tuned in to Watanabe’s "San Andreas Deer Cam," watching a buck wander the sometimes chaotic, often lonely 100 square miles of San Andreas as portrayed in "Grand Theft Auto V." The deer was autonomous and eternal, interacting with its surroundings with endless possibilities, indefinitely. It ran 24/7 from March 20 to April 20, and has returned sporadically since.

For viewers, it was mesmerizing, like watching a kind of twisted animal live-cam. In fact, though not an animal cam watcher himself, Watanabe is enthralled with the trend, which includes zoos’ panda cams, the epic Norwegian train ride documented in the seven-and-a-half-hour film "Bergensbanen," and the recent fascination with the live webcam set up an intersection in Jackson, Wyoming (population 9,577). Watanabe likens the obsession to gambling: “you never know what’s going to happen next.”

Describing the deer project, he says, “it was like gaining access to a movie studio,” but after hours, without the script. The project was written up in Wired and New York magazine, getting attention Watanabe could have never anticipated. To date, it has garnered 700,000 views on the video streaming site Twitch.

You can watch a short clip of it below. Watanabe will screen a special version of the deer cam at the Crosscut Arts Salon Sept. 20.

“I keep creating because there are things I haven’t seen before that I want to see,” says Watanabe, who works as a freelance creative developer/web developer. On and off since 2011, he’s done an artist’s residence at MacDowell Colony in New Hampshire, using this time in frigid January and February to focus on new projects. It was here in early 2016 that he conceived of and did much of the work for his Bumbershoot installation.

Watanabe knew he wanted the installation to reference the festival itself — the feverish excitement, the feeling of ephemeralness, but also the aftermath, including the massive amount of waste generated. “I remember a shot of Coachella,” he says, “where afterward there was a tidal wave of plastic bottles.” He marvels at the mental image of abandoned trash with a smile, without judgment. This cycle of reproduction, ingestion, excretion is a theme that Watanabe has been exploring for over 20 years.

Recently, he’s been experimenting with virtual reality. For him, technology is a tool to achieve an idea. If a project is focused on the tech, not the art, he says it can become problematic. Though not a musician, he likens it to listening to "Pet Sounds" or Pink Floyd: Though the technology was less advanced than what we have now, both have staying power.

For the last few years, Watanabe has been collaborating with local painter Cable Griffith, who creates paintings, little fantastical worlds, and Watanabe constructs digital games to live in them. He’ll be showing this installation, along with the "San Andreas Deer Cam" at the Neon Digital Arts Festival in Scotland this November.

The Griffith collaboration, titled "Dispose ()" is a “Sisyphian survival game . . .in which you simply live, wandering and consuming and disposing.” Viewers can walk up and play for a while, creating 0s and 1s that eventually litter the landscape, and then walk away again, while the game sits, breathing, waiting for someone else to come along.

Brent Watanabe will be speaking at the third Crosscut Arts Salon on September 20 at Galvanize Seattle. There will also be presentations by Ginny Ruffner, Tivon Rice, Aaron Lichtner and a Q&A with Iskra Johnson, all discussing the intersection of art and tech. Tickets will be available at the door for $5 or you can register here. 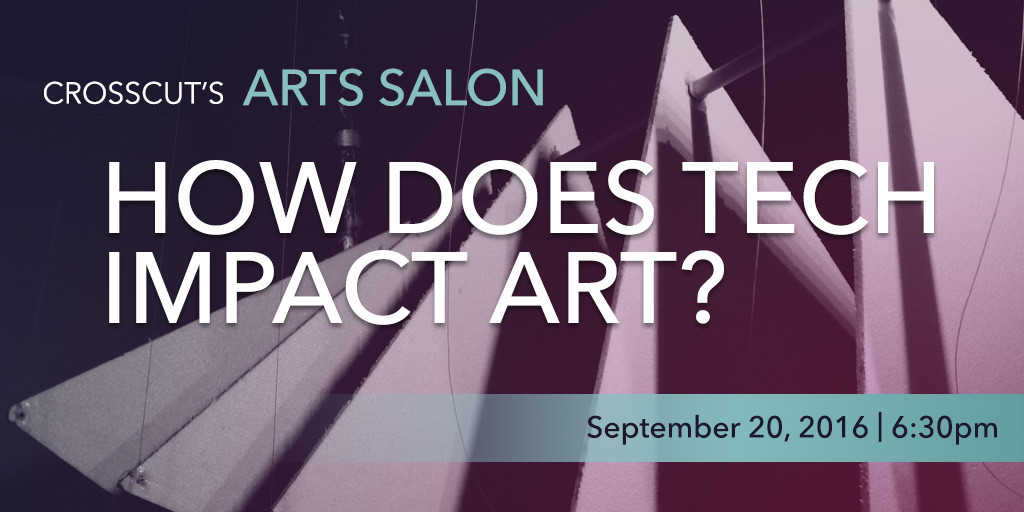