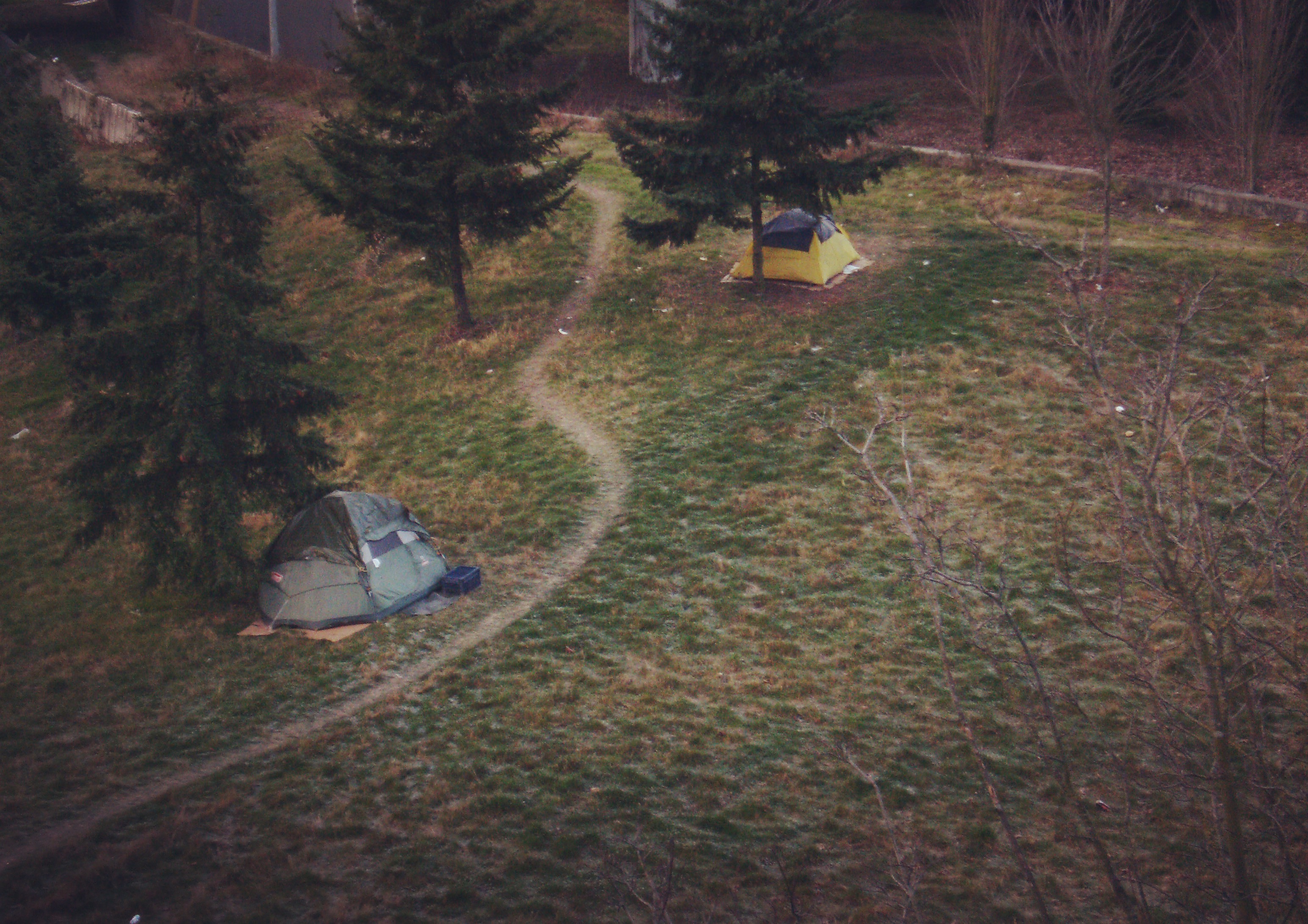 Tents pitched beneath the Jose Rizal Bridge in Seattle.

The homelessness debate in City Hall has recently become a war of words. What is a suitable or unsuitable location to camp? What is safe and what is unsafe? What is a “low-barrier shelter”?

The Seattle City Council Thursday considered these questions and more as they worked through the details of a legislative proposal from the ACLU, Columbia Legal Services and other homeless advocates. At issue is who can be removed from an encampment, where, when and to what alternative.

The proposal is, in many ways, the culmination of years of debate over the city’s practice of removing people camped on public land. It’s an issue that has taken a turn for the impassioned over the last year, as the city’s homeless population has grown and as these cleanups — or “sweeps” — have been moved under a microscope by press, advocates, city councilmembers and the homeless most effected.

The authors of the proposal readily admit that it’s not perfect, but pushed it forward last month after losing faith in Mayor Ed Murray’s approach. The mayor’s office does not approve of the proposal. But the advocates are armed with at least the cautious support of many Seattle City Councilmembers, which could set up a short-circuiting of the mayor’s plans. Whether the proposal will eventually get enough support to make it veto-proof remains to be seen.

The proposal would categorize encampment locations into several categories: suitable (or not), safe (or not) and hazardous (or not). If a location is considered either unsafe, unsuitable or hazardous, the city would be allowed to act quickly to clear it out. Workers would need to provide 48-hours notice before clearing it out, as well as an alternative site for the campers to go. Any belongings gathered would need to follow strict categorization protocols.

But if the site is none of those things, the city would need to provide 30 days of outreach to its residents, and an offer of housing in order to ask people to leave. If the city didn’t follow these guidelines, they’d have to pay a $250 fine to the campers.

The unfolding of this proposal has felt particularly political, with warring op-eds, damning assessments of what it will do and exasperated claims of hyperbole from both sides. A lot of this, it seems, stems from the vagueness of the ordinance. While examples of unsuitable, unsafe or hazardous locations are provided (landslide prone, school grounds, garbage build up), the authors intentionally did not define the parameters.

For advocates of the proposal, the idea was to let the legislative process work those details out. And according to several of its authors, exactly what falls underneath those umbrellas is secondary to establishing clear protocols and boundaries the city must follow. The most salient complaint against the city has been that the homeless are not the beneficiaries of clear and consistent cleanup protocols, and the criteria by which the city decides which encampments are unsafe are not especially obvious. While the ACLU and others may have their idea of what’s suitable, in this instance, they’ve prioritized the framework over the specifics.

The right framework should, theoretically, push people into safe places until the city can provide enough housing.

For the proposal’s opponents, however, the vagueness is a breeding ground for worst-case scenarios. Councilmember Tim Burgess so far is the only unequivocal “no” vote.

“If we follow this approach…we are essentially voting to allow permanent camping in the city on public property that the city defines as suitable,” he said. This is “something other cities have tried and experimented with…and are running away from as fast as possible,” he added, referring specifically to Portland.

Burgess’ fears were reflected in the public comment period that followed the meeting.

“We will have camps on the 50-yard line of every high school football field,” said Neale Frothingham, standing with representatives of the Neighborhood Safety Alliance.

“If you have 3,000 homeless people as you say,” said Jennifer Asplund, also an outspoken member of the Neighborhood Safety Alliance, “then with $50 million, you could have given each person $17,000 and they could have done a better job than the City of Seattle.”

Proponents of the ordinance came equipped with a long list of rebuttals to those arguments, and expressed willingness to be flexible. In an exchange after the meeting, Director of the Public Defenders Association Lisa Daugaard came up to Frothingham. “We’ll work this out,” she told him. “There won’t be camps on the 50-yard line. There won’t be camps in the end zone either.”

"If we don’t have suitable housing …we’re not going to be able to force them indoors," said Councilmember Mike O'Brien. "Then we’re back in the situation where we’re chasing people around town."

Although this discussion comes on the heals of Mayor Ed Murray’s Pathways Home report, a proposal for overhauling Seattle’s approach to homeless systems, those recommendations will take a year or more to actually create significant change. Councilmember Sally Bagshaw, the chair of the committee, said clarifying encampment protocols would address the “gap” between now and whenever the city can create more long-term solution for homelessness.

The one agreement in the room was that encampments are not a permanent solution. For this reason, authors of the ordinance said they would support a sunset agreement — if and when there’s enough shelter, the ordinance would disappear.

The council didn’t get far on solidifying examples of what is suitable or not. And after the meeting, questions of jurisdiction remained a major question mark. For example, how would Seattle police behave on state or Port of Seattle property? Council President Bruce Harrell wondered why Seattle was not being more proactive on cleaning up garbage.

Meanwhile, the mayor's task force on unsanctioned homeless encampments continues to meet. Whether that effort will coordinate or conflict with the proposed ordinance will not only determine the city's approach moving forward, but reflect an interesting political dynamic between the mayor's office and the rest of City Hall.

Underlying all of this is a desperation not usually present in city legislation: that winter is coming and people are still living outside. As budget season approaches, the council and the mayor are motivated to get something done and fast.