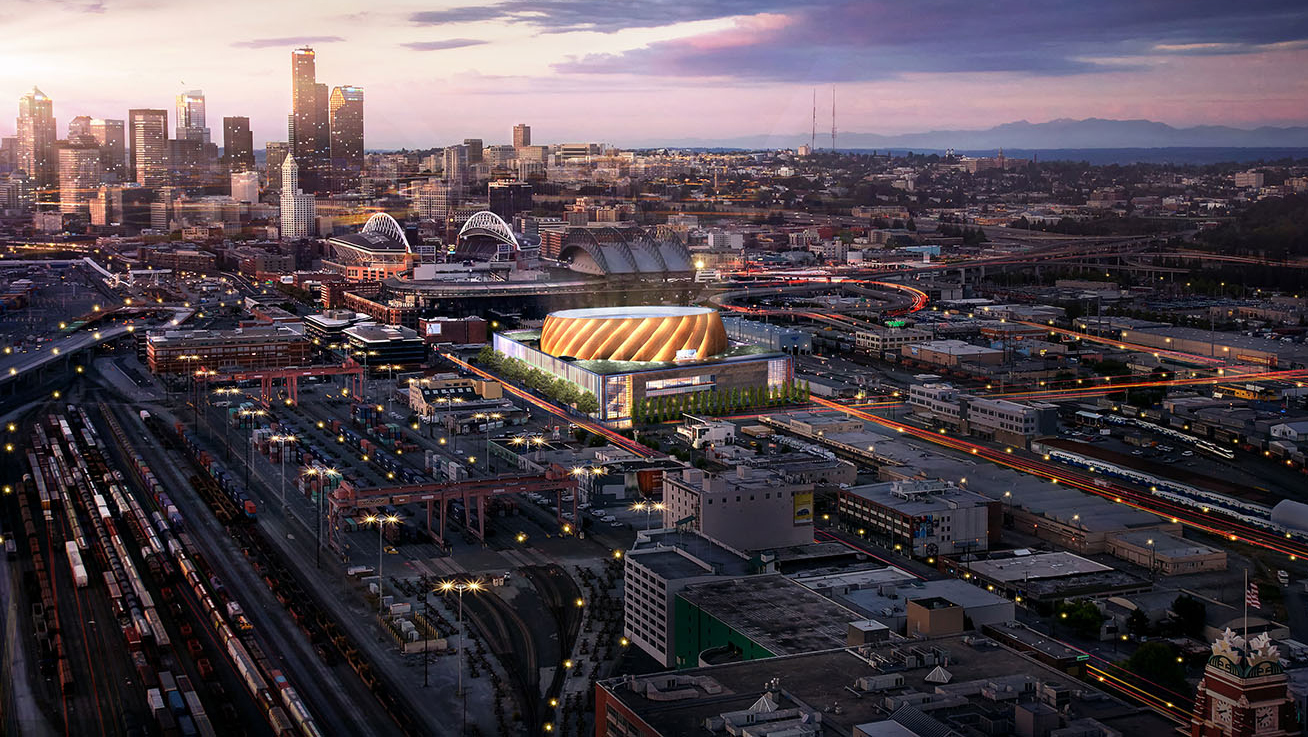 Chris Hansen's five-year pursuit of an arena in the Sodo District — meant to spur the return of the NBA, or the welcome of the NHL — was presumed dead last May, after a 5-4 vote by the Seattle City Council rejected a proposal to vacate part of a street to accommodate the arena.

But as the Billy Crystal character, Miracle Max, observed in the film Princess Bride, "There's a big difference between mostly dead and all dead."

If it revives, however, the project will be significantly different than the one Hansen and the city imagined in 2012, perhaps with no public money and no NBA team.

The corpse seemed to pop to life last week with news that Hansen purchased the remaining five acres for the project for $32 million — about three times its assessed worth.  The Seattle Times ran with a "full steam ahead" headline on the story, based on a quote from Bill Vipond, a longtime Seattle real estate consultant hired by Hansen.

“I’ve never gotten any direction (from Hansen) other than full steam ahead, we’re bringing the Sonics back," he said. "The general directive is, ‘Let’s go, let’s get the Sonics back, let’s keep working on getting the team.’”

But as it turned out, the purchase has long been part of the plan. Hansen included the land in his original presentation to the council years ago. He's held an option on the property for more than three years, and merely wrote the check now ahead of the option's expiration next year.

But the news story startled the council sufficiently that Hansen passed the word that nothing had changed.

Council member Tim Burgess, who chairs the affordable housing, neighborhoods and finance committee, said in a phone interview that neither he nor the central staff have been contacted about an alternative proposal for the arena by Hansen's people. Which doesn't mean that a quiet, what-would-you-do-if conversation hasn't taken place.

Burgess, who voted to approve the street vacation, also re-addressed a point he made months ago, that has been lost after the council vote and the in-your-face lobbying effort by the arena's chief opponent, the Port of Seattle.

"If (Hansen) were to submit a proposal that substantially reduces or eliminates the public share, I think that would be worth considering," Burgess said.

Burgess was referring to the part of Hansen's proposal that sought up to $200 million for arena construction, using the city's capacity to borrow money at much cheaper interest rates than a private developer. Hansen asked for no new taxes nor a diversion of current taxes, but a loan to be paid back out of 30 years of arena operations.

The touch on the public exchequer was light compared to Seattle’s previous sports-venue deals, but opponents of any public subsidy marshaled forces in preparation for a yes vote by the council. Had the street vacation been approved, the already busy city discourse would be filled with briefs, motions, injunctions and public charges and counter-charges, producing a dreary litigiousness over the arena proposal that likely would have consumed years.

The public finance request likely was a bigger deal to the council than the port's lament over potential traffic congestion from the arena.

At every arena hearing, the port offered up numerous employees who claimed imminent job loss because of the arena's traffic, a claim never proven. Yet by playing the little-guy victim card, the port made it easier for five council members to appease Seattle's progressive political constituency. The no vote averted the expense of the city having to defend itself.

"All due respect to the port for the work they do, I don't think they made their case about (the arena location's potential impact)," Burgess said. "That is how I voted."

During our interview, Burgess also offered a thought about the much-discussed memorandum of understanding between Hansen and the city, which commits to an NBA-first plan: Abandon it.

If indeed Hansen is pursuing wholly private funding, and the NBA still evinces no interest in expanding or relocating to Seattle, why not create a new plan that pursues hockey? This would make irrelevant the expiration of the MOU in November 2017.

"I was asked about the hockey-first idea some time ago," Burgess said. "I said that they could make a proposal independent of the MOU for a privately funded project. That would require from the city only the street vacation."

A new, private proposal frees Hansen from the threat of litigation over public funding, and makes the ask of the council easier. In July came news that $40 million in federal funds were made available for the development of the $140 million Lander Street Bridge, the 20-year choke point for port traffic south of the stadium.

The project now has commitments of $100 million. If Hansen and other Sodo stakeholders, including the port, can help close the money gap, the port's complaints about the arena’s potential location may be eased.

Since Hansen started buying Sodo land in 2011, much has changed in the Seattle marketplace, as well as with the port's business. Hey, even the Mariners, another strident arena-location opponent, have a new owner: John Stanton, a former minority owner of the Sonics who voted against the 2008 sale of the club to owners from Oklahoma City that started this mess.

That 2012 Sonics-focused MOU is as outdated as a flip phone. And a city council and a mayor who have their hands full with the nearly intractable issue of homelessness don't need to spend time talking arenas.

If Hansen believes the increasingly affluent Seattle market can sustain a privately funded arena, he may become the real-life Miracle Max.