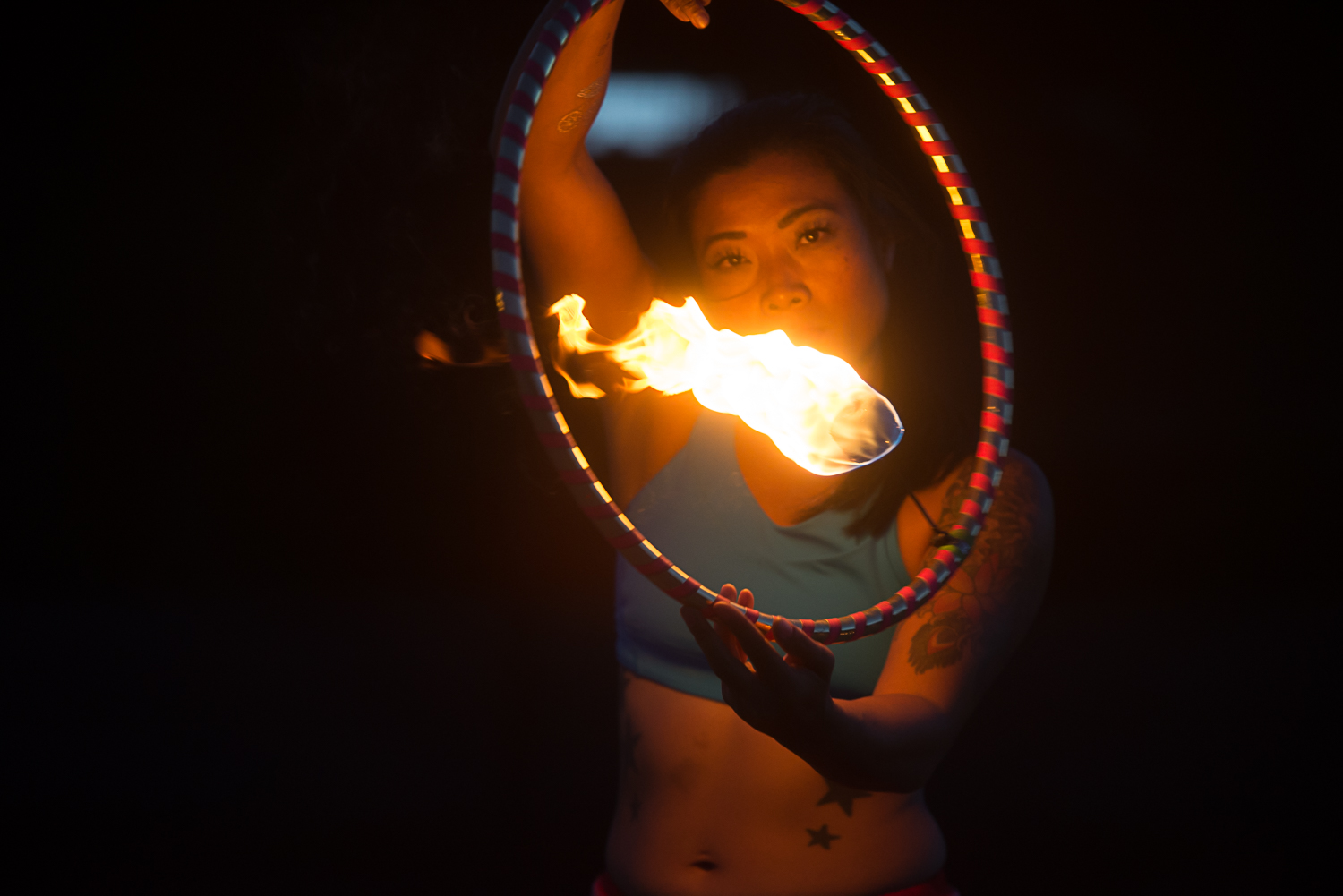 A fire dancer in Gasworks Park.

Real estate agents, circus performers, teachers, and software engineers — while the groups might not have much in common in their day-to-day lives, every other Wednesday they gather at Gasworks Park for a pyrotechnic celebration of light, music and dance.

Fire dancing has been around for decades, but its popularity has climbed rapidly in the past five or six years. Events such as the Pacific Fire Gathering in Oregon have seen attendance spike 200 to 400 percent during this time. And in Washington, the scene’s epicenter is Gasworks Park. Every other week, it attracts roughly 50 fire dancers and “flow artists” (those who incorporate lights with dance choreography) from all over Puget Sound, ranging from Tacoma to Marysville.

“Gasworks is kind of the Mecca for the local flow arts scene,” says Carmen Call, a local second grade teacher who goes by Turnity on the flow stage. Call has “spun” for six years, starting with hula-hoops. But the dancing equipment at Gasworks runs the gambit, and can include anything that can have wicks or lights added to it, ranging from simple lighted balls on short chains to elaborate fire staffs, swords and fans. Photographers flock to get a piece of the action for their portfolios, and passersby gasp at the artistry and technical skill on display.

The increased local popularity of fire dancing and flow arts is largely attributed to Spinurn (a combination of the words “spin” and “burn”), which organizes the Gasworks events. A man who goes by Kopernous Sparks founded Spinurn with his friend Brent May in 2010, to help connect new spinners with experienced performers. 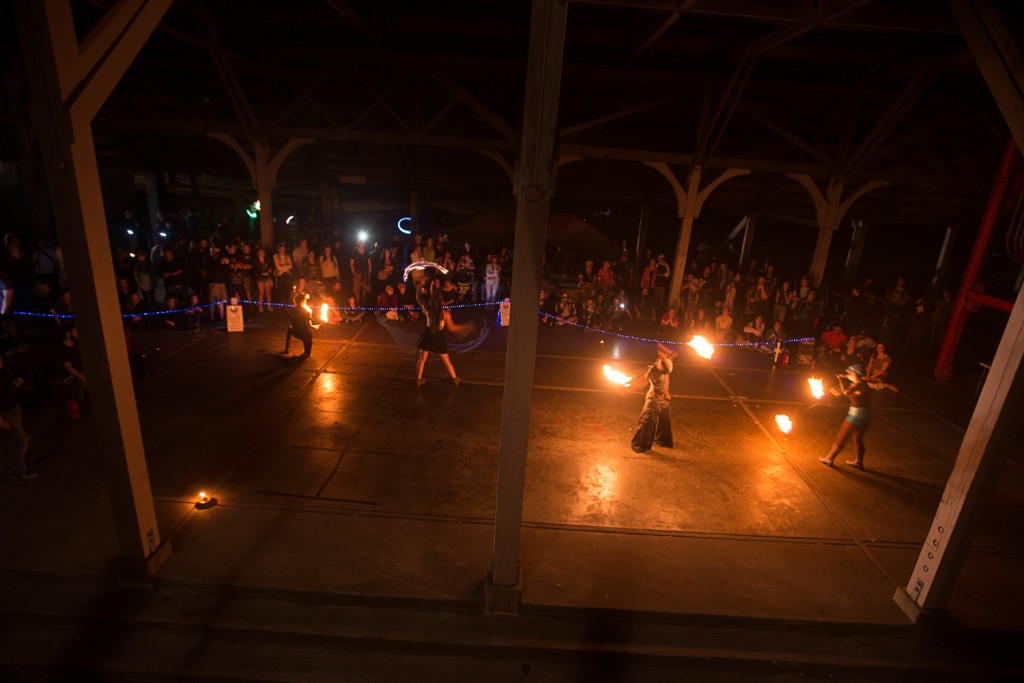 “Fire spinning really got its start at Burning Man, and I wanted to spin but I’m a cook and don’t have much money,” says the Seattle resident between cigarette drags, referring to the eclectic annual arts gathering in Nevada, which attracts colorful performers from across the country.

So Sparks started learning by himself at Golden Gardens. At the time, he said, Seattle would fine un-permitted dancers and performers up to $2,000 for practicing in public spaces. The danger of spinning without safety precautions and Seattle’s regulations against open uncontrolled flames led him to create Spinurn and organize biweekly events.

Spinurn was responsible for organizing Puget Sound's amateur spinners and experienced professionals (yes, people make a living doing this) in a push against city regulations that restricted their activities.

“[Spinning is] my balance in the chaos of day to day life,” says one of Spinurn's chief organizers, who goes by Aetheria de Fluery at the events. De Fluery defines Spinurn’s goals as providing safety, instruction, and community to spinners. Taking lessons from larger organizations and events like the Pacific Fire Gathering, Spinurn’s organizers provide dedicated safety areas and fueling locations at Gasworks to minimize risks to people and property. 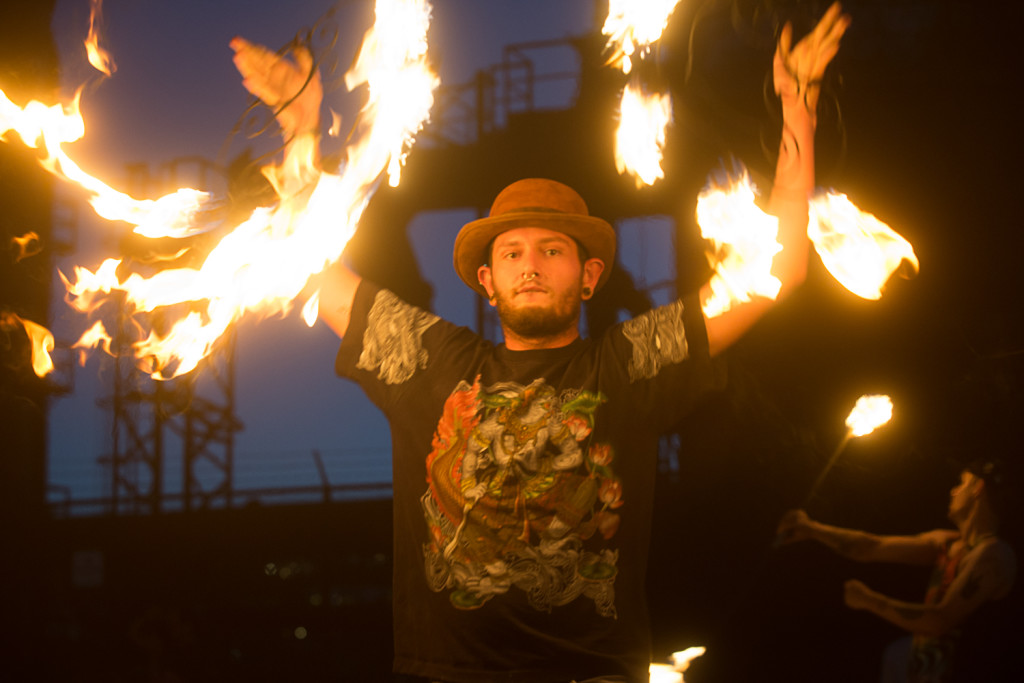 At Spinurn events, participants are welcome regardless of experience, as long as they can pay five dollars for fuel costs — Spinurn regularly goes through 13 to 15 gallons of fuel in an evening. There are a number of props available to participants, including intricate spinning staffs.

More experienced dancers also have the chance to compare notes with each other and learn. They exchange tips about how to breath fire, how to perform movements and good practices when dancing.

“When you’re just spinning in your backyard, or using videos online you lose some of that,” says de Fluery.

Spinurn touts its community as its largest draw, bringing together people from a wide variety of backgrounds, and providing them a space to find friends and mentors. For some it’s an anchor in an otherwise volatile life, for others it’s a place to express themselves where they feel comfortable. Some jump in completely new to flow arts while others upgrade after years of spinning light sticks at raves and music festivals.

Drew Bowen, a 22-year-old who started fire dancing when he was only 11, joined Spinurn two years ago. He was hesitant to get into the community, worrying that it would be elitist or exclusive. Instead, he found it was tied together by a mutual enjoyment and fascination with fire. 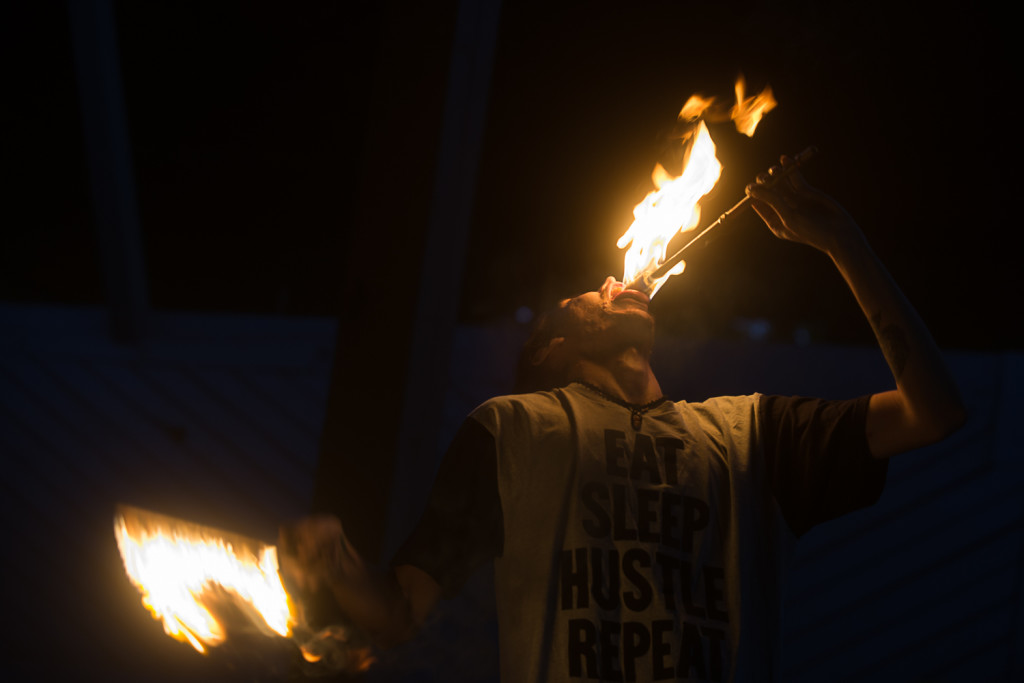 “When I finally got to that community, I thought ‘these are my people,'” he says. “It’s one of the best places I’ve ever been in my life. I feel at home here.”

Tierany “Seriflame” Rablovsky has spun fire for a decade, performing with local troupes as well as at Burning Man. Performance runs in her family, which includes a world-famous yodeling grandfather and mother, and she has performed as a dancer since she was 13. Similar to Bowen, she says that making human connections is the most important part of her participation in the Gasworks events.

“My favorite thing to express is the enjoyment of it,” she says. “My biggest compliment is getting people interested.”

Seriflame says that making that connection isn’t done through complicated choreography or elaborate spinning, although those things help. The best performances, she and her husband says, come from making a genuine connection with an audience.

“When you find people you connect with,” she says, “magic happens.” 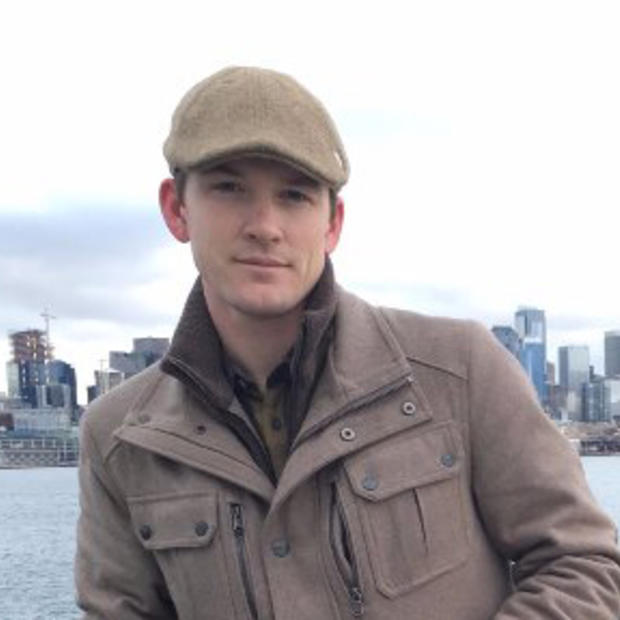 Ross Coyle is a freelance journalist in Seattle. He enjoys documenting issues and trends in education, the arts and local life. His work is visible at www.rosscoylemedia.com.