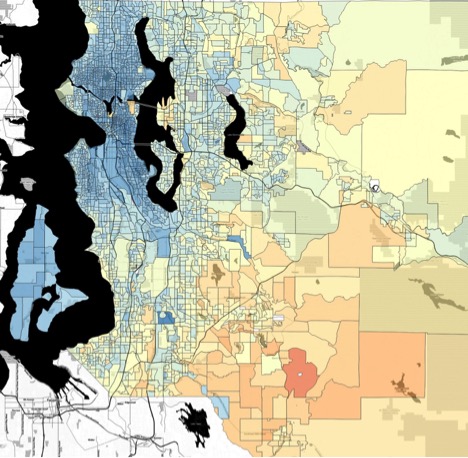 King County’s suburban Eastside, a traditional swing area, was unusually blue in this year’s primary. Above, the partisan results for Governor by precinct.

Labor Day is upon us, and in the world of politics, that brings a time of reckoning. Historically, this is when campaigns coalesce into a final form. Polls begin to settle. Voters tune in, and previously fluid opinions tend to become more set. In other words, it’s the time of year where even the most optimistic of campaigns must confront reality.

This year, the reckoning is likely to be harder for some than in past years. With the final results now confirmed from the August primary, we’ve received as strong confirmation as we’re going to get: Donald Trump is a weight on local Republicans that cannot be ignored.

First, a little history. Back in May, I wrote that this year’s Washington presidential primary results were foreboding for local Republicans. In particular, I argued that there were signs that Republican-leaning voters in wealthy, educated suburbs were doing more than turning away from Trump: it appeared that a number were switching over and casting Democratic ballots.

At the time, the response I got from Republican thinkers was mixed. Some wrote me to express anxiety about impending doom. Others were quite confident that their local candidates, typically able to win in hostile environments, would be fine. A few dismissed the argument, asserting that Trump would actually be a great foil for local Rs, benefiting them by providing a useful counterpoint for their measured, moderate politics.

Although the third argument is fanciful in a world where fewer and fewer voters split their tickets, the second argument – that local GOPers could stay above the national fray – is reasonable enough. Washington has twenty-six Republican legislators from districts that voted for Barack Obama in 2012, but only one Democratic legislator from a Romney district. If they could survive previous cycles in a blue state, perhaps they could weather Trump?

Now, we’ve known for a while that many Washington voters say they’ll punish Republicans for their nominee’s sins. It’s well-established that Donald Trump is a big liability with college-educated white voters. Polls show him losing this GOP-leaning group by about 5-10 points. In Washington state specifically, an August Elway Poll indicated that 38 percent of voters undecided in the gubernatorial race would not support a Trump-endorsing candidate.

The question was whether voters will follow-through on this threat, and if it would impact even local Republicans who have kept Trump at arm’s length. Based on the August primary results, the answer to both questions appears to be yes.

Take Republican gubernatorial nominee Bill Bryant. Bryant is a good test case. He’s a moderate Republican from King County with a technocratic vibe. Much like previous nominee Rob McKenna, he’s theoretically a strong fit for fiscally-moderated suburban voters. What’s striking is how nasty Bryant’s results were in many of these areas, compared to McKenna’s. Take a look at the Democrat vs. Republican margin in the August primary for Governor, versus four years ago:

The Democrats’ margin statewide has improved by a healthy 9.5 points since 2012, and much of this appears to be driven by areas with high incomes and high education rates.

The 32-point swing on Mercer Island is staggering. So is Medina, which moved from a two-to-one Republican margin to a virtual tie since the last major election. This phenomenon isn’t exclusive to the Puget Sound region, either. Although not wealthy enough to rank in the chart above, there were impressive swings in well-to-do communities in Clark County (Camas, Ridgefield) and Spokane County (Liberty Lake) as well. These areas also saw unusually high Democratic balloting in the May presidential primary.

It’s hard to hand-wave this evidence of the so-called “Trump effect” on down-ticket races. That would require arguing that Bryant is a terrible candidate for moderate suburbanites, or that Inslee has drastically improved his popularity among wealthy votes. No evidence exists for these claims in approval polling.

This case is even harder to make in the face of unusually weak results for Republican candidates in other races. Republican legislative candidates underperformed, with several suburban GOP incumbents trailing in their primary results, despite solid wins in previous years. In incumbent-adoring Bellevue and Mercer Island, even Kim Wyman, the Republican incumbent for Secretary of State, lost ground versus her open-seat run in 2012.

One would struggle to find any Republicans who over-performed in the suburbs.

It’s true that this evidence is all circumstantial. Here’s the thing about circumstantial evidence, though. If there’s a lot of circumstantial evidence and nearly all of it points the same way, it’s not long until the jury stops seeing reasonable doubt. The first time you come home to a chewed up carpet and a guilty-looking dog, you might entertain the possibility that you have an infestation of particularly aggressive mice. By the third or fifth time, that dog is probably in the doghouse.

When GOP performance in the May presidential preference primary lagged in college-educated areas, I wrote that Trump may be doing serious damage to local Republicans. I warned that that this was particularly problematic, since the GOP depends on Trump-unfriendly areas to make meaningful gains in the state legislature. The results are in. It’s time to be less equivocal.

He might not ruin the whole house, but Donald Trump is almost certainly making a mess of the Washington GOP’s electoral carpet.