A fire-breathing 'beast' takes over the EMP Museum 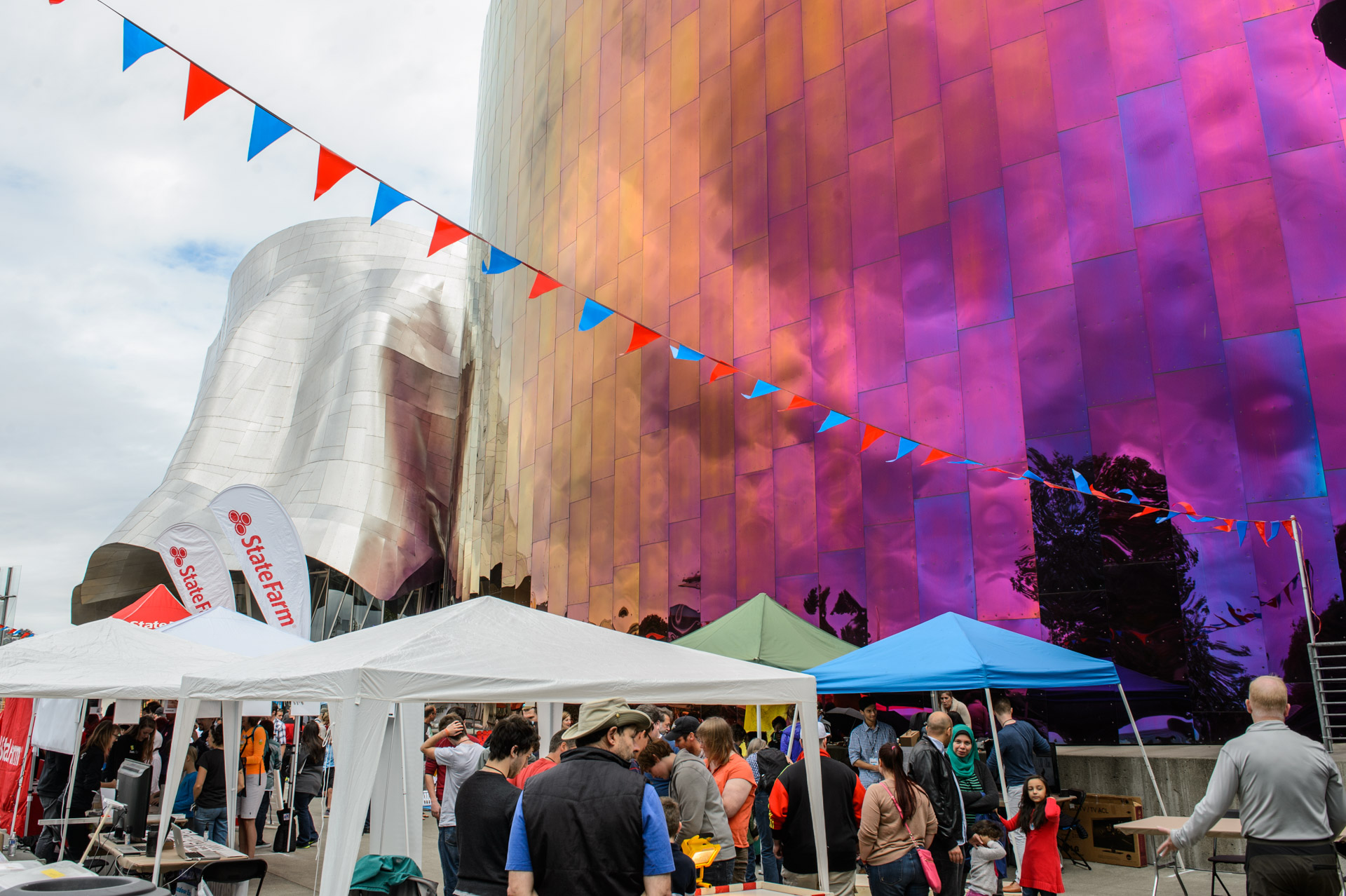 At seven tons, 11 feet tall, and with twin flame cannons that shoot massive fireballs, the eight-legged Walking Beast looks like something the bad guy in a Mad Max film would ride. Created over three years by Martin Montesano of the Moltensteelman Studio in Salem, Oregon, the hulking vehicle is just one of the inventions heading to Seattle’s EMP Museum this weekend.

The museum’s Mini Maker Faire, running on Saturday and Sunday, brings together makers of all ages for a supremely elaborate “Show and Tell,” featuring everything from robotics to woodworking to 3D printing.

Notables include the Kraken Trike, a large two-front-wheeled electric tricycle (not sure if it's allowed in bike lanes), as well as Hackerboat, a solar-electric autonomous boat that aims to circumnavigate the globe. Then there's Chassie, the joystick-operated couch. That one's pretty self-explanatory.

"I was first inspired by the AT-AT walkers in the Empire Strikes Back," says Montesano of the Walking Beast. "And then Ohio State University did an experiment on what they called the Adaptive Suspension Vehicle, a six-legged walking machine."

Here I couldn't help but gush: "But yours has a much better center of gravity than the Imperial walkers in Empire."

"Correct, this one has a much lower center of gravity. It’s intently designed that way."

The event will be replete with activities like rocket making, cosmetic chemistry, soldering, and paper-airplane building. Yet one of the core reasons to visit is to run all of your own stupid invention ideas by genuine inventors, such as my idea for a hover toaster, self-tying shoes, gummy worms that regenerate themselves like actual worms, a scented candle that smells like a candle right after you blow it out, and nine-layer dip.

Unfortunately, they don't give you a booth at the Mini Maker Faire if you only have ideas for inventions, but whatever. Their loss.

One of the event’s more tempting purchasable items are small WWI and WWII warships that can actually shoot and sink each other. It’s a much better version of Battleship, though "There are only about 500 to 1000 warship hobbyists across the country," says their maker, Stephen Morgret of Strike Models.

The model warships of these hobbyists can be up to 6'4 in length, and armed with 50-round semiautomatic BB canons, with which competitors try to sink their opponents. Though it would be incredibly tempting to take one of these into a public pool or hot tub and harass people, matches are always held in shallow ponds with no foot-traffic, and definitely not rivers or oceans.

"We really prefer to get our ships back," says Morgret.

The event will additionally feature a handful of projects created by youths, including Neurobot 2.0, a robot made by Dan Joshua that can move forwards and backwards depending on the focus of the user. Chief among them are the Mannby daughters. It's not often that I'm intimidated when speaking to little kids, but Anantika,12, and Aditi Mannby,10, are not your run-of-the-mill children. They could probably build a functioning mill if they wanted to. Over the years, Anantika has built a rover that picks up magnets, a large machine model of a virus (called Death Star 2000), a wooden set of wings on a backpack that open and flop when you pull a string, a gravity racecar, and a tall mechanical dragon named Bluthe.

"It breathes fire, and its eyes light up, and move left and right and up and down," says Anantika, "and its tail moves, and its head moves up and down, and it walks, and it roars."

Both girls have taken part in Destination Imagination, a nonprofit that develops project-based learning programs which combine STEM education with entrepreneurship. Along with the virus model and the rover, the Mini Maker Faire will also feature Aditi's hovercart.

"The hovercart has a driving mechanism, and it also floats like a hovercraft," says Aditi, "because our challenge was to have two different movement things."

As a contrast, when I was 10 I attached action figures on a string to my door, so that when you opened it Batman would rise up in the air, and then just hang there. My older brother had to help me.

Though this is easily one of Seattle’s most entertaining educational events, there might be a slight risk in attending. Montesano assured me that the Walking Beast has never lost control and started randomly trampling and attacking people, but I can’t be sure.

One can imagine it going crazy at the fair, with all the other inventions having to work together like X-Men to stop the beast. I can see the battleships firing upon it, allowing the hovercart to trip the beast into a giant vat of my patented nine-layer dip, saving everyone.

It could happen. That alone is reason to go.