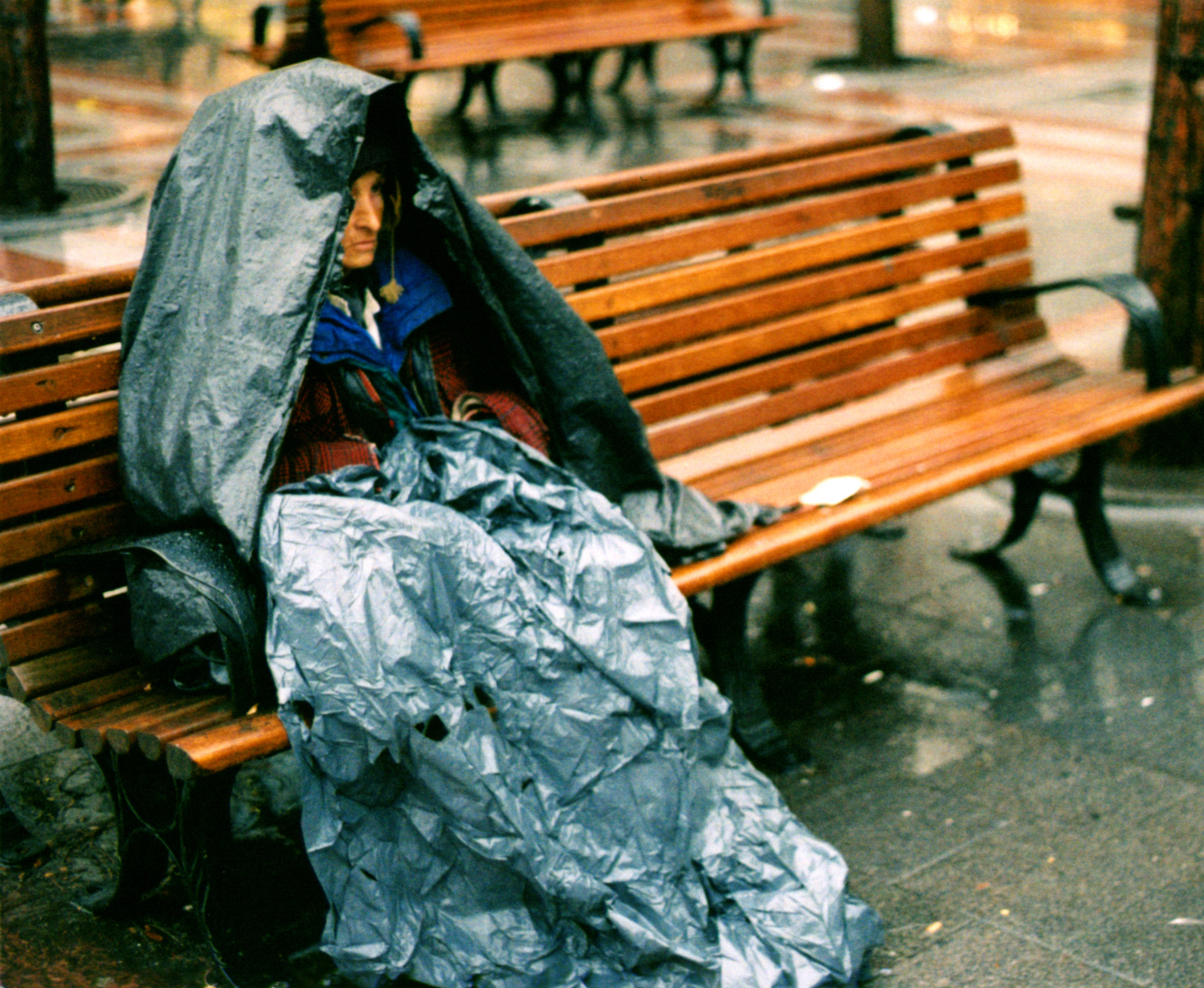 A homeless woman in Seattle prepares for the rain.

On Tuesday, the Seattle City Council advanced a proposal to drastically change how the city conducts homeless encampment cleanups, based largely on policies supported by the ACLU, Columbia Legal Services and other advocacy organizations.

While the council’s 7-1 vote only sends the proposed legislation to the Human Services and Public Health committee, it was something of a thumb in the eye to Mayor Ed Murray, who has said the ordinance would let people camp outside wherever and whenever they want.

That all the councilmembers — save absentee Debora Juarez and no-vote Tim Burgess — are in favor of advancing the proposal is the most concrete example of the budding disconnect between the council and mayor’s preferred response to homelessness.

It’s September now, which means the weather’s turning cold and the Seattle City Council has just returned from an extended recess. Under normal circumstances, those two events — the political and the meteorological — would have little relation.

But as Seattle continues to live under a State of Emergency, declared last November because of the rising tide of homelessness in Seattle, they’ve become intimately connected. Every day the light fades earlier and the rainfall increases, the urgency to overhaul Seattle’s homeless approach grows.

On several occasions Tuesday, councilmembers referenced the changing seasons — fall and the “impending winter,” as Councilmember Lorena Gonzalez put it, are very much a force in City Hall. It is a more harrowing deadline than those self-imposed by elected officials, and has perhaps lent to the tension between all parties considering the city’s response.

On the streets, winter is no less forgotten. “I’m trying to get the f**k off the street,” says Michael Lazemby, sitting in his tent near Fifth and Yesler.

He’s on a mattress, part of a large tent interior decorated thoughtfully enough to look like a true bedroom. His friend, Antonio Detore, sits just outside the tent. Detore’s hoping to move into one of SHARE’s indoor shelters, which just reopened after a long period of closure.

For others, like K.L. down near the Union Gospel Mission, even the threat of rain isn’t enough to make him go into a shelter. He just laughs when asked why it’s so bad. When asked if he’s done a winter outside before, he says, “This isn’t my first rodeo.”

As demand expands inversely to the temperature, the shelters are preparing. John Walling, a guest services administrator with Union Gospel Mission, told Crosscut earlier this year that they try to put out extra cots on cold nights. But Greg Jensen with Downtown Emergency Services Center said there isn’t a whole lot they can do.

“We’re already running at capacity,” he said. Day services, like showers and laundry, see more traffic as people seek refuge. Sleeping quarters are about the same.

The controversy around homeless encampment cleanups or “sweeps” largely concerns questions about where and when people should be allowed to live outside. As the rainy season begins, it’s more important for the city, the police, the homeless and the service providers to establish those definitions.

Reform advocates have been arguing for years that the city’s process for sweeping up encampments is broken — that it puts undue stress on the homeless without solving anything.

Murray for the most part has remained committed to encampment cleanups, arguing that they’re for the good of both the community and the people living outdoors.

But as pressure from advocacy organizations turned to pressure from the press and the council, Murray relented and adopted a now-familiar tactic — starting a task force to tackle the issue.

Almost immediately after Murray announced the task force, the advocacy organizations released their own proposal, short-circuiting Murray’s process. It would mandate a 30-day notice period and promises of housing to the residents of encampments deemed “suitable” before their removal. Those deemed “unsuitable” would get 48 hours notice, allowed the opportunity to clean up the encampment and be offered a different place in the city to pitch their tent if evicted. Exactly what constituted a “suitable” encampment was left largely undefined. In the case of wrongful evictions, campers would receive $250 in damages.

The ordinance would also place more stringent requirements on accounting for people’s things.

Murray slammed the proposal, arguing it would open up parks and schools to camps and restrict police and fire department access. The advocacy organizations sent a rebuttal last Friday, stating they don’t intend to open up the entire city to encampments, only to make them more coordinated and humane, and calling Murray's concerns "hyperbole."

Minutes before Tuesday’s meeting, Councilmembers Lisa Herbold, Mike O’Brien, Kshama Sawant and Rob Johnson unveiled a proposal that tracked closely to that of advocacy organizations like the ACLU. The decision for the council then became whether to push the proposal forward. Councilmember Lorena Gonzalez quickly through in her support.

"A new strategy for managing encampments in our city has never been more urgent," she said from the dais.

Councilmember Burgess, on the other hand, seemed to draw a dichotomy between the need for public safety and the city’s response to homeless. "The proposed ordinance is not the balanced approach that the people of Seattle deserve," he said.

He had plenty of support in the crowd. There was significant representation from the Chinatown/International District’s senior citizen population, who repeatedly connected the homeless population near Jackson and King streets to a rise in drug dealing and crime. David Leong of the CID Chamber of Commerce said the neighborhood’s elderly were being accosted for their money.

Jennifer Aspelund of the Neighborhood Safety Alliance spoke the most forcefully. “"Since when did the city of Seattle become a maid service?" she shouted, telling the council that if they passed this ordinance they’d be “out of their minds.”

But during the meeting’s latter half, the crowd spoke more favorably towards the ordinance. Lisa Daugaard, Director of the Public Defenders Association, which helped craft the ordinance, called it a “false dichotomy” to distinguish between addressing the needs of the homeless and public safety. Sonny Nguyen of API Food Fight Club rejected the notion that all of the CID community was against this approach. Those opposed, he said, “do not speak for the Chinatown-International District."

The meeting ended as several social justice-related meetings have recently, with a shouting match between Council President Bruce Harrell and members of the audience.

Chair of the Human Services and Public Health Committee Sally Bagshaw promised Tuesday morning that she would pass legislation related to homeless encampments by the end of the month, before budget season and before things got too wet outside. Similarly, Murray has promised his own legislation, built on the recommendations of his task force, by the end of September.

In the meantime, the council will certainly tweak the ordinance they forwarded along Tuesday; despite the 7-1 vote, there is still skepticism among at least four councilmembers. For example, what exactly will be considered "suitable" and "unsuitable" locations of encampments?

As Murray will not sit on the sidelines of this issue, the introduction of his own proposal later this month could change the calculus of his allies in the council.