City closer to clearing out 'the Jungle' 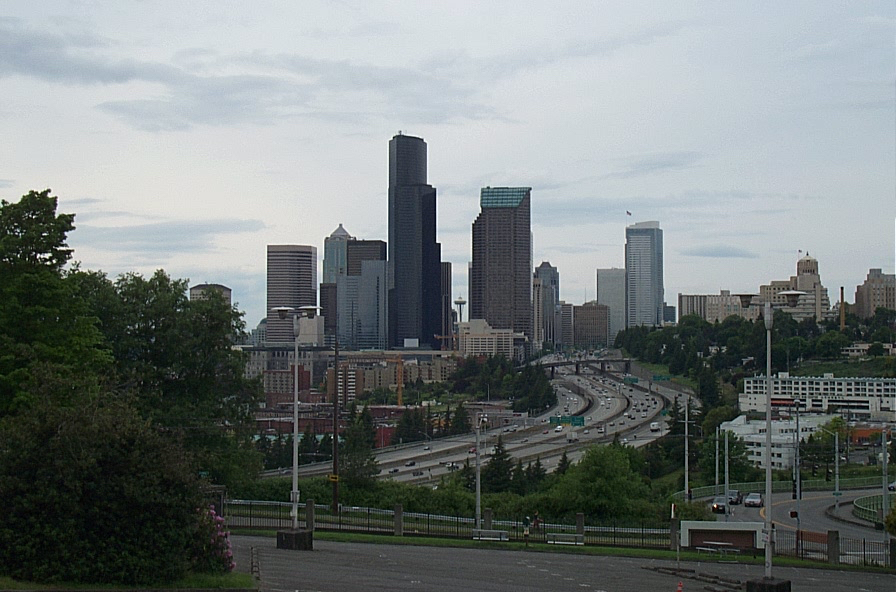 Areas under some of I-5 south of downtown could be fenced off to control homeless encampments.

The Seattle City Council voted 4-2 Wednesday to advance the mayor’s plan for final closure of the East Duwamish Greenbelt — the vast space beneath and around I-5 known as the Jungle, home to hundreds of homeless.

While the resolution will now get its day before the full nine-member council, even some of those who voted “aye” showed great concern that this final push to close off the notorious space would just be a continuation of faulty encampment removals, known as “sweeps” by some.

Although Councilmember Lorena Gonzalez voted in favor, she warned of “unintended consequences that ultimately do not serve the purposes” of the city. Moments before the final vote, she passed out her own office’s analysis of the mayor’s 9 ½ block strategy — a police blitz of the 9 ½ blocks near Pike Place and Westlake Park begun last year — that she said showed crime just being pushed to another part of town. This, she said, “is what happens when there are focused resources,” a warning that intense efforts on one particular area will have spillover effects elsewhere.

The desire to close the greenbelt has been a goal of many mayors before Mayor Ed Murray took office and has long been a point of drama in the city. Events over the last year have continued that trend, culminating with a deadly shooting in the Jungle that occurred as Murray was giving a televised speech on homelessness. Had it been up to the mayor alone, he would likely have pushed harder, faster and earlier to empty the space, which he sees as deeply unsafe.

But the pushback, coming from both homelessness advocates and members of the Council, has been largely grounded in one question: If you kick people out, where will they go? As a result, the debate over how to best address the space has extended for months.

Murray introduced Wednesday’s resolution last month. Leading up to its introduction, teams from Union Gospel Mission had been conducting what the city has referred to as “intensive outreach,” to empty the nearly 400 people living in the greenbelt in late May when the effort began. As of early August, UGM estimated that only 60 people were left, with 70 people accepting alternative shelter or space to camp.

If the measure is approved, a clock will start: Within 10 days, the final 60 people will be asked to leave. After that, crews will begin to clear the leftover items and brush, a tricky task that should involve classifying and storing personal things — something that has not always gone smoothly. After that, state crews plan to build a road to access the expansion joints along I-5 that Travis Phelps of the Washington Department of Transportation told Crosscut last month need constant inspection. And finally, the hope is to “activate” some of the space, meaning turn it into a space that could theoretically have some appeal to the general public and discourage crime.

In some ways, the resolution comes at an awkward time. There are parallel efforts to redefine how the city carries out cleanups or sweeps of homeless encampments. One comes from the ACLU and other advocates and puts stricter requirements on when and where someone may be asked to leave. The other is the mayor’s new task force to set out clearer rules for dealing with campers. But, while both of these efforts are moving forward, neither has become anything close to official.

A lot of the skepticism for the mayor’s greenbelt plan is the result of the fact that those protocols have not been clarified. Councilmember O’Brien in particular couldn’t reconcile what, exactly, had happened to the nearly 300 people who had left the Jungle but had not gone to shelter or a city-approved encampment in SoDo. “I do want to highlight that there are a couple hundred people that are no longer [in the Jungle] and are out there on the streets,” he said.

“That continually reshuffling of folks concerns me," O'Brien said. "That’s why I think we need a citywide policy on how we do that.”

Councilmember Sawant spoke in blunter terms. “No matter how many words you put in to make this seem humane, it is still a sweep,” she said. And as she said later, because it’s a sweep “the reality is this is going to be ineffective and inhumane.”

While neither Jeff Lilley of UGM nor Scott Lindsay, a senior aide to Murray, could give a definitive answer for where those 300 people had gone, both defended the efforts. Lilley contended that the outreach has gone well above what the city called for several months ago. “Not only was [outreach] done, it's probably never been done on that level," he said. Now is the time for a tough love, Lilley seemed to say. “We have to put some pressure on them and say this space isn’t healthy for you.”

Lindsay echoed that point. ““We’ve offered everyone there somewhere better … . Now it’s time for the city and state to say it’s not safe to be here,” he said. In other words, Seattle and UGM have done everything they can and now it's time to shut the gates. Lindsay has said in past that arrests of people who won't leave an encampment are extremely rare, but the resolution does not rule it out.

Several former residents of the Jungle who now live in an encampment near Airport Way and Royal Brougham addressed the committee. They asked for simple things: water, security, more dumpster spaces. They also asked for perhaps less simple things, at least politically, like a needle disposal.

Regardless, it was reminder that amid all these policy discussions are people. There seem, in fact, to be a dizzying number of proposals and initiatives for Seattle's homelessness crisis: Not just the mayor's encampment task force and the ACLU's ordinance, but also a Pathways Home report last week from consultant Barbara Poppe recommending adjustments in the city's priorities, the forthcoming opioid task force recommendations, and now a threat of a state bill from Sen. Mark Miloscia, R-Federal Way. The state senator, who is running for state auditor, wants to bar any jurisdiction — he's talking about Seattle — from acting more leniently toward encampments than state standards suggest, and he would specifically bar camping on sidewalks and public rights of way.

The council's approval Wednesday does not guarantee the success of the mayor's measure before the full council. "I’m going to vote yes," said Gonzalez, "but that is going to be contingent on getting satisfactory information." Councilmembers Debora Juarez, Rob Johnson and Lisa Herbold are also not sure "yes" votes.