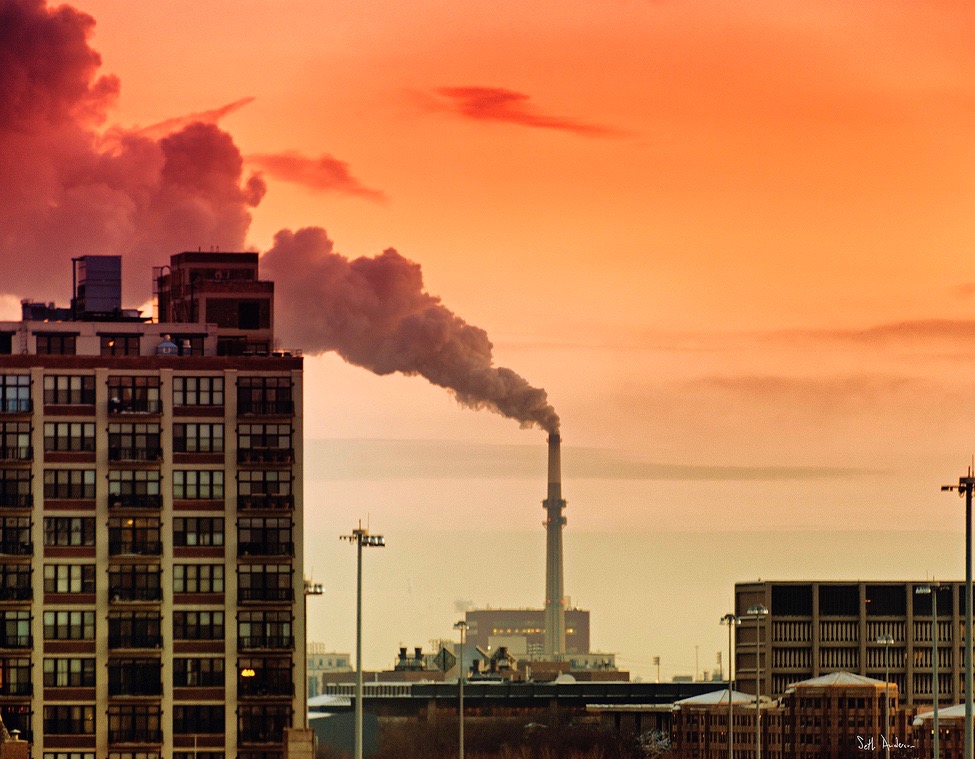 We’re three people of color. Two of us are immigrants. Another one of us grew up in poverty with two siblings and one working immigrant parent. We care deeply about climate change. In fact, we’ve devoted much of the past year to passing Initiative 732 in the November general election.

I-732 is a citizen ballot initiative to fight climate change; to make polluters pay when they damage our air, water and health; and to give that money back to the people in the biggest anti-poverty measure in this state since groceries were made sales tax exempt in 1977. I-732 tackles the biggest issue facing our planet and also the most unfair tax system in the nation.

Today, big polluters can spew carbon dioxide – and smog and asthma-producing particulates that come with it – into our environment for free. We all pay the bill, in acidifying seas, in drought, in forest fires and in damage to the health of our kids.

Frontline communities – those of lower income and those of color – get it the worst, as they’re most likely to be near a power plant or a highway. Lung cancer and asthma hospitalization rates for children and adults are higher for the Duwamish Valley compared to King County as a whole, with asthma rates 67 percent higher for children and 60 percent higher for adults due to  air pollutants released with the burning of fossil fuels. As the Antarctic ice shelf melts, parts of Seattle will be underwater by 2050, according to projections by Seattle Public Utilities. Neighborhoods in South Park and Georgetown are expected to face daily flooding by early next century. The Yes on I-732 campaign understands the environmental and economic inequities that exist in Washington, and we believe I-732 is an important step toward addressing these inequities.

Washington has the most unfair state tax code in the nation. Our taxes hurt people in poverty harder than those of any other state. A large reason for that is our highly regressive state sales tax, which hurts low-income people (disproportionately people of color and immigrants) far more than the wealthy.

I-732 uses the revenue from the carbon tax on pollution to reduce the sales tax by a full percent. This will not only help alleviate the tax burden for people who consume fossil fuels in the form of gasoline and electricity, but it will also help low-income families. It also funds – for the first time – and expands the Working Family Tax Rebate (WFTR). WFTR is a program that was enacted in 2008 by the state government but never funded. I-732 will give 460,000 low-income families across the state up to $1,500 a year in tax relief. The initiative also virtually eliminates the B&O tax on manufacturers to help them stay competitive, keep good jobs in Washington and give an economic incentive for businesses to reduce emissions, be more energy-efficient and invest in clean energy.

Let’s take a look at how I-732 makes Washington taxes fairer by looking at how state and local taxes would change with the measure’s funding of the Working Families Tax Rebate. 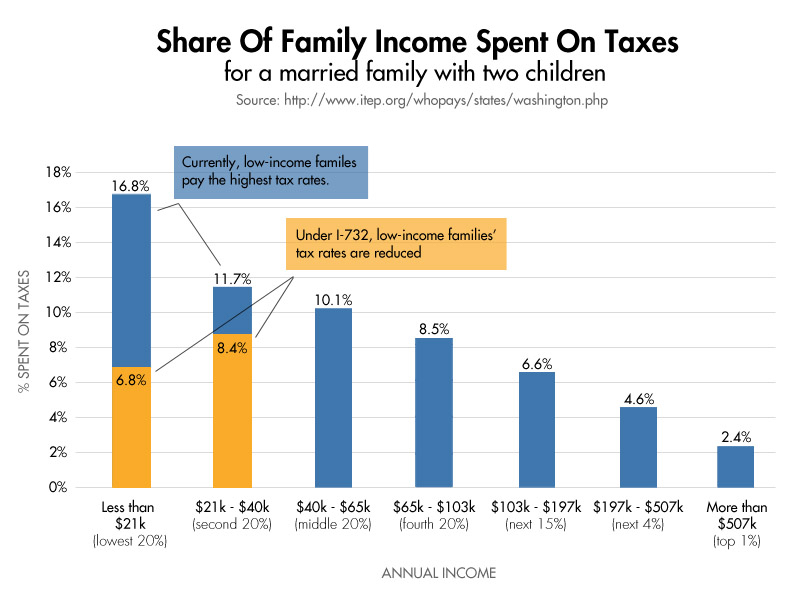 This summer, a new campaign, led by some of the biggest polluters in the state, was launched to oppose I-732. It is led by the Association of Washington Business and funded by five top money donors including TransAlta, Washington’s only in-state coal plant and single largest carbon emitter. Once again we are faced with big-money groups, along the lines of those who have for decades funded climate change denial and climate science skepticism campaigns; now, they are fabricating their own dubious reasoning to undermine policy solutions to climate change.

If big polluters don’t pay their fair share for the price for pollution, the heavy burden will continue to fall on low-income families, communities of color, our children, wildlife and future generations. We must pass I-732 and do more for environmental justice.

Sightline Institute, a respected independent think tank, recently published a three-part analysis of I-732. After looking closely at the science and both sides of the issue they debunked claims that I-732 would leave a “budget hole” and concluded that I-732 is “a worthy policy to put Washington on a path to cutting pollution and encouraging clean energy while also helping low-income families by making Washington State taxes less regressive.”

The 2016 election is our best chance to pass an initiative that fights climate change and alleviates poverty. A recent report by CarbonBrief says that we have five years until we can no longer keep global temperature rise below 1.5 degrees Celsius, the best hope for reducing impacts on food production and vulnerable ecosystems. We cannot afford to wait. We have a moral responsibility to act on climate now and vote Yes on I-732 in November.

As part of its general election coverage, Crosscut is beginning to publish opinion articles presenting various views on ballot measures. An op ed opposing I-732 will appear later this week.

Priya Cloutier is the founder of Cloutier Global, an intellectual property law firm that supports start-ups and emerging companies. Prior to earning her law degree, Priya earned a bachelor’s degree in nuclear engineering and worked at Los Alamos National Engineering Laboratories, Idaho National Engineering Laboratories, and Hanford. Jason Puracal is the Director of Finance & Operations at East Shore Unitarian Church, Co-Founder & CEO of his CleanTech start-up company ZILA Works, and Board member of the Innocence Project Northwest. He holds a B.S. in Zoology and B.A. in Economics from UW, as well as an MBA in Sustainable Business from Pinchot University. Aaron Tam is the King County Campaign Coordinator for Carbon Washington, the grassroots organization behind I-732. Aaron recently completed a double degree in Environmental Science: Wildlife Conservation and Political Science at the University of Washington where he researched the impacts of climate change on people and wildlife in the Pacific Northwest, as well as studied policy solutions for socioeconomic, environmental and racial justice issues.