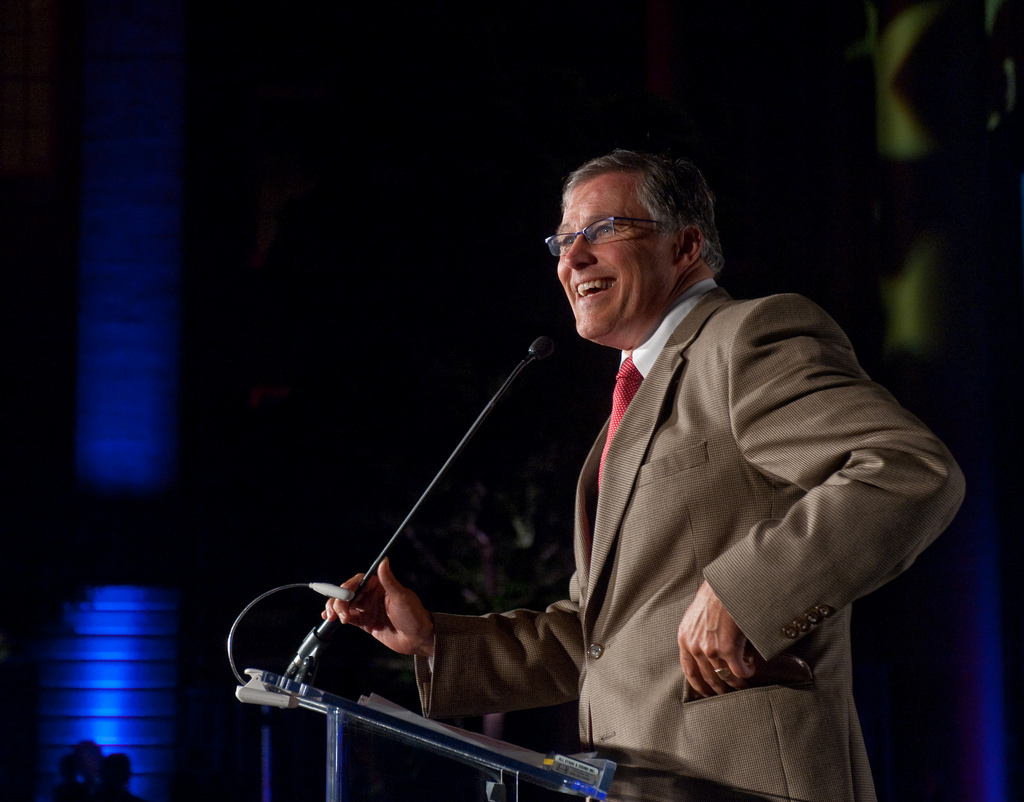 Gov. Jay Inslee at the 18th Annual "Evening with the Stars of Energy Efficiency" Awards Dinner

For a select group of politicos, the choice is much simpler: they’re supporting both candidates. But the number of donors double-dipping this year is far smaller than the last gubernatorial race, reflecting Inslee’s perceived strength in this year’s election.

Twenty individuals, two political action committees and two businesses have donated money to both Inslee and Bryant this year, sending a total of $67,000 into this year’s race for the governor’s mansion, according to a review of records from the Washington Public Disclosure Commission.

Donating thousands of dollars to opposing candidates is a fairly common occurrence amongst the donor class, according to Mark A. Smith, a professor of political science at the University of Washington.

“It’s always about access, getting your phone call returned,” Smith said. “Governors get a lot of phone calls and most of the people trying to reach them don’t make it through.”

In the mind of double-dipping donors, they’ll be able to say they supported the future governor regardless of who wins. They are primarily from industries like healthcare, agriculture and real estate, but as Smith said,

“They are listed as individuals but I think we should list them as businesses… they are really giving on behalf of the business.”

Smith said the total amount of money at stake for these businesses is far greater than the legal donation cap, which is $2,000 for the primary and $2,000 for the general election when donating directly to a gubernatorial campaign.

“When you look at the amount of money we’re talking about, chuck in $2,000 for a gubernatorial race, that’s chump change,” Smith said.

One donor in this year’s double-dipping class is Ann Blume, a real estate developer and prominent fundraiser for the national Democratic Party. Blume, who gave $3,800 to Bryant and $4,000 to Inslee, hosted a $38,500-per-plate lunch fundraiser for President Barack Obama at her family’s lakefront mansion in Seattle in 2012. Her husband Bruce donated $50,000 to Obama’s inauguration party.

Inslee has a safe lead over Bryant in this year’s election. He received 152,893 more votes than Bryant in the primary, his poll numbers have him in the double digits over his opponent and Inslee’s campaign has raised $5.4 million more than Bryant’s.

But in 2012, Inslee was far from a sure thing. He had no incumbency advantage, he had never won a statewide race in Washington and his opponent outraised him by $1.5 million. The donor class responded to Inslee’s uncertainty with more hedged bets.

The total amount raised in 2012 was also far greater than this year. In 2012, both candidates raised a combined $26.1 million. This year both candidates have raised a total of $11.3 million.

The most honest account from inside the donor class may come from the opening act for Bryant and Inslee’s debate. Republican presidential candidate Donald Trump — who will face Hillary Clinton before the gubernatorial debate Monday night— is in the strange position of being a repeat donor to his opponent. Trump donated to Clinton’s campaigns in 2002, 2005, 2006, and 2007 and sent a $100,000 check to the Clinton Foundation.

“I was a businessman. I give to everybody,” Trump said during a primary debate this August. “When they call, I give. And you know what? When I need something from them, two years later, three years later, I call them, and they are there for me. And that’s a broken system.”