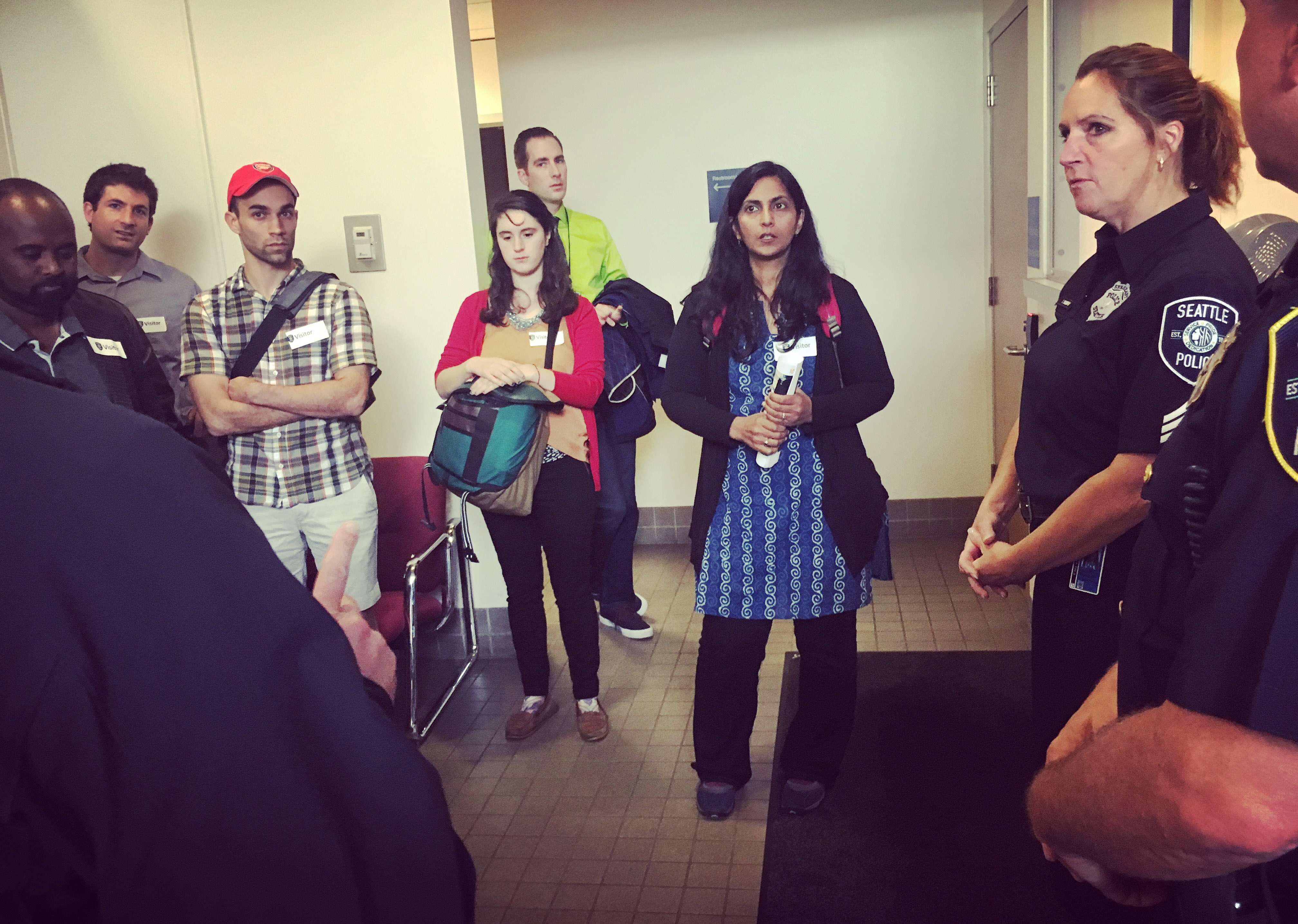 The fight against building what could become America’s most expensive police precinct station —best known by the campaign’s hashtag #BlocktheBunker —has always been about more than the brick and mortar structure currently near North Seattle College, and the purported need to replace it with something far grander. So as Councilperson Kshama Sawant and a cadre of activist allies were led through the precinct’s current facilities Friday, there was a fundamental disconnect between talking points.

Police and city officials wanted to discuss what they viewed as a capital project, the proposed $149 million facility to the north. Sawant and her company wanted to talk about the nature of modern policing. Why all the riot gear? Why do the officers need to participate in such long-range firearms training? Do they even need guns? How does the size of a building relate to the sort of training an officer receives?

A man in a bulletproof glass case greets anyone coming through the front doors of the current facility, but other than that, it doesn’t have the look of a police precinct. The entryway is smaller than a doctor’s waiting room, and has lost space over the years as plaster walls have gone up to create storage to the east, a meeting room to the west.

The guts of the building are no less cramped. Cubicles are honeycombed into small rooms for supervisors. For the rank and file, there’s the cafeteria, the gym and the locker room, all tight. 200 officers work here — 80 per shift. At the start of each rotation, they must all fit into the roll call room, which is certainly meant for fewer than 80.

Although it was built in the 1980s, the city started talking about replacing it in 1998, a blink of the eye for something as significant as a precinct station. The story goes that the original building didn’t account for growth in the department, and quickly became over capacity.

In recent years, though, the conversation for replacing the facility has taken a turn for the abstract. Proponents are quick to mention the police reforms the Justice Department is demanding, and the training requirements those include. A new building would provide space for this, they say, as well as a more welcoming bridge to the community.

Suddenly, the $149 million building (already down from $160 million) was not just about where to store staff, but also how the department can move into the 21st century, in the words of SPD’s Chief Operating Officer Brian Maxey.

But that argument raises questions about what a 21st century police force actually does. On Friday, Sawant focused on that duality. There seem to be two conversations, she said, “one of space and one of substance.” She doesn’t understand, she said, “how need for training is necessarily correlated to space.”

Another outspoken #BlocktheBunker critic on the tour, journalist Ijeoma Oluo, asked about police culture. “Will $150 million fix that?”

Activist in the East African community Abdi Mohamed wondered why a 21st century police force needs firearms at all.

Indeed, the tour highlighted a deep tension between a portion of the community and the police. As well-known activists such as Sawant, Oluo, Real Change founder Tim Harris, NAACP head Gerald Hankerson, and Director of the Low Income Housing Institute Sharon Lee paced through the hastily planned tour, certain details stood out as a harsh clash of cultures.

There was Sawant, holding up gun heavy magazines for her staff to photograph. There was Harris, wondering about the bags of riot gear. There was the gun range they crammed into, a bucket of bullet casings near their feet and a stack of silhouettes for target practice.

Most striking was the paraphernalia pasted on the lockers of the officers. NRA membership stickers, “Punisher” skulls, jokes that were perhaps not jokes. On several lockers were disparaging images of the Obama “O” used in his campaigns, like cartoon character Calvin peeing on it.

Maxey said he believed it was the officers’ first amendment right to display those stickers, but that the department does not condone disparaging the country’s first black president. The department would review the policy, he said.

By the end of the tour, it was clear that minds were not being changed on the need for a new facility. The new building “almost feels like a reward” for police, said Hankerson, right at the time when police are under the most scrutiny.

The current building is small, no doubt. At least several on the tour acknowledged that. But is that enough? For Sawant and her allies on the tour, likely not. We’ll know for sure this fall, when budget season rolls around.