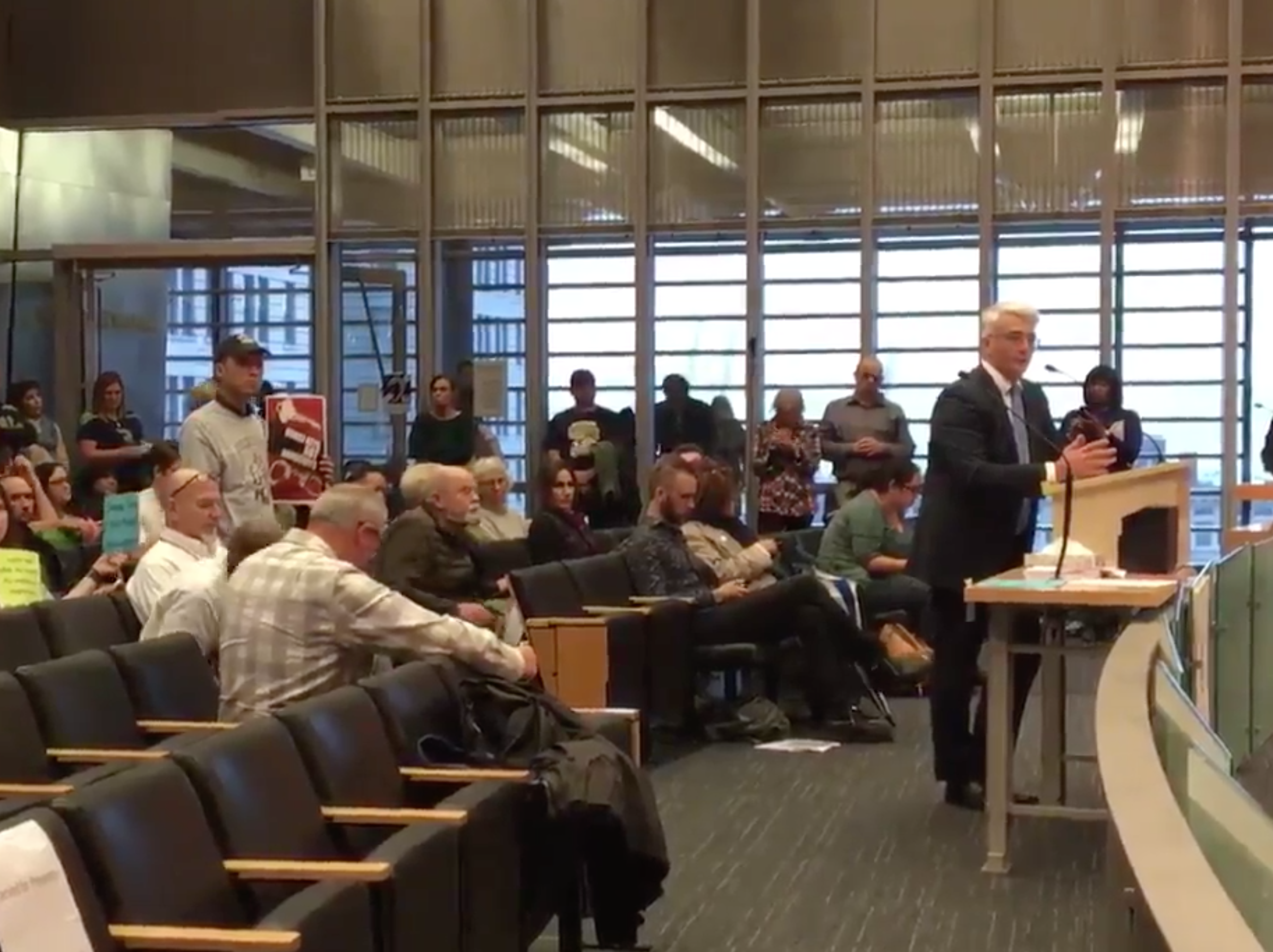 As if taking cue from the stormy weather outside, the tumultuous fight over homeless encampments in Seattle ratcheted up a notch Friday, culminating in a meeting in which Councilmember Mike O’Brien insinuated that the Mayor’s Office had leaked documents meant to mislead and stoke fear in the public.

On Thursday, a controversial bill to deprioritize encampment enforcement in parts of the city — which opponents call an open invitation to camp in parks — split into no fewer than three proposals. O’Brien made small changes to the original bill, which was proposed by the ACLU and other homeless rights advocates. Councilmember Sally Bagshaw countered with her own ordinance that more broadly restricted parts of the city from camping.

Mayor Ed Murray then floated his own response at the end of the day, promising yet another proposal that would open four new sanctioned encampments, while acknowledging that some unsanctioned areas are better for the homeless to pitch tents on than others.

The original proposal stated that if a location is “suitable” for camping, the city may only remove camps from it with a month advance notice and a meaningful offer of shelter. In some circles, the fear quickly took hold that the city was opening up large swaths of the city to camping, although proponents of the bill stated many times that it was not their intention to allow tents on high school football fields, as some critics claimed. As Crosscut reported Thursday, O’Brien and Bagshaw's proposals differ on the length of notice periods and breadth of what is "unsuitable."

Murray’s proposal, however, is more clearly an attempt to assuage the concerns of residents who worry that notice periods or required offers of housing will delay removal of tents from playfields or sidewalks. It acknowledges that suitable locations should be low priority and come with offers of shelter, but retains the right to evict people from some locations without providing an alternative location — the “extreme” cases.

The fear of homeless camps in parks reached a boiling point last week, when King 5 released internal maps prepared by the Seattle Department of Transportation and the Seattle Parks and Recreation department. These seemed to show that Councilmember O’Brien’s proposed legislation would deem places like Discovery and Seward parks as suitable for encampments.

On Friday, O’Brien called the maps inaccurate and premature.

“This is clearly not the legislation we’ve been working on. ... I need to understand who released this and why,” he said. “When was it decided it’s time to play politics with this?”

Regarding the maps’ release, attorney for the mayor Ian Warner said, “Saying we were playing politics is not a fair characterization.” He said he was unsure whether the maps were accurate.

O’Brien’s insinuation was about as pointed and serious as they come, the latest barb in a debate that has councilmembers accusing colleagues of having their facts backwards. Councilmember Tim Burgess has repeatedly said his colleagues do not understand what their encampment proposal will do. Councilmember O’Brien and others have contended that Burgess and Murray are flat-out wrong in their fears of legalized camping, and ignore the fact that people already camp everywhere.

Beyond elected officials, the idea that this legislation would mean permitted encampments on football fields and playgrounds has taken hold. However, proponents have pointed to language that says actively used public space will be off limits.

“It’s been a shame to see that this effort to improve situation…has not been heard and received in many quarters,” said Director of the Public Defenders Association Lisa Daugaard.

Public testimony during Friday’s meeting reflected the divisions over these proposals.

“If you want to conduct more humane sweeps, I think that’s wonderful,” said Katherine Gregory during public testimony. “But this work is a distraction from the work you should be doing…. You can’t tweak an essentially bad policy into something acceptable.”

As a reminder of how far the ripples in Seattle have traveled, Republican candidate for governor Bill Bryant took two minutes of his own to testify, reiterating his belief in a “zero tolerance” policy for encampments.

Julie Debons, on the other hand, took her fellow Magnolia residents to task for lack of compassion.

“How many of us know the strength of character it takes to survive on the streets?” she asked, her voice wavering. “We are a city that puts water bowls out on hot days for dogs and knits sweater for trees. I urge all of us to pool our time, energy and talents to find lasting solutions.”

Some observers, like Daugaard, fear Murray’s proposal gives him too much latitude in determining what’s “extreme.” During the meeting, she warned it could keep the city on its current path, in which people are moved from one location to the next without ever landing in a stable place.

The vitriol of this fight begins from a place of agreement: There are too many people living outside and the city’s methods for removing encampments is ineffective. Also widely accepted is that the long-term solutions to the problem include more upstream services and more and better housing.

It’s the how, where and when that have whipped Seattle — and the region in general — into a frenzy.

The council will hunker down until the end of November to finish budget talks, which usually take priority over all other matters of business. The three encampment proposals on the table will likely retreat to the backrooms until then.

No one in City Hall believes reforming encampment sweeps is an answer to homelessness. But the question that lingers, especially as Seattle looks down the barrel of a potentially historic storm, is what happens for these people both now and in the long term. The goal of making things less bad, rather than good, is not an easy thing to sell. But that's the reality right now for Seattle’s elected officials.