A solution for Seattle's homeless: Bring Hooverville back 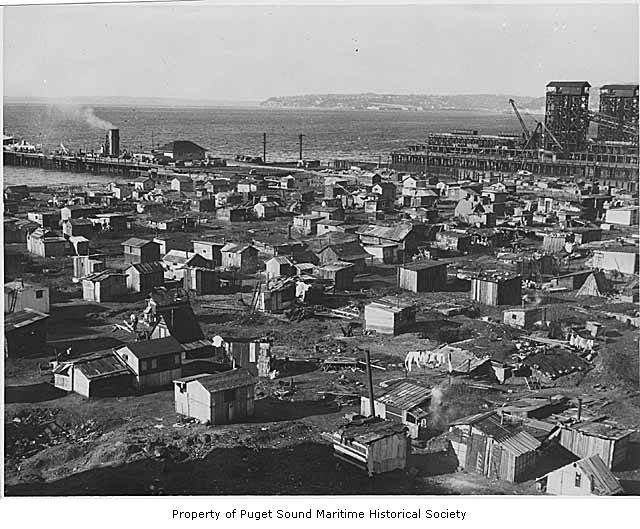 With the debate raging over how best to deal with homeless encampments in the Seattle region, and no consensus on how to deal with the declared emergency, perhaps it’s time to reconsider something that once worked in a crisis: Hooverville.

Once upon tough economic times, during the Great Depression, encampments of the unemployed popped up all over America. They were called Hoovervilles, after President Herbert Hoover, who was a blamed for the economic downturn that produced massive unemployment.

In Seattle, a shanty city rose on nine acres of Seattle Port of Commission land in what is now SoDo, at the site of a former shipyard. The encampment was built by the homeless with scraps scavenged from the waterfront. It was semi-sanctioned by the city, which allowed, or tolerated, its existence, at least after officials failed to permanently destroy it. The first Hooverville was burned down by the Seattle police, but the men living there — and they were mostly men, though were derided as human “driftwood” — quickly rebuilt it.

It was an economic refugee crisis. The main Hooverville grew to house about 1,200 people in its shanties. They were mostly middle-aged white men without much education, unemployed laborers whose timber, fishing, mining and construction jobs had gone kaput. But it was also an integrated gathering, a racial and ethnic melting unlike much of the rest of segregated Seattle. Order was kept by a multicultural vigilance committee consisting of two whites, two African Americans, and two Filipinos. Observers called it a “city within a city.”

Other Hoovervilles popped up too, near today’s Waterfront Park, on Beacon Hill, and dotted around the Industrial area. In 1935, it was estimated that between 4,000 and 5,000 otherwise homeless people were housed this way citywide. That is an interesting number. The 2016 one-night homeless count estimated the current, one-night unsheltered population in King County is around 4,500 souls. In other words, we have about the same number of unsheltered homeless people on county streets on a given night as Seattle housed in Hoovervilles during the Great Depression.

The economic times are different now, of course. In the years that Hooverville flourished, 1931-41, there was massive unemployment. Seattle was growing virtually not at all. During that decade, the total growth of the city was flatlined at 1 percent.

Today, we have produced the homeless crises in part because our current economic engine churns out wildly disproportionate prosperity in the wake of the Great Recession. We’re seeing job growth at the bottom end of the economic scale (50 percent of median income) and at the very top end (180 percent of median income), but little action in between. At the same time, due to massive growth and development, we’ve seen rising rents and massive displacement. And we’ve frayed and cut social safety nets; we’ve dumped the mentally ill onto the streets.

Does a boomtown need a Hooverville? In this economy, it might.

We’ve tried Tent Cities and Nickelsvilles — similar experiments but on much smaller scales. There are folks on their own under freeways and in the greenbelts. The Jungle is a longtime, imperfect Hooverville-ish fixture wedged under a freeway. Now, the city council is considering allowing street camping on sidewalks in industrial zones or in parks and green spaces citywide.

But the sanctioned tent and shanty settlements are too small to meet the need, and dispersing people to fend for themselves can create difficulties in ensuring access to services, and it can make keeping order a challenge. Opening areas like Seward or Schmitz Park to camping could threaten our last remnants of old growth forest and the millions of dollars and man-hours spent on habitat restoration.

Still, there are spaces that can serve a humanitarian purpose. Finding chunks of acreage for several large settlements would be a challenge. But stepping up to that might do a number of positive things. First, if suitable undeveloped property cannot be found — and it is certainly not as available as it was in the 1930s — the city could condemn and buy land, perhaps under-utilized industrial property, for this purpose. Expensive, yes, but settling the unsheltered homeless into the city’s cracks and crevices does not make a statement that bold immediate action is needed at the right scale.

We could ask the region’s flourishing business sector to help pay for land. Amazon is generating thousands of high-paying jobs — a good thing — but there are also negative consequences that need to be mitigated. Paul Allen once stepped up to offer the city the chance at land for a large Commons in South Lake Union. Could we work out a similar public-private partnership for homeless villages? Could we create a kind of Public Development Authority for Hoovervilles that could coordinate funding and services, and be ruled by residents and stakeholders?

Perhaps we could follow the Depression-era model, with one central homeless “city” and a number of satellite ones. It would buy time until more permanent housing is built or acquired. Another idea comes from Sinan Demirel, a homelessness activist and scholar who has studied the history of the phenomenon in Seattle and written about it for Crosscut. In comparison to homeless encampments of 1,000 or more, he says, “several geographically dispersed villages of 100-150 would be more manageable and able to integrate into neighborhoods rather than becoming an isolated ghetto.”

He cites research that suggests the optimal size for human communities is around 150 people. This would be half again as large as a Nickelsville or Tent Cities 3 & 4, he says. In other words, instead of a “city within a city,” the new Hoovervilles would be villages within the city.

Unlike the original Hoovervilles, the modern ones could be better planned with more efficient layouts, micro houses, sanitation, utilities and technology. The original was a self-built community, much like the shanty towns and slums that have proliferated across the globe as part of urban concentration. Ours could combine the traits of both homemade and state-of-the-art features. They would have to be family friendly as well.

“These villages,” says Demirel, “could be more than a mere stop-gap measure.” The new Hoovervilles “could become more permanent experiments in alternative models of housing that challenge us to consider new notions of home and community and the kind of footprint we leave on earth.”

That might well appeal to local ego as well as tap into the ‘innovator’ mentality that is driving much of our new economy. The new Hoovervilles could become an incubator of urban living in the 21st century.

The main Hooverville was destroyed in 1941 as Seattle ramped up, along with the nation, for World War II. America started hiring again for the defense effort, and some of the Hoovervilleites, while too old for the military, could become part of the home front work force while younger men went to fight.

The war helped end the Great Depression. It did not end homelessness, however. It’s clear now that the problems of housing have become long-term and systemic.

The idea isn’t to give birth to new permanent slums, but rather learning better how to help our fellow citizens in a time of extraordinary need, a time when we should not let the perfect be the enemy of meeting a growing challenge. On top of that, if we can learn lessons that will benefit us all in finding ways to live more sustainably in a world where we’re balancing self-reliance and mutual support in new proportions, we could all be better for it.