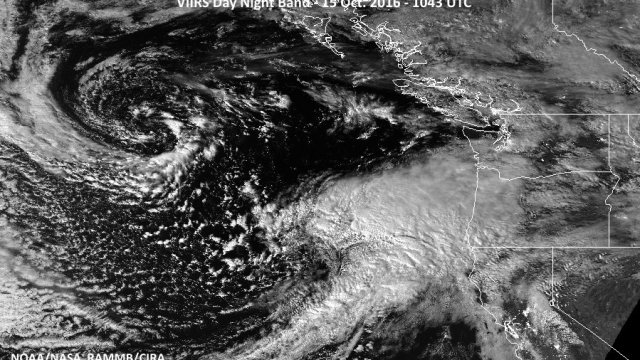 “This is a very dangerous storm,” the warning read in boldface font. At this point local meteorological celeb Cliff Mass’s post is infamous. His descriptors — “a true monster,” “unbelievably strong,” “massive power outages and damage” — became the talk of the town last week, as everyone did emergency grocery shopping and got ready to hunker down and watch the doomsday scenarios play out on the other side of their windows.

Of course, we all know the final outcome: It was the stormpocalypse that wasn’t, largely because, instead of hitting us head-on in Seattle, it’s path tracked over the unpopulated ocean instead.

It so happened that the Monday after the “storm” the New York Times Magazine published a piece in which Mass himself served as the central character in the quest for better forecasting technologies. The timing of the publication with Seattle’s weather was a fluke (it was prompted by Hurricane Matthew). Nevertheless, one could say the argument Mass presents in it, that U.S. weather forecasting is behind, was ironically exemplified by his own forecasting of our local storm.

Is the fact that Mass’s alarmist forecast of weather “potentially as strong as the most powerful storm in NW history” didn’t pan out a case study in his very own argument?

In some respects, yes. But, paradoxically, the trumped-up portrayal of the storm that ran rampant was a product of the exact opposite, too: a misfire that happened because of the ways in which our local weather forecasting has improved.

What? Let me back up a little.

Weather forecasts are the definition of quotidian and, as such, we might expect them to be simple. But in a visit to Mass's office this week, he painted a different picture.

After Mass recounted the play-by-play of how the storm forecasting went down, showing me the series of weather animations on his office computer in the utilitarian-looking Atmospheric Science and Geophysics building on the University of Washington campus, it quickly became clear that predicting the weather is still really complicated — and, as you might have gathered, still hugely prone to error.

Locally, we’ve made progress even in the last couple of decades in terms of being able to see weather that’s coming further into the future. The problem is, the longer-range the forecast, the more prone it is to being wrong.

Your daily forecast begins with a suite of data points including atmospheric pressure, temperature, humidity, wind speed and direction that are collected from numerous places around the world from weather stations, ships, airplanes and satellites. Once collected, that data is distributed to supercomputing centers that run models based on equations that describe atmospheric dynamics (anyone else have a vague recollection of learning about Navier-Stokes?).

After the models are run, the outcomes are put into the hands of the local forecasters, who then interpret them for you and me. Of course, what they tell us isn’t always right. There are two main sources of error: the uncertainty in the initial conditions — that suite of data that gets plugged into the model — and uncertainty in how the physics actually play out.

As a complex system, the atmosphere is prone to chaotic behavior, defined by Edward Lorenz, the pioneer of chaos theory, as “when the present determines the future, but the approximate present does not approximately determine the future.” Meaning, how the weather plays out tomorrow depends on what’s happening right now, but if we only sort of know what’s happening right now, our estimate of tomorrow’s weather could be way off.

This is why one of Mass’s main critiques of U.S. meteorology is that we need more supercomputers so that we can run more models, because the more models we run, each with slightly different starting conditions and physics, the better able we’ll be able to hone in on what’s actually likely to happen (of course, supercomputers come with a much heftier price tag than your average MacBook Pro).

So, how exactly has weather forecasting gotten better in the Pacific Northwest? A few decades ago, we didn’t have a great way to get that suite of initial conditions over the Pacific Ocean: maybe a ship or buoy here and there, but we didn’t have nearly the number of measurements we could get on land. Now, however, we’ve got satellites. “We have massive amounts of observations over the Pacific Ocean. All the satellites are filling the gaps in,” Mass told me. This satellite data is why forecasters, Mass included, were able to give us a forecast days ahead of time at all — even if giving a forecast that far ahead of time meant there was a higher chance that the forecast would change.

The forecast for the famous Columbus Day storm that Mass compared last weekend’s storm to in his initial blog post didn’t come out until a day before the storm hit. “If you go back before 1990, we didn’t forecast any of the windstorms right—any of them,” Mass said. This time, “we knew there was a storm there. We were just off by 60 miles.”

In the end, we did get the about amount of rain that was forecasted, and the storm was as intense as predicted; a fact that Mass clearly took some pride in, despite the moderate kerfuffle in which he has been embroiled after the anticlimax. But because the storm changed direction, the biggest gusts of wind we got in the city were about 10 miles per hour weaker than expected (and since wind power increases with a square of the wind speed, that’s actually a notable difference).

That 60-mile difference felt like a big let down to those of us in Seattle who were braced — even excited — for some major weather. “To a certain extent, I have to admit it’s an embarrassment when you cry wolf and it doesn’t happen,” Nick Bond, a University of Washington research meteorologist, told me by phone.

To his credit, Mass did continually update his blog as the storm got closer and its path and intensity became clearer. The problem is once you sound the alarm bells, it’s really hard to un-ring them.

Mass says there are other ways that we could improve our local weather forecasting, most notably, with a radar system off the Oregon coast. In 2011 Washington got a radar station on Camano Island, which Mass says provided a very clear position of the storm once it traveled off our coasts — but at that point, it was only a few hours away. Before that, the weather system was in a relative blind spot.

“Our windstorms come in from the south. If we had a radar here—“ Mass said, pointing to the Oregon coast on the weather animation on his computer screen, “I would have known the track well. So then a few hours into the day on Saturday, we could’ve said, ‘OK guys, forget it.’”

Mass seemed somewhat flummoxed by the public reaction to the fact that the weather didn’t live up to the hype. His general response was that this was an error in his communication about the uncertainties involved in predicting the weather. “Forecasting is never certain,” he said. “It should always be given in terms of probabilities, really.”

Of course, probabilities are a lot less sexy than the “storm of the century.”

But weather forecasting isn’t only about how we should plan our own days; it’s a matter of public safety. If a forecaster sees a potentially powerful storm, but olds back for fear of overhyping, what is the cost in terms of not giving people the chance to be prepared? When Hurricane Matthew proved bigger than predicted, it caught residents in Haiti unawares. More than 1,000 people died.

As a weather-lover, Mass can understand the disappointment that it turned out Seattle’s recent storm wasn’t one for the books. “People love this stuff. They go out to see the big waves, the big winds, this force that’s bigger than them,” Mass said, leaning back in his swivel chair. “I really think there’s something basic, fundamental, about experiencing intense weather.”

Maybe this storm turned out to just be a test run — but maybe that’s just fine. I haven’t seen the forecast yet, but the evidence suggests that there will be more turbulent weather to come in our futures.