“Digital prophet” or con man? Shingy is in Seattle 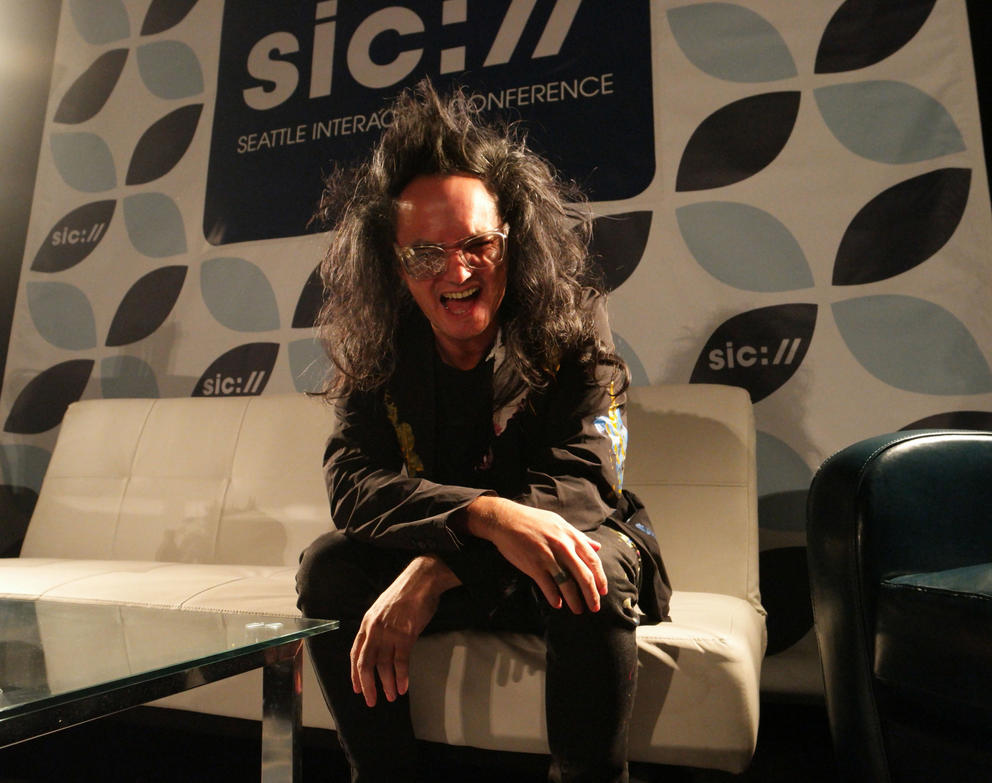 David "Shingy" Shing, who has been a marketer and "digital prophet" at AOL for almost a decade.

David “Shingy” Shing is America Online's Digital Prophet (yes that’s his real title) and he’s back in town this week for the Seattle Interactive Conference, where he served as keynote speaker last year. You may have seen his leering visage – the one of a wild-haired guy biting into his necklace and clenching his eyes shut behind enormous glasses – cropping up on posters all over the city.

Shingy is essentially an advertising exec skilled at buzzwords, and represents the worst excesses of the tech industry. So with his third appearance in five years at Seattle’s premier tech confab, it’s time to ask: why do conference organizers keep booking this guy?

For the uninitiated, Shingy is an Australian marketing savant/con artist who has convinced AOL – which still exists, relying on its 2.2 million dialup subscribers who never got the memo – that the dinosaur company can remain relevant in the 21st century by paying him a six-figure salary for bite-sized insights of utter inanity. For example, a deliciously deadpan New Yorker profile relates a visual “metaphor” he shared with an AOL exec: "a cartoon he had drawn of a bear wearing zebra-print pants and a shirt covered in ones and zeros." (He has been roundly skewered many other places.)

Why do I have such a visceral aversion to this man? A year ago, I was sent to Tel Aviv to attend a symposium on civic engagement in municipal government. At the symposium, I had the great misfortune of sitting in the audience next to Shingy, who told the New Yorker that his job is to “fly all around the world and go to conferences.”

Wearing hair spiked with nausea-inducing gel, a black blazer and jeans artfully decorated with matching paint streaks, I had to wonder: Who was this guy? Before I knew it, he bounded onstage to deliver the keynote address, just as he will at the Seattle Interactive Conference this year, yet again.

I was ready for the daylong Tel Aviv City Summit to tackle tough issues, such as the economic protests that had racked Israel and created Tel Aviv’s version of the Occupy movement. Shingy wanted to talk about brands.

And that’s the chief problem with Shingy and the mindset he represents. The manufactured edgy look notwithstanding, at the end of the day Shingy is not a tech guru. He’s an advertising exec — and a boring one at that, as tech columnist David Holmes rightly pointed out. He wants to sell us stuff we don’t need, not improve the world and people’s everyday lives, as tech should aim to do at the end of the day.

“I bring people to brands and brands to people,” he said in Tel Aviv. “I think cities are just like brands.”

That was about as much effort as he could muster to connect his hyperactive, routine presentation on digital marketing with the topic du jour. Following that, I learned that ADHD should be rebranded to stand for “always distracted hyper doer.”

Other Zen koans from the Shingy book of proverbs included, “Social is a great place but it’s always about love that rules over hate,” and “That’s the new new, is peer to peer.”

On storytelling: “Everyone has stories, they just have to stop telling. It's more about the story, no doubt.”

Last year, I reported on the burgeoning tech scene in Nairobi. It’s home to the usual startup cast of serial entrepreneurs and hardcore coders, but their work is such a refreshing change of pace from the U.S. tech industry. They are using digital technology to enhance the lives of some of the world’s poorest people – helping market vendors buy bulk produce via text message, for example, or inventing a durable portable router for use in rural villages.

As one Nairobi-based entrepreneur told me, “Silicon Valley is about efficiencies, like how to get your dry cleaning delivered faster. Nairobi is about solving real-life challenges.”

Despite being home base for PATH, the Gates Foundation, and the vitally important public health work they do, Seattle seems far more inclined to go in the efficient dry cleaning direction. After all, our tech industry titan, Amazon, has built a business model of shaving seconds off the delivery time for the mountains of junk they ship.

There are far more inspiring and relevant local faces on the Seattle Interactive Conference speaker roster than Shingy, who is quickly becoming the event’s mascot if the promotional posters are any indication. Take Wyking Garrett, whose vision of Africatown (think Chinatown for African-Americans) as a heritage destination in the Central District is unique across the whole country. The idea has gotten real buy-in from City Hall with the establishment of the Central Area Arts and Cultural District, while embracing Seattle’s tech-driven economy through connections with the Blackdot coworking space and the Hack the CD collective, which seeks to empower neighborhood residents through tech entrepreneurship.

Other names reflect Seattle institutions to be proud of, not some aging, Manhattan-based Fortune 500 company like AOL. Jane Mauser heads up marketing for outdoor manufacturer Mountain Safety Research, whose innovative designs for everything from water filters to self-inflating mattresses are battle-tested in our backyard of the Cascades and Puget Sound. Greg Vandy will be on-hand from KEXP, whose listener-funded station offers a glimpse of brand loyalty that AOL could only dream of.

Instead, it’s Shingy’s face that has been mocking us from every lamppost for the last month.

All the more reason to dump this huckster and heap the scorn on him that he deserves. Seattle’s tech community can and should do much better.