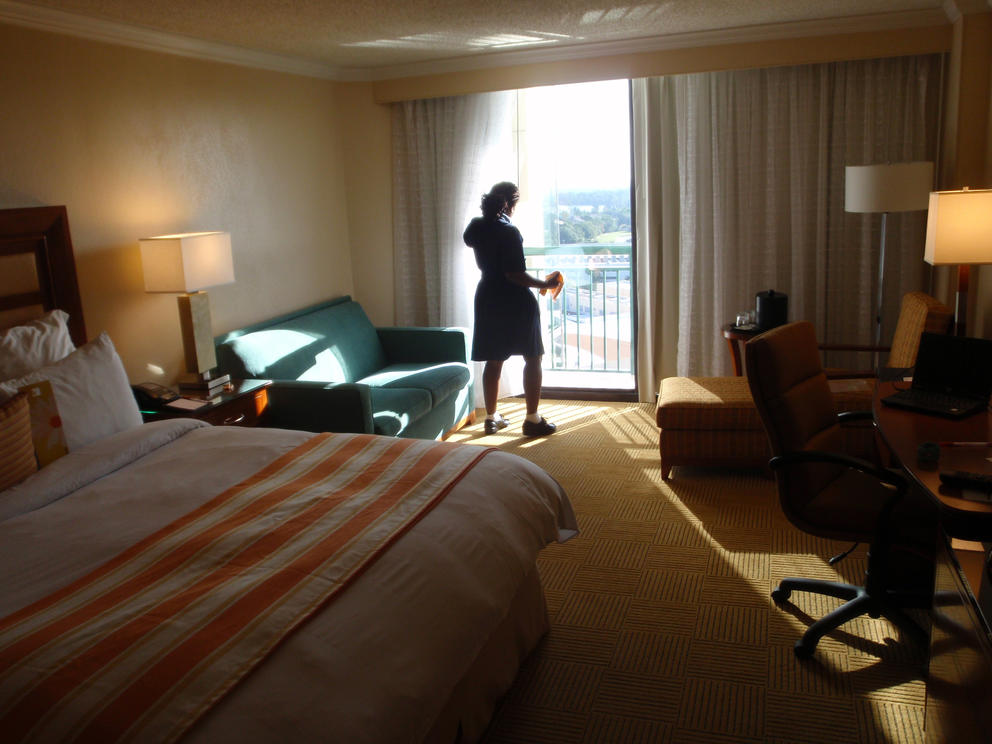 Cleaning hotel rooms is a lot of work. It means lifting hundreds of pounds of clean and dirty linens and raising up heavy mattresses dozens of times over the course of a shift. Lifting, bending, scrubbing, dusting, hauling trash, and all the other tasks behind a fresh clean hotel room can take a toll on your body — including causing repetitive-stress injuries.

And that’s just the physical labor.

“I love my job. I like to take care of people,” says Ida Calderon, who works in room service in a local hotel. But that doesn’t mean she hasn’t been put in uncomfortable situations at work.

She lists off the most dramatic — the time a guest called and asked her to put on a French maid outfit and bring shots of vodka up to his room (she declined), or when a man opened his room door “stark naked.” Or the time a guest suffering a mental-health crisis called for room service, and then answered the door wearing just a blanket around his waist, having turned off all the lights and stacked up all the furniture in the room.

“You have to walk past this person to go put the tray down, and hope to God you’re getting back out of that room without him closing that door,” Calderon says. And while she has generally felt comfortable reporting to her manager when something happens, she knows that, in similar situations, not everyone is.

Experiences like these, along with housekeepers’ injuries and heavy workloads, are the reason local hotel workers and their union (UNITE HERE Local 8) are backing Initiative 124 in Seattle. I-124, appearing on Seattle’s November ballot, would implement a host of workplace safety, workload and job-security provisions for workers in the hotel industry.

But according to the state’s hotel industry trade group, I-124 is a “poorly written” power grab by unions that will create more problems than it solves.

Jillian Henze, spokesperson for the Washington Hospitality Association, says by email that the initiative was drafted “with the specific goal of putting burdensome regulations on hotels, most of which can be negotiated away by unions in bargaining.”

Maria Estrada had been cleaning hotel rooms for a few years when she started having pain in her hands.

“My hands would fall asleep and tingle; I had muscle cramps,” she says through a translator. She went to a doctor, who told her she had carpal tunnel syndrome and would require surgery on her right hand to treat the pain and numbness. She went ahead and had the surgery. In another year, she needed surgery again, now on her left hand. She had to fight to get the medical care covered as an on-the-job injury; recovery meant three months off work, with only part of her pay covered by workers’ compensation.

“I thank God that I can still work,” Estrada says now, six years after her last surgery. She knows other hotel workers who have had those same surgeries over and over, as they keep reinjuring their hands.

To address issues like this, I-124 would include new limits on how much hotel employees can clean per shift (5,000 square feet) and require extra pay for work above the limit.

“It’s a really hard job,” says Jianhua Wu, who works as a room attendant. (All the hotel workers I spoke to were happy to speak on the record, but declined to publicly identify their employers.) Wu is expected to clean 15 rooms in an eight-hour shift, the workload cap in her union contract. Even with a 15-room cap, says Wu, “Every day, a lot of people cannot finish [all their rooms]… We have a union, and still, people get injured every year.”

She can’t understand how non-union hotel employees, whose workloads can be much larger than hers, get through all the rooms they’re expected to clean each shift. Both Wu and Estrada say they see coworkers skip rest and meal breaks to get all their work done.

Estrada reports that a coworker recently fainted at work after skipping lunch to finish all her rooms.

But a workload limit is just one component of I-124. The part that’s been grabbing more headlines is I-124’s rules around sexual harassment and assault prevention.

Following the lead of New York City’s hotels, the initiative requires that employees who work alone in guest rooms be provided a panic button, so they can quickly call for help in an emergency. It also requires notices in hotel rooms that alert guests to the fact housekeepers and other employees are equipped with panic buttons, and are protected by law from assault and harassment.

Employees who reported incidents with guests would be allowed to work in other parts of the hotel during that guest’s stay, and to take time off to report any criminal conduct to the police.

Under I-124, a hotel “must record the accusations it receives that a guest has committed an act of violence, including assault, sexual assault, or sexual harassment towards an employee.” If a guest on that list returns for a stay, management must alert staff.

If an employee reports an incident of assault, sexual assault or sexual harassment, and the accusation is supported by “a statement made under penalty of perjury or other evidence,” the hotel is expected to refuse service to the offending guest for a period of three years.

The goal is to deter assaults and protect staff from repeat offenders. But the hotel industry is especially concerned about this section of the initiative.

Those provisions create “serious due process violations that force hotels to serve as judge and jury after reports of sexual assault or harassment and blacklist guests without giving them a way to clear their names,” according to Henze, the hospitality association spokesperson.

Hotels have “many systems in place” to protect workers on the job, says Henze, including “safety alert and radio systems” that are either in place or soon-to-be-implemented in most hotels, as well as the instruction to work in pairs and not clean rooms where guests are present.

The Washington Hospitality Association supports safety alert systems and “posting of safety expectations” on guest-room doors, as well as what Henze terms “safe workloads.” But overall, they oppose guest “blacklists,” the use of square footage as the measure of a safe workload, and the lack of safety training in the initiative.

They also, as is common in these labor-versus-business disputes, oppose the provision that says unions can negotiate contracts that don’t entirely comply with I-124 if the union membership votes to do so. While the assault and harassment section would stand, other components could be subject to different collective bargaining agreements.

“If this initiative is so great,” she asks, “why would UNITE HERE want to give hotels the option to not comply with the law?”

Heather Weiner, spokesperson for the Yes on I-124 campaign, brushes that aside, calling the union provision “boilerplate language” that gives employers and unions flexibility. Similar language has been included in some of the region’s most progressive labor laws, she says, including Seattle’s brand-new "secure scheduling" law.

Along with workload limits and safety measures, I-124 also adds new standards for the cost and quality of workers’ health insurance, and requires hotels to keep regular staff on for a period of time when a hotel is sold to a new owner.

According to Weiner, the initiative came directly out of what union organizers were hearing from hotel workers about their working conditions. The specifics of the law, she says, relate to the specifics of work in the industry.

“There’s no other industry that I can think of where a woman is in an isolated situation with only one exit and one entrance, in narrow confines, with no one else in the room, no cameras and no way to call for help,” Weiner says.

She adds that this is a low-income industry staffed primarily by women, and women of color and immigrants in particular. “This is absolutely a gender issue,” she says.

For her part, Estrada has heard hotel owners say workers are already protected and don’t need I-124. But, she says, “They’re not the ones in the rooms.” Calderon, who works in room service, calls it “a straight lie” to say that hotel workers aren’t going into closed-door rooms with guests. The very nature of her job means entering guests’ rooms alone, closing the door, delivering food and drinks, and making sure guests are happy with the service.

Wu argues that the workplace protections she has now are the result of existing labor laws. “I know for us, the lunch break is 30 minutes. This is by the law. That’s why the manager has to follow [it].” If I-124 passes, she says, there would be even more provisions in the law protecting her time, her body, and her job.