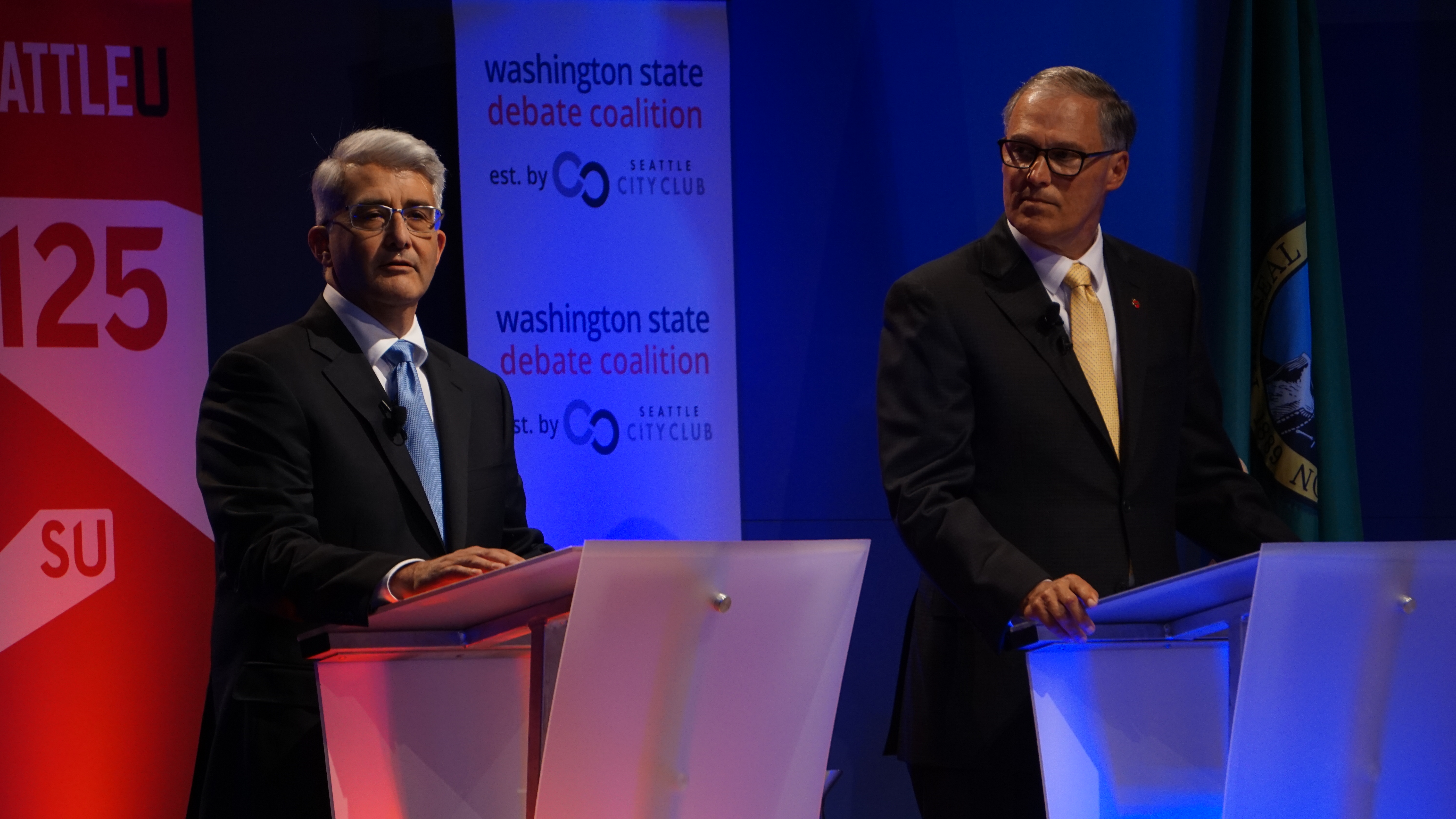 Bill Bryant, left, and Jay Inslee at a September debate.

You can ask the same question about Washington state’s gubernatorial contest that Hillary Clinton often asks in the presidential contest: Why isn’t the seasoned Democrat leading by a much wider margin?

Why isn’t the experienced former secretary of state 50 points ahead of the irascible, flighty Donald Trump? Similarly, in a booming economy in a heavily Democratic year, in an increasingly Democratic state, why isn’t incumbent Democrat Jay Inslee, say, 20 points ahead of Republican Bill Bryant?

That’s easy. Inslee, who is perhaps 10 points ahead in the polls, is not the most commanding leader Washington has ever had — as evidenced in a statewide debate Wednesday night in Pasco aired on KCTS 9 and co-moderated by KCTS 9’s Enrique Cerna.

Inslee has presided over notable leadership flops, which Bryant eagerly highlighted throughout the debate. “I want to be an activist governor,’’ he said repeatedly. Obviously, he considers the current governor a lackluster one. Bryant, pointedly, railed against Inslee for delaying more substantial action on education funding year after year.

Asked at one point whether Washington needs a homeless czar, Bryant, who looked frustrated much of the evening, said: “We don’t need a homelessness czar, we need a governor."

But the economy in parts of the state is the best it has been in years, and Inslee is riding that wave. The Seattle area’s jobless rate dipped below 4 percent for the first time since 2008, according to figures announced Wednesday.

The governor made repeated references to Washington’s red-hot economy — bragging that on his watch the state had created 250,000 jobs, thousands even in the last month.

To every punch from feisty Bryant, Inslee had a program or spending example to tout. Billions into a transportation package to ease traffic woes, billions into education, improving high school graduation rates, all-day kindergarten, smaller class sizes and efforts to retain new teachers who “teach a few years and then go to work for Amazon.’’

The two candidates disagree on a statewide ballot initiative to raise the minimum wage over time to $13.50 an hour; Inslee is for it, Bryant against. They disagree on Inslee’s moratorium on the death penalty, which Inslee pledged to continue and Bryant apparently would not.

Debate 101 calls for a challenger to portray a problem only he can solve.

Bryant attempted to do that, but it was tougher than it looked. The state is not in any deep trough. Yes, we have mind-numbing traffic throughout the Puget Sound region and significant education funding problems. But all in all, things are going pretty well.

At the end of the debate, Bryant asked voters how things would change if they re-elect his opponent. That question was no match for the optimistic Inslee, who is preternaturally upbeat about Washington’s future, especially its sunny economy.

We all know another pressing truth: Inslee and Clinton both might be further ahead if their opponents hadn’t raised so many reasonable doubts about them.