Watch Inslee and Bryant in their final debate 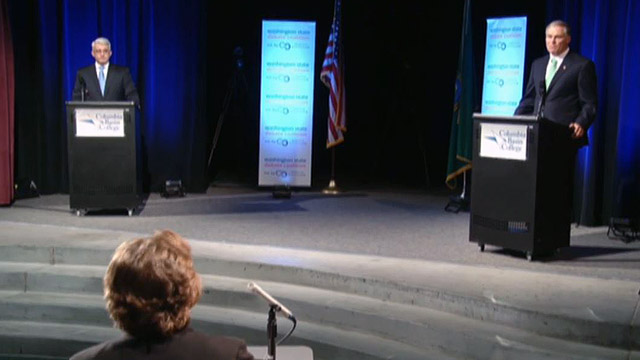 With the election just under three weeks away, the candidates for governor were in Pasco Wednesday for a crucial debate tonight.

The debate, organized by a statewide coalition of civic groups and media, provided a major chance for Republican challenger Bill Bryant to make his case for new leadership in Olympia an argument that has played on a general sense of discontent with the performance of state government. But his criticisms of the Inslee administration as incompetent have failed to gain much obvious traction, at least through much of the campaign. Gov. Jay Inslee is campaigning on improvements to school funding, successful passage of a bipartisan transportation funding package and job growth.

Inslee is seeking his second term as governor, having won the office in a tough 2012 contest with former Republican state Attorney General Rob McKenna. The 65-year-old Democrat graduated from the University of Washington before earning a law degree from Oregon's Willamette University School of Law. He began a law practice in Selah, just north of Yakima, and served as city prosecutor and later as a member of the Washington State House of Representatives. He was elected  to Congress from both an Eastern Washington district for a single term (1993–1995) and a Puget Sound area district, where he servedfrom 1999 until 2012.

Former Port of Seattle Commissioner Bill Bryant is trying to become the first Republican governor since John Spellman left office in 1985. Bryant, 56, actually served in Spellman’s administration as director of the governor’s international trade council. Like Inslee, he also has an Eastern Washington background, having worked in Yakima on the export of agricultural products following his employment in Spellman's administration. He moved to Seattle and founded BCI, an agricultural exports enterprise that he grew from a basement office in 1992 to a firm employing 35 people today.