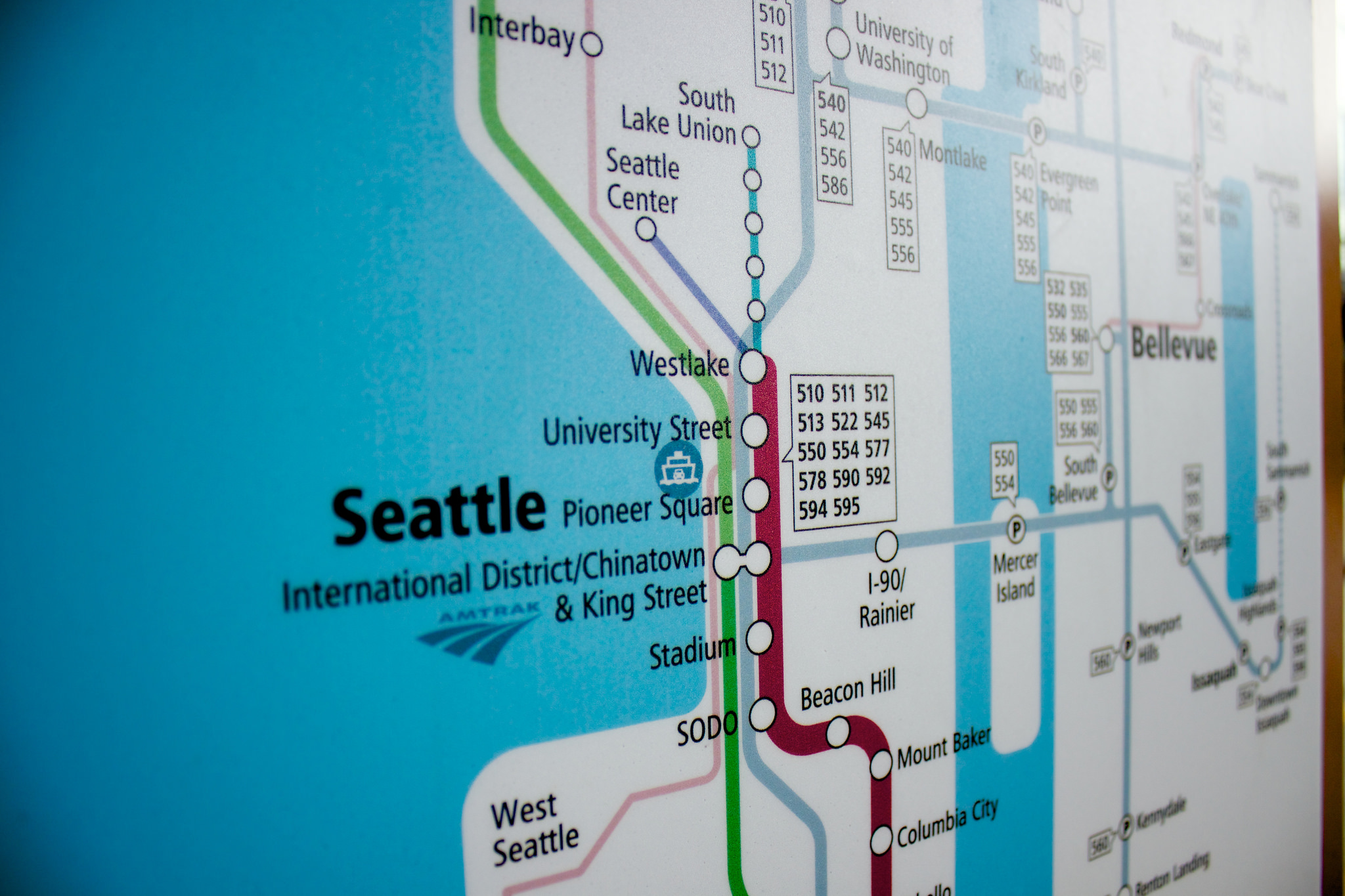 This is the second in a multi-part series on Sound Transit 3. Read part 1 here.

In the Central Puget Sound, a monster is lumbering toward the ballot box. Proposition 1, the initiative that would greenlight the regional transit agency’s new Sound Transit 3 plan, is heavy and hungry. With 62 miles of new light rail, ST3 would complete what would likely be the longest stretch of downtown–suburb rapid transit in the United States, while also expanding bus rapid transit and commuter rail service.

Proposition 1 is, in every sense of the word, an investment. The project comes with a far-reaching timeline, a lot of moving parts and a $54-billion price tag. The question for voters, then, is whether this investment is worth their ‘yes’ votes. That is, do the benefits exceed the costs?

Wrapping one’s head around these costs and benefits is easier said than done. There are innumerable yardsticks for measuring ST3, and advocates and opponents cling appropriately to the metrics that best reinforce their points of view.

If you care about jobs, goes the logic, then you should care about ST3. (The WSLC endorses ST3 and financially supports the campaign to pass the initiative, called Mass Transit Now.)

Environmentalists, on the other hand, tout the plan’s potential to reduce the region’s greenhouse gas emissions. Sound Transit projects that the ST3 projects will reduce the distance traveled by automobiles by 362 million miles annually by 2040. The result: a reduction of 130,000 metric tons of carbon each year, equivalent to the carbon emissions from powering 19,000 homes' electricity use.

Transit enthusiasts point to the agency’s projection that ST3 will result in at least 19 million new transit riders annually and a savings of at least 16 million hours annually between new and existing riders.

But to turn the page back to costs and benefits: Is the cost of the package worth this level of job growth? Is it worth its time-savings projections, its environmental benefits, its predicted impact on traffic congestion?

As Seattle Transit Blog has pointed out, the “easiest value to understand” when considering ST3 is the cost-per-individual estimate. According to Sound Transit, the package will cost the median adult in the region an extra $169 annually. That’s about $14 a month.

We can work with that. For now, ignore the money that the federal government is chipping in, as well as the money Sound Transit will raise from selling bonds and collecting fares and interest. Just pretend, for the sake of this exercise, that voters are the only ones paying for the plan. (They’re only paying for half of it, but for now we’re trying to center what the taxpayer sees.)

With all the relevant caveats — voters aren’t paying for the project up front, we don’t know what the actual rate of inflation will be, Sound Transit will continue to collect tax revenue for several years after construction is complete, etc. — let’s play with a relatively unscientific, slightly conservative $7,000 median cost-per-individual for the whole shebang.

Sound Transit reports that there were 390,600 transit trips daily region-wide in 2014 across all agencies and transit services. Without ST3, the agency predicts that number will rise to between 601,000 and 725,000 daily trips by 2040, given the region’s growth trends and previous transit investments. With ST3, it predicts between 657,000 and 797,000 daily trips. Taking the lowball estimates, that’s at least 56,000 new daily transit trips attributable to ST3.

As opponents of the plan point out, if most of those trips are made by people commuting to and from work — two trips per day — that means the number of new daily riders is around 28,000. If, by that year, you’re a voter who paid $7,000 for the whole shebang, that means you chipped in about 25 cents for every new daily transit rider; say, a pleasant Kindle-reader who’s no longer jamming his hand or face into a horn while clogging a freeway each day.

For each taxpayer, that’s a penny per year per new rider. Input and outcome; cost and benefit.

Kind of. Who are these riders? Do they live in the region yet? Are they switching from cars and burning their vehicles? Are they born on transit systems; raised by the ‘do not hang by the door’ cartoon monkey light-rail decals? It’s one of the most difficult nuts for forecasters to crack, which means new transit riders are best framed in relative terms.

There’s a certain fill-in logic at play here: Some people will graduate from buses to trains, some will move to the region from elsewhere and go straight to transit, some will indeed ditch their cars. As Sound Transit acknowledges, “most new rail riders are people who are shifting from buses.” A kernel of truth remains, though: If you’re a new transit rider, you’re not in a car.

But. Leaving the intricacies of ridership aside, voters aren’t just paying for new riders. That unscientific $7,000 is also indirectly purchasing the 200,000 job opportunities cited by Johnson — at a cost of 3 cents per job per taxpayer (if we ignored the riders and viewed taxpayers as only purchasing jobs).

And. Then there are the non-human and intermediate outcomes: For the $7,000 spread across those 25 years, voters do get the new riders and the jobs, but they also get the shiny buildings, the parking facilities, the projected greenhouse gas emissions reductions — you get the picture. Whether this is a rosy or grim (or journalistically fair) outlook will depend on the individual voter.

There are plenty of other ways to spin the numbers. Mark Ahlers, a smart-transit advocate and creator of the website SoundTransitRevealed.com, calculates that, with respect to the Sounder commuter rail extension to DuPont, ST3 capital costs could be as high as $485,600 per daily round-trip rider. The costs are so astronomical, he told Crosscut, “it would be cheaper to buy each commuter a house near where they work.”

Note that this number is oranges compared to the 25-cent apples above: It’s a statement about round trips, total (not annual, not just taxpayer-fronted) costs, and a specific, low-density section of track. The caveats don’t make the number less real, but they do make it a different beast. The point is that neither 25 cents nor $485,600 is a particularly honest way of describing the nebulous thing we call cost-per-rider. Everyone cherrypicks to make a point.

Let’s zoom the lens out, then, and try to position ST3 within a larger context: that of the region’s transportation plan. (We do have one of those!)

The Puget Sound Regional Council’s Transportation 2040 plan, adopted in 2010, estimates that by 2040 the population of the four-county area — the Sound Transit District plus Kitsap County — will grow to nearly 5 million people, a 36 percent increase over 2006. To justly serve that population, the plan says, we will need about $174 billion (2008 dollars) in transportation-infrastructure investment between 2010 and 2040. ST3 is a piece of that plan. It’s one leg of an arachnoid stool.

Which brings us to what might be the most relevant metric of all for voters: traffic.

If Transportation 2040 works out, daily per-person traffic congestion would drop by 40 percent, compared to a world without the plan. That's not to say that life on the roads would get better. Single-occupant car trips will continue to grow, but not as quickly as the population. And many more of us would have the option to opt out of the automobile: Transit, biking and walking rates would grow much faster under this scenario than they would otherwise. It’s a promising, if expensive picture.

Are there cheaper ways than ST3 to get to the same results — or to do even better? ST3's critics say so. But those alternatives are not on the ballot this year. Instead, we're being asked to decide between this particular package and, for an indeterminate amount of time, doing nothing. There is no protest-vote option.

Which leaves us with a question of trust. Since it must appeal to such a diverse swathe of voters, Proposition 1 is necessarily imperfect to all of them. But is it good enough for the region? Can voters trust the transit agency to make good use of their tax dollars?

Sounds like an excuse to dive into the ST3 finances and financial policies! See you in a couple days.

Next: The $54 billion question: Can we afford Sound Transit 3?