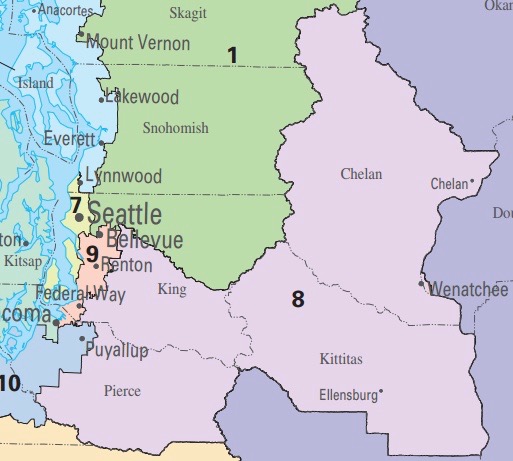 The 8th Congressional District takes in Chelan and Kittitas counties as well as eastern King and Pierce counties.

Dave Reichert is seeking a seventh term in Congress to representing Washington State’s 8th Congressional District, facing a challenger with widespread name recognition from a career in television.

Democrat Tony Ventrella, who mainly covered sports during his broadcast career and later became a motivational speaker, is running to unseat Reichert, who was first elected to the seat in 2004 after serving as King County sheriff.

Ventrella announced in April that was entering the race, saying he would not take money from a political action committee.

After redistricting in 2012, the 8th now straddles the west and east slopes of the Cascades, making it more conservative and voter-friendly for Reichert.

In interviews last week, both candidates spoke about their races and the issues.

Reichert Interview from KCTS 9 on Vimeo.

In our Vote 2016 interview, Reichert discussed his decision not to endorse Republican presidential nominee and the reaction he has received. Since the interview was recorded, and following controversy over a newly released recording of  Donald Trump that was made in 2005, the Republican member of Congress has publicly rescinded his statement that he would vote for Trump, saying, “Unfortunately with these comments, Donald Trump has lost my vote.” Read more here.

In July, Ventrella said he was ending his bid for Congress, citing personal reasons, and encouraged his supporters to get behind the other Democrats running in the primary. After finishing in the top two in the August primary, however, he decided to get back into the race. In the Vote 2016 interview about his unconventional bid, he said he still believes he has a chance to win the race.