How Seattle blew its chance at a subway system

A look back at the failed Forward Thrust initiative 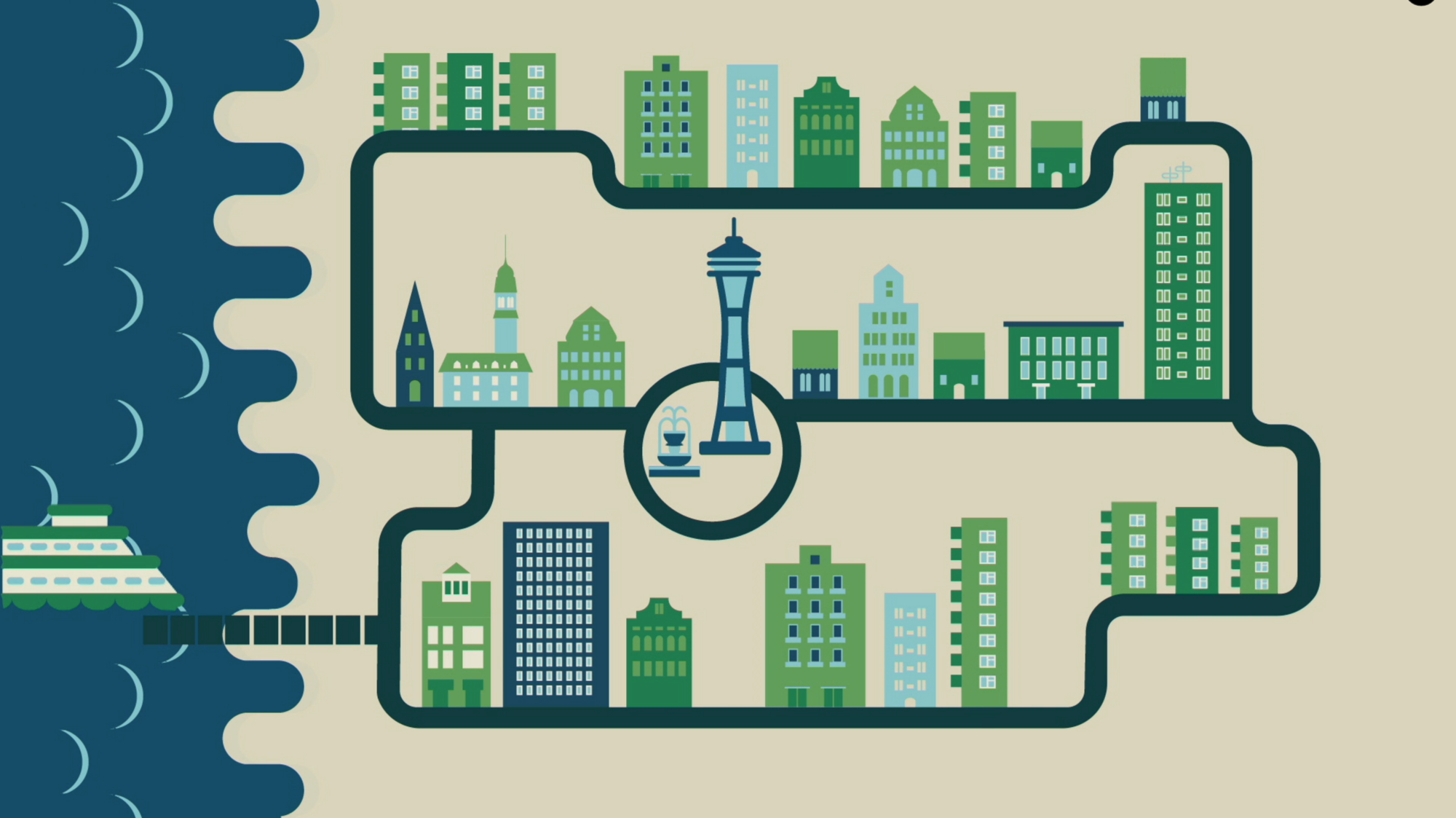 So said attorney and civic leader Jim Ellis, in a speech at the Seattle Rotary Club. As the region expands, “even a second freeway could not carry the traffic,” he predicted to the crowd of politicians, civic leaders and other Seattle movers and shakers. “Rapid transit is the essential link in a balanced transportation system, which is missing in Seattle.”

Ellis’s speech sounds like a pitch for Sound Transit 3 (ST3), the $54 billion proposal on the November ballot that would quintuple the size of the region’s light rail system over the next 25 years. But these statements were delivered Nov. 3, 1965. They served as Ellis’ public announcement of an ambitious vision to remake Seattle and King County with a dozen capital infrastructure projects, a package dubbed Forward Thrust.

A little over two years of planning and campaigning later, and Forward Thrust’s 12 propositions were put on the ballot as property tax measures for city and county voters. Seven measures passed. Rail transit was among those that failed.

This November, almost 51 years to the day after Ellis publicly outlined the critical role he saw for rail rapid transit in the region, voters will once again make a big decision about its fate. As they weigh the pros and cons of ST3, it’s instructive to look back at the Forward Thrust transit plan to understand what could’ve been.

Forward Thrust was, in many ways, a descendent of Seattle’s 1962 World’s Fair.

“It was sort of a chancy thing and it actually worked,” explains Bill Mullins, a historian who has written extensively about Forward Thrust, including its impact on local sports. “A lot of Seattle leaders gained confidence from that and looked around to what they could do next.”

Concerned about projections that 750,000 new people would move to King County in the second half of the century, and buoyed by his successful efforts to have voters fund Lake Washington’s clean up in 1958, Ellis began meeting with other civic leaders and politicians to sketch out the plans for what would become Forward Thrust.

The 1965 Rotary Club speech was Forward Thrust’s coming out. In 1966, it incorporated as a nonprofit organization funded by $100,000 in private donations. Ellis selected 24 organizing committee members to help lead the effort, including politicians, attorneys, businessmen, a professor, a labor union leader and others. The organizing committee in turn selected 200 people to help with the two years of planning, campaigning, press outreach and other work leading up to the vote.

“I was excited by the vision and the challenge,” says Richard Page, Forward Thrust’s Program Director. Page went on to lead King County Metro and later the Federal Transit Administration. “I was a young man at the time; 29 in 1966. I met a lot of smart leaders on the committee.”

From 1966 to 1968, the Forward Thrust committees crafted and campaigned for the capital projects.

Ellis saw all 12 as critical pieces of a healthy city and region, but the transit plan held a special place in his heart, saying, “Transportation has the greatest impact in shaping a productive and beautiful city.”

The Forward Thrust vision for transit was a 47-mile, 30-station rail rapid transit system with four lines running out of downtown to the corners of the city and across the lake to Bellevue, to be built by 1985. The measure would’ve also funded 90 miles of express bus service, and over 500 miles of local bus service to feed the rail system.

“It was pretty heady stuff,” said Tom Gibbs, a Forward Thrust committee member and King County Metro’s first Executive Director. “The program was just magnificent. It was all grade separated and largely underground. It was a dream.”

All that rail came with a steep price tag: $1.15 billion. But the Forward Thrust committee was encouraged by the 1964 Urban Mass Transit Act, which authorized the federal government to pay for up to two-thirds of the capital costs of urban rail projects. Their plan asked for $385 million in property taxes from Seattle and King County voters. The feds would pick up roughly $800 million on top of that.

Though Washington D.C. was willing to foot a huge portion of the bill, transit was a big sell for Seattle and the surrounding suburbs. The region may have been growing fast, but people still mostly lived in low-density bungalows. The vast majority of the population got around in cars.

Further, the Eastside was just beginning to develop. It wasn’t nearly as built up as it is now, and Issaquah was just a tiny little village. “A friend of mine lived out there and he had a 10-acre farm where there are apartment buildings today,” Gibbs explains. Even in Seattle, “It was not nearly as dense downtown. … They were still talking about promoting living in the Denny Regrade.”

For many people, it was hard to imagine a need for a subway system at the time. Mullins moved to Seattle from southern California in 1968. He says, “When I got here, I thought the whole idea of reversible bus lanes and other engineering things like that were really odd for a place that didn’t really need it. There was only about an hour in the morning and an hour in the evening each day where I-5 slowed down with congestion.” 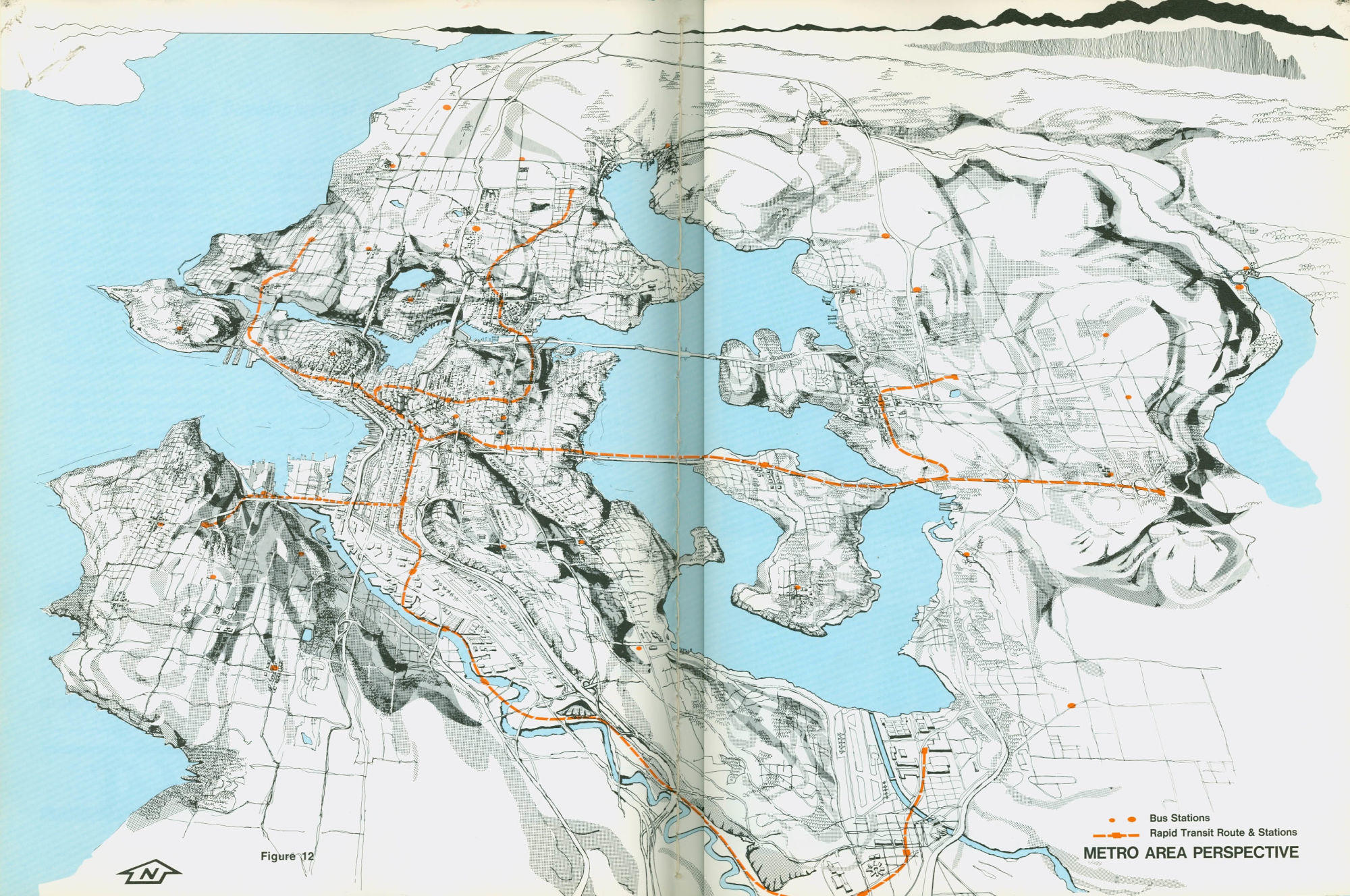 “The Rapid Transit Plan for the Metropolitan Seattle Area” as published in 1970.

“The Rapid Transit Plan for the Metropolitan Seattle Area” as published in 1970.

Despite the heavy political lift, the transit plan was polling well six weeks before the election, buoyed by endorsements from the Seattle Times, Seattle Post-Intelligencer, KIRO, and many civic organizations and political leaders.

According to Gibbs, the plan had as much as 68 percent approval ratings in some polls in the lead up to the election.

In a report to the Municipal League, Gould wrote, “The only way we can fail safe is with arterials, expressways, and a modern bus system … Let us not financially cripple ourselves for the next 40 years for a system that all experience proves to be a loser.”

Gibbs says General Motors also joined the opposition. “They brought in a lot of money,” he tells me. “And they brought in something called the Bus of the Future to demonstrate how buses would operate and what they could look like. They never built another one, they never intended to. It was strictly show to try and stop rail projects.”

On Feb. 13, 1968, Forward Thrust went to the ballot. Because the propositions were for property tax increases, they required a 60 percent majority.

The Forward Thrust committee was crushed by the losses.

Despite the losses, the Forward Thrust committee rallied, and re-ran four measures — transit, community centers, storm water and a new county jail — on the May 1970 ballot. This time Senator Warren Magnuson had secured  $900 million in federal grants to fund the bulk of the transit plan.

But the Seattle economy was also in the midst of a downward spiral, as Boeing laid off tens of thousands of workers. All four measures failed.

“It was a gloomy time, no question about it,” says Gibbs. “The chance of passing a big issue like that was nil to none, but it had to be tried. It created some momentum that resulted in the Metro council creation two years later.”

As Gibbs pointed out, the failure of the Forward Transit rail measures didn’t mark the end of mass transit for Seattle. The King County Metro bus agency was created in 1972, the monorail was saved in 1990 — the same year the downtown bus tunnel opened — and Sound Transit was created in 1993.

But transit advocates such as Shefali Ranganathan of the Transportation Choices Coalition feel like the region has only recently recovered from the shock of those dual electoral losses in 1968 and 1970.

“Forward Thrust was very much a moonshot in terms of size and scope … It took us another 40 years to get a rapid transit system and it’s still in the fledgling stages,” she says. “The opportunity cost of losing the federal investment and not getting ahead of the [growth] that came, you can’t even put a number to it.”

Ranganathan sees the region as taking an incremental approach to light rail so far, but the third phase is more in line with Forward Thrust’s moonshot, she says.

“Our biggest challenge will be to convince the voters this is the right time to take a big step versus little mini packages every 8-10 years. And I think we have a compelling argument.”

Her case strikes a very similar chord to the argument Ellis made back in the 60s — people are moving to Seattle, and the region must adapt.

“800,000 people are coming here,” Ranganathan says, “You’re going to have to share your limited road space with them. Right now, one fish spill on 99, one bad accident on 1-5, and our entire system shuts down. As we think about what is this region going to look like, part of that has to be that we find more ways to move people without highways.”

As to whether ST3 is the moonshot predecessor to Forward Thrust, it certainly qualifies on cost and size. But today’s proposal is decidedly different than Ellis’ transit vision.

And very little of ST3 will be paid by the feds. Ranganathan says, “Sound Transit has made some assumptions about what they can secure in federal grants and it’s around 13 percent. That’s nothing.”

Part of the cost difference comes from ST3’s scope. Whereas Forward Thrust was envisioned as a subway system for Seattle and the inner King County suburbs, ST3 is as much about regional commuter traffic as it is about transit within Seattle. The ST3 plan calls for 62 miles of light rail line across the region, creating a commuter spine from Tacoma to Seattle to Everett, a new line on the Eastside, and a second line in Seattle from West Seattle to Ballard through downtown. It would also increase Sounder commuter rail service and increase express bus and bus rapid transit service.

Ranganathan points out that between the planned expansions already funded through ST2 and the second line in Seattle ST3 would fund, light rail will cover much of the same ground as Forward Thrust would have.

Gibbs says the fact ST3 is a regional system gives people outside Seattle a reason to vote yes. But he still fears some voters might again struggle to imagine the value of the project for themselves.

“The unfortunate part from my perspective is it’s going to take too long,” he says. “What they’re proposing for completion dates is well beyond my lifetime and many others’ lifetimes. So getting people to vote for something that won’t appear (for decades) is a challenge.”

Jim Ellis’ predictions from the ‘60s have largely come true. There are over a million more King County residents today than in that decade, and the region’s freeways, highways and city streets clog more each day with drivers. ST3 is not the transit plan Ellis and his cohorts envisioned, but half a century later, voters again will decide whether rail can move the region ahead.

Beyond the Capitol Hill protests, young activists are finding creative ways to engage more people in the fight for change.