6 things do in Seattle this weekend (Plus, our picks for Lit Crawl!) 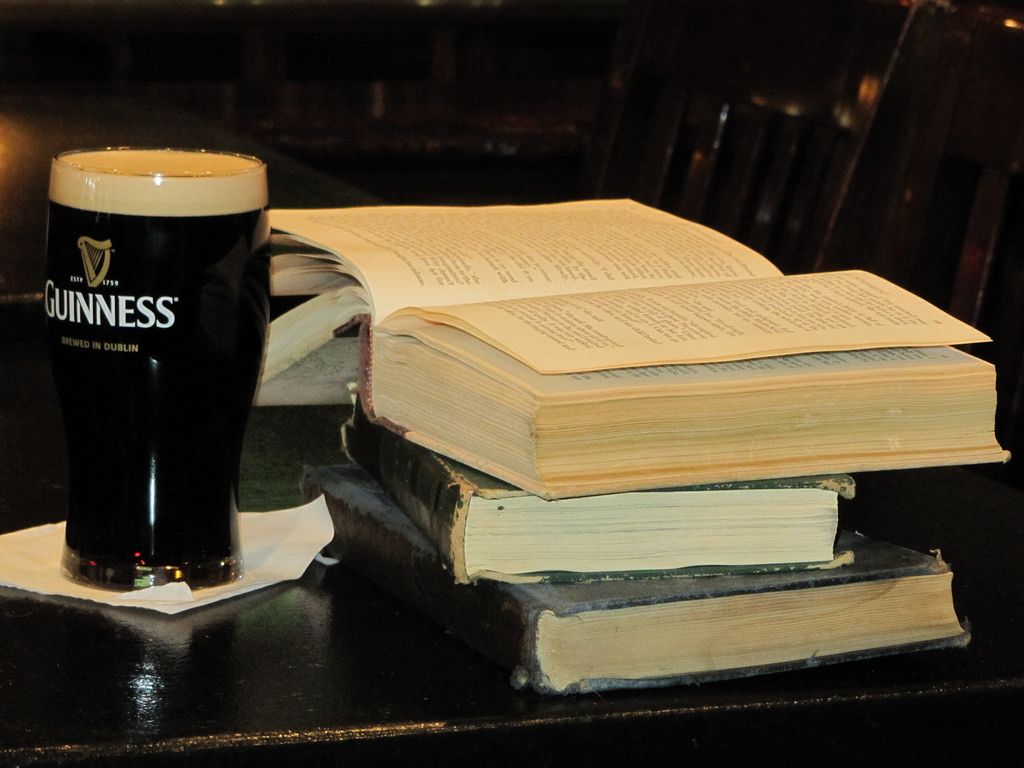 Booze, books, authors, readings, Crosscut, more booze — all of your favorite things! I've gone all three years I've lived in Seattle and it's only gotten better and better. This year's Seattle Lit Crawl will features over 80 Pacific Northwest readers and artists filling Capitol and First Hill bars with their stories (Full schedule here). Think pub crawl meets book readings. Here are our picks for the night:

I went to this one last year, had some cider and found out which books are best paired with cocktails. This year it's part of SPL's Booktoberfest and Librarians Andrea and David will take the stage. Tip: Get here early because the room is a bit small and it can get hard to hear.

In a year when the first woman is running for the presidency, four women poets — Samar Abulhassan, Laura Da’, and Ann Teplick — read from their works and share poems from a radical female poet who inspires them. Hosted by Seattle Civic Poet Claudia Castro Luna.

Working Stiffs: Tales from the Grind

The things we do for a paycheck: Real-life and imagined tales from Nassim Assefi, John Englehardt, Kristine Lloyd, and Nikkita Oliver. They always have fun stories, and Nikkita Oliver is an incredible slam poetry artist — DON'T. MISS. THIS. ONE!

Parenting is not all coziness, cookie-baking, and watching the kids score soccer goals. There is spilled milk, endless chauffeuring, and dark holes in which we nearly — or completely — lose our sense of self. Local writer-parents (including many of our friends at ParentMap Magazine) Sonora Jha, Theo Pauline Nestor, Dave Sanders, Nancy Schatz Alton, and Natalie Singer-Velush read from brand new works that explore parenthood, lineage, love, and longing. 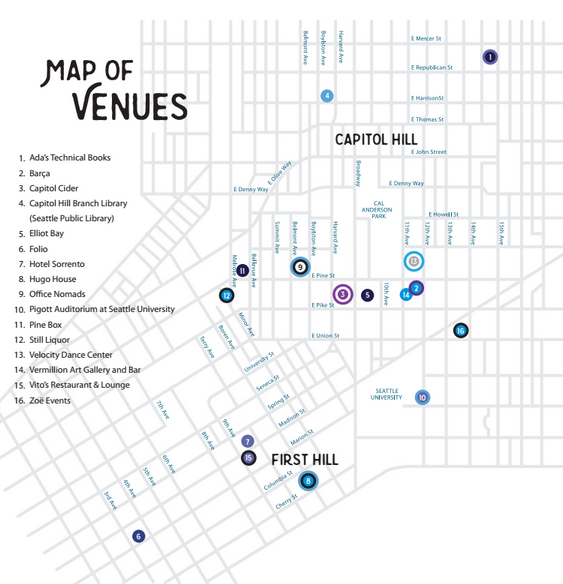 At this reading featuring Robert Lashley, Imani Sims, Anastacia Renee, Quenton Baker, Sakara Remmu, and Andy Yun, expect every voice to reveal a Rick James-level of disregard for politesse — language will likely be foul. In lieu of “trigger warnings,” you might have to dodge verbal bullets meant for your mind. Bring your guilt, your fragility, your imagination, and your spot-cleaner, because your couch is about to be fucked. Hosted by Natasha Marin, creator of the Reparations Project. #IJS

Food is personal and essential to our identities, but it can also be disorienting and foreign. Food is one way we learn about ourselves and, in a country as diverse as ours, it also serves as an entry point into other cultures. Eating Ethiopian injera, learning to make pho, or mastering your grandmother’s hamantaschen recipe will bring you closer to another person’s cuisine, but that doesn’t necessarily mean you will understand their experiences. Four writers — Monica Dimas, Angela Garbes, Anna Goren, and Rachel Kessler — examine the issues that come up as we cook and eat “other people’s food.”

This one you DEFINITELY don't want to miss! Crosscut editors will team up with local comics for dramatic readings and interpretations of local and national leaders and politics. We promise, a "Seattle process" joke is guaranteed.

Fifty years ago in New York, Robert Rauschenberg and Billy Klüver masterminded a series of performances and exhibits that married art with science and technology. It was called “9 Evenings: Theatre and Engineering,” and, according to Wikipedia, it heralded several “firsts.” For example: the first time closed circuit TV was used on stage. Now a new incarnation of equally forward-thinking performances has been taking place in venues across Seattle; the final 3 evenings of performances include a variety of works. They include a new dance work by Dayna Hanson called 28 Problems, which is about the language of mathematics; a multimedia performance of The Hidden Code by Paul Miller (AKA DJ Spooky), which weaves music with audio from physicists, biologists and computer scientists; and a sound piece based on an electroacoustic instrument that converts data into sound. A whole host of exhibits is also on view at Seattle’s King Street Station. A full calendar is here. 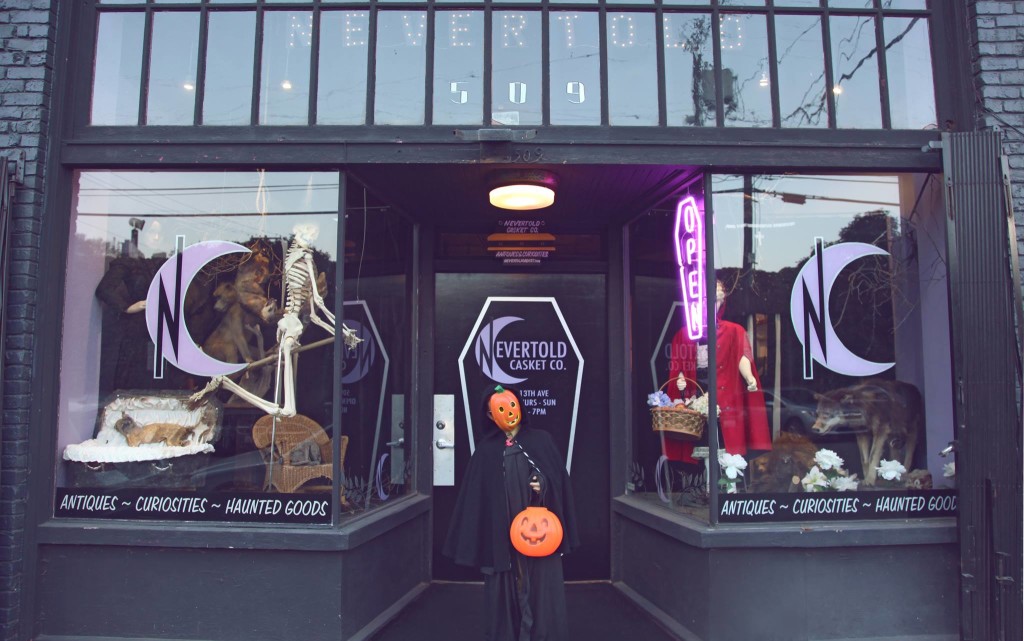 Confession: I am a bit of a Halloween Scrooge who, since passing the age of receiving candy, has never really grasped what people are so excited about. My recommendations for the following Halloween-themed events are all the more incredible then as they are the ones that managed to tempt even me, starting with Nevertold’s Open Casket Halloween Party. I LOVE this place. Best described as a curiosity shop (open weekly Thursday- Sunday), it is a home for haunted items, from bat skeletons to old postcards to taxidermy heads galore. Its former Wisconsinite owners embody just the right amount of darkness balanced with friendliness and best of all, their excitement and knowledge shines through in every piece they collect and sell. I can think of nowhere better for a Halloween party, complete with absinthe, wine, a séance, and a costume contest, among other “reminders of death’s ever present shadow.” Cue delightfully wicked laughter.

I’m convinced that if you think about it, you can recall a time when you saw a crow do an impressive thing. For me, the first I recorded was watching a crow at Hurricane Ridge wait for a tourist family to get up for a photo opp and then swoop in and, in under two seconds, open a plastic donut container with its beak. You may have read a bit about them (They can recognize faces! They mourn their dead!) but what other mysteries lie in our urban neighbors, corvids (crows, ravens, jays, and magpies)? Take a walk with naturalist Ed Dominguez in Seward Park and learn all about what’s been inspiring and intriguing humanity for centuries. Maybe I’ve just got Halloween on the brain, but this seems like the perfect complement to the raucous nighttime Halloween festivities.

You can find Collide-O-Scope monthly at Re-Bar, showing its eclectic mix of hilarious, unreal collection of videos and mash-ups. For this one special night, Collide-O-Scope will be at the Egyptian, with “a frightfully fun fest of found-footage phantasmagoria filled with laughs, shudders, thrills, and prizes.” Hosts Shane Wahlund and Michelle Anderson will present the perfect mashup and montage of Halloween films, interspersed with fun and prize drawing for ephemeral oddities, like movies on Blu-Ray. NOTE: it doesn’t seem like a costume in required to take part in the fun.

Handmade in Camp: What We Couldn’t Carry

Our region’s personal connection to the Japanese internment can be found in this unique exhibit billed as a testament to human ingenuity, craft and courage. On display are more than 60 items—some practical, some purely aesthetic—but all crafted by someone of Japanese ancestry who was interned during World War II.  Furniture, games, jewelry and quilts fashioned by whatever was found in horse stalls-turned internment cells. There’s only a short time to see this exhibit at the Auburn museum before it closes Nov. 6. And when you’re at the museum consider: about one-third of Auburn’s population was forced into the camps in 1942 and only a handful of families returned to the area.

If you go: Handmade in Camp: What We Couldn’t Carry,  Auburn’s White River Valley Museum, Through Nov. 6 ($5)—F.D.