The $54 billion question: Can we afford Sound Transit 3? 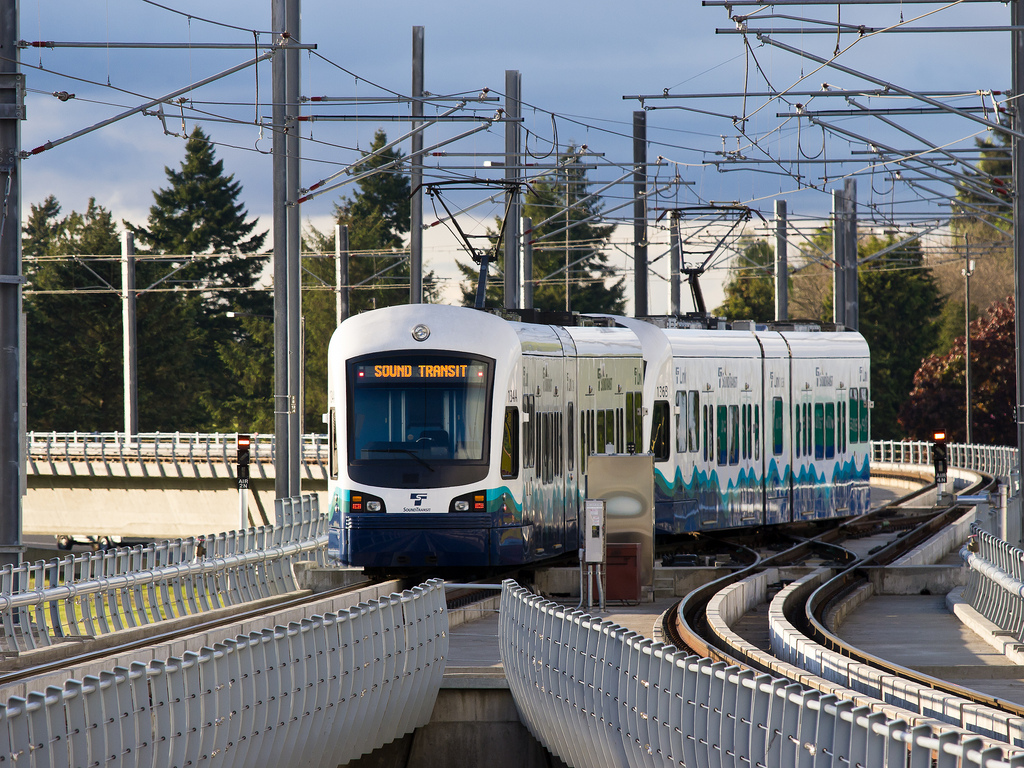 This is the third in a multi-part series on Sound Transit 3. Read part 1 here.

If you’re Washington’s King, Snohomish and Pierce Counties, for $54 billion, you can get yourself a ticket to ride. The regional transit agency, Sound Transit, is offering up an expansive light rail, Bus Rapid Transit and commuter rail package to residents in November. The plan, dubbed ST3, has drawn both bright-eyed praise and fiery indignation.

It’d be like any other local ballot measure, were it not for the price tag. For a fifth of the cost of ST3, Elon Musk claims his rocket company can develop and deploy an interplanetary transport system capable of shuttling people to Mars and back. The proposed light rail expansion, on the other hand, makes it only as far north as Everett.

A little back-of-the-envelope work on ST3 in the last article in this series came up with a median cost to an individual taxpayer of $7,000 spread across 25 years; or, if you prefer, a penny out of each of our pockets each year for every new person who is sitting on a bus or train each day in 2040 rather than clogging the roads in a car.

But $54 billion is still a mountainous pile of cash, so this time around, we’re looking at the funding pie and whose kitchen the ingredients would come from. We’re also asking whether we can afford to eat this pie and still have nice things like, say, good public schools. (Bear with us; the pie metaphors get even more tenuous from here.) 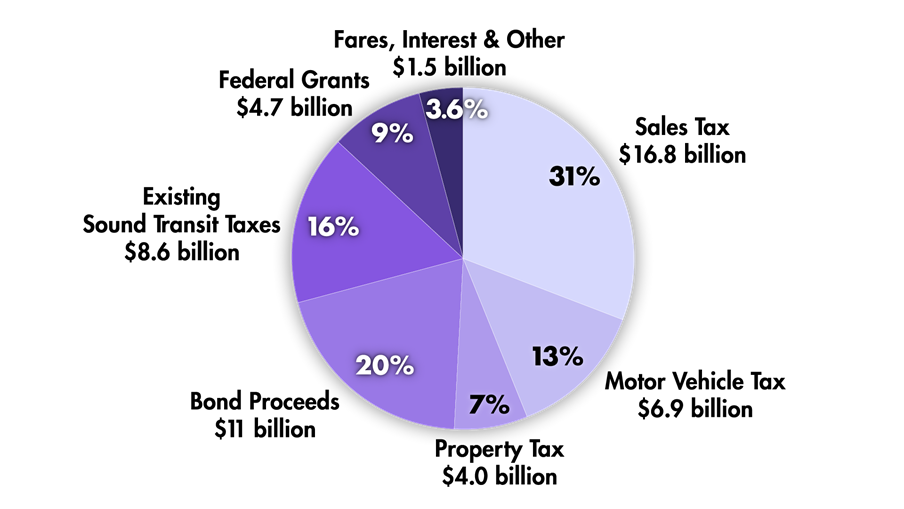 To understand how Sound Transit picked the recipe, though, we need to wind back the tape a few years. The agency’s previous package — the predictably named ST2 — only authorized one new taxpayer-fronted revenue source: a sales tax increase. When the economy bottomed out in 2008, revenues dipped accordingly, engendering project delays, cuts and a certain degree of voter distrust in the agency. For Sound Transit, it has been an uphill battle since then.

According to Andrew Villeneuve, executive director of the Northwest Progressive Institute, the thinking around ST3 financing therefore looked something like this: “We can’t do another package unless you give us more revenue authority.” The ‘you’ here is the state legislature, which grants Sound Transit the power to propose specific types of tax increases to the public — that is, they’re the ones who allow the agency to propose a sales-tax hike, but not, say, an income-tax hike.

To voters upset with the nature of the package’s funding sources, Villeneuve offers, “Get mad at the legislature, not Sound Transit.”

But some members of the legislature are also upset about the financing, particularly the degree to which the tax burden will hamper future efforts to raise revenues for school funding. The legislature’s hands are tied in a few ways that are unique to Washington: Property taxes, for example, can only be increased a maximum of 1 percent per year in the state, and a 2012 Washington Supreme Court decision — the McCleary decision, if you’ve been keeping tabs — says the legislature is constitutionally obligated to funnel billions into the state’s chronically underfunded schools.

State Sen. Reuven Carlyle, a Democrat representing parts of Northwest Seattle, recently wrote that the ST3 proposal in its current form “consumes the oxygen in the room on taxes for virtually all other public services at all levels of government for years to come.”

Carlyle suggests that Sound Transit sub out the property tax slice of the pie and instead ask voters to authorize a per-employee tax paid by companies with more than 50 employees, an idea that’s been deeply unpopular with the business community. “With due respect and deference,” he writes, “I believe a modest business employee fee — designed in partnership with the business community for transportation — shouldn’t be a holy untouchable revenue source.” Carlyle has also previously suggested sources like a payroll tax and a gas tax.

But for Sound Transit, a business employee fee isn’t so much untouchable as it is irrelevant. The agency already has the legal authority to collect an employee-headcount tax, “but the revenues it could generate would be so small in relation to the need and public demand that the Sound Transit Board did not give it much discussion,” says Sound Transit spokesman Geoff Patrick. “The taxes that the ballot measure is utilizing are the ones that have the ability to raise the needed funds.”

Carlyle did not respond to Crosscut’s request for comment.

New taxes are also only half the pie. But there’s a question creeping up here: Why not simply borrow more, instead of sticking voters with such a large absolute bill?

The answer is relatively benign: Sound Transit has an enviable credit rating to protect. All of their bonds are AAA-rated by Standard & Poor’s. “We’re not borrowing more because we want to keep the amount of debt in a place where it doesn’t affect the interest rates we have to pay,” affirms Patrick.

Translation: Sound Transit can borrow money at rates cheaper than most local governments, and they’d like to keep it that way.

Some analysts have noted that in the second half of the ST3 project timeline, Sound Transit will have fully repaid its bonds from previous projects, and this repayment will free up a new stream of cash that was previously being shelled out to lenders. In theory, this is true. In practice, it’s all relative. As the ST1 and ST2 debt is serviced, something else happens: The operation and maintenance costs of the existing infrastructure continue to grow. Sound Transit doesn’t necessarily get to borrow more just because they’ve paid off their previous loans.

This is mostly to say that the size of the debt-flavored slice of the budget pie is relatively fixed. So is the slice corresponding to federal grants: There’s a fairly reliable 13-percent figure that Sound Transit expects in D.C. money. The wiggle room, then, comes with respect to taxation and fares. And in theory, Sound Transit could raise fares, but projected revenues from fares are currently only 5 percent of those from tax collection — that is, subbing out some taxation schemes for more expensive rides would require order-of-magnitude increases in ticket prices. Which leaves them with taxes.

Now, assume for a moment that the package’s budget is reasonable, its projects are well-selected, and its measurements for success are appropriate. (These are big assumptions, and the topic of the next article in this series.) What, then, of Carlyle’s fears? Does ST3 really suck up all “the oxygen in the room”? If we opt for ST3, will we suffocate public schools?

The question is tinged with more politics than policy. Education funding will indeed remain a murky area, but its future is largely a function of policymakers’ ability to pass further legislation (to hike property taxes, for example, alter that state law to allow for greater than 1-percent increases in property taxes annually, or tap other potential revenue sources like income taxes). ST3 may take up political oxygen in the room, but it does not legally preclude pumping more oxygen in for school funding or other nice things.

One point on the topic, however, is worth raising: Because of a little-referenced 2015 law altering Sound Transit’s fiscal responsibilities, ST3 also directly funds education.

The law (Revised Code of Washington Section 81.112.360, if you must know) imposes an “offset fee” on regional transit authorities for construction contracts on which they pay no sales and use taxes. To make up for the lost tax revenue, Sound Transit must deposit 3.25 percent of its total payments to construction contractors, up to $518 million, into a fund that must be used “to improve educational outcomes in early learning, K-12, and higher education” in the Sound Transit District. (Another set of legislation imposes on Sound Transit the responsibility to make a $22-million investment in affordable housing.)

This is worth noting, if only because of concerns like Carlyle’s. And ultimately, the education system needs more than the half a billion it will get from Sound Transit, so whether the transit agency’s contribution is substantial is a matter of perspective.

There are still larger questions at play, though. Are there cheaper alternatives? Can voters trust the agency to do what it says? And how much economic and technological forecasting are we even capable of?

These questions will be the subject of the next piece in this series. All aboard!