Seattle is in the midst of what could be a dramatic shift in the way it helps people who are experiencing homelessness. A report released by the city in October lays bare a system that wastes time and money even while the crisis deepens. The solution, according to the report, is pivot away from emergency shelters and services and get people into permanent housing, posthaste. With a stable place to live, people are better positioned to get back on their feet.

But permanent housing is precisely what is in short supply, and a multifaceted public service system like Seattle’s doesn’t turn on a dime. We know where we are, and we have a pretty good sense of where we want to be, but what to do with the estimated 4,500 people who are living on the streets of King County in the meantime?

The local nonprofit Compass Housing Alliance is testing out a concept that could help bridge what is increasingly known simply as “the gap.”

The project, called Compass Crossing, will include a cluster of modular living units that are specifically designed to be an alternative for those who sleep outside in the city. They’re more affordable and flexible than traditional construction, and far quicker to put up, but still more stable, comfortable and secure than tents: It’s “a new type of housing that can be done faster and cheaper,” Compass Executive Director Janet Pope says. 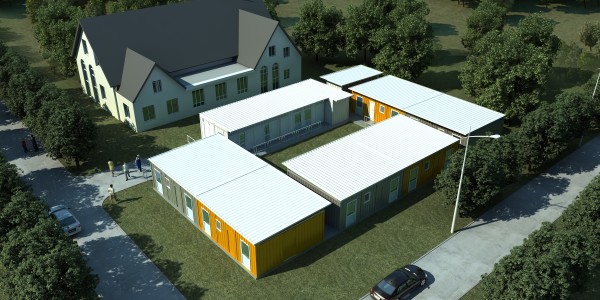 Modular buildings, made of prefabricated sections manufactured offsite, have become increasingly popular over the past few years (there’s even a steel modular skyscraper in Brooklyn). It’s an attractive option for developers because the structures can be built in an average of one-third the time and at one-third the cost. But Pope says Compass Crossing will be the first time the technology has been used to serve the homeless.

Compass Crossing, in the Columbia City neighborhood, will consist of 13 units that will house a maximum of 19 people in singles and pairs. The six double occupancy units will be 240 square feet each, and the seven single occupancy units will be 160 each (sizes akin to Seattle’s apodments). The units, which look like a cross between a shipping container and a bungalow, will each have one or two beds and a bathroom. They are designed to be both welcoming and efficient; for example, heated towel bars in the bathrooms are simultaneously a luxury and an effective heating source for the whole space.

But more than a collection of individual dwellings, Compass Crossing is designed to be a community. There will be a communal kitchen, common room, and courtyard, as well as offices for the premise’s property and case managers, who will work with the residents to maintain the property and connect them with the resources that they need to find stability, like mental health and addiction counseling.

Compass Crossing will welcome people who may be disqualified for traditional homeless shelters, such as people who have pets, want to be able to stay with a partner or friend, or have their own possessions. The site will even include storage lockers to give residents a place to put their things.

Compass Director of Communications Suzanne Sullivan says that if all goes according to plan, the modules will ship from China in January, be set up in February, and full of occupants come March. 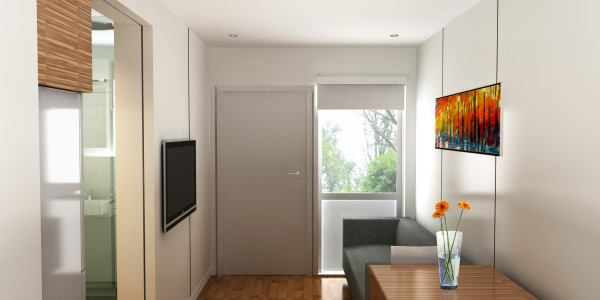 Compass is working with the local modular construction company OneBuild, which has assembled everything from single-unit offices to 48-unit retirement homes, to design and build the structures. The technology was developed largely by the firm Forest City Ratner. All in all, the proof-of-concept cost an estimated total of $2 million — half from privately raised funds, and half from a donation from the Paul G. Allen Family Foundation.

Once they’re up and running, a steel modular building such as Compass Crossing would cost and estimated $80-100,000. In comparison, a traditional affordable housing building costs about $250,000.

The pilot project will last for three years, after which time Compass plans to build a more permanent housing development on the property. At that point, the modules could stay in the building’s parking lot or simply be moved to another location, Sullivan says.

Which gets at one of the main selling points for the concept: flexibility. Because the structures are small and movable, the units could be placed around the city as they are needed and where there is available land — in underused parking lots, in empty public land, in small donated parcels — potentially turning concentrated tent encampments like the jungle into a diffuse network of “Hoovervilles.” 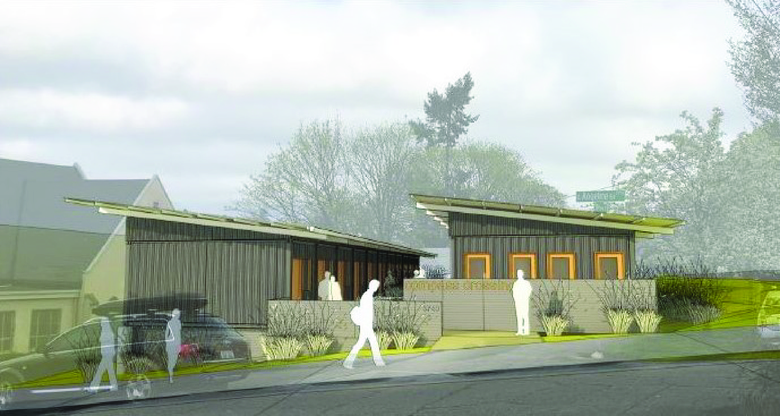 The idea is already picking up steam. City Council member Sally Bagshaw is among those who have recognized Compass Crossing’s potential.

At the same time, Pope stresses that building responsive housing is just one part of the solution. “We need to make sure that we’re securing people in a safe and stable environment,” she says. “But we can’t expect them to just exist in that space without connections to the services that they need.”

“This isn’t the solution for homelessness,” Compass of Strategic Operations Ryan Mielcarek adds. But it’s one example of how he thinks we should be innovating for the homeless.

“What if we moved as a community,” Mielcarek asks, “with the urgency and resourcefulness that the homeless have to everyday to survive?”