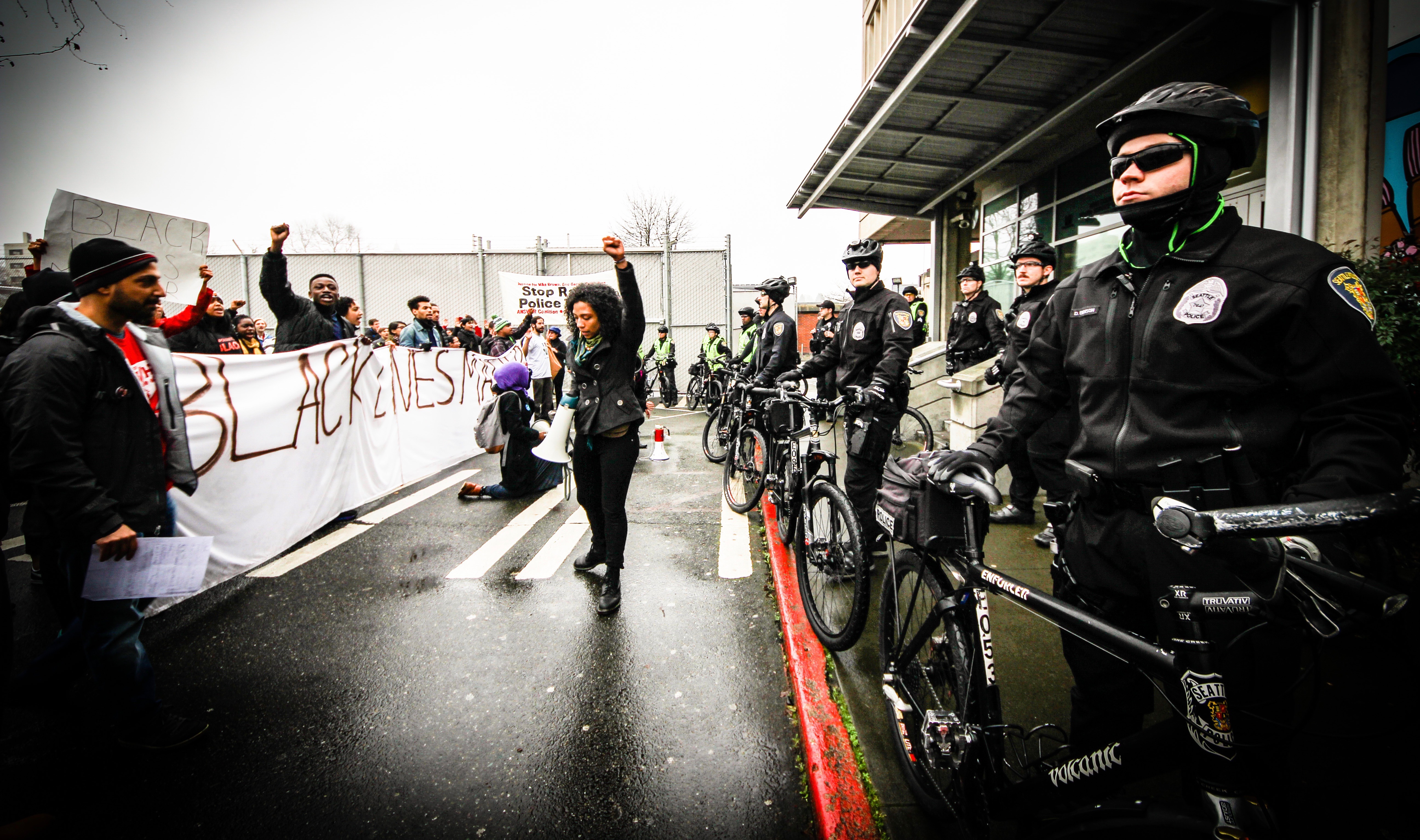 Seattle police and Black Lives Matter activists at a 2015 demonstration.

If you found a letter addressed to the American Neo-Nazi Party on the sidewalk, would you put it in a mailbox? If the envelope was addressed to the Black Lives Matter movement, would it make a difference?

“What’s going on?” a post office employee in Ballard wondered to me, as she and her fellow letter carriers found more and more envelopes like these around the neighborhood, sometimes propped up on rocks, as if left for people to find. They left her feeling “creeped.”

An investigation into the letters uncovered that Seattle residents are the subject of an experiment by University of Washington sociologists, which seems to equate the American Neo-Nazi Party with the Black Lives Matter movement.

In the experiment, University of Washington graduate students place envelopes throughout Seattle neighborhoods addressed to either one of the two groups, or a third neutral party. They then collect data on which envelopes get mailed. It’s called the “lost letter" experiment, and is a contemporary take on an experiment first conducted by controversial Yale sociologist Stanley Milgram in the 1960s. That experiment also used the American Neo-Nazi party as an addressee on “lost” envelopes.

According to UW Sociology Professor Ross L. Matsueda — whose students are leading the study — the experiment is meant to provide an independent measure of a neighborhood’s altruism. How many people in a given neighborhood will pick up an apparently dropped, stamped, addressed letter and send it on its merry way, depending on the addressee?

Funded by the National Science Foundation and approved by UW’s Institutional Review Board, the UW study group wanted to replicate Milgram’s experiment, and build on similar studies conducted in Chicago and London.

As the UW study was designed, the American Neo-Nazi Party seemed “relevant again,” Matsueda said, with the resurgence of the far right in national politics. He did not anticipate it would be shocking or offensive to use the Black Lives Matter movement for contrast, implying equivalence between a fascist, racist organization and activists protesting the criminal justice system.

“We went back and forth on it quite a bit,” he said. “We weren’t thinking about shocking. Just different…. It was just a different organization that seemed to be relevant today.”

An earlier pilot study used a police organization instead of the Black Lives Matter movement, but the returns “weren’t that interesting,” Matsueda said.

For some, seeing envelopes addressed to the American Neo-Nazi Party on the sidewalk of a neighborhood — as if accidentally dropped by someone living nearby — could breed a sense of unease or outright dread. But according to Matsueda, the envelopes are actually supposed to measure the social cohesion of neighborhoods, not undermine that feeling.

The primary question of the experiment, he said, is how the rate at which envelopes are placed in mailboxes varies by neighborhood. Reprisals of Milgram’s study have been conducted in Chicago and London, and showed a possible correlation between “cohesive” neighborhoods (the ones that mailed envelopes in more often) and lower crime rates.

The UW experiment will theoretically support these findings, and identify neighborhoods with “collective advocacy” — the willingness of residents to intervene to prevent a crime or to help one another, such as providing CPR if a neighbor appears to be having a heart attack. Matsueda said it’s likely that more affluent neighborhoods will be more “cohesive” than poorer, “transient” neighborhoods, where he expects people may “act more selfishly” by not returning the letters, he said.

The pioneer of this study, Stanley Milgram, is infamous for his "obedience experiments" at Yale, which showed that ordinary people would administer increasingly painful shocks to innocent volunteers, to the point of causing apparent death, by heeding an authority figure over their moral judgment. These experiments were inspired by the Holocaust, and his choice of the American Neo-Nazi Party for his letters experiment was deliberate.

According to Matsueda, fieldwork for the UW study has completed, and the envelopes will not be distributed any further. Whether they were worth the negative feelings they inspired among the letter carriers I spoke with, not to mention neighborhood residents, remains to be seen.

Peggy Sturdivant writes a weekly column for the Westside Weekly, and is curator of the It's About Time Writers Reading Series, founder of Ballard Writers Collective, and has worked in environmental consulting and science education.