New Washington Poll: The winners, the losers and a few close calls 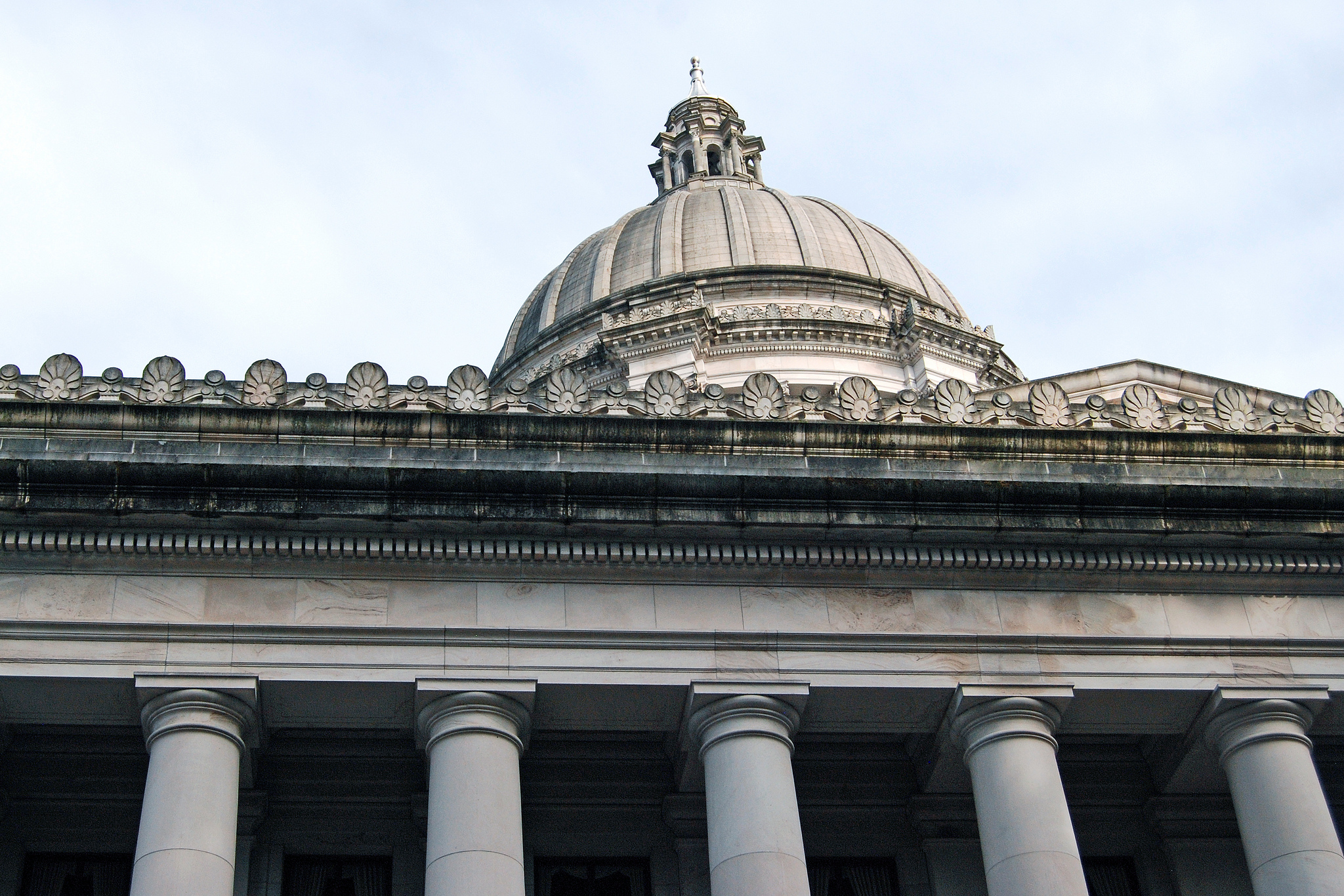 An interactive version of all poll results can be found here.

Come Election Night — yes, please arrive soon — there will be much cheering across the land. Perhaps no one will be reveling as enthusiastically as Seattle entrepreneur Nick Hanauer.

Hanauer is bankrolling statewide initiatives enhancing gun safety and raising the minimum wage. Both look like easy winners, according to a new KCTS-9/Crosscut Washington Poll.

The poll, led by Christopher Sebastian Parker, professor of political science at the University of Washington, surveyed 750 registered voters around the state earlier this month. The results give us a look at who’ll be high-fiving and who’ll be sulking once election results are in – with a few contests still too close to call.

Washington voters will unequivocally reject the endless antics and all-around disgraceful behavior of Donald Trump. The poll shows Hillary Clinton winning in this state by as much as 14 points.

Democratic U.S. Sen. Patty Murray will hold onto her current job. Murray beats Republican challenger Chris Vance in the poll by a whopping 16 percent. Vance , who has served as the Washington State Republican Party chairman, will have to find something else to do.

The governor’s race looks closer than it has been. The poll shows Democratic Gov. Jay Inslee leading Republican Bill Bryant only by 6 percent. But before you say, “And, we have a race,’’ consider that Bryant has never been closer than 6 points, and that other polls show a wider spread, 10 or 11 percentage points, more like the results in the August primary.

Bryant is likely to extend the 32-year record of Republicans who cannot win the governor’s office in this Democratic state, which votes even more Democratic in presidential years. That proclivity becomes more pronounced when a few liberal-ish initiatives appear on the ballot as they do this year.

(Still, Bryant deserves some points for the TV ad that shows him stuck in traffic, telling viewers how much he “gets” their concerns about gridlock. You have to laugh when a deliveryman knocks on Bryant’s car window and proffers a pizza. Who doesn’t want a sizzling hot pie with cheese and Portobello mushrooms or whatever roller-bladed in to ease the frustration?)

The measure garnered 51 percent backing. But the number of undecided voters — 27 percent — is so substantial you get the feeling that all the sales tax lowering and carbon tax creating described in the fine print creates too much head-scratching.

Compounding all of that, environmental groups, with a few exceptions, are not on board. So this measure may be the one that keeps vote counters busy for weeks after the election. Oh, how we love to tally the ballots as slowly as possible around here. 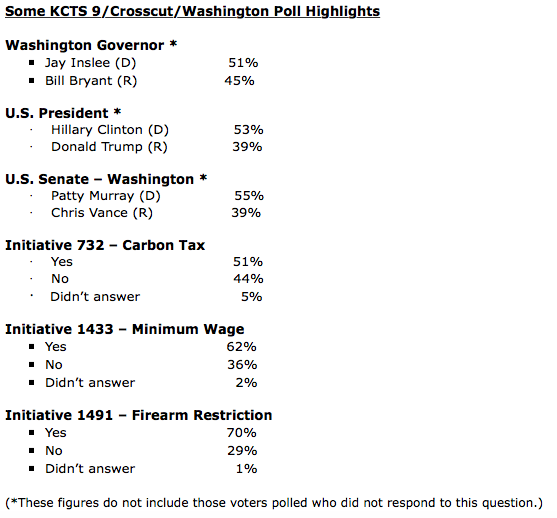 And then there are results that involve Hanauer and some of his fellow well-heeled initiative backers:

Support for Initiative 1491, the gun safety plan that creates so-called extreme risk protection orders, is breathtakingly strong. Seventy percent of voters said they want family members to be able to separate a dangerous relative from guns for up to one year, if a court confirms the need.

This measure is doing well because the idea is popular and also because the NRA and friends hoisted a white flag from the beginning, preferring instead to spend cash in Maine and Nevada, two states considering expanded background check measures. Polling on gun safety also looks promising in those states; the gun lobby spending in Nevada is heaviest, making that outcome more tenuous.

Hanauer also looks like he will be victorious on Initiative 1433, the effort to boost the statewide minimum wage to $13.50 over four years — a measure not as radical as the $15 minimum wage approved in Seattle. Voters saw what happened there: Economic woes that were supposed to blossom did not. Get a load of those construction cranes towering above the city everywhere you look! Initiative 1433 polls at 62 percent support.

The poll also took the state’s temperature on matters not directly related to the election. For example, 61 percent of participants agree with this sentence: “The true American way of life is disappearing so fast that we must do anything, and everything, to save it.”

Parker says this illustrates the more diffuse anxiety associated with how voters see American society and culture changing before their eyes. He points to another truth captured in the poll: there is a great partisan divide that informs voter attitudes.

The poll was conducted statewide from Oct. 6 through 13, online, which is new for this effort. The Washington Poll has a great reputation for accuracy over the years.

Despite some of the anticipated excitement that the election spurred — CNN, for example, made a pile of money covering one unbelievable utterance after the next from Trump — this particular election cannot come and go quickly enough. Even then, it will take time to wash away the bad vibes from all the nastiness that has transpired.