When cops play security guard, whom do they serve? 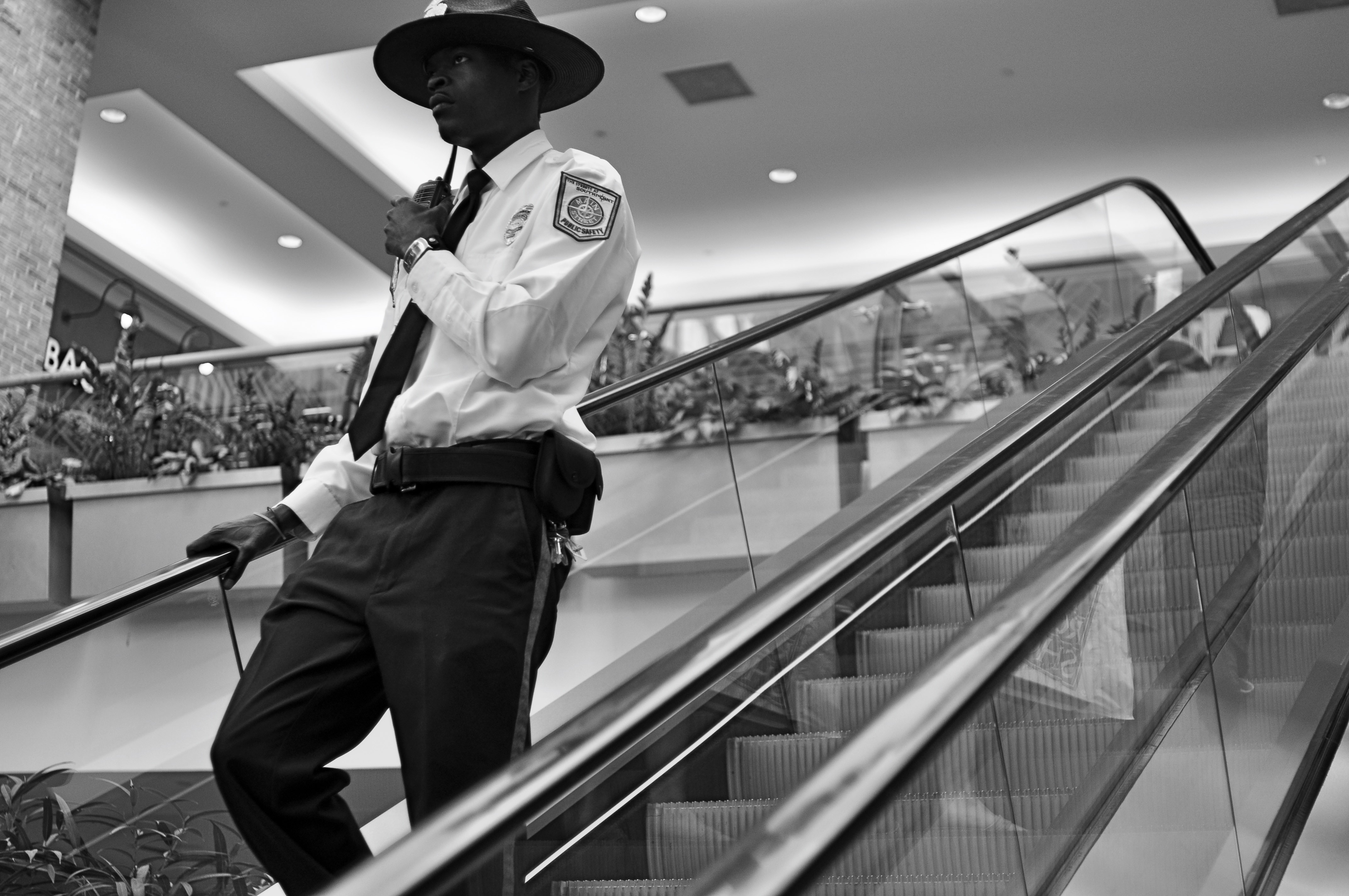 After an anonymous man hit Kellyann Mullen across the face outside her downtown apartment, he apparently turned his back, walked down Third Avenue and disappeared into the Ross department store. While it may not have been wise, Mullen was in no mood to let him get away, so decided to follow him.

To her comfort, a security guard stood just inside the store, to the left of the entrance. He was dressed in what appeared to be a Seattle Police Department uniform: dark navy blue in color, an official-looking patch on his arm, a radio on his hip.

“I asked him, ‘Are you a police officer?’” said Mullen, standing just outside the department store, retracing her steps. “He said yes. And I said, ‘I just got assaulted. Will you please call the police?’”

The officer was Daniel Espinoza. If that name sounds familiar, he was arrested in 2004 for soliciting sex from an undercover police officer. Before that, he shot and killed a man in a drug bust gone violent. And years later, after his arrest, when he was deployed to Iraq as a U.S. Marine, he wrote about an anti-war protest in the internal newspaper of Seattle Police Officers Guild: "I have to admit when I found out I was getting deployed to Iraq, I was overjoyed that I didn't have to deal with those whining pathetic war protesters.”

At last word, he was manning a desk in the West Precinct.

But on this day, he was punching the clock on his “secondary employment” at Ross, likely to earn a few extra bucks. This is common among officers, who can often be founding working at construction sites, parking garages or Mariners games. While the department store was writing his checks, Espinoza’s duties as a sworn officer don’t change regardless of who’s paying him.

It’s right there in the police manual: “Employees working off-duty must adhere to all Department policies and procedures and are held to the same standards of conduct and performance as those that apply to on-duty work.”

Yet Espinoza did not call the police as he should have, regardless of whether he believed Mullen’s story. Confused, Mullen went to a Ross employee and asked one of them to call the police. The employee also refused and, in fact, asked Espinoza to escort Ms. Mullen from the store. He complied, telling investigators with the Office of Professional Accountability, SPD’s accountability arm, that she appeared to be in crisis. He performed a crisis intervention, as it were.

In fact, she was in crisis. She’d just been assaulted.

On the street, Mullen borrowed a phone and called the police herself. A report went out, echoing on the radio at Espinoza’s hip. Roughly put, it went, “Reports of an assault on a woman near Ross, officers respond.”

Espinoza heard the call, he would later tell OPA. Still, he did not respond nor did he notify the dispatch that he was even in the area, choosing instead to remain inside the store.

By the time officers did respond, the man Mullen accused of assaulting her had left Ross, and had walked away from the scene for good.

In theory, secondary employment should not be a grey area: Officers are to behave as officers regardless of where they police.

But the reality is it’s the greyest of areas, and lacking in oversight. As a result, secondary employment is fertile ground for misplaced loyalty to outside employers and rubber stamp approvals.

“It’s very important in the public perspective,” said co-chair of the civilian Community Police Commission Lisa Daugaard. “People have no idea if someone is wearing uniform as part of the department or whether they’re moonlighting. It’s incredibly confusing if the same roles and standards don’t apply.”

Mullen’s case is certainly not the only example of this. In 2014, the Seattle Times wrote about officers directing traffic for private parking garages, noting that while some legitimately controlled the flow of vehicles, others clearly favored cars exiting the garages.

The issue has also come up recently in regards to private patrols in wealthy neighborhoods, often carried out by security companies employing both off-duty officers and civilian security guards.

The former auditor of the Office of Professional Accountability, Anne Levinson, has been writing about secondary employment for years, calling for a civilian-led, centralized office to manage its approval and oversight. As it sits now, it’s murky how officers procure off-duty work, which can and has led to officers working for friends or developing friendly relationships with their outside employer.

Permits to work off-duty last for a year, and are largely rubber stamped by an officer’s superiors. If an officer is buddies with the store manager, it may get harder to behave like a cop as opposed to a store employee.

Levinson has suggested that the mayor or the department could have overhauled the secondary employment system without a fight from the union.

“Employees do not have a right to additional employment, so these kind of reforms should not be held back on the theory that they require bargaining,” said Levinson.

But these reforms never happened. That may have been because some in the department, including former police chief Harry Bailey, believed changes to secondary employment did require bargaining.

But even in the department’s collective bargaining agreement leaked to The Stranger, the issue was labeled as a “reopener” — a sort of “we’ll come back to that.” That agreement was voted down by the union.

Following the rejection of the contract, the city and the civilian Community Police Commission drafted a suite of police accountability recommendations. While the shortfalls of the leaked contract emboldened the CPC to write legislation without regard to what should be bargained, early drafts from the mayor’s office walked a more cautious line. Changes to secondary employment were not recommended.

However, after negotiations between Levinson, the CPC and the mayor’s office, the final draft submitted October 7 included a recommendation to flip management of secondary employment to a civilian-led office, just as Levinson wanted.

“The office issue is recognizing that secondary employment is an enormously lucrative venture for officers,” said Daugaard. “It is a huge benefit and if it’s not allocated and organized in the same way, it can become an incentive structure that’s at odds with the good formal work that’s done.”

Daugaard imagines the new office managing secondary jobs would look like a union hiring hall, in which employment is handed out. For one, that could create a mechanism to reward good performance. But more relevant to Mullen’s encounter at Ross, it could eliminate any opportunity for officers to build longstanding relationships with their secondary employers.

“If there’s an employer who wants to hire someone, they get what they get,” said Daugaard.

These accountability recommendations must first get approval from U.S. District Court Judge James Robart, as part of the federal consent decree to reform the SPD. Only then may the Seattle City Council take them up as legislation. That won't happen until after budget season, in December, putting their adoption well into 2017.

As far as funding, the mayor's budget sets aside $3 million for accountability purposes. None of that money has been appropriated, however, so it's unclear how far that's expected to stretch; a good portion of it will presumably go toward establishing the Office of Inspector General, a new civilian oversight body.

Espinoza eventually got dinged for his failure to act. OPA agreed with Mullen that he should have done more and gave him a 3-day suspension. But that punishment doesn’t have any bearing on his future as a security guard.

For its part, Ross no longer hires off-duty officers, replaced by far less official employees standing near the door, a change they made a few months ago according to one employee.

When contacted, however, the assistant manager said she was forbidden to speak to media and directed Crosscut to the store’s corporate headquarters. They have not responded to voicemails, so it’s unclear whether the store’s decision was related to officer Espinoza.

Changing the secondary employment infrastructure could also have bearing on how and when the department rolls out body cameras. As Crosscut previously reported, the CPC is wrestling with where to draw the line on who needs to wear them.

“The department has to deal with the whole issue of secondary employment before we even tackle this,” said Captain Joe Kessler in a September CPC meeting. He called for more specific definitions of whether an officer should bring the equipment home with them or not.

For a department desperate to gain the trust of the public, sending a consistent message that the public is the priority is hugely important. As the OPA finding against Espinoza said, "As a visible, in-uniform representative of SPD, although being paid by a private employer at the time of the incident, the Named Employee had an obligation to conduct himself in a way that did not undermine public trust in the Department, the officer, or other officers."

Although overhauling secondary employment may not be the sexiest change, it is significant in rebuilding that trust that officers have the public's back.