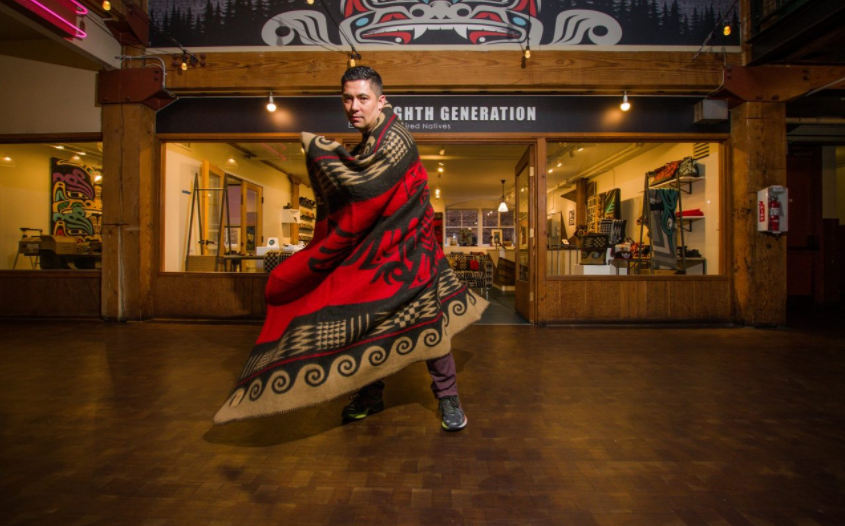 This story originally appeared in Ampersand magazine, a product of Forterra.

A wooden Sasquatch sculpture, 7-feet-tall, stands guard in the Pike Place Market atrium where tourists, in their shorts and sunhats, pose for photos. Locals, in their shorts and baseball caps, tune out with ear buds and Facebook. It’s airy and bright in here, a cool sanctuary with a steady stream of people coursing through looking for a clean restroom, the elevator or perhaps an Honest biscuit.

Apart from the biscuits, the atrium’s retail shops also offer an assortment of T-shirts (zombies, skeletons, honey badgers), incense and prayer flags, crepes and, according to one exuberant visitor, “Oh honey, look! Beer!” As we all know, it’s hard to name what you can’t find at the iconic, bustling, uberly-photogenic Pike Place Market but here you go: Native art made by Native people in a Native-owned store.

Enter Louie Gong, a boyish-looking 42-year-old who is Nooksack, Chinese, French and Scottish, and partial to jeans, T-shirts and sneakers.

“I want people to come here and to see that we are skilled professionals kicking ass,” he says in a tone way more matter-of-fact than grandiose.

Gong is standing in an empty retail space once occupied by Our Fabric Stash. The west-facing windows look down onto Post Alley, home to that stickiest of tourist meccas: the gum wall. Now these windows, the cement floors, the exposed wooden beams are all Gong’s, his future bricks-and-mortar Eighth Generation store.

"French doors here,” Gong told me one day earlier this summer, when the place was still under construction. “Galapagos blue paint for the floors. Track lighting. A couch over here.” One half of the space will be for retail items: prints, greeting cards and purses all printed in bright designs that weave traditional Native designs with more contemporary ones. The other half of Eighth Generation will serve as a high-tech meeting hub for additional Native artists to show the world their own creative kickassery.

"We will take control of the narrative that visitors get about the Native community,” says Gong. No more relegating Native people as merely historical figures. “Or that we’re charity projects. Or that we’re thought about only when people talk about the environment.”In the city’s most iconic public gathering place, on Coast Salish land, Gong is creating space for Native artists and their work.

Gong grew up on a reservation in Ruskin, B.C., in a house with no running water. Since the age of 14, he’s been largely on his own, living on the Nooksack reservation in Bellingham, going to Western Washington University to study counseling, doing educational counseling at the University of Washington, and eventually landing at Muckleshoot Tribal College. Along the way, Gong did two things that would eventually and dramatically alter his life: He started talking deeply and honestly about his own mixed racial identity. And he started drawing bold, graphic designs on shoes.

The shoes were plain slip-on Vans that Gong tricked out with markers, marrying a kind of street-art aesthetic with Coast Salish imagery (ovals and crescents) and Asian themes (phoenixes and dragons). Sam Morseau remembers touring with some Native high school kids at the tribal college years ago when they came upon Gong working on a design.

“He was sitting with his Sharpies and some Vans,” Morseau recalls. “He told us this wonderful story about walking in two worlds. I got his contact info and I asked, ‘How would you like to put on a workshop?’”

Morseau at the time was working in the Kent School District and he immediately saw how Gong and his artwork connected with his high schoolers. “‘The shoe guy.’ That was the talk of the whole visit,” Morseau says. The workshops happened. The custom-designed shoes became hugely popular — and Gong’s first retail item. Suddenly Gong was both businessman and an even more popular guest speaker, someone who could talk racial identity through a pair of shoes. He’d deliver as many as 36 speeches a year.

As Gong expanded his artwork to different retail products — baseball caps, cell phone cases, earrings — he saved up his speaker’s fees so he could launch his most celebrated item: 100 percent wool and 100 percent cotton blankets, the first mass-produced line designed by Native artists and sold by a Native-owned company.

To gift a blanket to someone, as Native people routinely do, is to offer acknowledgement, appreciation, warmth and a recognition of someone’s success — a kind of contract that says, We will take care of you. Blankets are meant for wrapping around one’s shoulders and until Louie Gong arrived, Portland-based Pendleton was the go-to source for these kinds of “honor blankets” throughout Indian Country.

Gong owns, oh, about seven Pendletons — all gifts. Lying on the couch one day he did the math in his head and calculated the price of blankets inspired by Native designs that are sold back to tribal members. “Cultural appropriation,” he concluded. “Economic injustice.” The century-old Pendleton sells blankets, according to its website, that are Native American inspired; designed in collaboration with Native artists (Seattle’s Preston Singletary, to name one); and whose proceeds (a percentage) benefit the American Indian College Fund. They’re made in the U.S. Gong’s Eighth Generation blankets, which began selling one year ago, are either designed by him or by another Native artist (Michelle Lowden, Sarah Agaton Howes); 5 percent of all proceeds fund grants for other Native artist entrepreneurs; and they’re manufactured in China and in the U.S.

“We produce some of our blankets overseas, which is at odds with Native artists whittling sticks or old women hovered over looms,” Gong says. In other words, Gong’s business goal is to create something on par with any other mainstream entity except, of course, that by his own nature his every move busts the stereotype of entrepreneur or artist or Native American.

Gong reaches into his jeans pocket. A chime has gone off on his cell phone. The noise signals an item has been purchased from the Eighth Generation website. Someone in New Mexico has bought a Woodlands floral blanket, the black one with vines of strawberries and blueberries and blades of wild rice. You can see it for yourself at the Eighth Generation store, which opened in August.