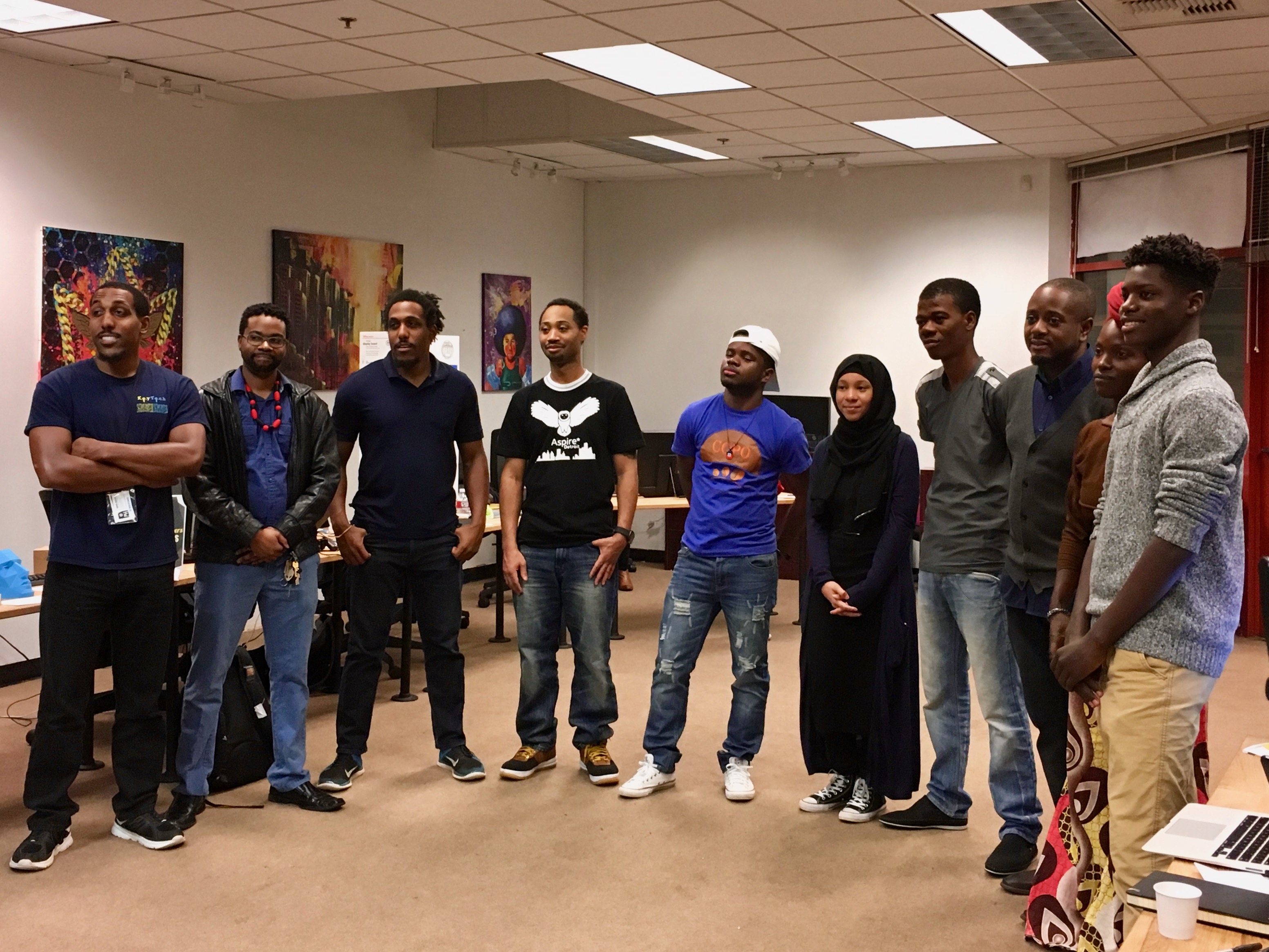 “How might we create fertile ground for the African-American community to grow with the city’s current tech boom?”

That’s the question that David Harris posed at his first weekend hackathon, dubbed Hack the CD (a venture he launched in partnership with Startup Weekend after he won Crosscut’s Community Idea Lab in 2014). The weekend spun out ideas for several startups, including community-based crowd lending for minority-owned businesses and educational ebooks on prominent African American figures for 2nd-6th graders.

As K. Wyking Garret, Aramis Hamer, Monica Washington, and Mujale Chisebuka brainstormed about this question, however, they realized that the best ideas won’t go anywhere without the means to put them into action. “People needed community to continue past the weekend,” Wyking explained.

So they formed Black Dot Union, a community and resource center for creators, technologists and entrepreneurs in Seattle’s historically black Central District that opened its doors a year ago.

Black Dot is essentially a co-working space. A monthly fee of $40 gives members access to the building, along with workshops led by mentors and coaches who can help get their ventures up and running. But it also strives to be an ambassador for Seattle’s black innovators at large.

On the first day of Seattle Startup Week earlier this month, Black Dot hosted a startup expo to showcase some of the Central District’s most promising entrepreneurs. Eight entrepreneurs showcased their work.

Khabirah Weddington is working on a website to connect Black Student Union (BSU) organizations at schools across the city, which she hopes will also make it easier for schools without an existing BSU to form one. Twin brothers Adam and Andrew Powers presented an accelerator program to expand their existing nonprofit, Key Tech Labs. The new program, called Moor House, is a six-month residential coder house for people from communities that are underrepresented in tech, where they’ll learn technology skills that could help land them a job in Seattle’s tech world. Other presenters included Sam Hightower of 3D Buildtower, a company that provides 3D printing, and Stephane Prophete of Copo, a Haitian coffee startup.

“A lot of times Seattle Startup Week is extremely white — we’re like inkspots in the room,” said Kenny Shelton, Entrepreneur in Residence at Hack Nation, the organization that puts on Hack the CD, who also helped with the expo. “So with this, we’d like to turn it on its head and bring Seattle Startup Week to the Central District, which is a historically black neighborhood, and kind of showcase what the black neighborhood is working on and what these black innovators have going on.”

It’s no secret that the tech field has a pretty big diversity problem. Less than one percent of the technical workers at Google, Microsoft, Facebook, and Twitter are black. But Black Dot is not only focused on improving the pipeline for the African-American community into the tech world. They are also taking a stance against a well-known side-effect of Seattle’s growing tech industry: gentrification.

While the Central District was once over 70 percent black, much of the established community has been priced out over the past couple of decades. Today, the black population makes up less than 20 percent of the neighborhood.

Black Dot’s building, at 23rd and Union, is located in the heart of gentrification in Seattle: next to Earl’s Cuts & Style, a community institution that’s been around for 24 years but is now struggling in the wake of a changing neighborhood, and across from Uncle Ike’s Pot Shop, which has been the target for protests by those who see the shop as a symbol of white business owners now profiting from selling the same product that has put so many people of color behind bars. Black Dot’s founders intentionally chose the location because it’s at the crossroads of this ongoing tension.

“23rd and Union has been an epicenter of the African-American neighborhood,” Garret told Entrepreneur. "My grandfather was a cofounder of one of the first black banks west of the Mississippi, and it was right there on that commercial strip."

He added that Black Dot is located on "one of the last large full-block tracts of undeveloped land, so we’re part of efforts to acquire, purchase and redevelop that block in a way that is inclusive of our community.”

By focusing on shaping the narrative of one particular corner of the city, perhaps Black Dot will be able to help rewrite the commonly told narratives of who launches businesses and startups, or even who gets hired for Seattle’s technical jobs, as well.